You are here: Home / Rivers / Europe / The Elbe River 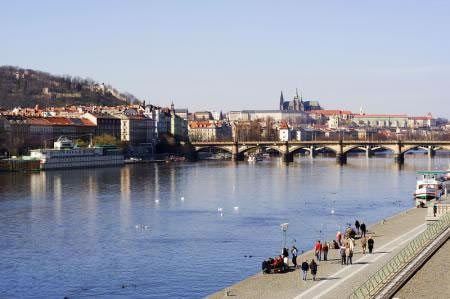 River cruisers make their way from Berlin to Prague

The Elbe river runs 725 miles from the Czech Republic to the North Sea. Most week-long Elbe itineraries are between Berlin and Prague and include hotel stays at one or both ends of the cruise. Other ports often include Potsdam, Magdeburg, Wittenberg, Meissen, Dresden, and Konigstein.

The German poet Goethe called Prague, “the prettiest gem in the stone crown of the world,” and indeed the capital of the Czech Republic is remarkable. The city’s rich architectural heritage reflects an urban life extending back more than 1,000 years. Prague’s highlight is the Charles Bridge, which crosses the Vitava River. On one side is Prague Castle, dominating the left-bank region.

Konigstein and its dramatic fortress, 1,180 feet above the river, provide a scenic backdrop for brief visits, while farther along Dresden is known as the “Florence of the Elbe,” for its art treasures.

Meissen is known for its porcelain, while Wittenberg marks the birthplace of the Protestant Reformation. In 1517, Martin Luther, an Augustine monk and university lecturer, nailed his 95 theses on the door of the Palace Church.

Magdeburg is situated midway on the Elbe. Nearly destroyed during World War II, the rebuilt city is an example of a traditional German town. Ships usually moor in Potsdam for transfers to and from Berlin at the beginning or end of each cruise.

Only One Choice On The Elbe River

Only one company does the Elbe river effectively, CroisiEurope. On Viking, for example, you won’t cruise much, if at all. You’ll be bussed around from place to place and stay on the ship overnight. AmaWaterways pulled out from the Elbe. One Company Exits The Elbe & Another Enters: Should You Consider An Elbe River Cruise?

CroisiEurope’s paddlewheelers can cruise right into the center of Passau from Berlin. See Elbe Princesse: Summing Up

CroisiEurope is French, family-owned and operated. CroisiEurope’s all-inclusive product impresses us with its French flair and innovative designs. The company serves up one of the best values in river cruising. But CroisiEurope is not for everyone. See my story: Is CroisiEurope Right For You?