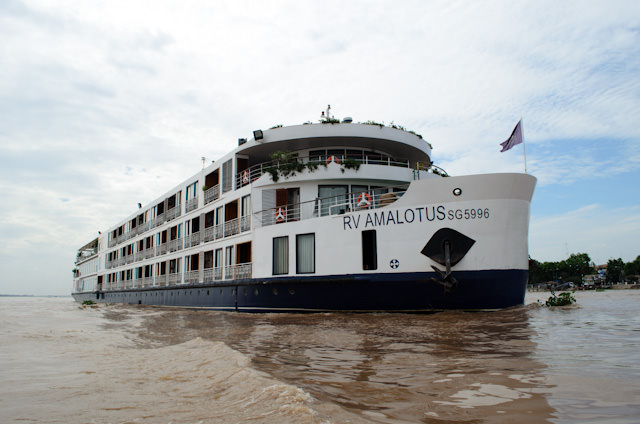 This morning, guests aboard AmaWaterways’ AmaLotus awoke to the sights and sounds of Tan Chau, our first port of call in Vietnam since crossing the border from Cambodia yesterday.

On a voyage that has provided no shortage of original experiences, our day in Tan Chau was to prove to be no less influential. To properly show us around, we met our new local Vietnamese guides who would stay with each of our respective colour groups until we arrive in Ho Chi Minh City on Monday. 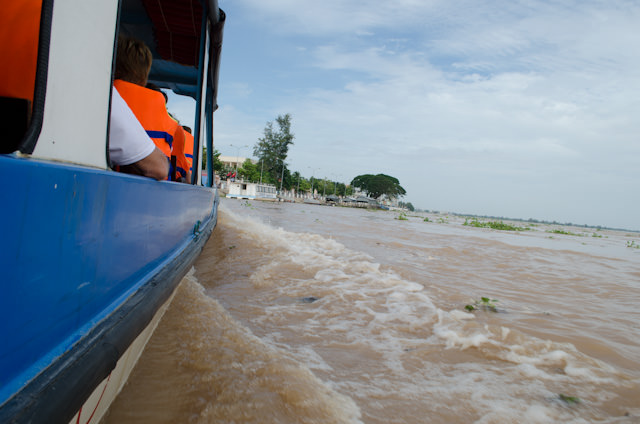 Exploring the Mekong by motorized boat, en-route to a walking tour of a small local village. Photo © 2013 Aaron Saunders

After another fantastic breakfast aboard the AmaLotus, guests set out in staggered groups of two on our adventures. As part of the Blue Group, our tour took us first for a riverboat cruise through the narrow channels that weave in and out of the numerous floating villages that line the river banks. As it is the rainy season here in Vietnam, these floating villages are essential in order to keep up with the massive fluctuation in water levels that occurs between the monsoon and dry seasons. 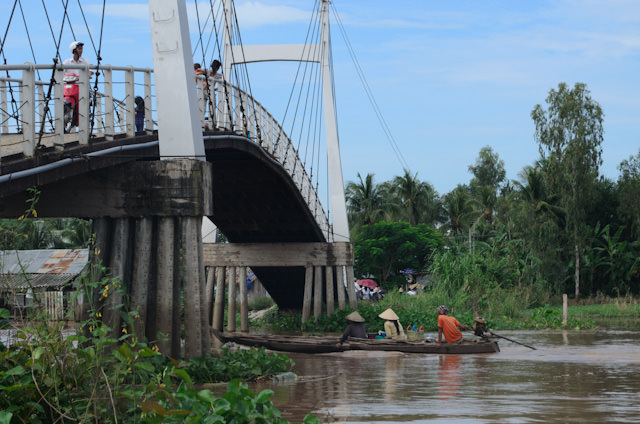 Vietnam is an interesting mix of modern technology and old-world ways of life. Photo © 2013 Aaron Saunders

The Mekong is also remarkably fast-flowing at this point. When disembarking AmaLotus today at her mid-stream anchorage, the currents were rushing by with such force that it looked like the ship was making a steady six knots despite being completely immobile.

Our first stop was a traditional rural village where the schoolchildren raced across a modern-looking suspension bridge in order to greet our vaparetto-style boat as it arrived alongside the riverbank. 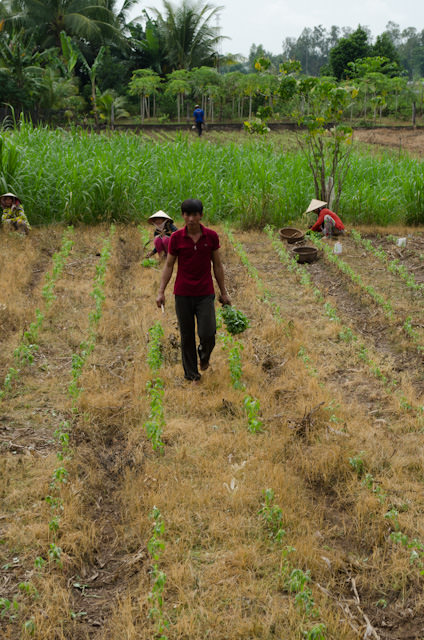 Working the fields, much the same way as it has been done for centuries. Photo © 2013 Aaron Saunders

Many of the buildings in this town are simple, and chickens, roosters, and other animals are a common sight. The entire village relies heavily on agriculture, but as with Cambodia, look closer: even the simplest tin and aluminum structure will have a television set within, its signals derived from the flat-gray satellite dishes mounted to the roofs. 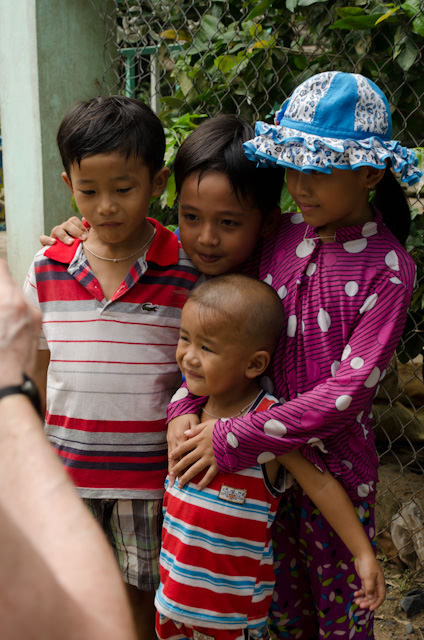 The best part of walking through the local villages of Vietnam: the kids, who speak excellent English are are genuinely excited to see tourists. Photo © 2013 Aaron Saunders

Guests aboard the AmaLotus are encouraged to bring school supplies like pens, pencils, crayons and notebooks to give to the school children they will encounter along their journey, and to refrain from simply giving them money. As our local Vietnamese guide explained today, giving the children money teaches them that they do not have to work for it. Instead, utilising pens and pencils (or other supplies) as gifts ensures that the children are being given additional tools with which to learn. 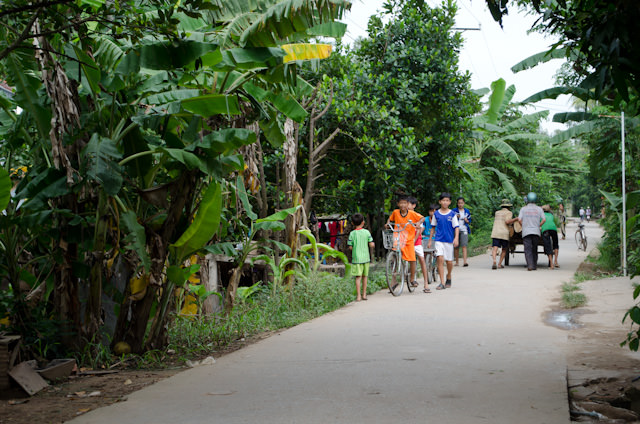 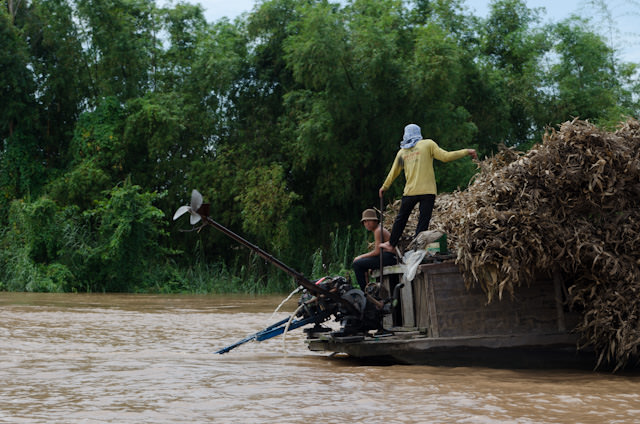 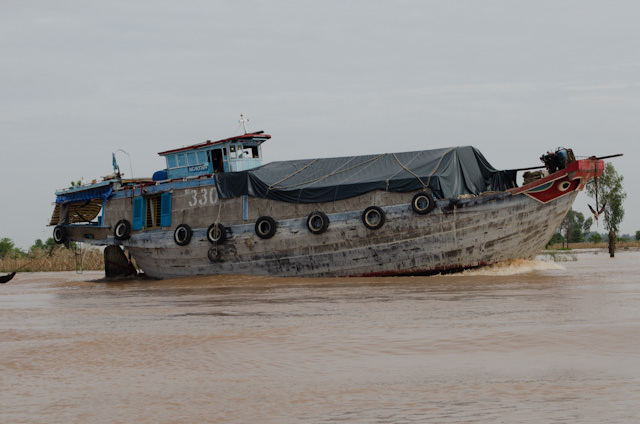 A North American child of five or six might be non-plussed by colourful pencil crayons. These kids – all of whom spoke perfect English and went around introducing themselves to all of us – lit up like they’d won the lottery when the first guest produced a few colourful pencil crayons. That’s the thing about people here in Vietnam. Like Cambodia, they are nothing if not appreciative. 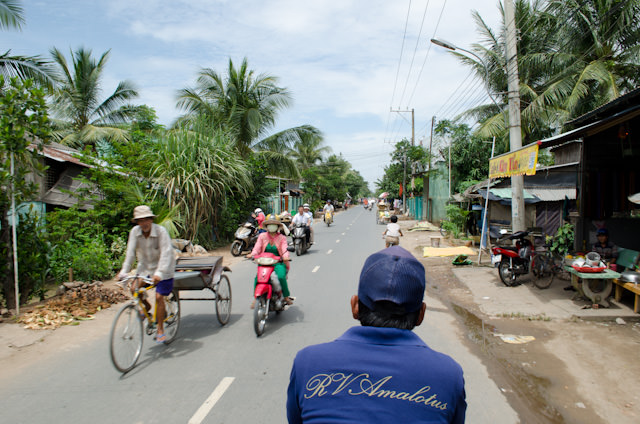 Following our walk through the village, we were able to enjoy a traditional xe-loi – or rickshaw – ride through Tan Chau. AmaWaterways staggers each tour group so that there are never 124 guests in the same place at the same time, which provided us with the opportunity to take photos of our fellow passengers as they zipped past, heading the opposite direction on their very own rickshaw. 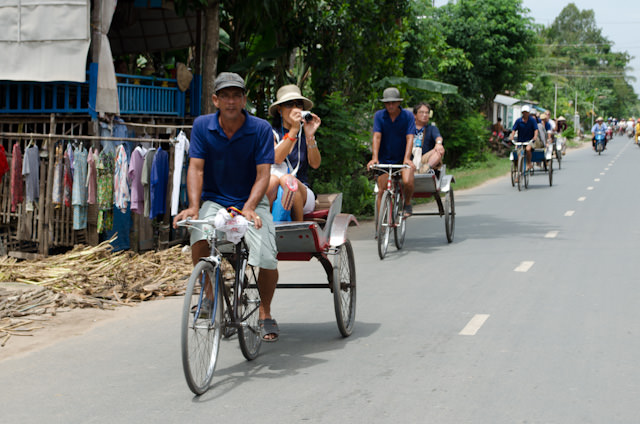 Guests from the Green and Red groups zip along past us, headed in the opposite direction. Photo © 2013 Aaron Saunders

Our first stop was at a factory that makes baskets and rattan mats – and it was like stepping back in time to the industrial revolution. Machines made entirely of steel and moving parts clank and whirr back and forth in narrow, confined spaces. A cacophony of sound reverberates off the tin roofs and wooden walls, and the temperature inside ratchets up a dozen degrees from the already-sweltering heat outside. 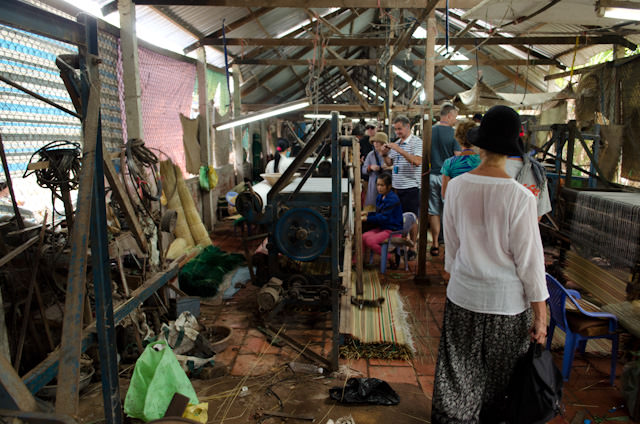 Inside the rattan mat-making factory. There are no computers or automation here. Photo © 2013 Aaron Saunders 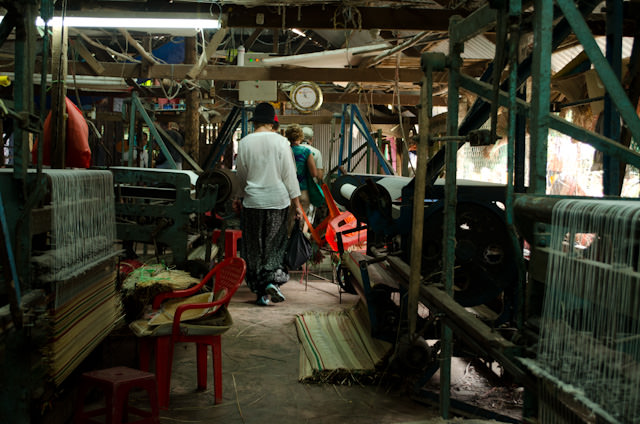 Machines are constantly in motion in a way that people just don’t normally see in North America or Europe. Photo © 2013 Aaron Saunders 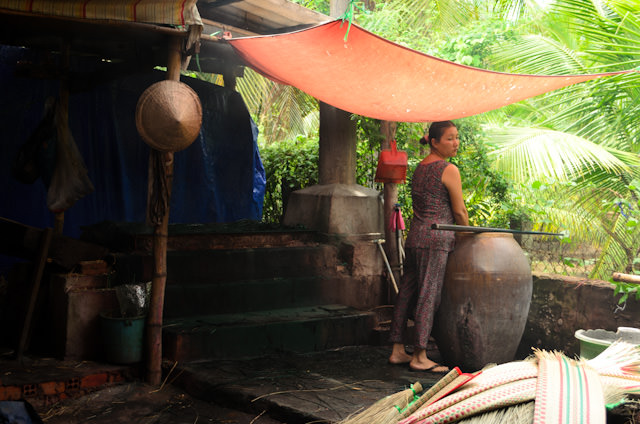 Much of what is manufactured here is still done by hand, and AmaWaterways guests got a first-hand look at daily work life in Tan Chau. Photo © 2013 Aaron Saunders

In a world where the term “factory” conjures up visions of automation and robots in many Western countries, nearly everything here is either done or controlled by hand.

The same was true of our visit to a silk-weaving factory, where looms moved back and forth with rapid precision. They’re traditional looms, though mechanically driven. Gears spin, wooden beams click and clack against each other, and the massive warehouse that houses these machines buzzes with sound and motion. 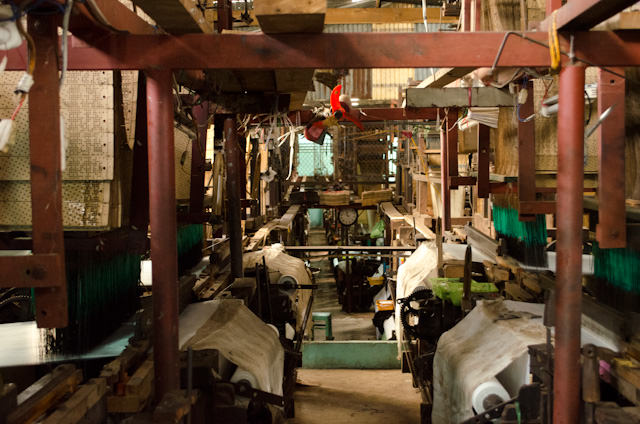 Row after row of looms at the silk weaving factory in Tan Chau. Photo © 2013 Aaron Saunders 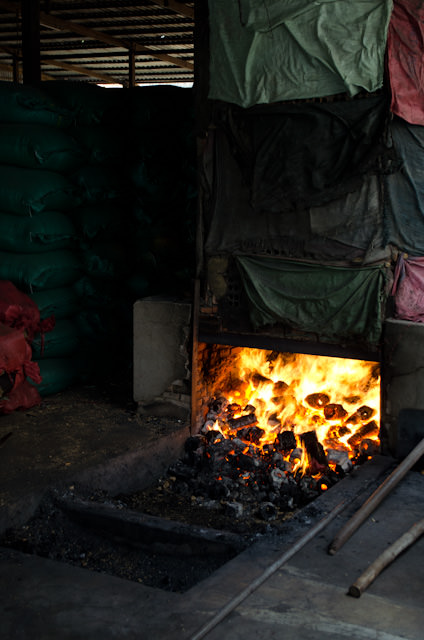 The heat coming from this local metal forge furnace was astonishing in an already-sweltering Tan Chau. Photo © 2013 Aaron Saunders

The logistics of arranging all of this must be mind-boggling. The factor visits alone would be enough, but AmaWaterways has provided this rickshaw transportation to and from each factory, and then again back to the ship. It’s an amazingly fun way to travel, but seeing over 60 rickshaws make their way through the streets of Tan Chau certainly helps reveal the lengths the line has gone to in order to ensure their guests have an authentic experience ashore. 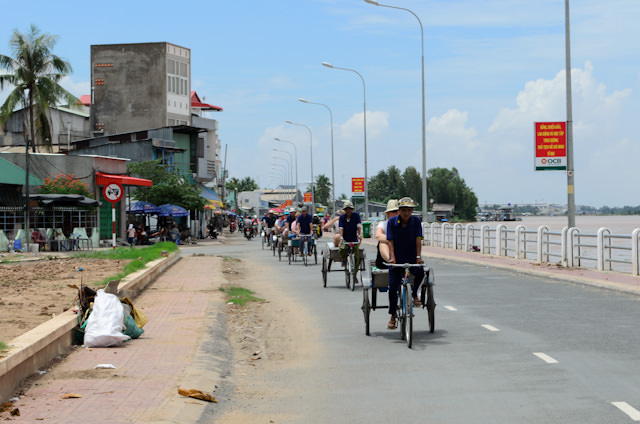 Racing back through the streets of Tan Chau by rickshaw to the waiting AmaLotus. Photo © 2013 Aaron Saunders 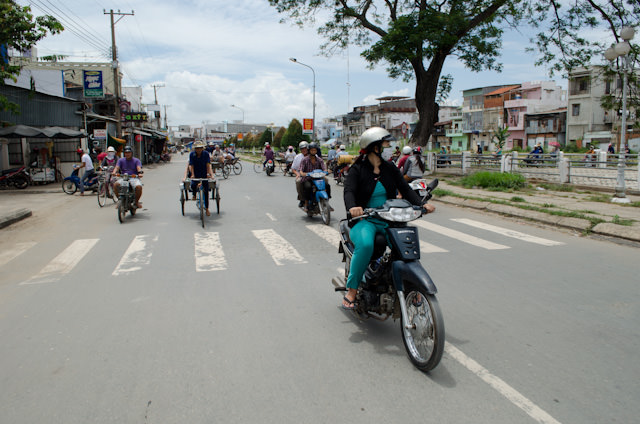 Once we’d left our rickshaw drivers, we motored by boat back to the AmaLotus, which was waiting for us mid-stream.

Here’s a look at what’s happening today aboard AmaWaterways’ AmaLotus:

Our days onboard the AmaLotus are nicely staggered for the most part, with relaxation time blended in with active adventures ashore.

This afternoon, for example, I enjoyed some time relaxing in the Saigon Lounge, catching up on my reading and writing this post. In fact, I was in the Saigon Lounge for the better part of the day, as the afternoon transitioned into evening and our informative Vietnamese Q&A turned into Cocktail Hour, which turned into the daily briefing on tomorrow’s events. 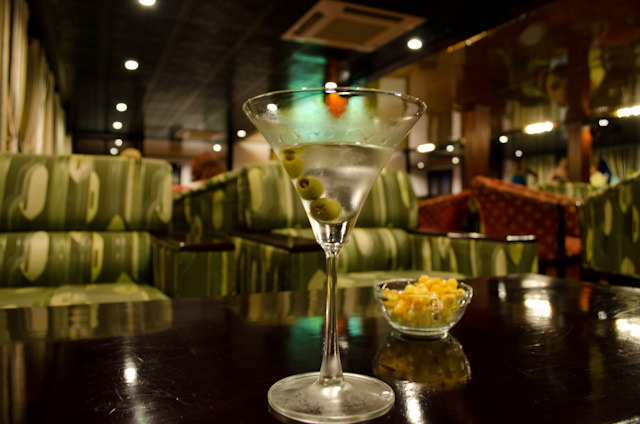 Relaxing with a drink in the Saigon Lounge. Photo © 2013 Aaron Saunders

A real event onboard, though, is dinner. Each night, some of the best meals I’ve had onboard a ship are served up in a fantastic multi-course affair that usually lasts two hours. Conversing with other guests is a huge part of the appeal of this, and the time literally flies by. North American fare is served alongside local specialties, but I’d personally encourage everyone to try every local dish on the menu. The soups, in particular, are fantastic! 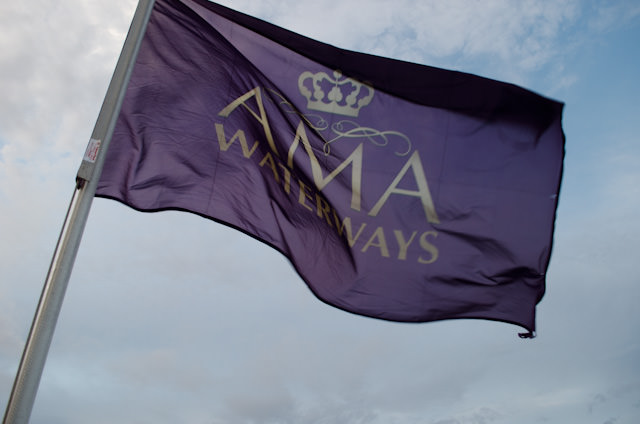 After dinner, it’s up to the Saigon Lounge for a quick drink and some conversation before turning in. It’s a great chance to chat with new friends about what they have enjoyed most about each day on this trip; one where it seems each passing day provides as many enriching experiences as the last. 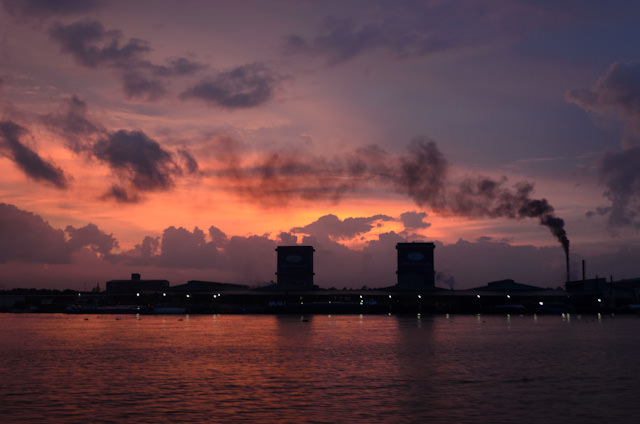