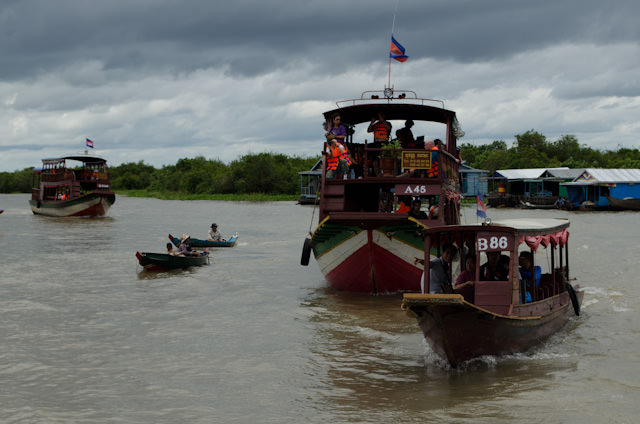 One of the most memorable embarkations ever: a flotilla of ships whisked guests to the waiting AmaLotus on Tonle Sap Lake. Photo © 2013 Aaron Saunders

If I could describe today in a single sentence, it would be this: today is the first day of the rest of your life. When I landed in Siem Reap, Cambodia last night prior to embarking AmaWaterways’ AmaLotus this afternoon, the city was cloaked in darkness. But by noon, I had seen and experienced more than I ever imagined possible. 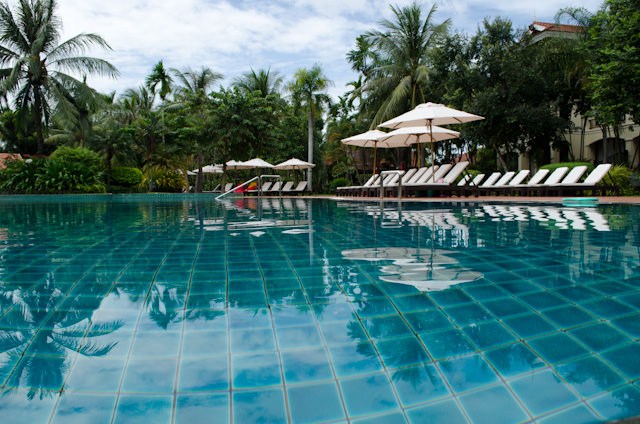 Need to beat the heat in Siem Reap? Head over to the inviting pool at the Sofitel Angkor. Photo © 2013 Aaron Saunders

After a relaxing night at the Sofitel Angkor in Siem Reap, I awoke to a beautiful day with an average temperature of 33 degrees Celsius and partially cloudy skies. It’s hot here, to be sure, but manageable at this time of year.

Breakfast at the hotel was a feast for the eyes and the tastebuds. Not only did they have a huge assortment of things to choose from – fruits, meats, cheese, pastries – they also had omelette stations, traditional Cambodian specialties and even miso soup. The property also makes their own yogurt and detox juices like pineapple with ginger and lemongrass. 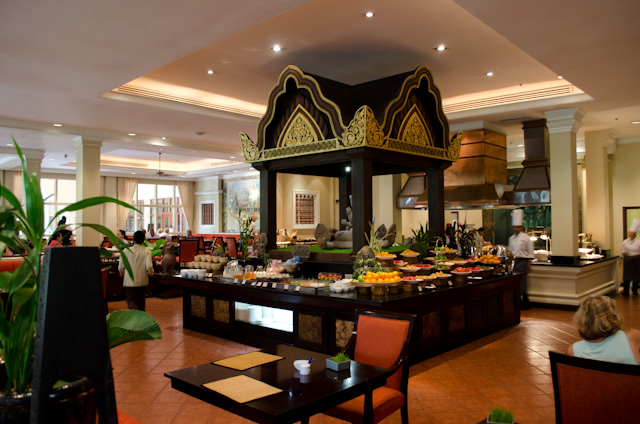 Breakfast at the Sofitel: a great blend of North American and Asian-inspired foods. Photo © 2013 Aaron Saunders

Coffee is served in a French Press, and the service is very personable. I also appreciated that their Sous Chef took the time to explain to me what dishes contained nuts – which I have an allergy to – and which were fine for me to eat.

At 11:00am, registration opened for guests to check-in for the transfer to the AmaLotus. By noon, guests were divided up into four groups and four separate coaches for the 19 kilometre journey to Tonle Sap Lake. 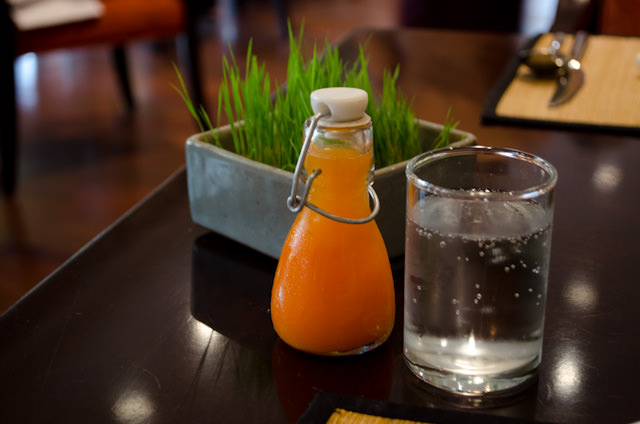 On our journey, we saw the effects of recent heavy rains, with one road that had turned into a raging river. Most of the humble abodes here are constructed on stilts, with their main living quarters placed roughly 20 feet off the ground. It all starts to make sense once you learn how frequently this type of flooding occurs during the monsoon season. 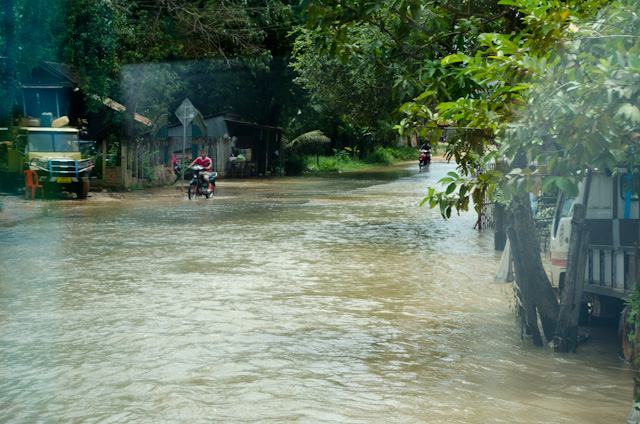 After leaving Siem Reap, we encountered roads that had been washed out by heavy rains in recent days. Photo © 2013 Aaron Saunders

Around 1pm, we arrived at Chong Khneas, which sounds like “John Cleese” when it’s pronounced. Over 1,000 families call this small village home, living in floating houses along the lake. They need to be able to float – and to move – to deal with the vast quantities of water here. In the dry season, Tonle Sap Lake spans 250 square kilometres with a depth of 1.50 metres. During the rainy season, that balloons to 12,000 square kilometres with an average depth of 12 metres. 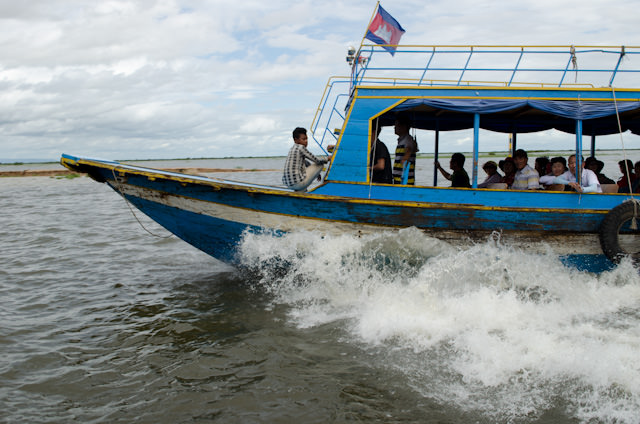 Our journey to the AmaLotus took us past boats of all shapes and sizes, some of which travel faster than others! Photo © 2013 Aaron Saunders

Our 30-minute sail-out to the AmaLotus was a real treat. As our flotilla of four ships zipped along, small makeshift boats would come alongside. A young kid – usually maybe eight or nine years old – would jump onboard with a cooler of soft drinks to try to entice people to buy them. Once he’d made his rounds, he’d jump back off our ship onto the little skiff that had been running alongside, manned by either Mom or Dad. 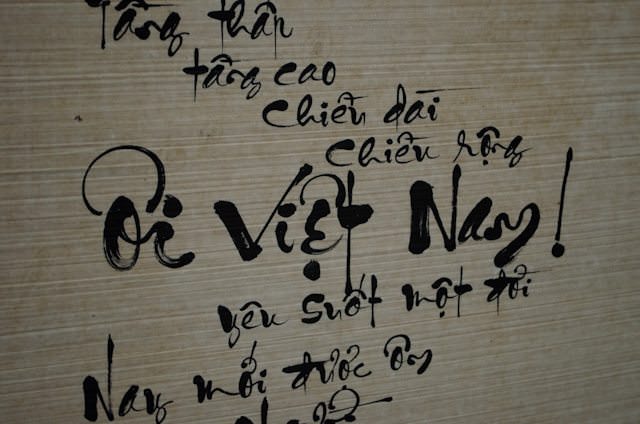 Motorized skiffs would run alongside us as we made our way to the AmaLotus. Photo © 2013 Aaron Saunders

A few boats that zipped up to us had kids sporting something different: large pythons coiled around their arms, looking for one dollar for a photograph with the snake. Presumably, the kid would jump onboard, though this never happened to us. As Indiana Jones once famously said, “I hate snakes.” 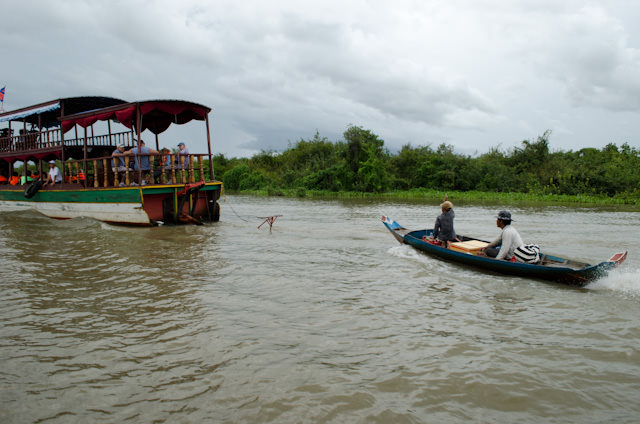 A skiff races toward one of the ships taking guests to the AmaLotus. Photo © 2013 Aaron Saunders

The AmaLotus was launched in 2011 as AmaWaterways’ second ship along the Mekong, complementing the La Marguerite that continues to operate this itinerary on select dates. Decorated with Colonial touches and traditional Khmer artifacts, the ship exudes a warm and inviting feeling the second you step onboard. 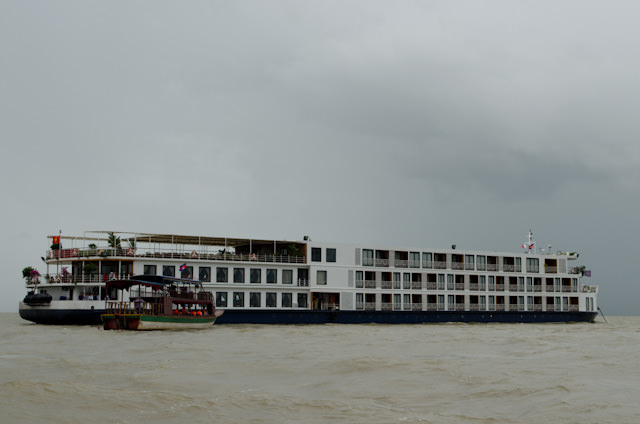 Coming alongside the AmaLotus for the first time. Just think of how our luggage got here! Photo © 2013 Aaron Saunders 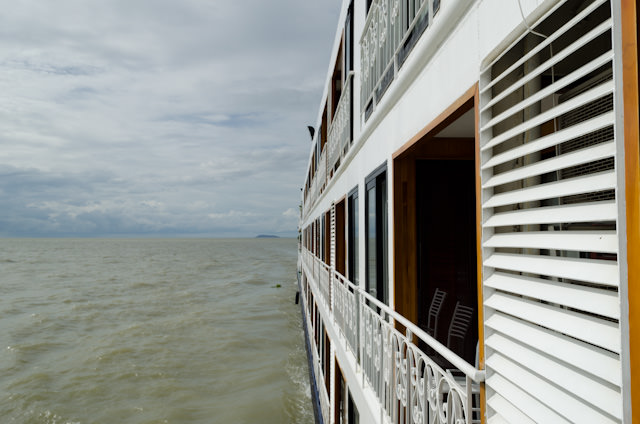 We were welcomed with a refreshing cold facecloth before attending the Welcome Aboard meeting held in the Saigon Lounge on Saigon Deck. Here, Hotel Manager Truong Tran outlined the procedure for the day, which wasn’t difficult to follow: lunch, followed by a relaxing cruise across Tonle Sap Lake, followed by the Muster Drill at 5:30pm. Cocktails in the Lounge would occur one hour later, with Captain Duyen Nguyen’s Welcome Dinner in the Mekong Restaurant at 7:30pm. 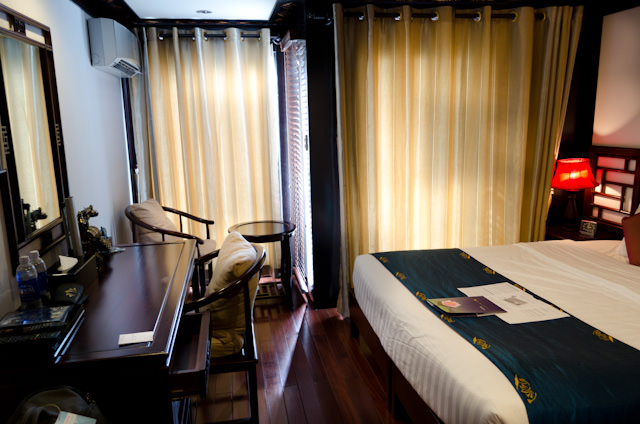 My stateroom, a Category A room on Deck 2 featuring both French and step-out balconies. Photo © 2013 Aaron Saunders

My Category A stateroom is very spacious, though I have to admit it doesn’t quite feel as big as the 226 square feet that are listed in the brochure – but then again, the bathroom is twice the size of most river cruise vessels, and it also sports both French and full walk-out balconies. AmaWaterways has pioneered this feature for the past few years, and I personally love it. I find it too hot to sit outside, but I have loved having the French Balcony open to let a little fresh air in while I write. 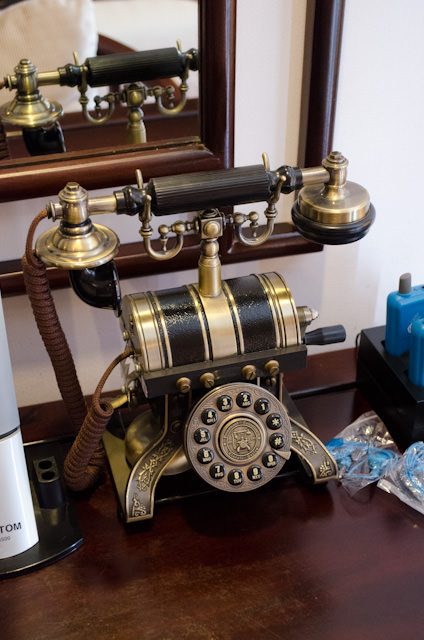 Other cool touches abound, like a modern telephone designed to look like an authentic period piece, complete with hand-crank. The ringer is even an actual bell! Surprising niceties include both North American and European-style electrical outlets; bathrobes and slippers; and DVD players that can be used to play a variety of complimentary movie titles.

Two interesting discoveries, both relating to the toilet. One, it’s a “normal” house-style toilet and not the vacuum-suction type more commonly found aboard ships. Two: it has a nozzle next to it, apparently allowing the toilet to be turned into a bidet. At least, I think that’s what it’s for. 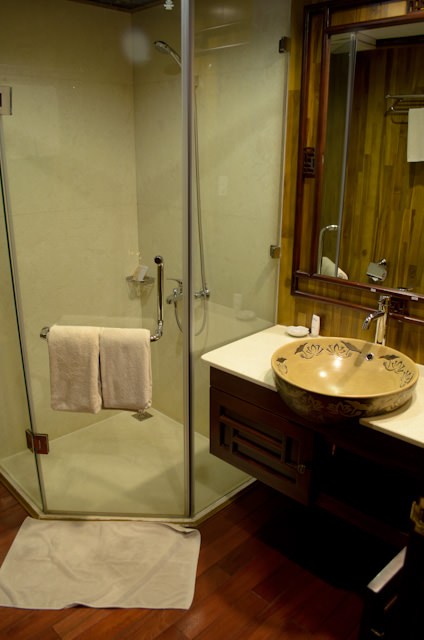 My bathroom aboard AmaLotus is far more spacious than those aboard most European-based river cruise vessels. Photo © 2013 Aaron Saunders

It’s also worth noting just how much is included onboard the AmaLotus: local beers, soft drinks, spirits, coffee and tea are available on a complimentary basis throughout the day, while complimentary wine is served during lunch and dinner. It’s truly fantastic to enjoy something as simple as a Coke out on deck without having to worry how much it’s all going to add up to at the end of a week. 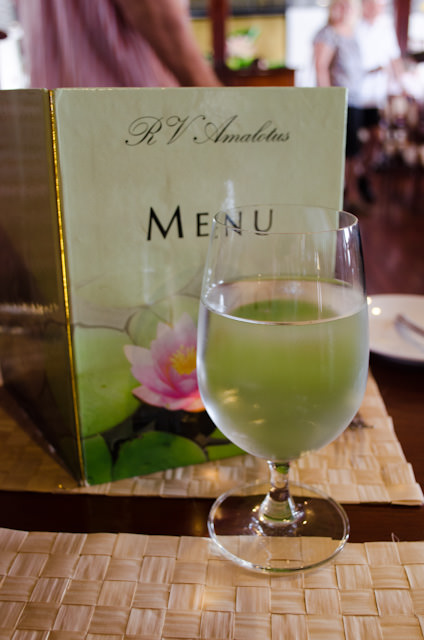 Getting ready for that first lunch onboard in the Mekong Restaurant! Photo © 2013 Aaron Saunders 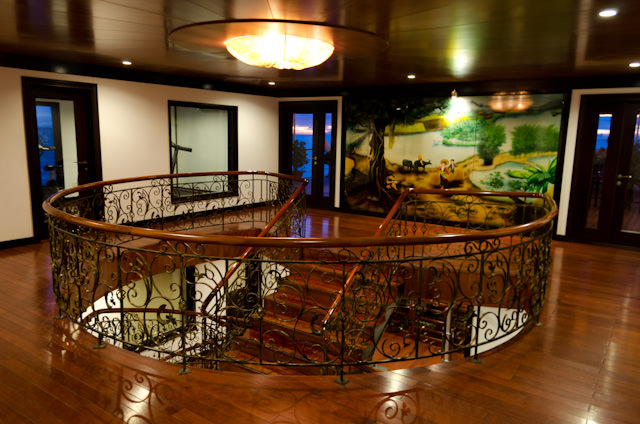 Throughout the ship, an attractive and inviting design is present. This is the Sun Deck landing of the main Atrium staircase. Photo © 2013 Aaron Saunders

As today comes to a close, I am once again amazed at the power of travel. It is one thing to read about a country; it’s quite another to actually go there. As with South Africa in January, I found many of my preconceived notions about Cambodia were totally wrong. I didn’t get assailed by dengue fever-carrying mosquitoes right off the plane; the “searing heat” was no worse than my visit to the Mediterranean in August (though let’s be honest: it’s damn hot!); and I’ve felt more unsafe in New Jersey than here. 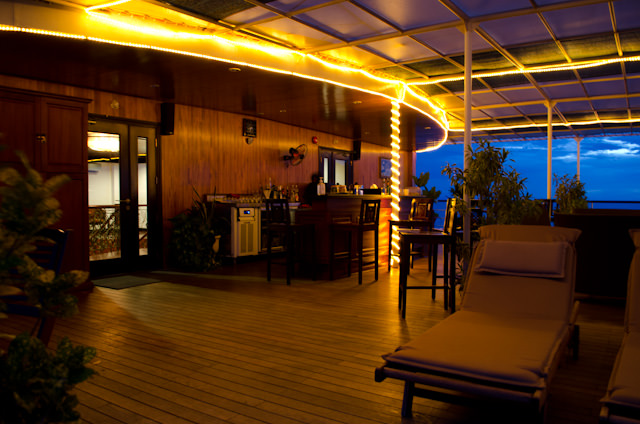 The Sun Deck Bar aboard the AmaLotus at dusk. Photo © 2013 Aaron Saunders

That doesn’t mean Cambodia is without its issues; the English Phnom Penh Post stated in today’s edition that the average minimum salary here is USD$80 per month. It also went on to describe how protesters at Phnom Penh’s Wat Phnom were violently driven back last night, shocked with electric cattle prods and pelted with marbles by police officers disguised in street clothing. Elsewhere in the country, uncertainty continues to grow over the fact that the current government lacks an opposition party.

In contrast, prior to leaving home, my local news station reported that people had queued up around the block before dawn to purchase the new Apple iPhone for a cool $800. We don’t realize how much we have, at almost any income level. 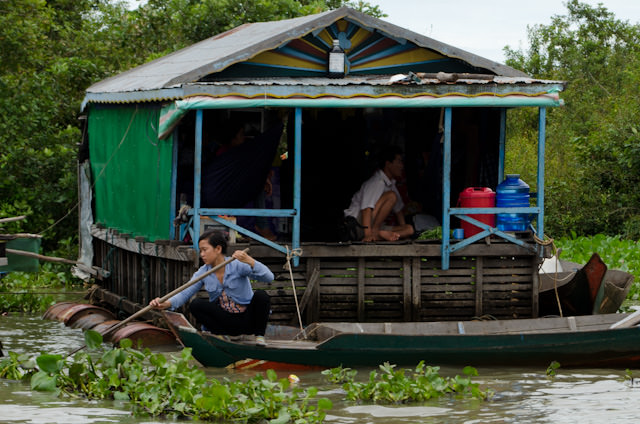 It does, however, make me question whether in North America we’re all just living to get the next brand-name fad that comes our way. I’ve never met more gracious people anywhere than the Cambodians, who continue to impress me with their pride and humility.

I have always had a soft spot for AmaWaterways, as I took my very first river cruise with them in 2011. But after today, I’m starting to think these trips along the Mekong might be their most important journey. 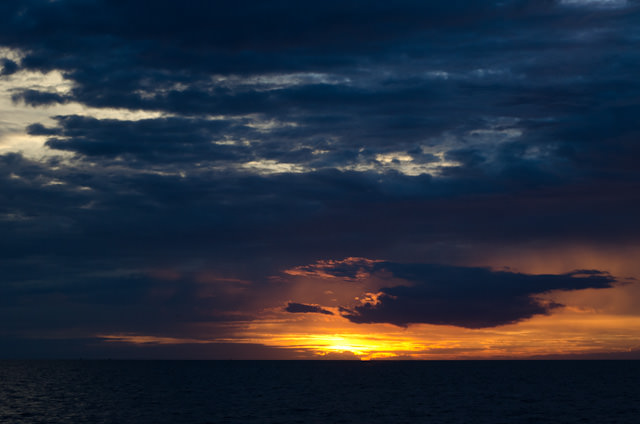