The brand-new Viking Longships are Viking River Cruises’ most ambitious vessels to-date. Offering an abundance of “must-have” features, these game-changing vessels have captured the imagination of river cruise travellers; so much so that in the summer of 2011, Viking River Cruises announced the original four-ship order would be increased to six vessels due to unprecedented demand.

Viking Aegir and Viking Embla will join sister-ships Viking Freya, Viking Idun, Viking Njord and Viking Odin as some of the most innovative ships plying the waterways in Europe when they are launched in the spring of 2012.

Environmentally friendly, these innovative vessels offer more of the amenities passengers have been asking for, like full-depth balconies in most staterooms, redesigned accommodations, and modern, stylish interiors crafted by Norwegian firm Yran & Storbraaten, who have been designing deep-ocean cruise ships for more than 20 years. 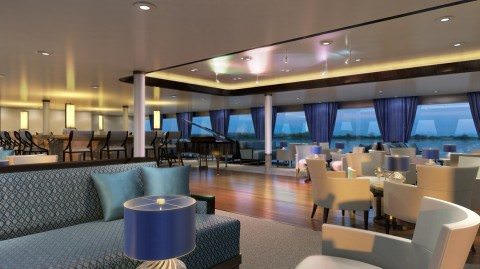 Notable among Viking Aegir’s public areas is the addition of a new indoor/outdoor lounge called the Aquavit Terrace. Featuring retractable floor-to-ceiling glass doors, the lounge can be used in any weather conditions and makes the perfect place to enjoy a drink and the company of new friends while admiring the stunning scenery.

Viking Aegir also features a main lounge and restaurant, both of which feature floor-to-ceiling windows for unparalleled views of the passing scenery. A library, Internet Centre and Reception area are also offered. On the uppermost level is the expansive Sun Deck, which boasts ample seating, including plenty of direct-sunlight and shaded options.