Launched in August 2011, MS Treasures is the newest member of the Tauck fleet. Photo courtesy of Tauck.

Tauck’s newest European riverboat will be named the ms Treasures. Built at the Vahali Shipyards in Gendt, the Netherlands, the ms Treasures will feature new beds and an enhanced cabin décor, both of which Tauck is implementing fleet-wide for 2011.

Following its christening in August in Germany, the ms Treasures will sail on five different Tauck itineraries, ranging from the company’s popular “The Blue Danube” cruise to its 24-day, transcontinental “Grand European Cruise.”

For 2011, the bedding in each stateroom will feature a modular design that allows two single beds to be combined to form a fully-integrated, king-size bed, and all beds will be outfitted with 400 thread-count Egyptian cotton sheets and Hungarian down pillows. 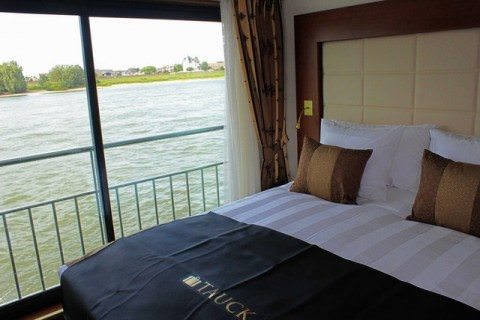 The ms Treasures will feature the same configuration of staterooms as the company’s other ships, with capacity limited to just 118 guests (versus 150 or more on other similarly sized vessels).  The new ship’s 59 outside-facing staterooms will include 14 suites and seven junior suites, or more than four-times the number of suites and junior suites typically found on other European riverboats, and 85 percent of all staterooms will have full floor-to-ceiling windows. 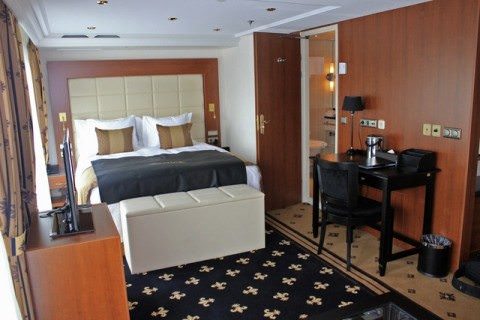 Suites aboard MS Treasures measure up to 300 square feet. Photo courtesy of Tauck

Each of the 300 square-foot suites on the 361-foot ship will feature French balconies, walk-in closets and marble baths with full size tubs.  The additional 45 junior suites and cabins range from 150 to 183 square-feet, while all staterooms will be outfitted with plasma TVs, mini-bars, terry cloth robes, radios, safes, individual air conditioning and L’Occitane toiletries.  Other onboard amenities include a 24-hour Jacuzzi, lounge and wellness center.  Along with a ship’s crew of 29, the Treasures also has an onboard staff of up to three Tauck Directors and one Tauck Cruise Director.

One feature that will actually be unique to the ms Treasures is a silver “Peace Dollar” that was recently welded into the ship’s hull.  In a tradition believed to have originated with ancient Roman seafarers, a silver coin was often placed in a ship’s keel during construction to assure good fortune.  Silver Peace Dollar coins were issued in the 1920s to commemorate the end of World War I.  In a nod to Tauck’s own traditions and heritage, the Peace Dollar affixed to the hull of the new ship was minted in 1925 – the same year that Arthur Tauck Sr. launched the company and brought the very first Tauck guests on a guided journey through New England. 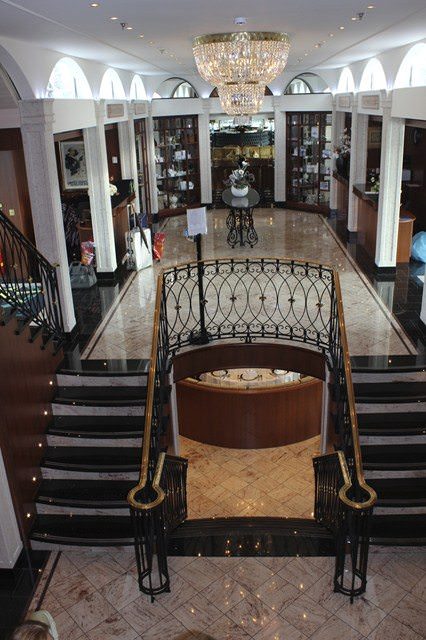 The sweeping atrium aboard the new MS Treasures. Photo courtesy of Tauck.

The expansion of Tauck’s fleet coincides with the ongoing expansion of its product offerings.  For 2011, Tauck is adding a pair of new cruises on the Rhone River, the 10-day “French Waterways & Vineyards”,  and the 14-day “French Escapade: Monte-Carlo to Paris” itinerary.  Tauck has also added more focused or niche river cruises recently, including two Christmas Market cruises, classical music departures of its Blue Danube itinerary, and family-specific river cruises as part of its Tauck Bridges collection of family trips. 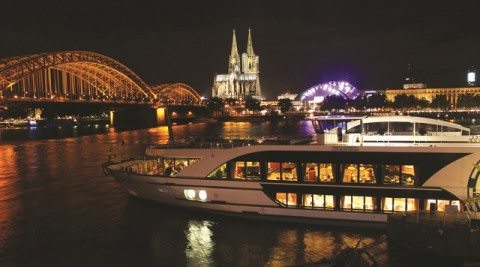 For 2011, Tauck is increasing its total river cruise departures by 30%, reflecting the fact that European river cruising continues to be one of the fastest-growing segments of its business.

Read all of our articles on ms Treasures.