CroisiEurope’s Cyrano de Bergerac was constructed in 2013 and sails the Gironde River. Photo courtesy of CroisiEurope.

CroisiEurope’s Cyrano de Bergerac was launched in 2013 and is the line’s newest vessel operating along the Gironde. At 361 feet in length, she is large enough to offer plenty of public rooms and amenities for guests to enjoy while onboard, but still small enough to provide the intimate river cruising experience that family owned CroisiEurope is known for.

She can carry a total of 174 guests in 87 staterooms. Her fleetmate Princesse d’Aquitaine also operates river cruises along the Gironde. 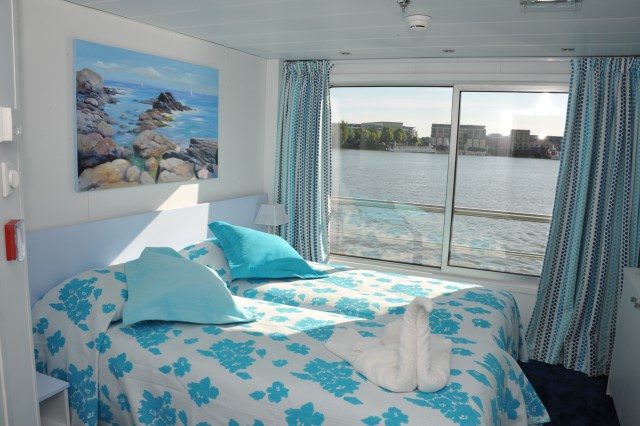 Staterooms aboard Cyrano de Bergerac are bright and fresh. Photo courtesy of CroisiEurope.

Each of the 87 staterooms available aboard the Cyrano de Bergerac are nearly identical in size and amenities. Their main differences lie in their physical placement on the ship’s two passenger decks.

Each stateroom includes a private bathroom with shower, toilet and sink/vanity area; a hairdryer, personal safe and a satellite television set.

CroisiEurope has also set aside one stateroom on Middle Deck for those guests with disabilities, conveniently located adjacent to the main Reception Lobby and Lounge. 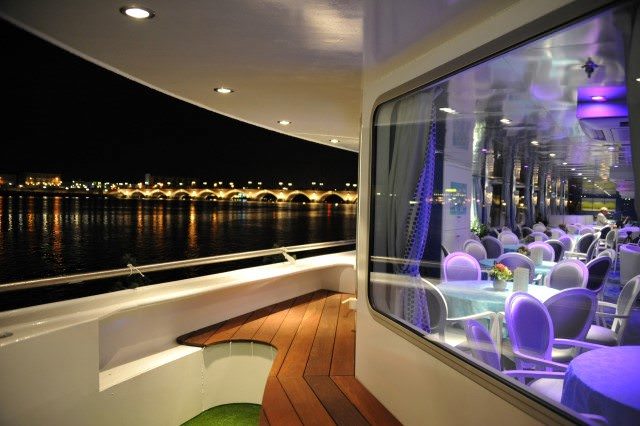 There are plenty of relaxing public spaces onboard Cyrano de Bergerac – including this attractive outdoor viewing deck. Photo courtesy of CroisiEurope.

Public rooms aboard Cyrano de Bergerac are split between two of the vessel’s four passenger-accessible decks.

A main Restaurant located all the way aft on Middle Deck serves up meals buffet-style for breakfast, with a set menu that changes daily for lunch and dinner. The Restaurant has an intimate feel and encourages a social atmosphere, with a variety of table sizes.

All the way forward on the same deck is the Main Lounge aboard the Cyrano de Bergerac. This features 180-degree panoramic windows that look out on the stunning scenery passing by. With a full-service bar, it’s a great place to relax and enjoy newfound company. The Lounge also features a decently sized dance floor that becomes well-used as the night wears on.

On Upper Deck is the Cyrano de Bergerac’s intimate aft-facing bar. A small terrace allows guests to step outdoors for a view of the retreating Gironde and the ship’s wake.

On the Sun Deck, located one deck higher, guests can admire the passing views of Europe’s most storied waterways with outdoor deck space that stretches from bow to stern.