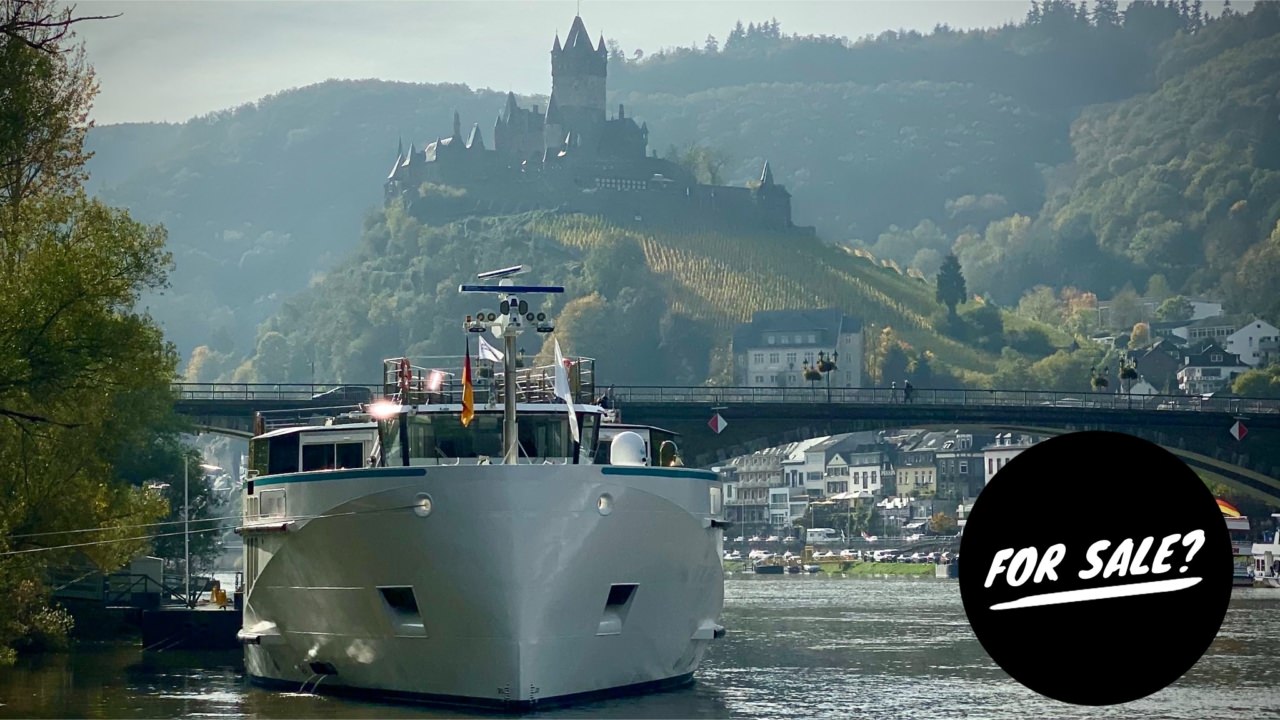 An alert reader brought to our attention this headline from Travel Weekly: Crystal River Cruise Ships Appear To Be For Sale. The trade publication’s June 28 article noted that five years after launching, Crystal Cruises apparently has put its river cruise fleet up for sale.

The Travel Weekly article, which you’ll find here, states that a Florida ship broker sent an e-mail to European river lines that the five all-suite river ships built by Crystal between 2016 and 2018 are currently “trading on the Rhine” and can “be developed for sale.”

Crystal River Cruises’ executives are mum about the potential sale of their fleet, commenting only that they are preparing for a resumption of sailings on August 29. In fact, I am booked on Crystal Debussy October 4 through October 14. Am I concerned about Crystal not operating that cruise? The short answer is no, but please keep in mind that this is only my opinion, not advice as to what you should do. Do your homework, protect your investment and make your own decision.

Clearly, the past year has been a difficult one for all travel companies. In the lead-up to the pandemic, Crystal’s parent company, Genting Hong Kong, expanded too rapidly in my view – buying German shipyards, launching ambitious plans for new ships and even purchasing jetliners. The amount of money Genting was spending made my head spin. And we all know what happens when leverage and hard times collide. In a filing last month the company noted that it saw “material uncertainties” that might cast “significant doubt about the group’s ability to continue as a going concern.”

Yesterday, Crystal announced that it was canceling newly announced Caribbean cruises from Antigua and St. Maarten. The reason: I suspect these cruises were under-booked. Crystal noted in its announcement: The recent positive developments of ships sailing from U.S. ports have prompted U.S. travelers to show an increased preference for more direct access to luxury cruise options, and we do plan to announce a new deployment for Crystal Symphony close to home later this week.

That same page of announcements highlights cancellations of select September to December 2021 Crystal River Cruises sailings aboard Crystal Bach and Crystal Mahler. I was originally booked on Bach. The company communicated with me in early June that my cruise would be shifted forward and would operate on a different (but identical) sister ship. I saw no cause for alarm, thinking instead the Crystal simply was navigating its way back onto the rivers. In fact, the new timeframe, in early October, was what I had hoped for when I initially booked the cruise. I had hoped to cruise the Moselle during the harvest season. So far, my cruise is still a go.

Given all the shuffling of ships, I see three possible scenarios for Crystal River Cruises. There may be other scenarios, and I certainly welcome our readers’ opinions.

The first scenario is that for whatever reason, Crystal River Cruises ceases operations. It cancels all sailings and lays up its ships. I give this a 1 percent chance of happening. I would give it a 0 percent chance of happening, but I am hedging in case the unthinkable happens. Why am I so confident that Crystal River Cruises will not cease operations? The company has reported “record-breaking levels of bookings for 2022 for all five ships,” and with bookings comes cash flow. Granted, some of those bookings – in fact, possibly many of them – are from those who rescheduled their canceled pandemic cruises. But there is new money flowing in. I know, because I paid my deposit for my October cruise, and I’m sure I am not alone in injecting cash into Crystal’s coffers.

The second possible outcome is that Crystal rebuilds its working capital. In this scenario, the August river sailings resume as planned. The company’s ocean, yacht and expedition cruises also resume as planned (some of those are starting in July). With its ships sailing, Crystal slowly begins to recover from the pandemic. This is the scenario that I am betting on.

Moreover, Crystal’s parent company appears to be showing some signs of recovery. Last week, the Genting Group opened Resorts World Las Vegas, the most expensive resort ever developed in the so-called “Monte Carlo of the East.” The Las Vegas Review-Journal reports that at least 20,000 people were at the 11 p.m. opening of $4.3 billion hotel-casino last Thursday. It’s plausible to assume that revenues generated from the successful resort and casino operations could keep Crystal afloat – at least until a buyer comes along, which brings us to scenario number three.

3. A Buyer Steps In To Keep Crystal River Cruises Afloat

The third possibility is that someone steps up to buy Crystal’s five river ships. Of course, a buyer may only want one ship or two, so this is also a possibility. Would a buyer keep the Crystal brand? It’s hard to imagine not capitalizing on Crystal’s exceptional pre-pandemic reputation. Although Crystal’s river fleet has only been in operation since 2016, during that time the company managed to develop a river cruise experience that rivals Crystal’s reputation on the oceans. It’s hard to dismiss the fact that readers of Conde Nast Traveler and Travel & Leisure voted Crystal world’s best for more than 24 years running, even if you’re someone like me – that is someone who finds awards to be dubious. Bottom line: My guess is that Crystal would continue as a brand should there be new owners.

The sale of Crystal’s river fleet can be compared to Royal Caribbean’s selling of Azamara Club Cruises to Sycamore Partners. Divesting of assets, in fact, seems to be part of a larger trend of travel companies selling off products that are not part of their core businesses.

It’s somewhat similar with Genting. Ocean cruises, hotels and casinos have long been the core products of the company. Just this week Genting Hong Kong announced plans to build a series of Endeavor-class and Universal-class ships customized for luxury hotel brands. Those are to be managed by Crystal Cruises, if they come to fruition.

“Genting is a complex company, but river cruises really don’t fit into their future,” Mike says. “Crystal Cruises does fit into their future, but it will be different from the Crystal of the past. In the broader sense, industry observers expect there’s going to be a lot of changes coming in the structure of cruise companies – both ocean and river.”

Welcome To The Waterside Restaurant

Crystal is not alone in its struggle to survive and thrive. As consumers, it’s important that we remain aware of that. Perhaps the most important thing when booking any cruise is to protect your investment against the unforeseen. Do your homework. And be prepared to pivot, as plans change and ships get reshuffled. Purchase the appropriate travel insurance – and more important than ever in these times, hope for the best, but as the saying goes, prepare for the worst.