You are here: Home / All Inclusive River Cruises / Calculating The Real Cost Of Your River Cruise 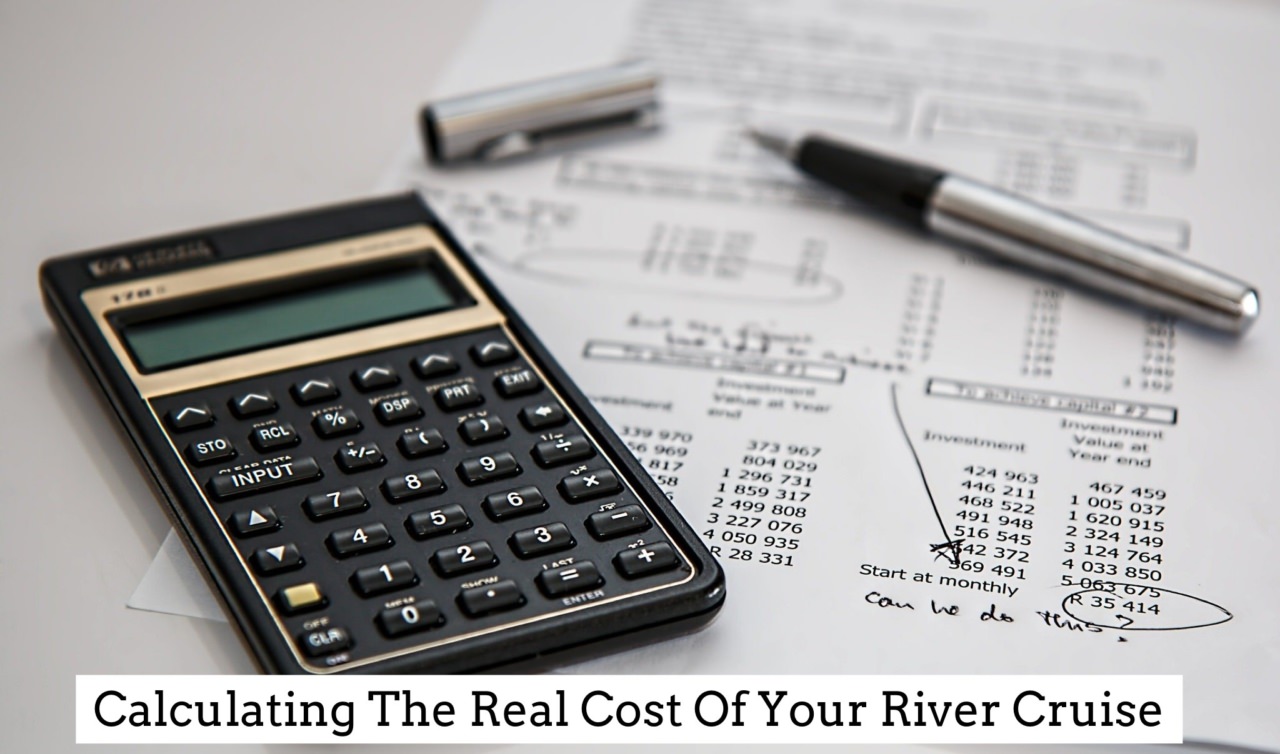 Normally, when you purchase an item, pricing is pretty straightforward. That’s not always the case with river cruising. For example, you may see a river cruise for $2,999 per person. Sounds great. But port charges aren’t included. That adds another $300 per person. You may need to budget for gratuities, another $100 per person. What follows are some factors that you will want to consider when calculating the cost of your river cruise.

Unlike checking out of a hotel, you won’t linger until noon (or later) on disembarkation day. Some guests will depart before 6 a.m. for transfers to the airport and their flights home. Others may be able to stay as late as 9 a.m. Either way, you’re not getting a full day on your river cruise on that last day. Our “true per diems” are designed to help you compare the cost of your river cruise across the board. How do cruise companies advertise their itineraries?

Gratuities (on ship): Some companies include gratuities for crew, others leave it to their guests to take care of gratuities. If your cruise is one of the latter, you may want to have some euro notes handy for stuffing into envelopes (or into the hands of your favorite crew members) on the last night of the cruise. Guidelines of how much to tip also vary by river cruise line. See Gratuities: Which River Cruise Companies Include Them?

Beverages: Nearly all river cruise companies offer complimentary soft drinks, specialty coffees, beer and wine during lunch and dinner. In between mealtimes, though, you’ll pay for most beverages when traveling with AmaWaterways, Avalon, Emerald, Riviera and Viking. Beverages are included on CroisiEurope, Crystal, Scenic, Tauck and Uniworld. AmaWaterways has a “Sip and Sail” Happy Hour, which includes complimentary cocktails before dinner. Riviera does not include wine and beer, even during lunch and dinner. For those who don’t imbibe – and who don’t wish to pay for an inclusion they won’t make use of – Riviera’s a la carte pricing structure makes a lot of sense. For those who want to add a touch of the all-inclusive to their Riviera experience, the company offers drink packages for that start at roughly $159 per person for an average weeklong voyage. This adds draft and non-alcoholic beer, red and white house wine, bottled water, soft drinks and juices on a complimentary basis to lunches and dinners served onboard. Spirits, or drinks purchased outside mealtimes, come at an additional cost. Viking River Cruises has a similar package. While Viking includes beer and wine with lunch and dinner, the company also offers a Silver Spirit Beverage Package. At €300 per cabin, double occupancy, the cost of Viking’s all-inclusive beverage package may seem steep at first glance, but it can be quite a value when you consider the quality of the beverages offered. Are you a Scotch drinker? Then you may know of Highland Park Ragnvald, which goes for more than $500 a bottle on the internet sites I researched. Yet on Viking, you can enjoy as many glasses as you like of the single malt Scotch whiskey as part of your Silver Spirit Beverage Package. Without the package, a 4 cl shot of Ragnvald goes for €22. Now you know which one to order when you belly up to the bar on Viking.

Optional Shore Excursions: All river cruise companies include complimentary excursions in most, if not all, ports of call. However, some companies offer optional shore excursions for a fee. Avalon, Crystal, Emerald, Riviera and Viking are among the companies that offer optional shore excursions. On my Rhine cruise on Viking, for example, complimentary excursions were offered at each stop along the way. Viking also offered about a dozen optional tours, ranging in price from €49 per person to €189, the latter being a full-day excursion called Taste the Best of Alsace. Viking Hlin’s program director, Candi Finkelstein, told me that this was the number one rated tour on the Rhine Getaway itinerary, so sometimes paying for something you would not otherwise experience is not a bad thing. On Crystal’s Danube Dreams & Discoveries, more than two dozen shore excursions are offered, and most of those are complimentary. Crystal’s optional shore excursions on that itinerary range from a complimentary Culinary Walking Tour in Bratislava to Michelin-star dining experiences for $249 per person. On Emerald Cruises’ Danube Delights itinerary, you can pay extra for its DiscoverMORE excursions for such exclusive events as Tastes of Vienna and a Viennese Concert.

Incentives: Riviera does not offer booking incentives. The rest of the river cruise companies offer a range of incentives, ranging from early-booking savings to two-for-ones and reduced or free air. The incentives are always changing so be sure to check with your travel seller or the cruise company about current offers.

Value of Incentive: Divide the amount of the incentive by the number of nights to arrive at a per-diem value. Calculating the value of the incentives can be a bit challenging, especially when it comes to air. For example, free air isn’t really free air. While Scenic offers free air, the company caps the fare at $1,000 for its lead-in cabins and $1,800 for Diamond Deck (Scenic also offers Business Class Air for $1,995 per person). Emerald Cruises offers free air for all guests in a Suite, category C and above; guests in an Emerald Stateroom, categories, D, E, or F pay $295 for economy air. Viking offers free air on many sailings, as well as upgrades to Premium Economy from $795 per person or Business Class air from $2,995 per person based on select gateways and dates.

Per Diem/Square Foot: Some people like to calculate the cost of their per diem on a square-foot basis. The idea is to provide a guideline of how much space you’re getting for the rate you pay for your river cruise. Though we caution that you should not plan to spend heaps of time in your room. There’s too much to see and do outside of those four walls.

Balcony Upgrade: Nearly all of the entry-level staterooms feature fixed windows. The exception is Crystal, where even entry-level staterooms on its new vessels feature “Panoramic Balcony-Windows” that raise and lower, and basically function like a balcony. CroisiEurope does not offer balconies on the majority of its vessels, but it too has windows that open, and though not as elaborate as those on Crystal, CroisiEurope’s windows provide fresh air and river views. With other cruise companies, you may want to upgrade to a balcony stateroom. You’ll want to calculate that cost into your per diem.