Tauck has announced design and décor details of its new riverboat, ms Andorinha. Currently undergoing sea trials in the Netherlands, the Andorinha will officially launch March 2020 and sail on three new cruise itineraries along the Douro river. 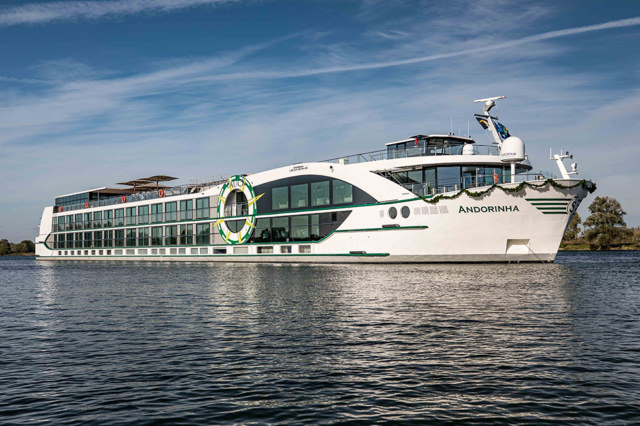 Toward that end of the ship, ms Andorinha’s Sun Deck has been designed and outfitted to serve as a platform for viewing the passing landscapes of the Douro Valley. The Sun Deck will feature canopied Balinese day beds for comfortable, shaded lounging, plus an infinity-style pool that’s five times the size of the plunge pools featured on Tauck’s other riverboats. In addition, the Sun Deck will feature an outdoor grill to host casual barbecues along with a full-service bar to ensure that Tauck guests stay well hydrated.

A Pop-Up Restaurant On The Sundeck 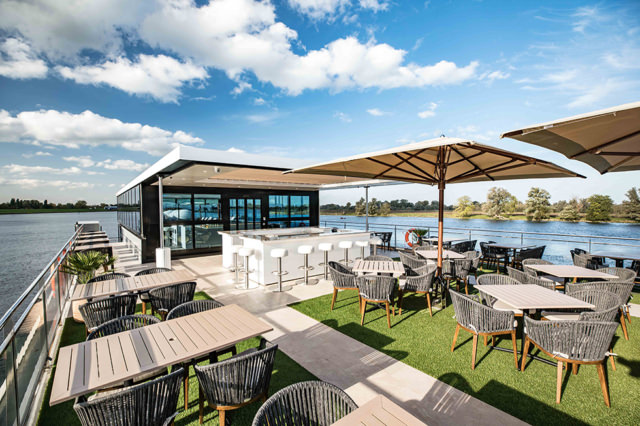 This is not a pop-up bar, it’s a full-service pop-up restaurant. Photo courtesy of Tauck

The most notable feature on the Andorinha’s Sun Deck, however, will be a pop-up restaurant that rises from the stern of the ship on hydraulic lifts to become a fully functioning eatery with commanding views of the surrounding countryside. Named Arthur’s for Tauck chairman Arthur Tauck Jr., the restaurant will offer a mix of steakhouse-style classics as well as a selection of regional fare, and serve as a more casual alternative to the Andorinha’s main Compass Rose restaurant. When approaching any particularly low bridges, Arthur’s will be briefly lowered to improve the Andorinha’s clearance and allow the ship to continue along on its voyage.

Tauck’s other European riverboats all feature Arthur’s restaurant at the stern of the ship’s Diamond Deck; however, the Andorinha is the company’s first ship to position the restaurant on the Sun Deck. Besides having its own menu, Arthur’s will also feature its own dedicated kitchen and staff, and throughout the day it will offer complimentary self-serve fruit, snacks and beverages including cappuccino, latte, coffee and tea.

Inside the ship, a glass-ceilinged atrium will span both the Ruby and Diamond decks, filling the Andorinha’s lobby, reception area, main restaurant and lounge with natural light. Elsewhere, select touches will highlight Portuguese culture and traditions. For example, decorative tiles synonymous with the region will adorn various spaces within the ship; local wines and culinary traditions will be featured at dinners; and luxury Portuguese soaps, shampoo, conditioner and lotion will be featured in all cabins. Even the ship’s name reflects Portuguese culture; the andorinha is a native species of migratory swallow that returns to Portugal every spring. The birds mate for life and return each year to the same nest, and small porcelain figurines of andorinhas have become a local symbol of family, fidelity and home throughout Portugal.

To ensure that guests enjoy cool and comfortable conditions throughout the ship’s interior spaces (despite the Douro Valley’s abundant sunshine and warm temperatures), the 80-meter-long Andorinha will boast an air conditioning system with twice the cooling capacity found on Tauck’s 110-meter ships. In addition, windows on the Andorinha will feature a special UV-reflecting coating that lets in abundant natural light while also blocking out 82% of the sun’s warmth. 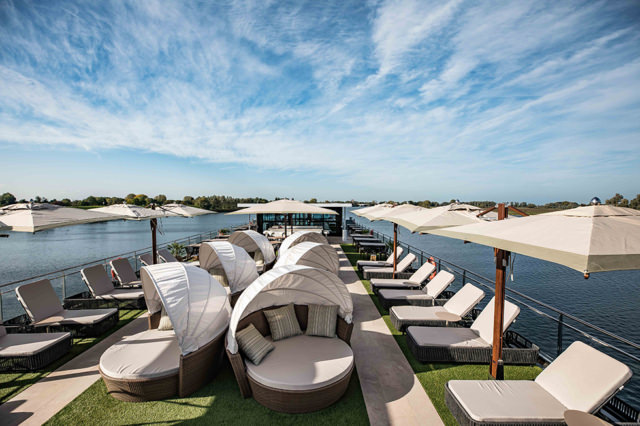 Tauck is offering three Douro River itineraries aboard the Andorinha in 2020; a 12-day journey that bookends a seven-night Douro cruise with two-night hotel stays in Lisbon and Madrid, an eight-day “cruise-only” itinerary along the river, and an eight-day Tauck Bridges cruise designed specifically for families. The Andorinha will be christened on March 31 in Porto, and welcome its initial Tauck guests in the first week of April.