You are here: Home / Cruise Companies / AMAWATERWAYS / AmaMagna / Why AmaMagna Is A Great Choice For First-Time River Cruisers

River cruising and ocean cruising seem miles apart. Well, that’s because they are – or at least oceans apart. A small ocean cruise ship is characterized by a guest capacity of 1,000 passengers or fewer, meaning that river cruise ships can be ten times smaller than these small ocean vessels. Because of the lack of space on the rivers, it means that river cruise companies may have to give up certain amenities to make room for guests onboard – but that’s not always the case.

The amenities that you give up on a river cruise may not be those that matter most to you. In fact, you may not feel like you are giving anything up at all. Sure, there are certain river cruise ships with one dining venue, no fitness area, no spa area, and little onboard entertainment. For some, this is appealing. There is less distraction, guests spend more time off the ship, and variety in meals every night is seen throughout one main dining room rather than in multiple venues. For others, especially frequent ocean cruise passengers, this isn’t enough.

There are many things river cruise companies can do to add more to their ships. They can cut passenger counts, construct fewer cabins, make certain venues smaller, and more; but they are still working with a limited amount of space. That’s because a river cruise ship has to fit inside locks that are used to navigate up and down the rivers of Europe and beyond. A ship can’t be larger than a lock for obvious reasons. If it were, you would be sailing the same stretch of a river over and over again. 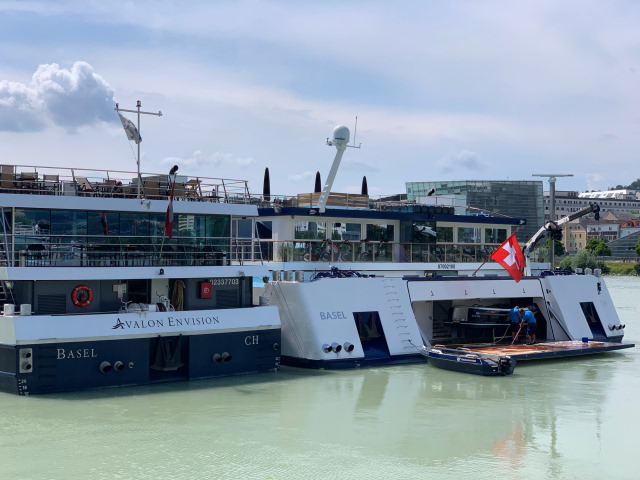 AmaMagna next to a traditional sized river boat. © 2019 Ralph Grizzle

There’s a bit of an exception here, though. You see, the Danube River has locks that accommodate two riverboats next to each other at the same time – or, a larger ship. So, AmaWaterways’ President and Co-Founder Rudi Schreiner solved the problem of too little space with a double-wide river cruise ship on the Danube. Her name is AmaMagna. 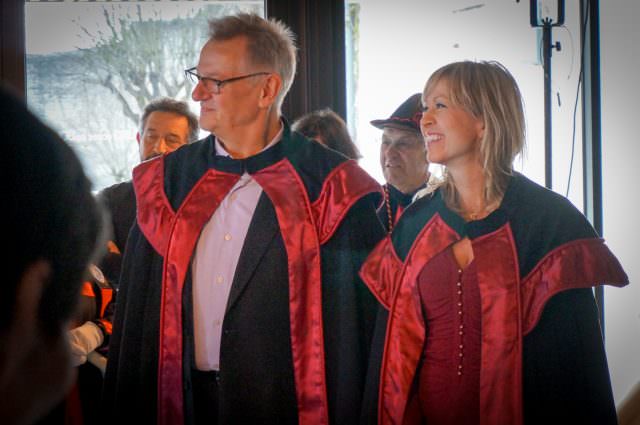 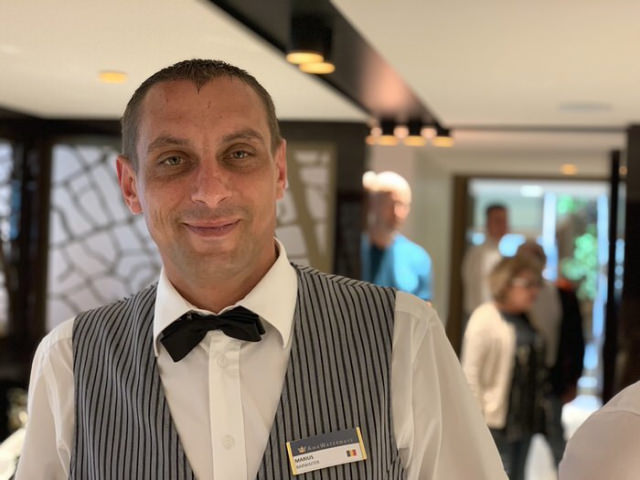 Marius, a member of the bar staff aboard AmaMagna. © 2019 Britton Frost

Something that stands out most on AmaWaterways’ sailings is the crew. The company uses the term family often. Whether it’s the family friendly sailings that AmaWaterways offers with Adventures by Disney or the families who own the cruise company, there is certainly an emphasis on the word. There is a familial feel between members of the crew, who are often seen joking together without losing an ounce of professionalism. But there is also a familial feel between the passengers and the crew.

On my recent sailing aboard AmaMagna, I woke up in a bit of a funk. Marius, one of the bar staff, noticed that I wasn’t my cheery self so he walked up to me with a mimosa stating, “The doctor is here.” There was something professional about his ability to anticipate my needs, but also charming and relaxed about the way that he joked with me. When you leave an AmaWaterways cruise you leave feeling that you and the crew are bonded forever.

On AmaMagna everything that makes AmaWaterways’ stand out is enhanced. The crew are some of the best in AmaWaterways’ fleet. But, there are other ways that the ship stands out. AmaWaterways’ traditional river cruise ships have two dining venues: the Main Dining room and The Chef’s Table. The Main Dining Room features a variety of options, from classic meals to meals that reflect the port that you are visiting. The Chef’s Table is a smaller venue that features a tasting menu and requires a reservation. On AmaMagna, two additional restaurants have been added. Jimmy’s Wine Bar offers family-style dinners; and Al Fresco features outdoor seating and retractable windows so guests can take in the views of the river while they dine.

Let’s get back to Rudi Schreiner for a minute. Schreiner joked that when designing AmaMagna he would often get random ideas and say, “Let’s do that.” That might be one of the reasons that the ship has a movie theatre on board – for no reason other than that Schreiner wanted one. The ship also features an elevator that reaches the sundeck. It seems that Schreiner’s philosophy was everything that can be done should be done – which might also be what resulted in putting a juice bar onboard.

Because AmaMagna is double-wide, it is able to offer things that other river cruise ships can’t. The extra room is noticeable in many areas of the ship, but is absolutely most important when it comes to staterooms. Staterooms don’t feel much smaller than what you would find on an ocean ship. On a sailing this past summer, our 355 square-foot room was large enough to feature a separate room for the toilet. Some cabins can even accommodate four people.

It’s not always easy to transition from ocean cruising to river cruising, but AmaMagna certainly makes it easier for those who want to dip their toes into river cruising. And guests can do so without losing the ocean cruise amenities that they value. Multiple dining venues, a self-service laundry, spa, juice bar, and fitness room are all parts of what make AmaMagna shine. And after you go on your first river cruise, I am almost certain you will be coming back for more.