You are here: Home / Commentary / River Cruise 101: How River Cruising Evolved & Where Its Going

As the James Baldwin quote goes, “If you know whence you came, there are absolutely no limitations to where you can go.” While I certainly think you can take a river cruise without having a sense of its historical underpinnings, there’s no doubt that a little insight into the inception of this form of travel makes it all the more enriching. So before we get into the various modes and approaches to river cruising, let’s glimpse its figurative wake. 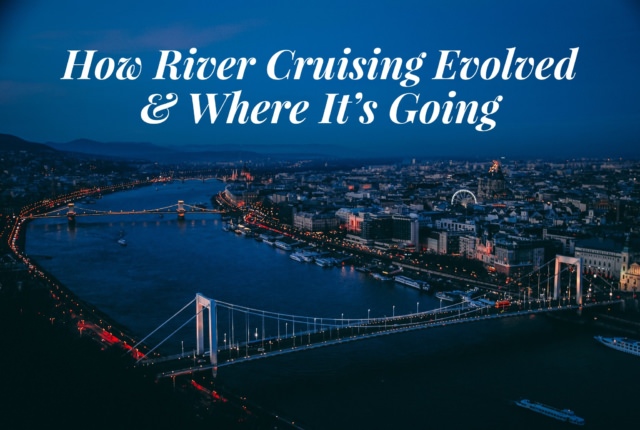 River cruising as we know it today was an entirely new concept to Europe when it was more widely introduced in the late-1960s. Historically, vessels known as barges were merely used to transport goods along the waterways of Europe. They could carry bulk and other cargo that was difficult to ship by traditional land-based methods, and even after the adoption of the railroad as a method of moving goods and passengers, barging remained an economical and popular way to conduct business. Railroads were limited by their fledgling infrastructure, and fluctuations in the gauge, or track size, used between competing companies often meant that trains could travel no farther than a country’s geographical boundaries.

As rail transport improved and became standardized, more and more goods began to be shipped via train instead of by barge. The introduction of delivery trucks and other automobiles in the early 1900s meant that goods could be driven locally between two points, causing a further reduction in the amount of goods shipped by barge along Europe’s waterways. After World War II, the decline in goods shipped over the waterways of Europe caused some enterprising ship owners to come up with a radical idea: They would convert their barges from cargo ships to passenger ships in order to ferry people on long pleasure cruises up and down the rivers.

One of the earliest innovators of barging as a vacation choice was a young man named Richard Parsons. A newspaper reporter for Reuters, Parsons had purchased an old coal barge that he and his brother John repositioned to Dunkirk and refitted into a passenger ship in 1966. Dubbed the Palinurus, this 20-guest vessel was equipped with just two toilets, two showers and one bath. Parsons didn’t really think much of the invention at the time, stating in a 2008 interview with France Today: “We never thought about luxury then—it was just the idea of a fun holiday, walking and biking and eating and drinking. The most exciting thing for me was that no one else was doing it.”

Even though Parsons was at the forefront of barging innovation, there were still drawbacks in those early days. The waterways still catered primarily to cargo traffic, so it wasn’t uncommon to be stuck at the back of an extremely long queue of freighters waiting for their turns in one of the many locks along Europe’s waterways. Other areas had almost no traffic at all and as a result overgrowth from surrounding trees nearly blocked access to locks and waterways. The experience, on the whole, was an uneven one, only suitable for the adventure traveler who didn’t mind a few bumps along the road, or in this case, the river.

Everything began to change in the late 1960s when American writer Emily Kimbrough chartered a barge for herself and some friends. Although nearly 70 years old at the time, Kimbrough published a book in 1968 about her barging adventures that piqued the interest of the American public. Floating Island, as it was called, brought American travelers to France to experience barging for themselves, and it was this influx of North Americans that was largely responsible for the race to outfit ships with better and more luxurious accommodations. What began as a fun diversion by a few dedicated entrepreneurs had suddenly blossomed into an industry that was in high demand.

In attempts to lure even more travelers from North America, barges began to be acquired and refitted at a rapid rate. As competition on the waterways grew for this new lucrative passenger traffic, owners and operators began to think more creatively in terms of both interior fittings and itineraries. Gone were the days of shared bathroom and washroom facilities, replaced instead with staterooms that more closely resembled the finest luxury passenger liners of the day. Exquisite woodworking and lounges that recalled the interiors of the Grand Salons of Paris or the extravagance of the Orient Express instilled these barges with distinctive charm that replaced a once utilitarian persona.

In an age where the internet and other forms of “instant” communication simply did not exist, barging owed its success largely to word-of-mouth. Small groups of friends would often charter a barge for a trip through France, returning to tell friends, family and co-workers about their experiences. Some of these acquaintances would become more intrigued and eventually book passage for themselves.

As airline travel increasingly became more affordable to the masses, the time and expense required to cross the Atlantic by ship, then embark on a multi-week barging experience was mitigated. By the mid 1990s, river cruising as we know it today was slowly beginning to establish itself, though its eventual popularity was far from instantaneous.

By the summer of 1993, there were a number of new, purpose-built river cruise ships plying the waterways of Europe. However, the popularity river cruising enjoys today would remain elusive for another decade. Many of the river cruise ships built in the early 1990s drew heavily on their predecessors for influence—taking the no-frills barging experience and placing it on a newer ship capable of holding more paying passengers.

While these new ships offered passengers newer hardware and more comfort than the barges of the 1960’s, absolutely no attempts were made to lure guests from ocean cruising to river cruising. The ships themselves were generally low and squat, with characteristically narrow staterooms that in many cases didn’t even allow for Queen-sized beds, let alone balconies. Instead, staterooms consisted largely of Pullman-style beds that could fold into couches during the day, punctuated by a collapsible end table situated underneath the window. Culinary options were limited (and often not as good as you would find ashore), with little thought given to providing variety—and you’d likely be out of luck if you had special dietary needs.

All of this began to change toward the latter half of the 1990s. Taking a cue from the ocean-cruising industry, many river cruise lines began drawing up plans for ambitious newbuilds that would not only increase their passenger capacities but also offer more space, amenities and services than ever before.

One of the men who was chiefly responsible for this uptick in growth was Torstein Hagen. No stranger to the world of cruising, Hagen had helmed Royal Viking Line during the 1980s—one of the most fondly-remembered cruise lines to ever ply the oceans. Hagen dreamed of bringing the kind of service and amenities that had earned Royal Viking a place in cruisers’ hearts to the waterways of Europe. He founded Viking River Cruises in the summer of 1997.

Ever mindful of the competition, Hagen decided Viking River Cruises would initially operate in Russia, using four Russian ships that Viking had purchased outright—a rarity at the time. It was to be a decision that would change the face of river cruising forever.

Viking River Cruises wasn’t quite an overnight success, but it certainly came close. Fans of ocean cruising, attracted by Hagen’s history at Royal Viking, gave Viking River Cruises a chance. Much of the river cruise industry, even at the dawn of the internet age, was still extremely reliant on word-of-mouth, and Viking’s recognition gave Hagen the leverage he needed to announce a series of newbuilds that would enter service in 2001.

In just a few short years, the river cruising industry was experiencing a veritable race to see who could churn out the most luxurious, amenity-laden ships possible. That brings us to another influential figure in river cruising, Rudi Schreiner. If there’s one word that can be used to describe Schreiner, “tenacious” would probably suit him best. Along with Kristin Karst and the late Jimmy Murphy, Schreiner co-founded AmaWaterways in 2002. Just 17 years later, the line has grown to encompass a fleet of luxurious ships in Europe, with additional vessels in Asia and Africa and more under construction.

To fully appreciate this number it’s important to remember the kind of climate in which AmaWaterways was founded. In 2002, much of the tourism industry was still reeling from the effects of the terrorist attacks on September 11, 2001, and the river cruise industry as we know it was still very much in its infancy. Nevertheless, the enterprising trio saw a ray of light in establishing a river cruise line dedicated to providing an exceptional experience both onboard and off, and set to work creating Amadeus Waterways—the forerunner to AmaWaterways.

Schreiner was no stranger to the river cruise industry; He’d been employed as Vice President of Product Development with Uniworld when the company first launched its river cruise product in 1993. Schreiner was one of the first to recognize the potential that the recently completed Main-Danube Canal, a massive engineering works project to link the Main with the Danube, would have for the industry.

When Schreiner introduced a 14-night voyage from Amsterdam and Budapest using the new canal, it sold out instantly, and Uniworld went from carrying just a few hundred passengers per year to more than 18,000. It is what one would consider a good problem to have, with capacity creating an ever-present need for new ships. Schreiner went about leasing ships wherever he could find them, developing additional programs and itineraries for the line until he joined Viking River Cruises in 2000. But with the experience Schreiner had garnered, he itched to break out on his own and after just two years, he left Viking to partner with Karst and Murphy. AmaWaterways was born. After just a year in business, the company had partnered with travel giant Globus, which provided the capital needed to enter into an agreement to construct its first, purpose-built ships. At the same time, competing lines were also in the process of ordering their own ships, creating the spirit of competitive innovation between the companies vying for passengers on the European runs.

Today, the river cruise landscape is vastly different from that which existed when Schreiner, Karst and Murphy first set up shop. More new, purpose-built ships exist on the waterways of Europe than at any time in history, and river cruising is slowly but steadily gaining in popularity, attracting passengers who have done ocean cruising as well as those who have never set foot aboard a ship.

Now that we’ve taken a good look back, we can forge boldly ahead. We are seeing more innovations than ever when it comes to river cruising. This year, we’ve seen AmaWaterways introduce AmaMagna, the second double-wide ship on the Danube – which will soon be the only. A couple of years ago, we saw the introduction of a river cruise product geared specifically toward Millennials, with U River Cruises. And though the company has dropped its age restrictions for these sailings, we still see a cruise product that is taking a different approach, with tattoo and drag themed sailings.

With the river cruise industry growing so rapidly, the competition between cruise companies is an advantage for the consumer. Since each cruise company tries to differentiate itself from others, guests are able to be more selective than ever before about what they want their sailing to include – allowing for them to customize their experience on the river. From wine cruises to active cruises to canal cruises and beyond, we will only continue to see growth in this industry. And I, for one, can’t wait to see what the future holds.