AmaWaterways celebrated the christening of its new 156-passenger vessel, AmaMora. Co-Founders Rudi Schreiner and Kristin Karst joined Mayor Adalbert Dornbusch of Lahnstein, Germany and Godmother Libbie Rice, president of Ensemble Travel Group, for a day of festivities officially commemorating the company’s third new ship launched during the 2019 season. AmaMora will sail the enchanting Rhine river, while recent launches of AmaMagna and AmaDouro expand the company’s presence on the Danube and in Portugal, respectively. 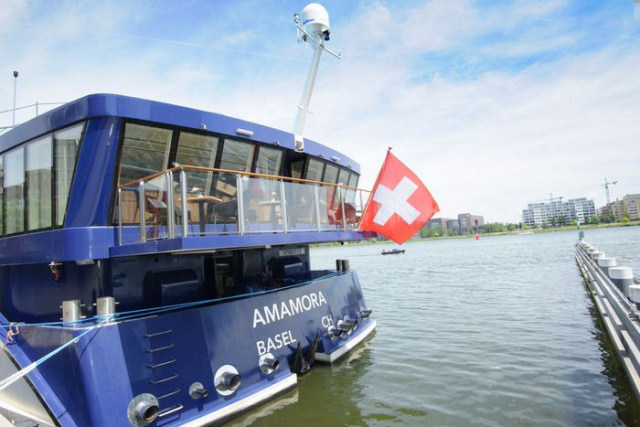 The garland trimmed ship arrived in Lahnstein where guests, media and travel partners were joined by local dignitaries and residents for a special “Rhine Romanticism” themed dockside ceremony. Each guest was presented with a hand-made wine leaf and flower pin to wear as the festivities began. Framed by the spectacular backdrop of Stolzenfels Castle, local entertainers gave guests a taste of Lahnstein’s rich heritage through a performance by a “shanty” choir – a men’s choir that sings traditional maritime songs – and an elegantly costumed dance group performing traditional dances from the early 19th century.

Following the speeches, signing of the guestbook and a blessing of the ship, Godmother Rice officially named AmaMora with the traditional breaking of a champagne bottle on the ship’s hull.

AmaMora’s inaugural season is on the Rhine river sailing seven-night cruises between Amsterdam and Basel. As part of the company’s first-ever Loyalty Appreciation Month, returning guests will be recognized with a special Christmas Markets on the Rhine sailing on board AmaMora, departing November 25, 2019.