Founded by Gérard Schmitter in 1976, CroisiEurope River Cruises is still a family-run business, responsible for the construction, ownership and day-to-day operations of river cruise vessels. The Strasbourg-based cruise line has a lot of ships, more than 50—with 40-plus cruising the rivers of Europe. The all-inclusive cruises impress me with their French flair, inventive itineraries, and innovative ships; including paddlewheelers that can navigate the notoriously shallow Elbe and Loire rivers. The line even offers pseudo river-ocean voyages through the Mediterranean that are wholly unique within the industry. 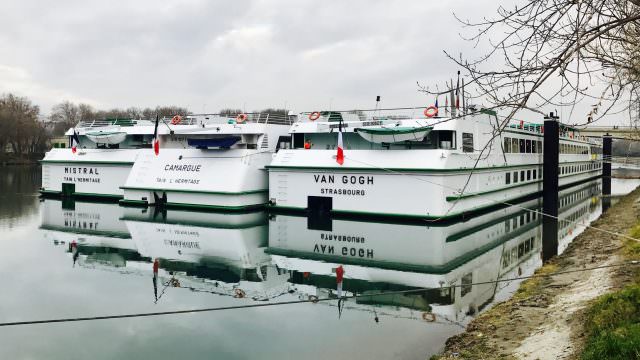 In Avignon, three of CroisiEurope’s more than 50 ships. © 2016 Ralph Grizzle

Although they have been touring the rivers of Europe for more 40 years, it wasn’t until 2013 that CroisiEurope began actively marketing to North American travelers, so guests are still predominantly European. You may be one of the few North Americans aboard, but I didn’t find that to be problematic, as the staff (and often the guests) is multilingual and accommodating.

CroisiEurope is the only river cruise company to feature vessels on every single river in Europe. These include the ones you’ve likely heard of before, such as Rhine, Main, and the famous Danube. But have you sailed down Spain’s Guadiana or Guadalquivir? CroisiEurope does. CroisiEurope is also one of the few cruise lines to offer voyages along Italy’s Po River, sailing from the breathtaking city of Venice. You can also elect to take a more intimate voyage through the gorgeous Canals of France aboard a traditional—but modern—barge, like the cruises I host every year.

CroisiEurope was the first river cruise company to take travelers along the Sava River during a 10-day journey to Hungary, Serbia, Bosnia, and Croatia. In addition to continental Europe, CroisiEurope also features voyages along Southeast Asia’s Mekong River, and cruises that explore the coasts of Croatia and Montenegro during the summer months, along with Cyprus and Israel coastal cruises during the winter.

At the end of 2017, the line welcomed the brand-new 16-passenger, eight-suite African Dream, which offers sailings on the Chobe and Zambezi rivers. Hear more about this ship on our podcast.

CroisiEurope continues to rebuild existing vessels, too. The 24-guest barge Jeanine was reintroduced to the Canals of France in 2013, completely rebuilt from the ground up, followed on the heels by three new barges in 2014 and another for Portugal’s Douro River in 2015.

ms Douce France got a facelift and, in the summer of 2017, began cruising the Rhine on 4- to 7-day journeys in the Moselle, Main, and Rhine valleys as ms Douce France II. The 106-passenger vessel has 55 cabins, including four single-occupancy cabins, two suites, and one cabin designed especially for passengers with reduced mobility. All cabins feature air-conditioning, double beds that can be separated into twin beds, private bathrooms, flat-screen televisions, radios, hair dryers, and safes. All upper deck cabins feature French balconies. The public spaces include a bar and lounge with dance floor, restaurant, sun deck with chaise lounges, and a boutique.

Exceptional French cuisine, excellent service, and creative itineraries are the perfect formula for building a steady stream of satisfied customers. The line’s newest vessels feature stem-to-stern complimentary Wi-Fi internet access and Samsung Galaxy tablets for guests to use. The rest of the fleet offers complimentary wi-fi access in the ship’s Reception and Lounge areas.

Inclusions on CroisiEurope include complimentary beer and wine served with lunch and dinner, and an open bar throughout each voyage. The only items that aren’t inclusive are Champagne, wines on the wine list, and fine brandies. The line also includes all onboard entertainment and port taxes.

One might have to forego on a few luxury extras, like an early-riser’s breakfast and late-night snacks, but otherwise you’ll find it to be a great option for a group, family, or just plain affordable river cruising.

Is CroisiEurope right for you? Click here to find out.

Listen to our podcasts with CroisiEurope’s Devin Quinn below.