Crystal River Cruises offers 7- to 8-day cruises on the Rhine River, as well as a few other 10- to 16-day package options that combine travel on the Rhine with other waterways, including the Moselle, Main and Danube rivers. You’ll find itineraries between Amsterdam and Basel, Amsterdam and Budapest and round trip from Amsterdam.

Let’s take a look at two itineraries that Crystal Cruises offers. The first one is on the Rhine River from Basel to Amsterdam, and the other is on the Rhine and Moselle rivers round trip from Amsterdam. 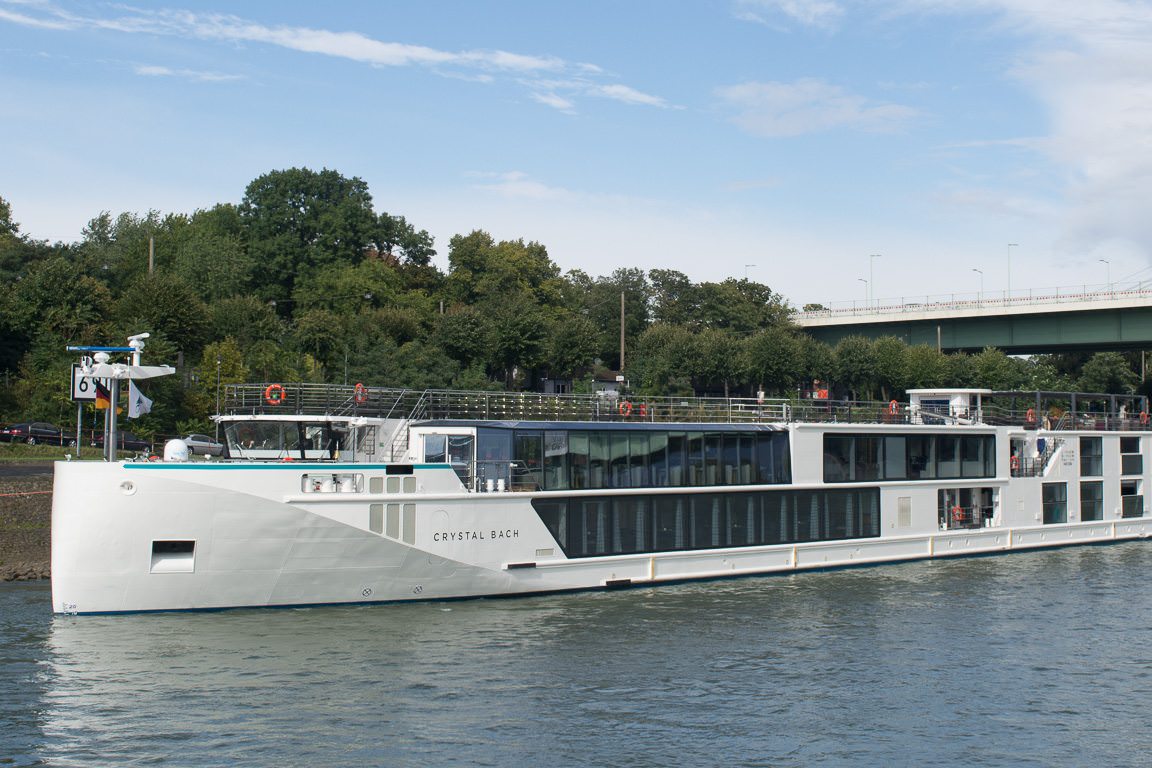 This is an 8-day itinerary between Amsterdam and Basel. We’re going to look at the itinerary that departs from Basel and travels to Amsterdam.

Crystal has two ships that travel along this route – Crystal Debussy and Crystal Bach. Both ships are 442 feet long and carry up to 106 passengers. You might have noticed that the number of passengers is low compared to the industry standard. That’s because these ships feature some very spacious rooms. Stateroom sizes start at 188 square feet, with the largest cabins measuring 759 square feet.

Your cruise will begin in Basel on Day 1. You’ll have the opportunity to take a walking tour of Basel before the ship departs for Strasbourg later in the evening on the first night of your trip.

Day 2 will be spent in Strasbourg. Although, there are three excursions listed, only one is complimentary. The tour that is included in the fare features a private visit to the Strasbourg Cathedral with an exclusive organ recital available to Crystal Cruises’ guests only. 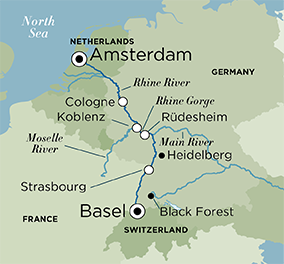 On Day 3, your ship will dock in Karslruhe in the morning. You’ll travel by motorcoach to Heidelberg, which is about 33 miles north of Karlsruhe. A guided walking tour with a visit to Heidelberg Castle is featured. There is also an optional tour of the Big Vat – a large wine vat contained within Heidelberg Castle.

After returning to the ship, you’ll depart for Mannheim. Arrival time is expected to be 2 p.m. There is a guided walking tour offered.

After the excursion in Mannheim, your ship will begin sailing toward Rüdesheim where you’ll dock for the night.

Your day will begin in Rüdesheim on Day 4. There are two complimentary tours available – 1) a visit to Siegfried’s Mechanical Museum; and 2) a tour of Rüdesheim by foot and cable car.

After returning to the ship, you’ll cruise through the Rhine Gorge to Koblenz where your ship will dock for the fourth night of your cruise. There is a special event featured for Crystal guests only. It is the La Finesse String quartet performing at Schloss Kaiseraal, a ballroom of the Electoral Palace.

In the afternoon, your ship will depart for Cologne. On Day 6 you’ll be in Cologne for most of the day. There are two complimentary tours offered as well as two other excursions available for an additional cost. For the complimentary tours, you’ll have the option of 1) taking a walking tour of Cologne, including a visit to the Cologne Cathedral, or 2) a guided walking tour of Bonn, the German city that was home to Beethoven. Bonn is about 18 miles southeast of Cologne.

In the afternoon, you’ll return to your ship and begin your river cruise to Amsterdam.

Arrival time in Amsterdam is estimated to be 9 a.m. on Day 7. You’ll have five complimentary tour options available for this day and two other excursions that are offered but not included in the fare. For the complimentary tours, you can choose to 1) visit Keukenhoff Gardens; 2) take a private canal boat tour with a visit to the Rijksmuseum; 3) visit the city of Haarlem; 4) take a bike tour through Waterland District; or 5) travel to the windmill village of Zaandam and visit the Zaanse Schans Open-Air-Museum.

On Day 8, your trip will conclude in Amsterdam. After breakfast, you’ll disembark and transfer to the airport for your return trip home.

Cruises are available from March through December. Pricing begins at $2,720 to $6,970 per person for the 2019 cruise season.

Only one ship is scheduled to travel this route for the 2019 river cruise season. The Crystal Bach, as described in the section above, is a 442-foot vessel that carries up to 106 passengers. Generous stateroom sizes are between 188 square feet and 759 square feet.

Your cruise will begin in Amsterdam on Day 1. A private canal boat tour is offered the first night and includes a visit to the Rijksmuseum. 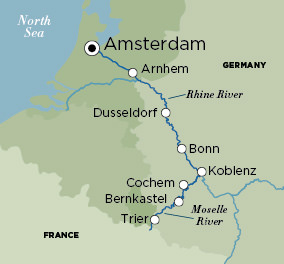 On Day 2, your day will begin in Amsterdam with four excursions to choose from. You can choose to visit Haarlem, which is sometimes referred to as the “Little Amsterdam.” It’s located about 13 miles west of Amsterdam. Or you can take a walking tour of Amsterdam through the city’s Jewish Cultural Quarter. Your other options include a bike tour through the Waterland District or a guided tour of Zaandam.

You’ll visit Düsseldorf on Day 3.  This German city is located on the Rhine River about 140 miles southeast of Amsterdam. There are two excursions available – 1) a culinary walking tour through Düsseldorf; or 2) a bike tour along the Rhine River.

Your ship will depart for Koblenz in the early evening. Koblenz is about 94 miles southeast of Düsseldorf.

Day 4 begins in Koblenz with four excursions  available – 1) a guided walking tour of the city with a visit to the Jewish Quarter; 2) a 90-minute bike tour along the Moselle followed by mountain golf and a glass of wine; 3) a tour of Ehrenbreitstein Fortress by cable car; and 4) a tour of Marksburg Castle. In the afternoon, you’ll begin your river cruise on the Moselle as your ships cruises to Bernkastel.

For the next three days, there are no planned excursions so you’ll be able to choose your own activities. You’ll remain in Bernkastel on Day 5 and Days 6 and, Day 7 will be spent in Trier.

On Day 8, your ship will arrive in Cochem early in the afternoon. This will be the final day of your Moselle River cruise. There are four excursions available – 1) a visit to Reichsburg Castle; 2) active travelers’ trek over the Geierlay Bridge (the longest suspension bridge in Germany); 3) a bike ride to Beilstein, known as the “Sleeping Beauty of the Mosel”; or 4) attend an owner-hosted wine tasting at the Schlagkamp Winery. Your ship will depart late evening.

Bonn, Germany is about 52 miles northwest of Koblenz. Day 9 will be your last day visiting destinations on the Rhine River before returning to the Netherlands where there are several different inter-connected waterways that are either directly or indirectly connected to the Rhine River.

While you’re visiting Bonn, you’ll be able take a guided walking tour through the German city where Ludwig van Beethoven was born and raised. Or you can choose instead to visit the 19th-century Drachenburg Castle. If you choose the latter, you’ll be transported by motorcoach followed by a cog railway ride to the castle. Your ship will depart Bonn early evening.

On Day 10, your day will begin in Arnhem, which is located about 65 miles southeast of Amsterdam. It sits on the banks of the Nederrijn and Sint-Jansbeek rivers. There are five tour options available, including 1) a bike ride through Veluwezoom National Park; 2) a tour of the /WWII Airborne Musuem; 3) a wine-tasting in Groesbeek; 4) a visit to Middachten Castle and Gardens; or 5) a tour of the Kröller-Müller Museum, an art museum. In the evening, you’ll begin your cruise to Amsterdam.

Your trip will conclude on Day 11 in Amsterdam. After breakfast, you’ll disembark and transfer to the airport for your return flight home.

There isn’t much of a difference between these two packages in terms of itinerary length. However, there is a notable difference in when these cruises are available. The Legendary Rhine is offered throughout the river cruise season from March through December, so your chances of being able to book a cruise are greater than they are with the second itinerary. The Enchanting Moselle is only available for two months out of the year. Not only might there be less availability, but you’ll also have limited choices regarding the month and time of year you travel.

If you would like to spend time on both the Moselle and Rhine rivers and you want to travel in May or November, then the Enchanting Moselle is a great option.

If you just want to travel on the Rhine River and would like to have more flexibility with the months you can travel, then the Legendary Rhine might be a better choice for you.