CroisiEurope offers 41 different Rhine River cruise itineraries that range in length from 4 to 18 days. Most cruises are roundtrip from Strasbourg and do not include destinations south of Strasbourg, such as Breisach and Basel.  The company has only two packages with travel between Amsterdam and Basel. Several of its itineraries feature other waterways in addition to the Rhine River. You’ll find itineraries with travel on the Main, Moselle, Danube as well as some less common rivers like the Neckar and Saar. 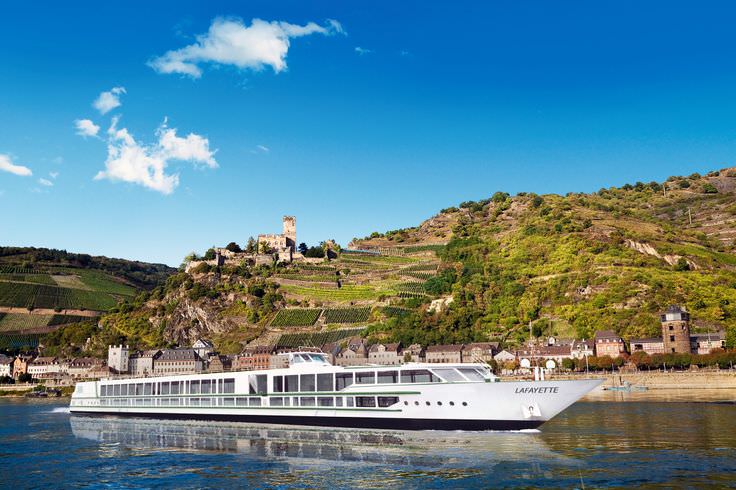 Holland and the Romantic Rhine Valley

This is a 7-day cruise from Amsterdam to Strasbourg. Some of the destinations visited are commonly featured by other river cruise companies; however, there are a couple that are unique to CroisiEurope. Also, there is an excursion featured on the first night of your trip.

CroisiEurope has 11 ships for this itinerary. You can read more about the company’s ships here. They vary in size; although, in general, CroisEurope’s ships tend to have smaller staterooms and tend to carry fewer passengers.

Your trip will begin in Amsterdam. On the first day, you’ll board the ship at 6 pm. There will be a welcome cocktail served. Later in the evening, you’ll enjoy a canal boat tour with fellow passengers. 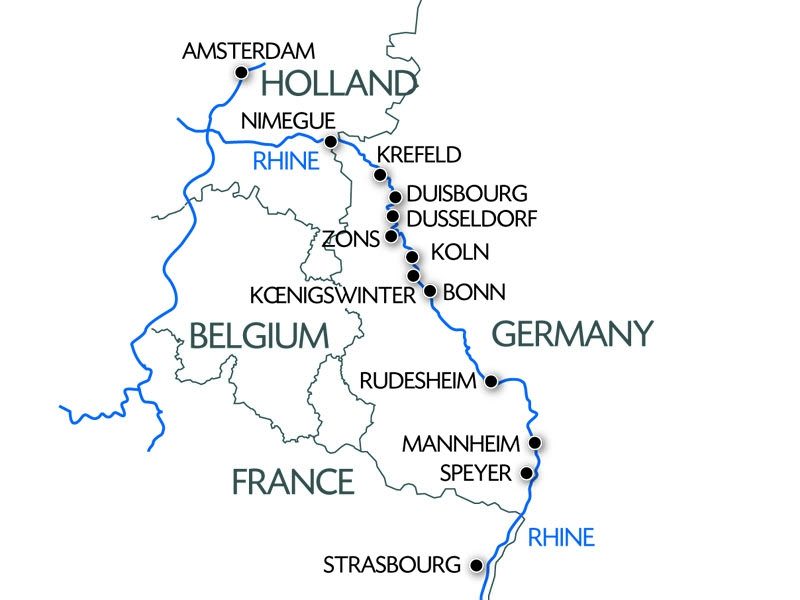 CroisiEurope’s “Holland and the Romantic Rhine” itinerary includes a number of off-the-beaten-path ports of call. Illustration courtesy of CroisiEurope

Day two will begin in Amsterdam. You’ll be able to choose between a guided tour or a bike tour of Amsterdam during the morning hours.

Later in the day, another excursion is offered. During tulip season, you’ll visit Keukenhof Gardens – one of the world’s largest flower gardens. During non-tulip season when the park is closed, you’ll take an excursion to Volendam, which is about 14 mile northeast of Amsterdam. You’ll visit the famous Zaanse Shans‘ neighborhood. A popular tourist attraction in the Netherlands, it’s home to a collection of historic windmills and old buildings.

In the evening, you’ll have some free time to explore Amsterdam before your ship departs for Nijmegen.

You’ll spend day three in Nijmegen. It’s located about 76 miles southeast of Amsterdam close to the German border. The city is also located on the Waal River, which is a branch of the Rhine. While docked in Nijmegen, you’ll be able to choose from two different excursions. Both are located about 60 miles southeast of Nijmegen. You can choose to visit the Kröller Müller Museum in Krefeld, Germany; or you can opt for a bike ride through De Hoge Veluwe National Park, which is located near Arnhem, Netherlands.

On day four, you’ll enjoy a morning cruise to Cologne. There are no excursions scheduled, so you’ll be free to explore the city on your own.

Day five begins with a cruise to Rüdesheim. The tours for this day include a train ride to a wine cellar where you’ll have the opportunity to sample some local wines. Then you’ll take a tour of the Siegfried’s Mechanical Musical Instrument Museum.

You’ll cruise to Mannheim on day six, and you’ll travel to Heidelberg where you’ll spend the rest of the afternoon. Since it’s the last night on board, CroisiEurope features its Gala Dinner.

Your trip will conclude on day six in Strasbourg. You’ll have a buffet breakfast prior to disembarking. Travel arrangements by CroisiEurope end at this point, so you’ll need to arrange your own airport transfer.

Cruises for this itinerary are available from May through October.

Discover The Splendor of the Rhine, Neckar, Main, Moselle and Saar Valleys

This is a 9-day itinerary roundtrip from Strasbourg; however, you’ll return to Strasbourg by motorcoach rather than by boat.

There is only one ship for this itinerary. The MS Léonard de Vinci carries up to 143 passengers. All staterooms are 129 square feet in size.

Your trip will begin in Strasbourg where you’ll board your ship at 6 pm. You’ll receive a welcome cocktail and dinner will be served on board. Your ship will cruise to Mannheim overnight.

On day two you’ll travel to Heidelberg for a guided tour of the city and then enjoy a cruise to Eberbach, which is located about 20 miles northeast of Heidelberg on the Neckar River.

Day three begins with a cruise to Mainz. This German city is located at the confluence of the Rhine and Main rivers. You’ll take a guided tour of the city and then have free time to explore independently. After returning to the ship, you’ll cruise to Frankfurt. It’s located about 26 miles northeast of Mainz on the Main River.

You’ll begin day four with your choice of two excursions. You can take a guided tour of the city, or you can experience a panoramic tour from the Main Tower. In the afternoon, you’ll depart for Aschaffenburg, which is located about 26 miles southeast of Frankfurt on the Main River. You’ll remain docked there overnight.

On day five, you’ll travel to Rüdesheim where you’ll spend the evening. Excursion for this day feature a train ride to a local wine cellar where you’ll have the opportunity to sample some wine. The next stop is at Seigfried’s Mechanical Musical Instrument Museum for a guided tour. And in the evening, you’ll have free time to explore the Drosselgasse.

Your ship will depart for Cochem in the morning. This stretch of the Rhine River is known as the Rhine Gorge or Upper Middle Rhine Valley. It is a designated UNESCO World Heritage Site. On your way to Cochem, you’ll cruise past the famous Lorelei Rock.

Cochem is located on the Moselle River about 35 miles southwest of Koblenz. The Rhine and Moselle rivers meet in Koblenz. After arriving in Cochem, you’ll take a guided tour of the 11th-century Reichsburg Castle.

You’ll spend the first part of day seven in Bernkastel where you’ll have a chance to visit the city. And then you’ll depart for Trier.

Day eight features a guided tour of Trier followed by a cruise to Saarbrücken, which is located about 62 miles southeast of Trier on the Saar River. You’ll arrive in this German city in the evening. Since this is the last night of your cruise, CroisiEurope hosts its Gala Dinner on board.

Your trip will conclude on day nine, but not immediately following breakfast. You’ll have a buffet breakfast, and then you’ll be able to spend some free time in Saarlouis before returning to the ship for lunch. This will be your final meal on board. You’ll be transported to Strasbourg following lunch. At that point, CroisiEurope’s services end. So you’ll be responsible for arranging your own airport transfer for your return trip home.

Availability is limited for this cruise. It it only available during the months of July and August.

If you’re curious about some of the other waterways in this region and would like to sample a couple that are not found in other itineraries, then the second package is a great choice. You’ll spend some time on the Rhine River. You won’t visit many destinations commonly associated with a Rhine River cruise, but you’ll visit some destinations that are rarely found in these itineraries. And you’ll cruise along five different rivers – the Rhine, Main, Neckar, Moselle and Saar.

However, if you’re not able to travel during the available dates in July or August, then this itinerary would not work for you. Also, due to its limited travel dates, there might not be availability for the current season.