Avalon Waterways has about 50 different Rhine River cruise itineraries ranging in length from 5 to 24 days. Most packages combine a cruise on the Rhine River with other waterways, such as the Moselle, Main, Danube, Rhône and Saône.

Cruises on the Rhine River only are between Amsterdam and Basel and range from 8 days to 10 days. The 10-day itineraries also include a 2-day visit to either Paris or Lucerne, depending on the package. 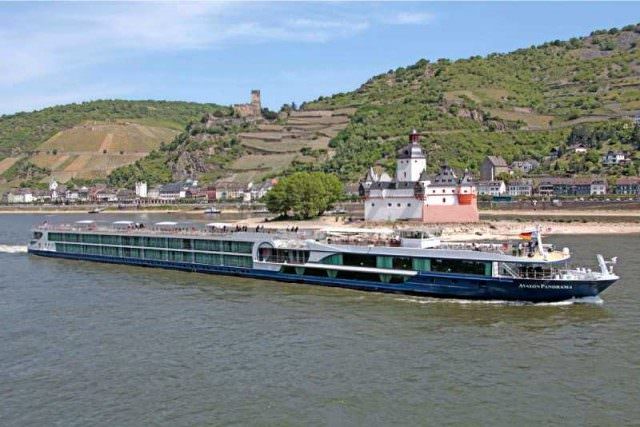 This is an 8-day cruise northbound from Basel to Amsterdam or southbound from Amsterdam to Basel with visits to destinations in France, Germany and Netherlands. We’re going to look at the northbound itinerary, which begins in Basel.

Guests must board the ship by 5 p.m. The first evening includes a welcome reception and dinner on board. Your ship will depart for Breisach where you’ll be docked your first night. This city is located about 37 miles north of Basel.

Avalon Waterways offers three different tour types; although, not all of them are featured for every excursion. The tour option types, include the Classic Tour, Discovery Tour and Active Tour. 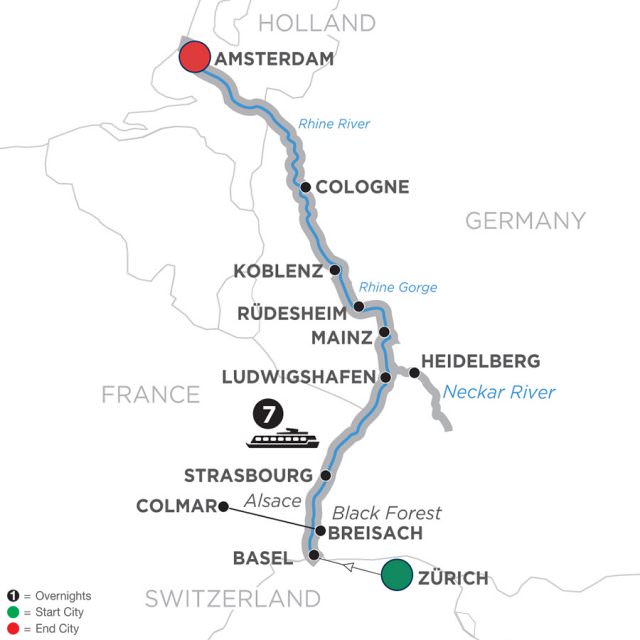 Your day will begin in Breisach, Germany on day two. You’ll have two different options. You can either stay on the German side of the Rhine and enjoy a guided excursion to the Black Forest (Discovery Tour). Or you can take a guided tour of Colmar on the French side of the Rhine (Classic Tour). In the afternoon, you’ll have a chance to explore on your own before returning to the ship. You’ll cruise to Strasbourg in the evening where you’ll be docked for the night (the ship docks in Kell, Germany, adjacent to Strasbourg).

Day three features a guided tour of Strasbourg (Classic Tour) and an optional afternoon excursion to the Alsace wine region. Or you may choose instead to visit the Maginot Line – a series of concrete fortifcations built during WWII to help prevent the Germans from invading. This historical site is located about 36 miles north of Strasbourg.

The Avalon Panorama will depart for Ludwigshafen where you’ll be docked overnight. This German city is located on the west side of the Rhine River north of France. It is also located across from Mannheim, which sits on the eastern bank of the Rhine River.

You’ll have three different tour options on day four while you’re docked in Ludwigshafen. You can travel to Heidelberg for a guided tour of the city (Classic Tour). This German city is located on the Neckar River about 12 miles southeast of Mannheim. Or you choose between the Heidelberg Philosopher’s Hike (Active Tour) or an excursion to Speyer, which is located about 16 miles south of Mannheim.

In the afternoon, you’ll return to the Avalon Panorama and enjoy a cruise to Mainz, which is located about 52 miles north of Ludwigshafen at the confluence of the Main and Rhine rivers. After arriving in Mainz, you’ll take a guided tour of the city, which includes a visit to the Gutenberg Museum.

On day five you’ll cruise through the Rhine Gorge and visit both Rüdesheim and Koblenz. Your first stop will be in Rüdesheim where you’ll have a few different tour options. You can visit Siefried’s Mechanical Museum (Discovery Tour) or take a guided hike through the vineyards (Active Tour). There is also another Discovery Tour featured the included either a coffee or wine tasting based on the date of your cruise.

After visiting Rüdesheim, you’ll return to the ship for a cruise through the Rhine Gorge to Koblenz. This stretch of the Rhine is where the infamous Lorelei Rock is located. There is a Classic Tour available in Koblenz featuring a guided tour of the city. Your ship will remain docked in Koblenz overnight.

On day six, you’ll travel to Koblenz where you’ll have three different tour options to choose from, including a fast-paced walking tour (Active Tour), a slower-paced walking tour (Classic Tour), or visit to some Jewish Heritage sites (Discovery Tour). There will also be an opportunity to sample some Kölsch beer.

Later in the day, your ship will depart for Amsterdam, which is about 165 northwest of Cologne.

Day seven is spent in Amsterdam. You’ll take a canal cruise. During tulip season (between March and May), you’ll visit Keukenhof Gardens. And during the other months, you’ll visit Zaanse Schans – famous for its historic windmills.

Your trip will conclude on day eight. After breakfast, you’ll disembark and transfer to the airport for your return flight home.

This 8-day cruise features travel on the Rhine River between Amsterdam and Wiesbaden. This German city is about 10 miles north of Mainz near the confluence of the Rhine and Main rivers. So there isn’t travel along the Rhine south of Mainz, which means you won’t visit cities like Heidelberg, Briesach, Strasbourg or Basel.

This cruise also takes place on the Avalon Panorama like the itinerary above. 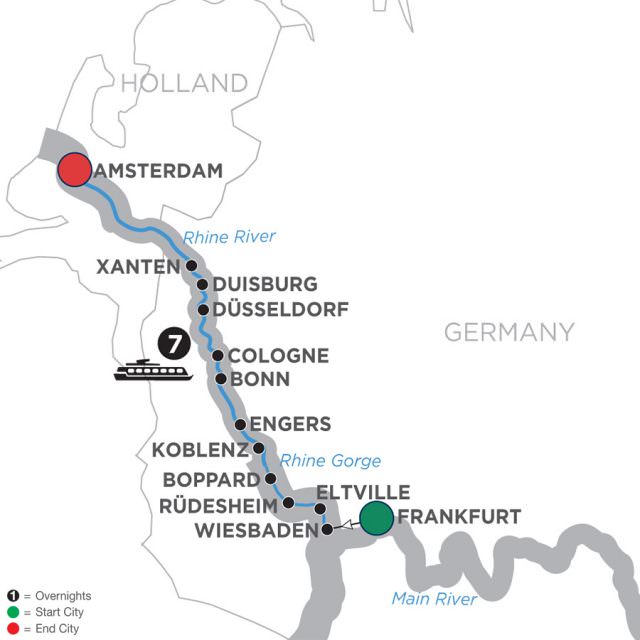 Day one begins in Amsterdam where you’ll embark on your ship. There will be a welcome reception, and dinner is served on board.

You’ll spend day two in Amsterdam. There are three different tour options. You can take a painting class or a culinary walk through Amsterdam. Both are categorized as Discovery Tours. There is also a canal cruise offered (Classic Tour). You’ll have free time to explore the city independently in the afternoon. And you may decide to take a guided bike excursion. 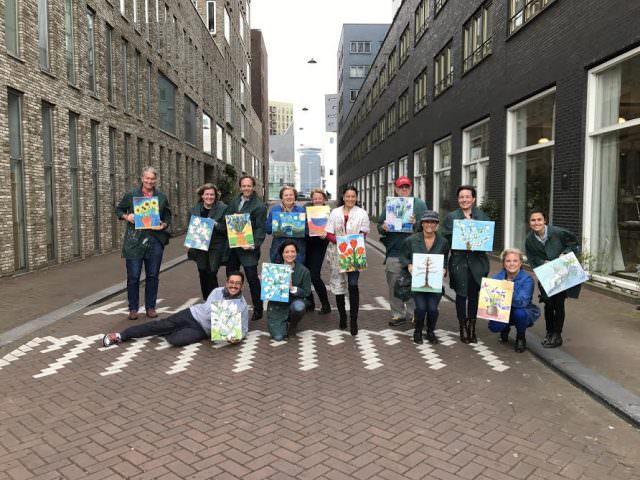 One of Avalon’s Active Discovery options includes a painting class in Amsterdam.

You’ll begin day four in Duisburg. This German city is about 45 miles north of Cologne and 17 miles north of Düsseldorf. While visiting Duisburg, you can take a guided culinary walk through the city (Discovery Tour) or visit the Zollverein Coal Mine (Classic Tour). After your excursion, you’ll return to the ship and begin your cruise to Düsseldorf. A guided tour of the city’s microbreweries is featured.

Day five is spent visiting Cologne and Bonn. During the first part of the day, you’ll be in Cologne. There will be three different options in this city – running tour through Cologne (Active Tour), visit the Belgian Quarter (Discovery Tour) or walking tour of the Old City (Classic Tour).

After your excursion in Cologne, you’ll return to the ship and depart for Bonn. This city is about 18 miles southeast of Cologne. There are no scheduled excursions in Bonn, so you’ll have the opportunity to explore independently.

On day six you’ll spend the first part of your day in Koblenz. There are three different tour options – a visit to Marksburg Castle (Active Tour), the Volcano Tour Experience (Discovery Tour) or a guided walk through Koblenz with a cable car ride to Ehrenbreitstein Castle (Classic Tour).

You’ll return to the ship and begin you cruise through the Rhine Gorge as you travel to Rüdesheim. There are no scheduled excursions, but you’ll be able to explore the city independently.

Your day will begin in Eltville on day seven. This German city is about 14 miles northwest of Mainz. You’ll have your choice of three different excursions – a guided hike through Eltville’s vineyards and forests (Active Tour), a guided walk through the historic Old Town of Eltiville with wine tasting (Discovery Tour) or a visit to the Eberbach Monastery (Classic Tour).

After your excursion, you’ll board the ship and depart for Wiesbaden where you’ll spend the rest of your day. There are not planned tours in Wiesbaden, but you’ll be able to explore the city on your own. This destination has more than a dozen hot springs, and its name translates as “meadow bath.” It’s also one of Europe’s oldest spa destinations.

Your trip will conclude on day eight in Weisbaden. You’ll disembark after breakfast and transfer to the airport for your return flight home.

Cruises are available from May through September; however, there is only one sailing each month.

So which is the best itinerary for you? These itineraries are very different from each other in terms of destinations visited. That really is going to be the deciding factor as well as what dates you want to travel. The Active Discovery on the Rhine has fewer sailings, and it might not fit into your schedule as easily. You’ll be able to choose from mulitple dates for the Romantic Rhine, so that might work better for your schedule.

If the dates really don’t matter that much to you, then it’s going to depend on which cities your want to visit. The Romantic Rhine is similar to many other itineraries offered by other cruise lines with regard to destinations visited. The Active Discovery on the Rhine will give you the opportunity to explore some other cities that are not often featured on Rhine River cruises. So if you’ve already taken a Rhine River cruise, you might want to experience a different itineray. Even if it is your first cruise on the Rhine, you might still rather visit the destinations featured in the Active Discovery package.