Back in late 1991, communism collapsed in Eastern Europe, a forgotten region harboring countries essentially ghosted behind an invisible Iron Curtain. With the dissolution of the former Soviet Union, the region’s once Soviet-subsidized and now Soviet-abandoned economies countered financial devastation with varying degrees of success. Unfortunately, this has been compounded by subsequent ethnic wars, religious strife, political upheaval, and shifting national borders that continue to challenge recovery. Marginalization has taken a toll.

Signs of tattered towns and frayed finances still weigh heavy on progress. However, there is a resilience to the former Soviet republic’s people that are driving dreams forward with fervor of conviction, and a quiet strength of fortitude strengthened through ages of adversity.

Today, a cruise on the lower Danube provides an opportunity to visit and explore many of these recovering economies along with their culture, cuisine, and natural heritage. AmaWaterway’s AmaCerto covers five countries (Hungary, Croatia, Serbia, Bulgaria and Romania) while cruising the Lower Danube River.

My ship for the Southeastern Europe voyage was the 162-passenger AmaCerto. Built in 2012 in the Netherlands, the ship has 4 decks and houses a crew of 49, which gives a passenger/crew ratio of 3.31.  The Concerto-class AmaPrima, AmaReina and AmaSonata are more recent sister ships of the AmaCerto.

Staterooms range from 160-290 square feet, up to 300 square feet in the suites. Most rooms have twin balconies, a French and outside balcony, so it’s easy to enjoy river cruise scenery with complete privacy from your balcony.

Each of the staterooms have a private bathroom with a glass-door shower, hair dryer, and vanity area. Personal room amenities include premium brand toiletries, silk robes and slippers.

There is also a fully-stocked mini-fridge, bottled water replenished daily, DVD player, phone for onboard communications, and a personal safe. For entertainment, each room features a HD flat-panel TV with satellite reception. My personal favorite? Free high-speed Internet and Entertainment on Demand because of the in-depth selection of foreign and U.S. movies. Plus, there is complimentary Wi-Fi throughout the ship. 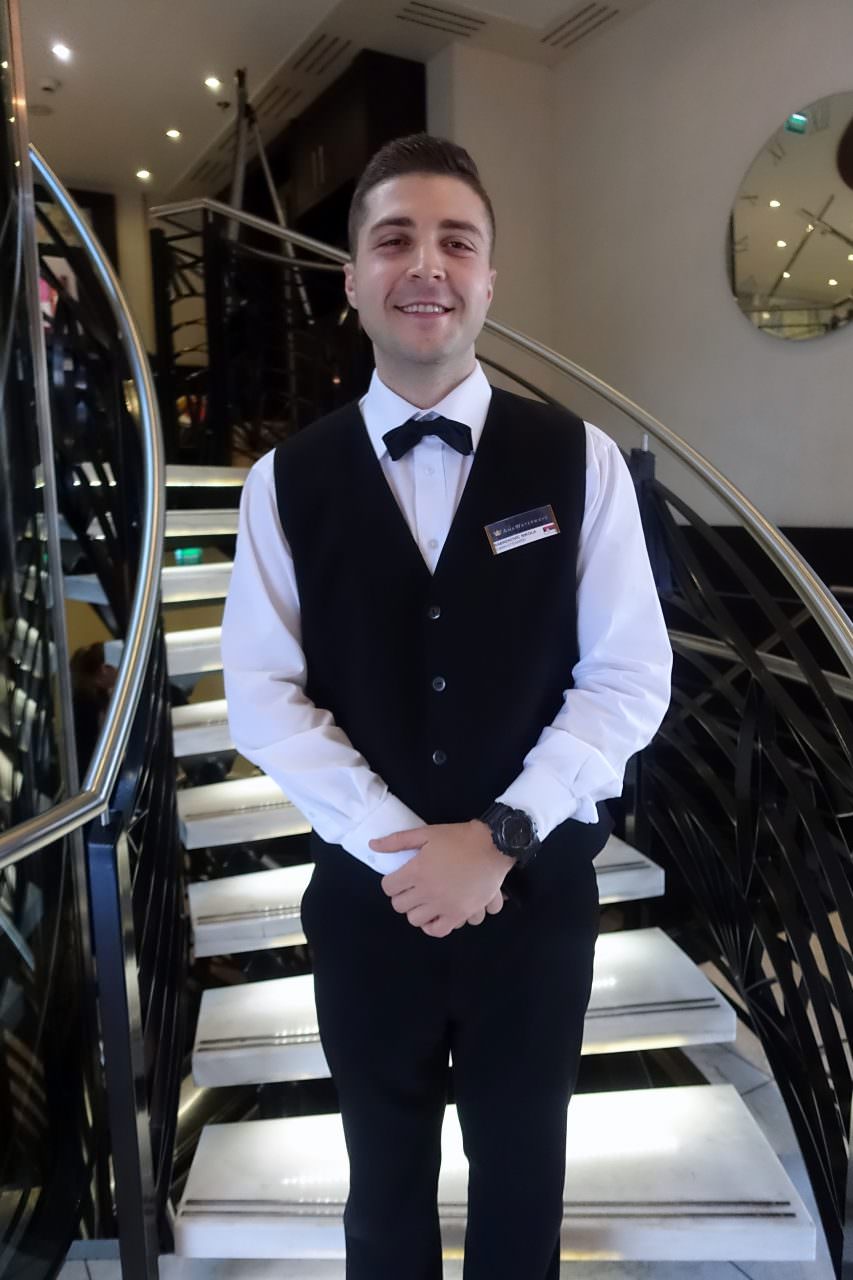 Meals are nothing short of culinary genius. Since AmaWaterways is a member of La Chaîne des Rôtisseurs, the exclusive international culinary society, their dishes are inspired by regional cuisine crafted with locally sourced ingredients, paired with wines and beer. The main dining room features daily specials along with traditional fare. This is where I spent most meals. However, all guests should unequivocally take advantage of a complimentary night at The Chef’s Table. (A reservation is required and can be made while on the ship). The 28-seat specialty restaurant features a tasting menu that’s all about threes: three appetizers, three main courses and three desserts. Hand-selected regional wines are paired with each course.

AmaWaterways includes unlimited house brand alcohol (wine and beer), water and soft drinks with both lunch and dinner. Premium liquor is available for an extra cost. Several themed dinners add to the overall ambiance and authenticity of our regional presence.

Public spaces on the AmaCerto include the Main Lounge, offering panoramic views of the river and countryside along with a bar, piano and dance floor. You will also find a 24-hour specialty coffee and tea station. A glass elevator provides transportation between the floors and a gift shop and fireside library offer alternative pleasures.

For exercise buffs, there is a walking track on the Sun Deck for exercise. You can followup with a session in the fitness room with stationary equipment. For sunbathers a heated swimming pool on the Sun Deck features a “swim up” bar and whirlpool. Chess players can play on the Sun Deck with over-sized chess pieces. Plus, onboard bicycles can be used during guided bike tours onshore. Active hikes are prominently featured at several destinations as well. Afterwards, spruce up with pampering massage services and a hair salon.

Playable chess board on the Sun Deck ©2017 K.D. Leperi

The basic cruise is 8 days/7nights and covers 5 countries (Hungary, Croatia, Serbia, Bulgaria and Romania). I booked a land extension on either side; 2 nights in Budapest, Hungary and 2 nights in Bucharest, Romania to maximize my exposure to two of Eastern Europe’s most-prized darlings.

My pre-cruise tours in Budapest featured a city tour and a full-day Puszta tour to see the Hungarian cowboys and their incredulous horsemanship skills.

One of my favorite onboard entertainment sessions was the talented duo of Branislava Podrumac (voice of an angel) and Milivoje Velijic (piano). Together they presented a musical operetta of “No Boundaries,” a journey of great opera songs from around the world in various languages. The AmaCerto invited them onboard to stage the exclusive performance. I was spellbound for hours after their departure. In fact, I still am.

Cruising the Iron Gates was spectacular, and along the way we had the expert narration of this area’s history, culture, and geography by our hard-working Program Director Florentin.

We first came across the ancient 13th century fort of Golubac. A walled-fortress, it served as a station to assess tolls. Next came the huge though rudimentary face of King Decebalus, carved into the Romanian side of the Danube River. It celebrates the Romanian hero who fought many battles against the Romans.

Golubac on the Danube – a medieval fortress on the Serbian side ©2017 K.D. Leperi

Roman hero Decebalus is carved in stone on the Romanian side of the Danube. ©2017 K.D. Leperi

For my post- tour extension in Romania, I had a city tour of Bucharest that included Old Town and the Palace of the Parliament – second largest administrative building in the world. (The only way to capture a photo of this behemoth building is by taking a panoramic or using a wide-angle lens.) My extension also included a full-day Transylvania excursion to the treasures of Peles Castles and the legendary Dracula’s Castle, where massive crowds added to long waits in line.

My experience in Eastern Europe was probing, provocative, and easily one of my favorites. Though some would consider this off the beaten track, the countries visited have different stories on how they’ve emerged into the 21st century from centuries of conflict, war, and adaptation. Their stories reflect a resiliency in a people who have known extreme hardship but still a people who are looking to the future with a smile.