We’re getting our first look at Crystal Bach, and we like what we’re seeing. Though it stands in a class apart, Crystal Cruises’ first purpose-built river cruiser looks to be as revolutionary as Viking River Cruises’ Viking Longships were when they first debuted in 2012. 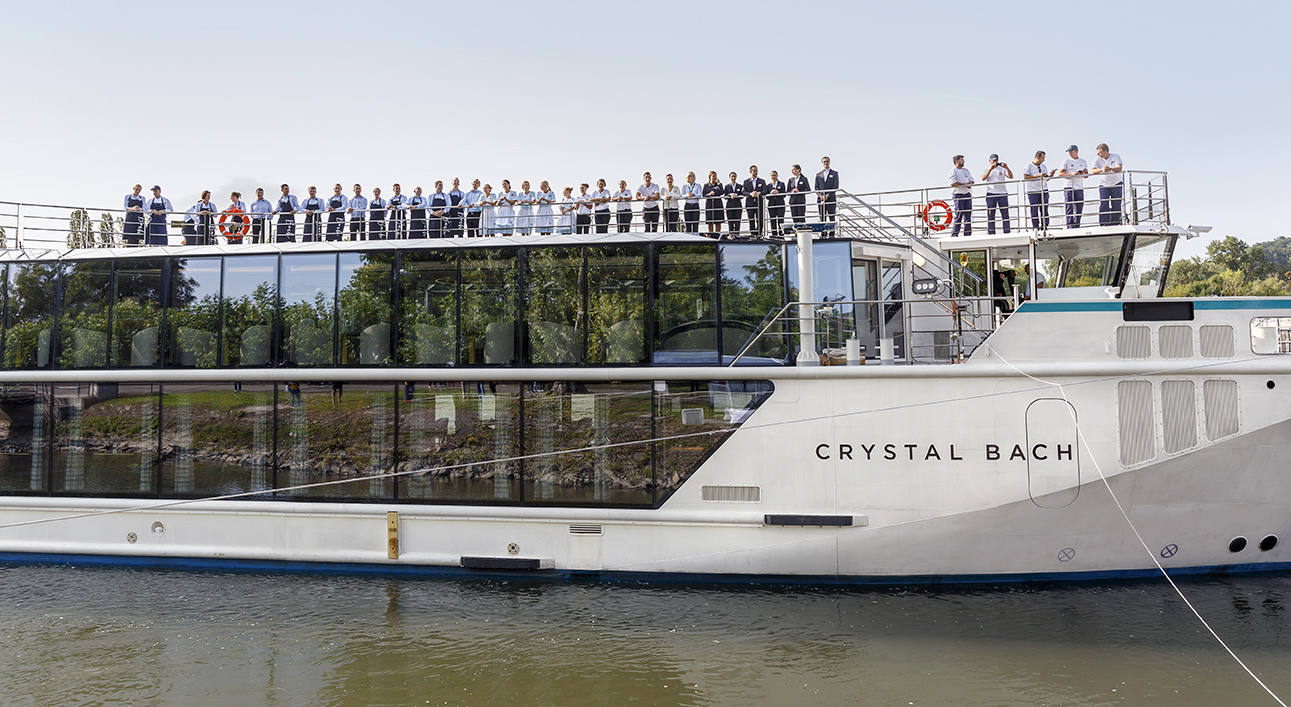 The crew of Crystal Bach at her christening. Photo courtesy of Crystal Cruises.

“As the first ‘Rhine Class’ river yacht, Crystal Bach will introduce a new standard of luxury in river cruising on many fronts, including the culinary concept and innovative experiences found on board,” said Edie Rodriguez, CEO and president of Crystal. “While we are always pursuing new and distinctive experiences on each of our luxury vessels, our overall dedication to unsurpassed quality and abundant choices remains constant.” 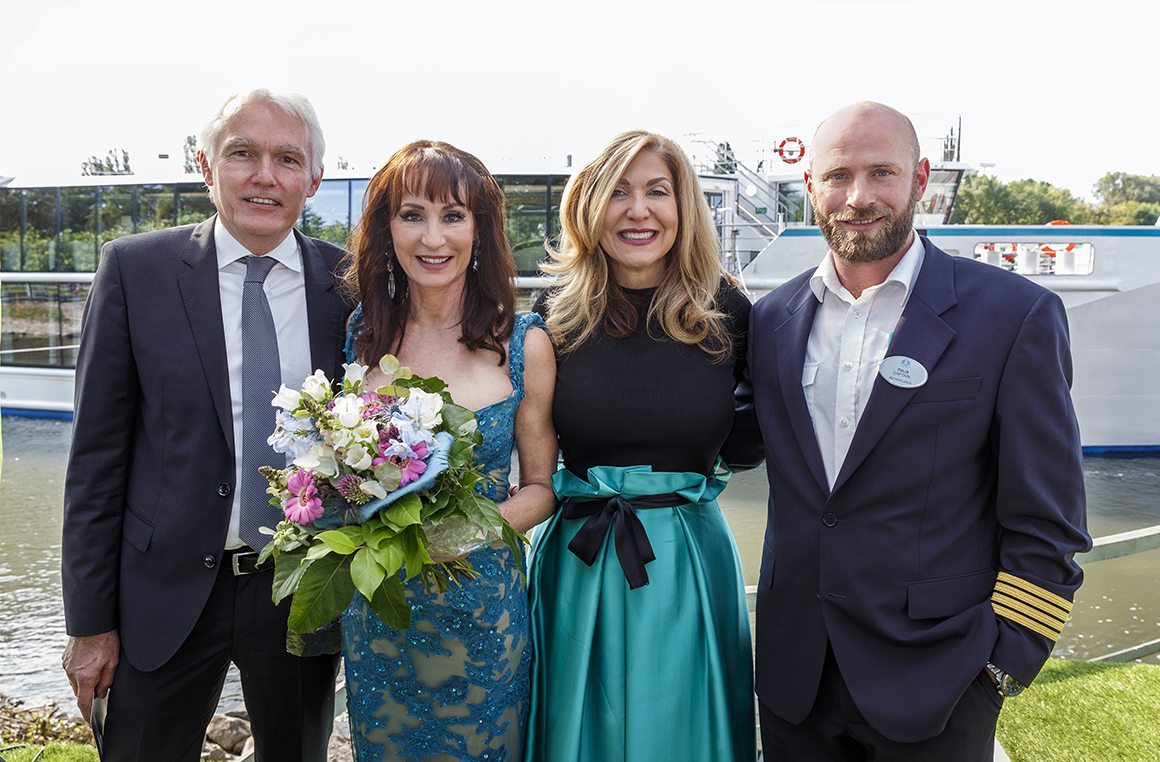 Aside from the vessel’s unique exterior profile, which is characterized by an angular bow and a low-slung wheelhouse inset into it, Crystal Bach’s signature onboard space is the breathtaking Palm Court. 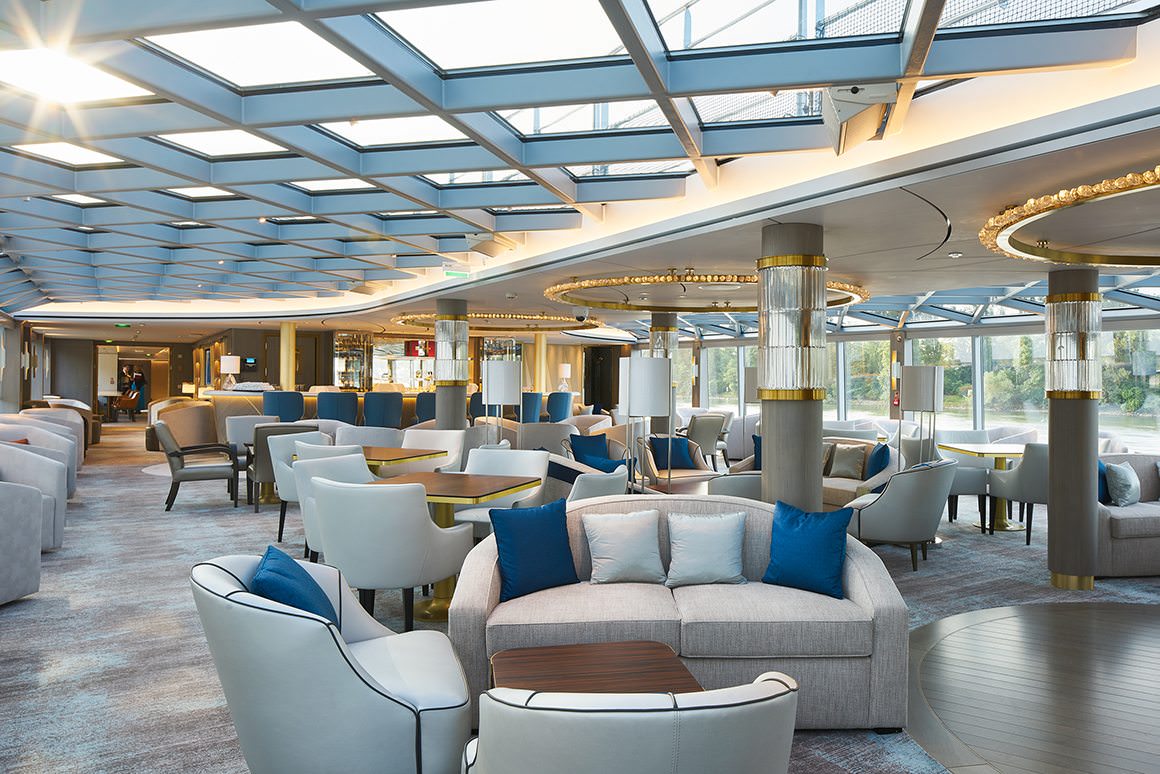 The spacious, airy Palm Court is one of the most innovative spaces aboard Crystal Bach. Photo courtesy of Crystal Cruises.

Featuring panoramic windows that wrap around to form part of the ceiling, Crystal Bach’s Palm Court is a unique innovation on the waterways of Europe. There’s nothing else afloat like this space, which is sure to become one of the line’s signature contributions to the river cruise industry.

If you’ve sailed on one of Crystal’s ocean cruises before, you’ll feel right at home in this elegant space, with soft colors, crisp design, and high-quality appointments. 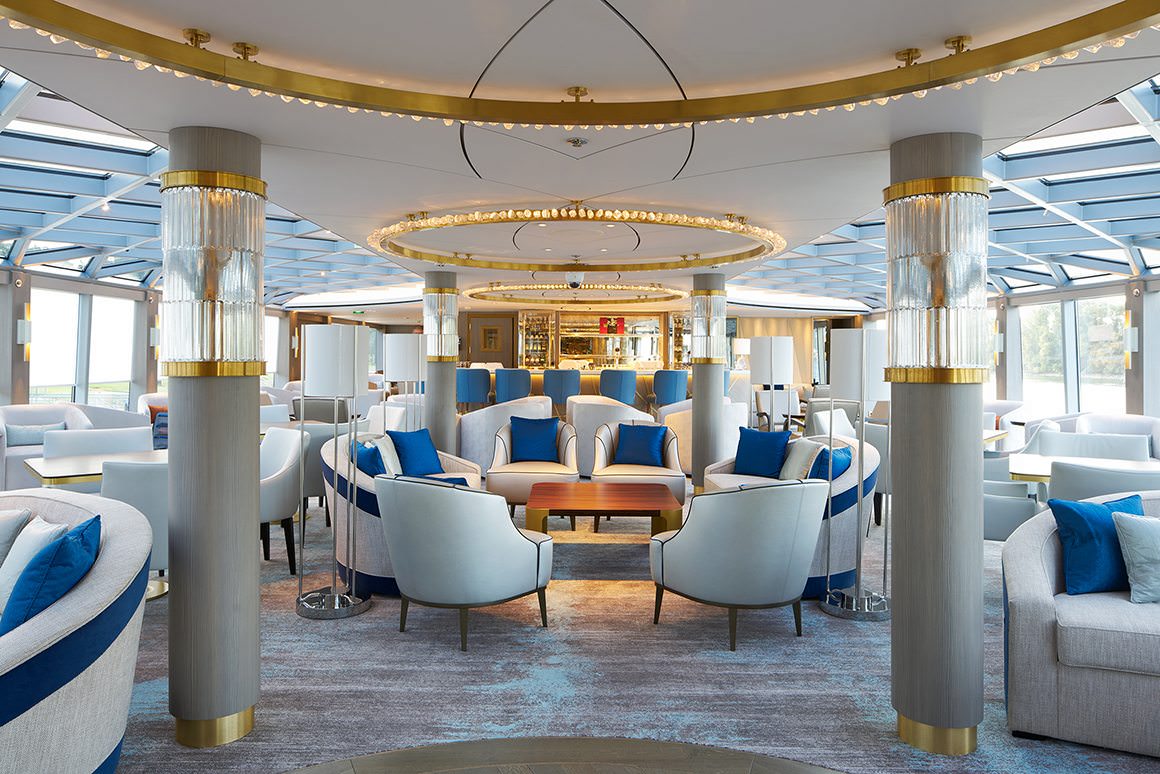 The Palm Court would feel right at home on one of Crystal’s oceangoing luxury ships. Photo courtesy of Crystal Cruises.

Another innovation aboard Crystal Bach is the introduction of a Pop-Up Bar on the ship’s Sun Deck, which Crystal Mozart also features. In the same way that more traditional wheelhouses can be raised and lowered hydraulically to allow ships to pass under low bridges, the retractable bar acts as a social meeting place and full-service watering hole when it is deployed. When the ship needs to transit areas with low bridges, the Pop-Up Bar simply retracts into the decking to create an obstruction-free surface. 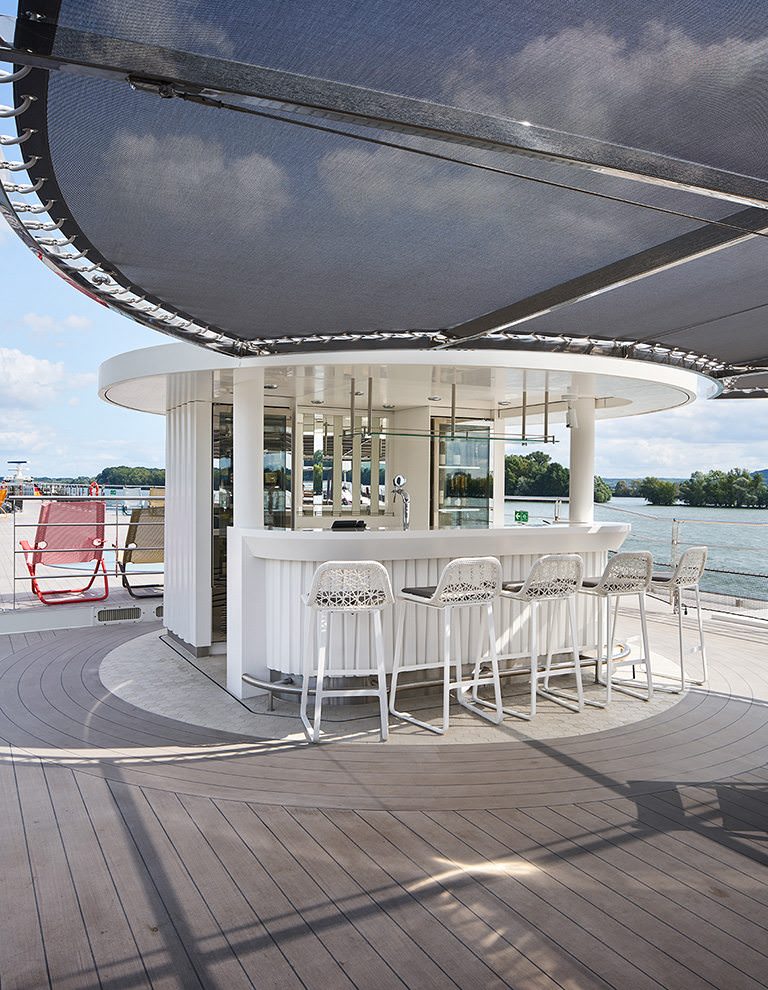 Fancy a sun deck drink? Pop on up to the super-cool Pop Up Bar on the ship’s Sun Deck. Photo courtesy of Crystal Cruises.

Crystal has also taken great strides to make its first purpose-built river cruise ships feel more like its existing fleet. Done in nautically-inspired shades of blue with hints of gold, the Waterside Dining Room would be right at home on one of Crystal’s oceangoing luxury ships. Floor-to-ceiling windows ensure that the rivers of Europe are never out of sight, and Crystal has committed to using locally-inspired and sourced, farm-to-table menus wherever possible. 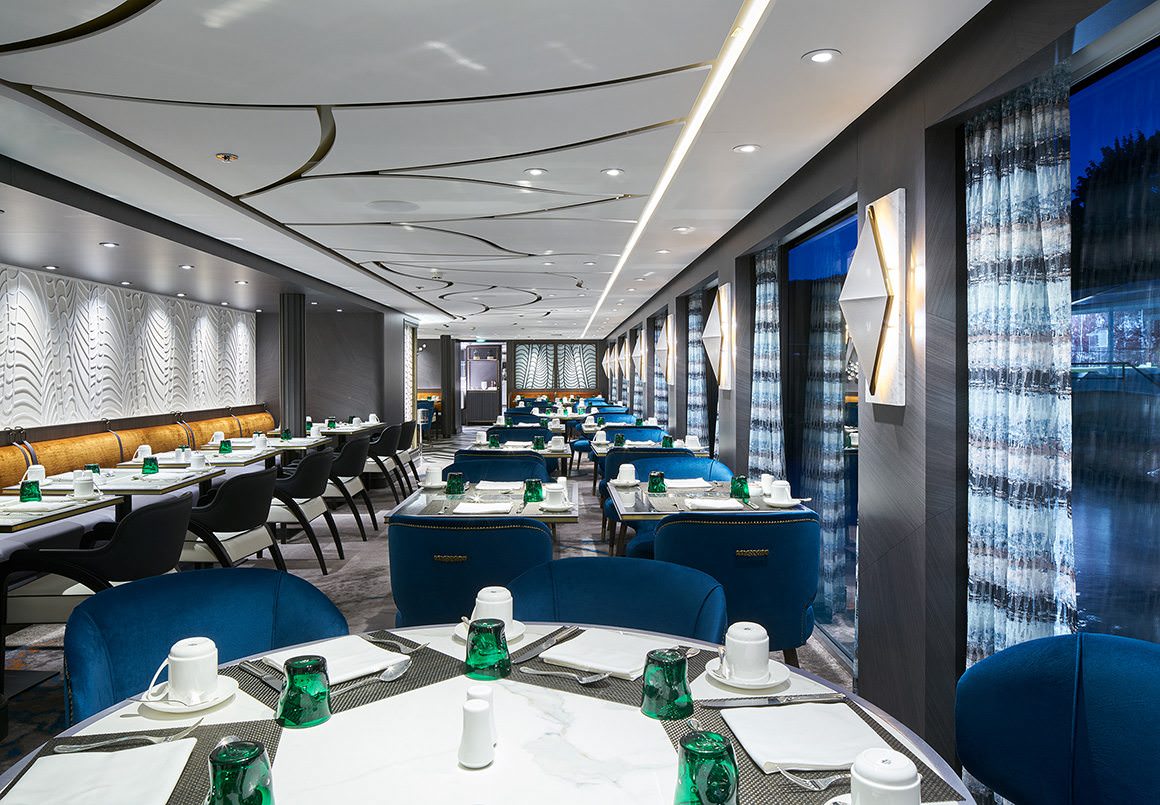 On the accommodations front, Crystal Bach is an all-suite, all balcony ship – a first in the world of European river cruising. Each suite offers butler service, along with plush king-sized beds facing Crystal’s Panoramic Balcony-Windows. Suites are also equipped with walk-in closets, dual-vanity bathrooms in most categories, ETRO robes and slippers, wall-mounted flatscreen high-definition televisions, and in-suite Nespresso machines. 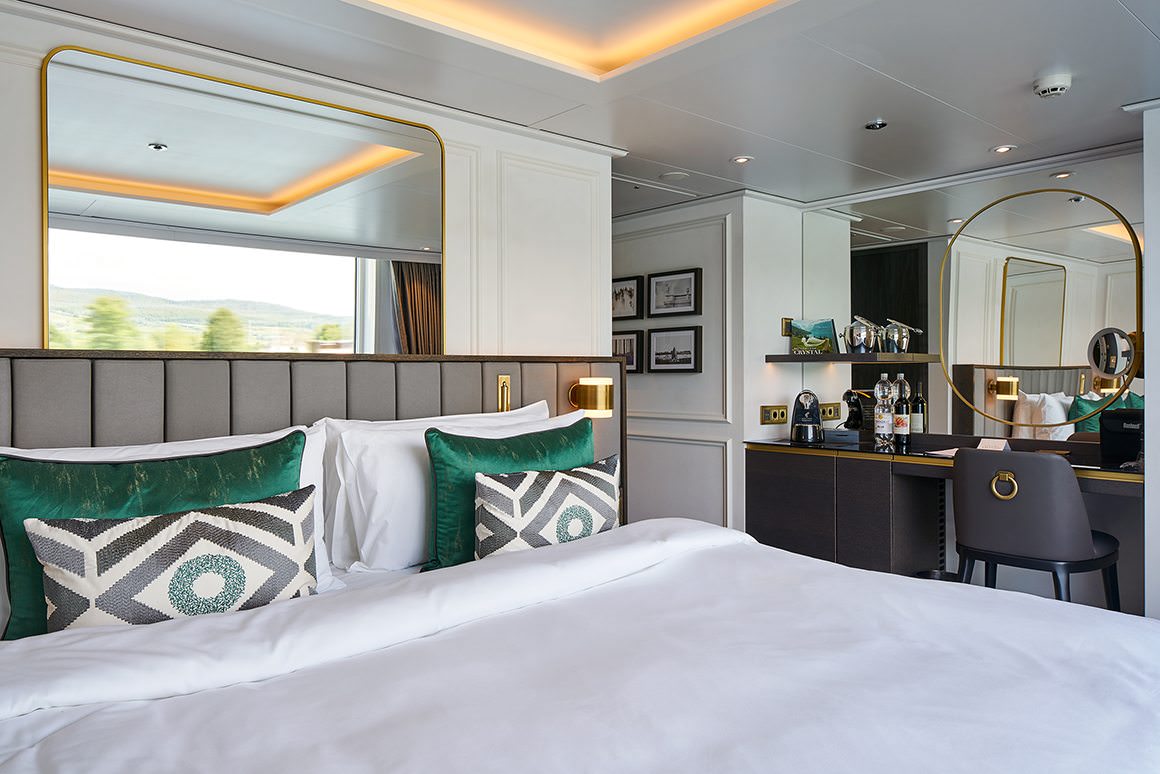 When it comes to spacious accommodations, the all-suite Crystal Bach spares no expense. Photo courtesy of Crystal Cruises.

The Two Bedroom Crystal Suite is one of the largest suites on the rivers of Europe. A living room features its own Panoramic Balcony-Window along with an ambient LED fireplace topped with a flat-panel television and dining space for four, along with a custom sofa and arm chairs. These rooms feature a separate entry vestibule and a guest powder room, both of which are rarities in the river cruise world. 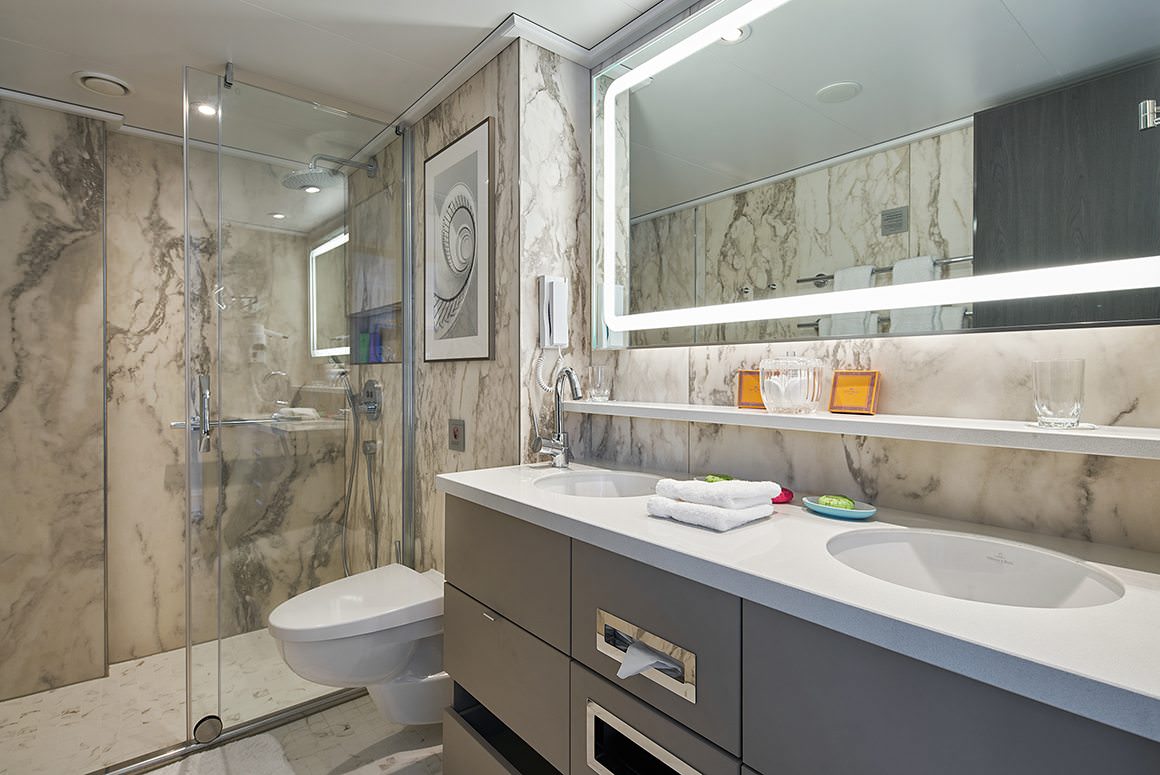 Sister-ship Crystal Mahler will join Crystal Bach before the end of the year. Two additional ships, Crystal Debussy and Crystal Ravel, will enter into service for Crystal River Cruises next year.

Bookings are now open for all vessels. 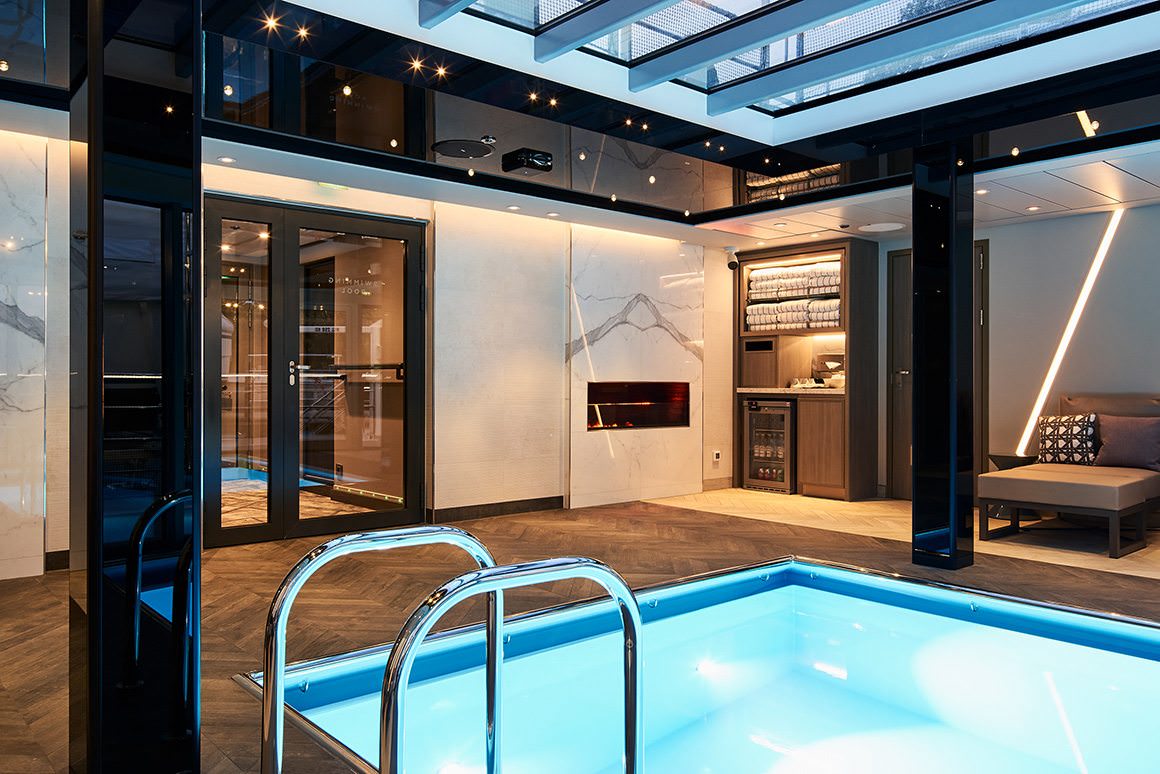 Onboard Crystal Bach, cool off with a dip in the ship’s indoor swimming pool. Photo courtesy of Crystal Cruises.