My post, What I Learned About Viking River Cruises While Cruising The Rhine, drew a lot of questions from readers. Chief among them were questions about food & service and the quality of the excursions. Reader Dianne Slotnick was among those who asked about the dining experience, including the quality of wine served free of charge during lunch and dinner. My answers (and reader questions) follow below. 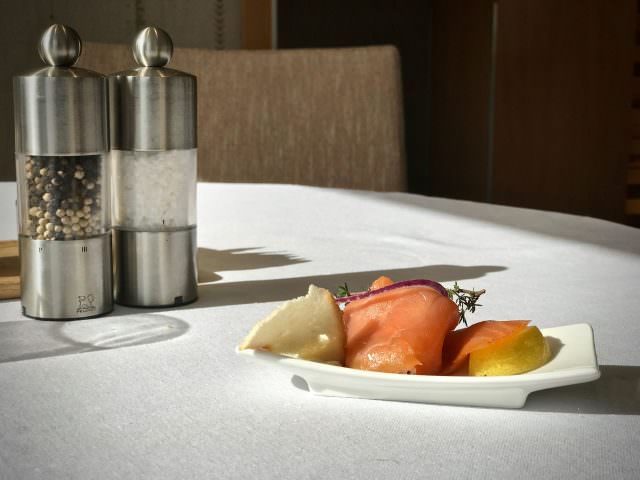 Norwegian Salmon, a staple on the Longships. © 2017 Ralph Grizzle

A. I traveled with my neighbors, and we all agreed that Viking’s food and the quality of wine were more than satisfactory. In fact, I would rate the food and wine as quite good, but I don’t have a highly refined palate, so take that for what it’s worth. We were happy with the offerings at breakfast, lunch and dinner, including the complimentary wines.

One food item that we really enjoyed was the Norwegian salmon served at the Aquavit Terrace – as well as in the dining room during breakfast. My understanding is that Viking River Cruises’ Norwegian-born chairman, Torstein Hagen, demands quality salmon from his homeland. Other items that we appreciated: fresh berries – raspberries, blueberries and strawberries – on the breakfast buffet. I don’t know that I’ve ever seen such an abundance and such variety of berries on a river cruise.

The overall dining experience may not have been high gourmet, but dining on Viking was equivalent to what I have had on most of its competitors. In the competitive set a notch higher, Crystal, Scenic, Tauck and Uniworld spend somewhat more on food and wine than river cruisers with rates at lower price points (such as Viking), but the higher spending on food reflects the higher cost of entry on the upper-tier competitors.

Q. You didn’t mention the quality of those port excursions that were included. Were they good, bad, or just mediocre? How about the cabins at the stern of the vessel, knowing that the floor plan is the same as other cabins but would they be less quiet and have more/intense feeling of vibration as a result of the vessel movement? – Cool

I too am a fan of Viking. I’ve been on two cruises with them (Tulips and Windmills from Amsterdam and the Elbe River from Berlin to Prague) and have been very impressed with their food, service, and overall quality. Love the audio boxes and home visits they offer on excursions. I’ll be on the Portugal River of Gold cruise with a group of clients this October and can’t wait. – Jolynn Wiesinger Haven

As for Cool’s question about the suites and cabins at the rear of Viking Hlin, I did not get a chance to experience those or to speak with anyone in the rear accommodations. I did ask the hotel manager about vibration, however. He told me that the staterooms and suites were well insulated (and cushioned) to eliminate vibration and said that he had not heard complaints from guests.

There was one comment that deserves further response from a reader commenting on a section in What I Learned About Viking River Cruises While Cruising The Rhine. When you say this: “There’s no room to store bicycles. Viking optimized space on the Longships to focus on public spaces and to add more staterooms and suites than you’ll find on other river cruisers” what you really mean is that Viking chooses to cram more passengers onto it ships by far than any other river cruise line. All River Cruise boats are the same size reguardless of which line we are discussing. They would just rather put more paying passengers on them provide benefits such as bikes. And of course they have to pay for the thousands of pounds worth all the direct marketing they put into everybody’s mailbox every year. You shouldn’t make Viking out to be something that it isn’t. This is not a luxury river cruise line, rather it is a mass market river cruise line. – name withheld

While the reader makes some valid comments – I agree, for example, that bikes are a huge benefit that nearly all other river cruise companies provide – it’s not fair to say that Viking crams passengers on its ships. Staterooms are sufficiently roomy, larger than some of Uniworld’s staterooms, for example (see the chart below). Public areas are spacious. Viking has two dining venues whereas some river cruisers have only one, and there seems to be plenty of space in the lounge.

Our sailing was running at about 85 percent occupancy. I never felt as if the ship was crammed or crowded. Maybe if it were full, Viking Hlin would have felt more crowded, but my sense was that the Longship could have absorbed additional guests and handled them fine.

It’s true that Viking is not a luxury river cruise line, as the reader suggests, but I would add this, it’s not a luxury liner – for everyone. But for some it is. Some readers of this blog would consider all-inclusive beverages to be one of the hallmarks of a luxury river cruise product. Others (non-drinkers, in particular) have told me that they feel as though they are paying for the other guy’s imbibing on river cruises that include beverages, outside of the traditional beer and wine with lunch and dinner that is served at no cost on all river cruisers.

Moreover, for many, the following, which are found on Viking’s Longships, are features of a luxury product: leather hand railings, heated bathroom floors, attractive staterooms that are sufficiently large, two-bedroom suites, the Aquavit Lounge & Terrace, beautiful Nordic furniture and tasteful Scandinavian decor – and a staff that is professional and personable.

Viking is taking the position of “affordable luxury.” The company does not provide the generous crew-to-guest ratio that Crystal provides, or the bikes and gyms that many other river cruise companies offer for their guests, or all excursions, which Crystal, Scenic, Tauck and Uniworld offer. But two people can cruise on Viking for about $400 less per day than on the all-inclusive players, and that is factoring in optional excursions, gratuities and the Silver Spirit Beverage Package on Viking, which makes it an all-inclusive package. From my time with Viking on the Rhine, I discovered that the company offers an engaging river cruise experience on ships that rival, and perhaps surpass, those of many top-tier operators – and Viking does that at prices that appeal to the masses.

There are a ton of variables when comparing river cruise companies, including staff-to-guest ratios, stateroom sizes, inclusives such as gratuities, booze, excursions and much more. My goal with this chart was to take a company like Viking River Cruises that offers an optional all-inclusive beverage package and compare pricing with all-inclusive river cruise companies. If nothing else, think of it as the basis for a broader discussion.

Included in my analysis are twice the number of optional shore excursions that Viking says its guests take on the Viking Rhine Getaway itinerary. I felt this was necessary in order to match the tours offered by other cruise companies in this chart. - Ralph Grizzle