You are here: Home / Cruise Companies / Pandaw Cruises / The Exotic World of Pandaw

Pandaw has made a name for itself in Southeast Asia, where it offers river cruises that explore the wonders of the Mekong River between Vietnam and Cambodia; expedition sailings to China; and journeys along Myanmar’s Irrawaddy. But those are just the tip of the iceberg. Hidden within the line’s 2017 itinerary lineup, a world of adventures await in areas that most other cruise lines simply don’t sail to.

Flowing through India, China and Bangladesh, this 2,900 kilometer (1,800 mile) long river is an important waterway for navigation and irrigation. At its southernmost reaches, it is also considered sacred to Hindus thanks to its rare male name. Most rivers are female; but “putra” means “son” in Sanskrit.

Flowing through the Assam Valley, guests travelling with Pandaw along the Brahmaputra are taken in style aboard the MV Mahabaahu. Built in Kolkata in 2012, the ship was specifically designed for this river. The MV Mahabaahu carries a maximum of 46 guests and boasts all the usual public spaces that river cruisers have come to expect, including a panoramic lounge, an elegantly-appointed restaurant, an onboard shop selling local wares, and even a swimming pool. Pandaw states that the vessel has “the largest public space to passenger ratio of any river cruise ship in the world,” though that should probably be taken with a grain of salt (surely Crystal Mozart would be a contender). Still, the MV Mahabaahu appears to be a comfortable ship for what promises to be an exceptional journey.

These weeklong cruises from Guwahati to Jorhat traverse the northeastern reaches of India, not far from the border with Myanmar, which is still sometimes referred to as Burma. The names of the ports aren’t likely to mean much to the traveller unfamiliar with the region, but the experiences offered by the onboard expedition team certainly will. Guests can take safaris by small boat, jeep and even ride an elephant in search of the Greater One-Horned Indian Rhinoceros and Indian tiger. Pandaw also offers a sort of cultural program with the “Mishing” people who live on the world’s largest river island, along with trips to tea plantations and other important locations. 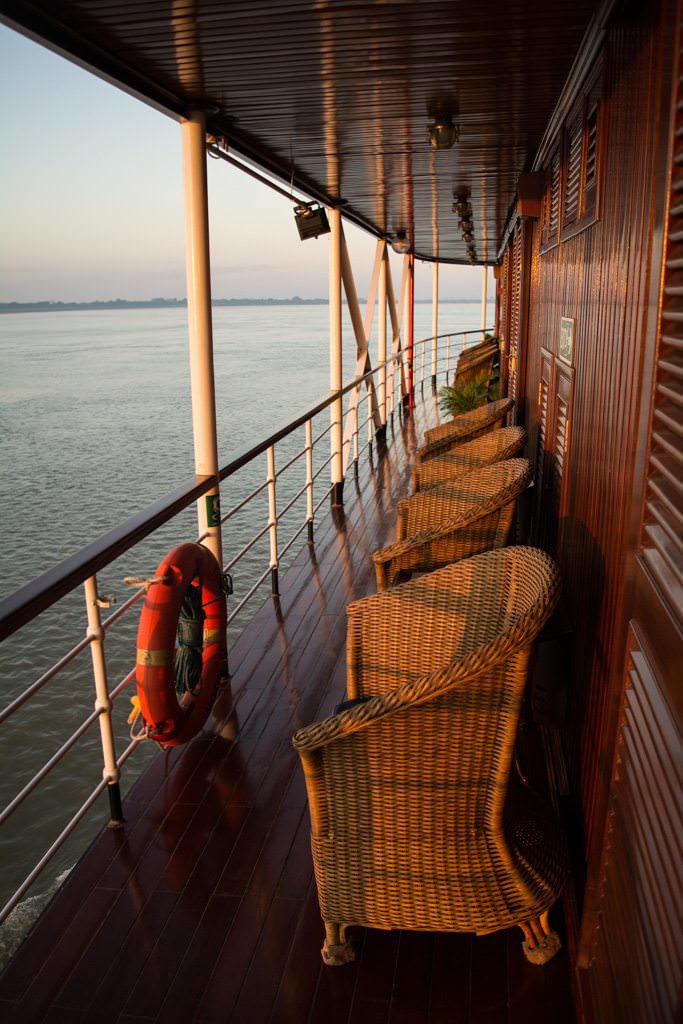 Step back in time on the Laos Mekong with Pandaw. Photo © 2015 Aaron Saunders

As with India’s Ganges, voyages along the mighty Mekong River are certainly not uncommon in the world of river cruising. But Pandaw’s 10-day exploration of the Laos Mekong is decidedly unique; so much so that the company has become the first to offer a full river cruise through Laos since the war.

Most Mekong river cruises travel from Siem Reap, Cambodia to Ho Chi Minh City, Vietnam, or reverse. Not this one. Beginning in Vientiane, Laos, this itinerary explores the northern reaches of the Mekong, skirting the borders of Laos, Thailand and Myanmar, before ending in Chiang Saen, Thailand.

The itinerary here is flexible, owing to conditions on this part of the Mekong that can change rapidly. Pandaw even advises guests that changes to the proposed itinerary are likely to occur. However, like a good expedition cruise, this only heightens the sense of discovery for what each new day will bring as guests traverse this remote region of the Mekong.

Sailing aboard the 20-guest Laos Pandaw or her 28-guest sister-ship, Champa Pandaw, these cruises explore local villages, authentic markets, and the natural wilderness of Laos. The actual ports of call aren’t as important as the genuine opportunity to interact with the locals in a way that would be impossible to achieve on your own.

This is one of Pandaw’s newest itineraries, having just begun in the fall of 2015. Even getting two new ships to this region required no small amount of effort; when the line’s usual shipyards couldn’t deliver, Pandaw founder Paul Strachan stepped in and purchased two powerful barges and converted them from cargo to passenger use. Since then, this itinerary has proved so popular that a second ship had to be added just last year.

If you think you’ve checked the Mekong off your bucket-list, think again.

Pandaw may specialize in river cruises through Southeast Asia, but that hasn’t stopped it from launching its own product along the legendary Amazon River.

Guests will journey down the Amazon River aboard the 18-guest Amazon Dream, travelling for 14-nights from Rio to Santarem, Brazil. This great cruise tour includes nine nights on ship, along with a three-night stay at the Sofitel Hotel, Rio de Janeiro (or similar), enviably located on Copacabana beach. Following the cruise, guests then fly to Iguacu for a 2-night stay at the luxurious Hotel das Cataratas uniquely located next to the jaw-dropping Iguacu Falls.

The major draw here is nature. The Amazon is an idyllic paradise like no other, filled with flora, fauna, and wildlife at every turn. Like other Pandaw river cruises, expedition-style shore excursions are offered into local villages, markets, and towns, all of which are designed to showcase the unique way of life of those who call the banks of the Amazon River home.

Photographers, birders and nature lovers will adore this trip, which presents unique viewing opportunities for a vast array of wildlife.  Although this itinerary isn’t suitable to those with walking difficulties due to the rugged and undeveloped nature of the towns and landing sites, it remains one of the most exotic river cruises in the world – one that Pandaw seems uniquely qualified to deliver.

The Ultimate River Cruising Handbook is available in print and digital formats. The book includes 2019 pricing charts for all rivers and all major river cruise companies. Get your copy now.
END_OF_DOCUMENT_TOKEN_TO_BE_REPLACED