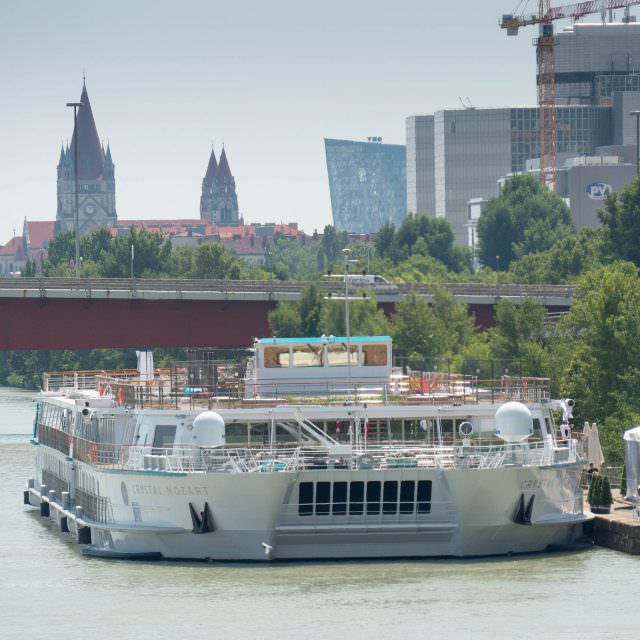 I was on Crystal Mozart for fewer than 48 hours. Even so I quickly came to appreciate what Crystal Cruises, a leader in luxury blue-water cruising, was attempting to create on the Blue Danube.

I should note that I had no choice but to make a quick study. Two nights on board, and I was to be booted off. I was part of a VIP group in Vienna for Crystal Mozart’s christening. After the bottle had broken against the hull, we were expected to start packing to make room for paying guests on Crystal Mozart’s inaugural voyage.

To introduce Crystal Mozart, Crystal had to take “The Queen of Europe’s Rivers,” as the vessel is affectionately known, down to her steel structure and build her back up. It was no easy task, especially with the clock ticking toward the ship’s christening date in Vienna.

The restoration was done in Linz, Austria. Transforming the ship took more than 400 shipyard workers going at it around the clock. “We went through every single inch, both technically and from a hotel point of view,” says Crystal Cruises COO Thomas Mazloum. “We had 14 different contractors, two to three different designers, working the last couple of months in three shifts, 24 hours a day to get it finished in time.”

And so it was that in July of 2016, Crystal River Cruises introduced a river cruiser that was as beautiful as it was innovative. It was a remarkable feat. In 2009, I sailed on Mozart when it operated for Peter Deilmann River Cruises. Touring Crystal Mozart in Vienna, I saw hardly any vestiges of the old vessel. Simply, Crystal Mozart was stunning and appeared to be a new ship.

Staterooms and suites carried familiar amenities: Crystal bathrobes and kimonos, Etro toiletries and even Crystal-logo shopping and laundry bags similar to those that you will find on Crystal Symphony and Serenity.

Complementing Crystal Mozart’s elegance are some innovative itineraries and shore programs. Crystal aimed to differentiate itself from the other major players in this region with what it offered ashore. For example, on Crystal Mozart guests can choose to dine ashore in one of nine Michelin-starred restaurants at no additional cost once during each cruise.

Crystal Mozart is a beautiful vessel with unique attributes and activities, a good choice for those wanting the style and sophistication of Crystal Cruises, on the Blue Danube.

Want To Experience Crystal Mozart On The Danube?

In 2017, Crystal Mozart will offer 26 departures on the Danube with fares beginning at US$3,535 per person. The ten-night cruises, roundtrip Vienna, begin on April 2 and continue through December 23, perfect timing for the Christmas markets along the Danube.

Links to my “voyage” recap:

Next Up: Boats & Bikes With Backroads & AmaWaterways