River cruises are a wonderful vacation choice. Active, educational and immersive, they’re a great choice for couples looking for an alternative to big-ship cruises or long, monotonous overland tours by motorcoach. 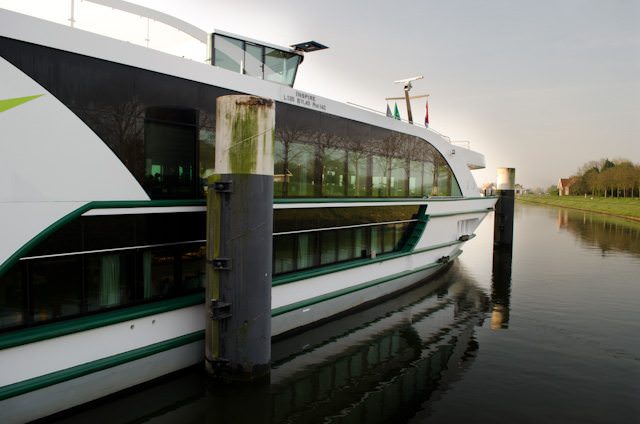 River cruises are a wonderful way to vacation. Unfortunately, they are not known for being inexpensive. Photo © 2014 Aaron Saunders

One thing river cruises aren’t, however, is inexpensive. Most river cruises come at a relatively high price point when compared to ocean cruises, running thousands of dollars per person for even off-season itineraries. And that’s before you add international airfare, pre-and-post hotel stays, and other expenses.

But can you take a river cruise inexpensively? Yes and no. To be clear, you’re always going to be able to take a Carnival cruise to the Caribbean for far less than any river cruise. But those two things are so dissimilar that it’s like comparing a five-star Orient Express rail journey to a Mexican all-inclusive resort: They can’t be compared because they’re designed for two very different types of people.

If you’re on a budget, here’s a few things to consider when you’re researching your next river cruise.

Watch For The Deals

The best way to save money on a river cruise is to watch for deals, specials and sales that river cruise lines are running right now. Thanks to the downturn in travel to Europe, there are some really amazing deals on for 2016 and 2017 river cruises on the Danube, Rhine, and Main.

These sales can be as simple as price reductions or stateroom category upgrades, but can also include significant savings on airfare from major gateways in the United States and Canada. What’s more, your favorite travel agent might be running additional deals on top of that, so it always pays to visit the website of your cruise line of choice and pop into a standard ‘brick-and-mortar’ travel agency to see if they have any concurrent specials.

One of the better methods for reducing your overall vacation cost – particularly on a European river cruise – is to see if you can use your accumulated airline points towards transatlantic airfare. It takes a lot of points, but even one complimentary ticket can dramatically cut down on costs for airfare to and from Europe, which can be quite pricey during the popular summer months. Additionally, we’re big fans of using your points to upgrade your airplane experience by purchasing low-cost economy-class tickets and upgrading to Business or First with your miles.

One last thing to consider is cruising closer to home. While many U.S.-based lines plying the Mississippi, Columbia and Snake Rivers aren’t exactly giving their cruises away for free, the relatively lower cost of airfare and the benefit of not having costly currency conversions can really save a lot of money in the long run.

It’s still not going to get down to Caribbean cruise-style pricing, but if you’re in the market for a river cruise, you may find your overall cost dramatically decreases when you take those expensive transatlantic flights out of the equation.

Do you have any ways to river cruise inexpensively? Let us know by using the comment form below!