You are here: Home / Cruise Companies / AmaWaterways / This Week: Bicycling Along The Danube With AmaWaterways, But First A Few Days In Prague 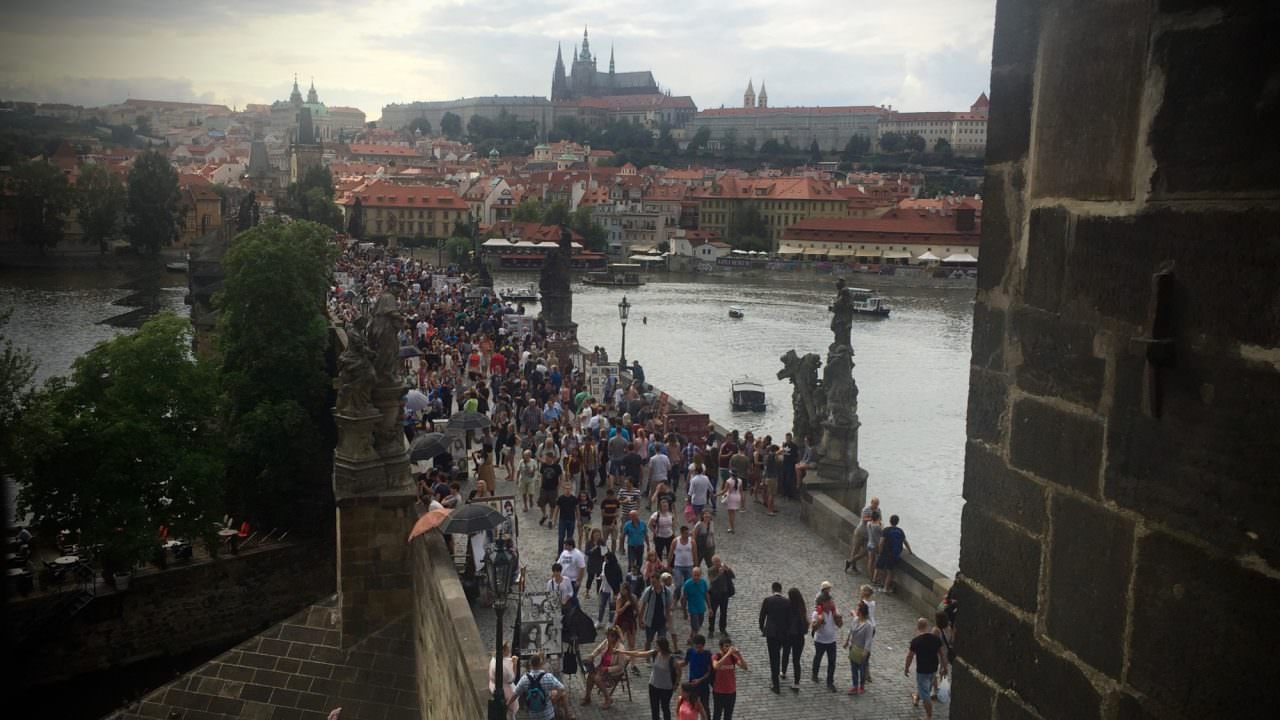 Saturday, on the Charles Bridge in Prague. © 2016 Ralph Grizzle

This week, I am fortunate to be mixing several of my passions: travel in Europe, river cruising, bicycling and spending quality time with one of my favorite people.

Tomorrow morning, my 19-year-old son Alex and I will begin a bicycling adventure from Vilshofen, Germany to Budapest, Hungary. Google Maps tells me that we’ll be covering a distance of approximately 700 kilometers (434 miles). Approximately, because the river meanders — and also because we will not be pedaling the entire distance. Our time will be split between straddling a saddle and cruising on AmaWaterways’ beautiful AmaSonata.

Each day, our rides will vary from 17 kilometers (11 miles) to 74 kilometers (46 miles), and we will have lots of options thanks to a program designed and executed by Backroads, which bills itself as the “world’s #1 active travel company.”

If we feel motivated and powerful on day one, for example, we’ll take the tougher of two routes offered, 41 kilometers (26 miles) with a 366-meter (1,200 feet) gain in elevation, compared to the easier ride of about half that distance and half the elevation gain. Both routes will take us along the Danube river valley from Tittling, Germany, to Vilshofen, where we’ll join the ship.

Our trip actually begins in Prague, though. We’re staying for three nights in the Hilton Old Town, our home base for exploring this beautiful city. Our first night was more of a scratch (as in “didn’t count”), as we arrived at the hotel after 9:30 p.m., exhausted from our flights that took us from Asheville, North Carolina, via Atlanta and Paris, to Prague. We mustered the energy to go out for a beer and snacks, refreshingly inexpensive, at a local bar (as an interesting aside, we spotted four bottled beer brands from Asheville, America’s beer city, where we have more than 40 microbreweries).

We tucked in after midnight and awoke not “to an alarm” but “alarmed” when we realized that it was 12:45 p.m. the next day before we broke our jet-lagged slumber. Good thing we had an extra day to explore Prague. We would need it.

After a coffee for me and a Coke for Alex, we set out to explore Prague. We started with a brisk walk along the river Vltava, where tour boats were chugging along, dense on the river and all full of tourists. Across the river and high up on a hill was the majestic Prague Castle, dating from the 9th century, and according to the Guinness Book of World Records, ranking as the world’s largest ancient castle. It is the official residence of the President of the Czech Republic and a major tourist attraction.

Our destination for the afternoon was the famous Charles Bridge. The bridge dates from 1357, and until 1841, it was the only bridge to cross the Vltava, connecting Prague’s Old Town with Prague Castle. Equally as fascinating as the bridge’s age is its architecture. The stone bridge features a gothic-style tower near the Old Town, often photographed and less often climbed. That’s a pity. It costs only about US$3 to climb to the top for views over the bridge, river and the Old Town, a view that is well worth the price of admission.

Along the bridge, 30 statues and statuaries, most of them baroque-style, were originally erected around 1700 but now all replaced by replicas and frequently framed by tourists snapping photos.

After about 15 minutes of walking, we reached the bridge and passed under before going up on top. First, we’d have lunch. We found an inviting restaurant by the river, with comfortable seating and only a few tables, not one of the overly crowded tourist restaurants we had passed along the way here. We ordered two Greek salads, with sparkling water. As we dined, a couple posed for wedding photographs down by the river bank. The groom-to-be lifted the bride-to-be, holding her in his arms while the photographer snapped photos of the couple against the backdrop of the Charles Bridge. Three German-speaking girls at the table beside us gasped in admiration of the romantic gesture. No doubt, those photos soon will find a lovely place in the newlywed’s home or in their photo album. 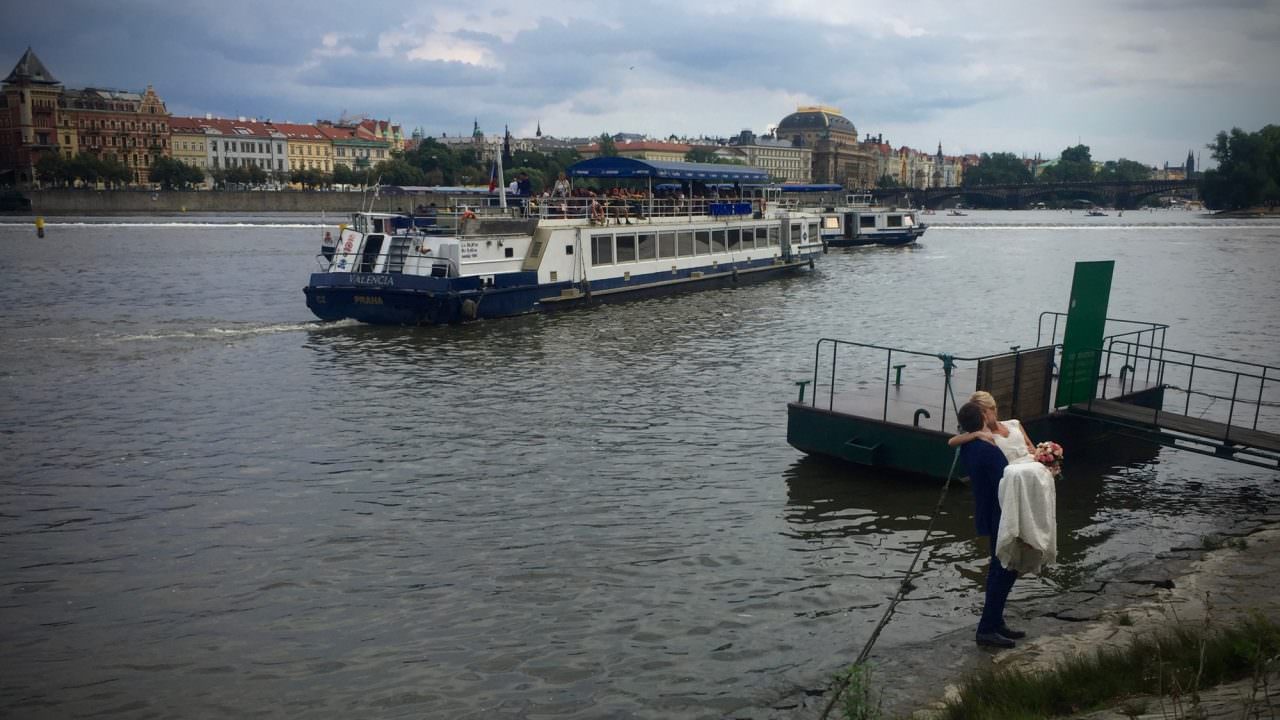 We ordered a Red Bull that we shared to get us caffeinated and paid our bill (about US$14), then proceeded up the stairs and onto the Charles Bridge. It was as if there was a festival going on. The bridge was a bustle of activity, more grooms and brides-to-be, tourists brandishing selfie sticks, musicians and entertainers, three young people holding cardboard signs reading “Free Hugs.” Alex and I each took a hug from one of the three. A 20-something-year-old girl opened her arms and drew me in, giving me a solid and heartfelt hug. What a nice gesture in a world that sometimes seems as if it is unraveling at its seams.

Prague is an exceptionally beautiful city, heel-to-toe with tourists when we walked across the Charles Bridge and along the streets of Prague’s Old Town. It occurred to me that if isolated incidents of terrorism are keeping many Americans away from life-enriching adventures in Europe, few other nationalities are allowing their freedom to be trampled on. Prague was full of tourists, thankfully many Americans among them, living life to its fullest.

To those who are cowering in perceived safety at home, I ask, Why put your life on hold? Flaunt your freedom, as Alex and I did during our first couple of days in Prague, and as hundreds of thousands are doing at this very moment. Europe is bustling with tourists and life-enriching adventures. Come get a free hug on the Charles Bridge. It felt darn good, and it’s something we could all use, and distribute more frequently ourselves, these days. 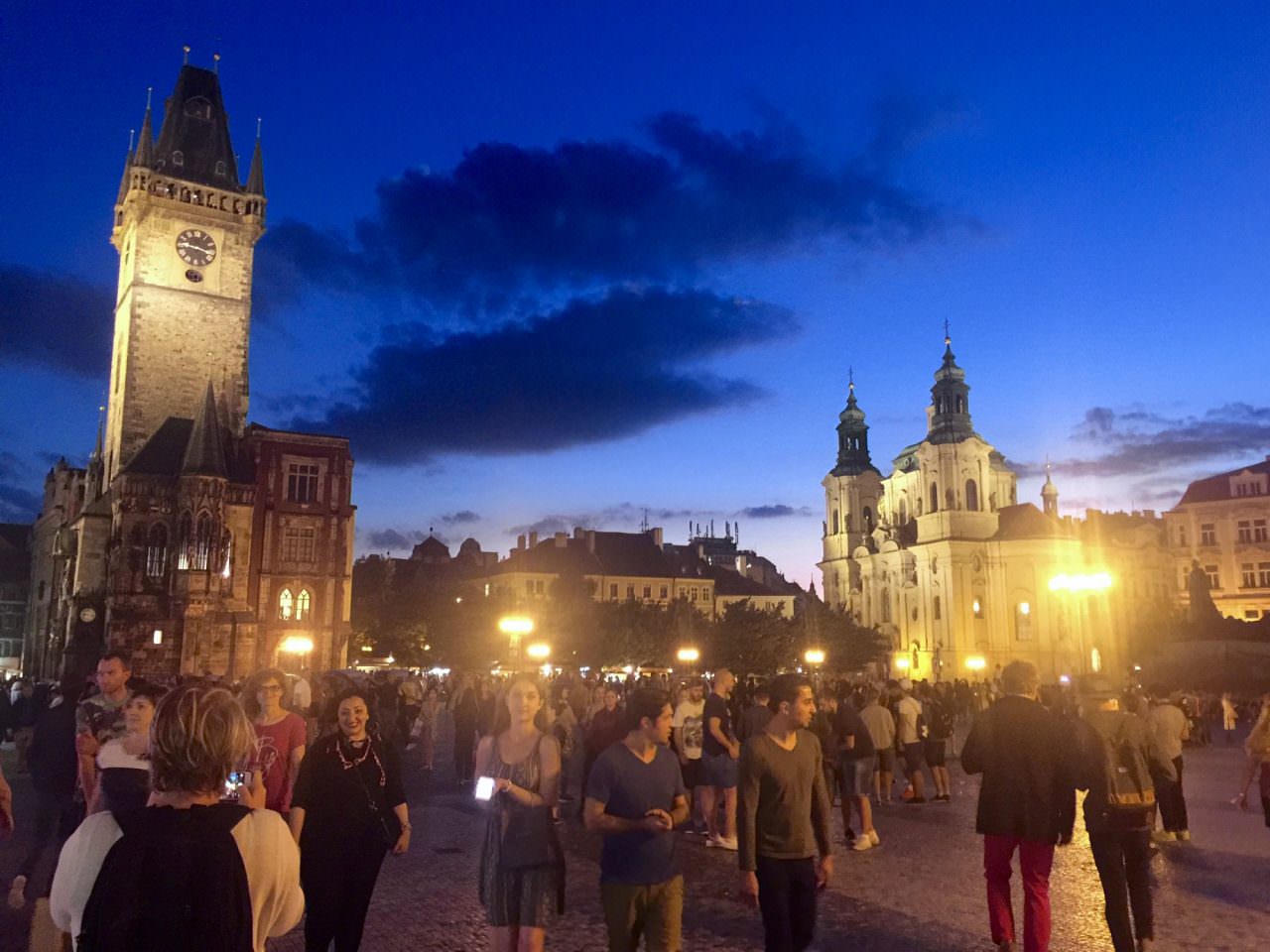