You are here: Home / Cruise Companies / Viking OCEANS / From The Rivers To The Oceans: 7 Reasons Why Viking Sea May Just Be The Best Ship Sailing – And 1 Reason Why It Is Not 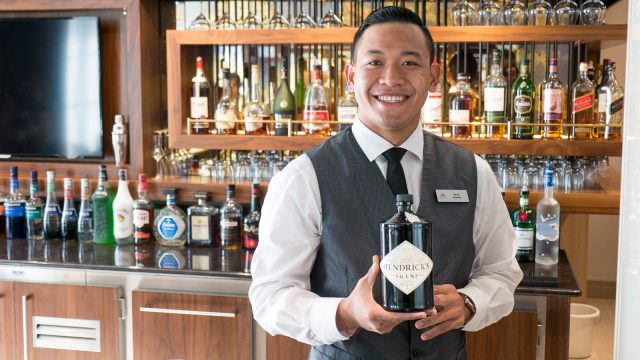 Panji, a bartender at the Viking Bar on Viking Sea. © 2016 Ralph Grizzle

Some companies are dipping their toes into both segments: Viking River Cruises spawned Viking Ocean Cruises; Crystal Cruises is launching Crystal River Cruises; Scenic river cruises has announced Scenic expedition cruises. Other companies, AmaWaterways, for example, have added luxury-cruise-like components such as fine-dining venues, The Chef’s Table, and partnered with well-known brands, such as Backroads and Adventures by Disney.

Nowhere is the continuity between river cruise ships and ocean cruise ships more apparent than on the new Viking vessels – a fact that may change once Crystal enters the fray. Last week, I sailed on Viking Sea from Barcelona to Lisbon. As on Viking Star the year before, I noticed many similarities between Viking’s ocean and river vessels, but this time a new question emerged: Are Viking’s new vessels the best ships on the oceans? What follows is a look at how one river cruise company has launched a successful pair of ocean cruise ships.

In Manfredi’s, one of four restaurants open for dinner on the new Viking Sea, I take a bite of the Bistecca Fiorentina. I’ve had the steak before, on Viking Star last year, and my reaction tonight is the same as it was back then. Pure bliss. The tender beef melts in my mouth. Unequivocally, the Florentine Steak is the best I have had on land or at sea, and that includes at a particularly good restaurant in Florence. The best Florentine steak I’ve ever had was in Manfredi’s on Viking Sea (and Star). A bit of fun: Manfredi’s is the Italian steakhouse on the Viking vessels named for Silversea Cruises’ chairman Manfredi Lefebvre, a friend of Torstein Hagen. © 2016 Ralph Grizzle

Viking’s new ocean ship does things right, from the delicious steak in Manfredi’s to the thoughtfully designed pull-out mini-bars in staterooms, “so that you don’t have to bend over to look in the refrigerator,” says Erling Frydenberg, whose business card reads “Owner’s Representative, Cruise Operations Development.” Attention to detail On Viking Sea: Mini-bars pull out so that you don’t have to bend down – or squat – to see the contents. © 2016 Ralph Grizzle

Frydenberg is the eyes and ears of his friend Torstein Hagen, chairman of Viking Cruises. The two were instrumental in developing Royal Viking Line, which, during its heyday in the 1980s, set the gold standard in luxury cruising. Some say that Frydenberg was (and is) the best hotel manager in the business. Along with Viking Sea’s talented General Manager Karl Eckl (who came over from Seabourn a few years ago), the pair certainly run a tight ship — and a much loved one.

“I walk around and listen to guests all day,” Frydenberg told me over coffee in Viking Sea’s Mamsen’s, the Norwegian bistro named for Torstein Hagen’s mother. “What I hear from the guests on a fairly consistent basis is that they haven’t found a ship that has such a calming effect on them.”

That perhaps is the most interesting attribute I’ve heard ascribed to a ship, and probably the most accurate one.