You are here: Home / Destinations / Europe / Romania / Bucharest / Enchantment Of Eastern Europe, Bucharest To Budapest On Emerald Sky Part I 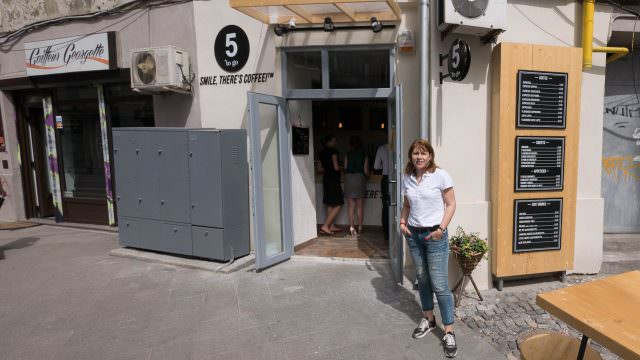 ‘I love Romania,’ she said. ‘I would never want to live anywhere else but my country.’ In Bucharest, experiencing the Enchantment of Eastern Europe with Emerald Waterways. © 2016 Ralph Grizzle

At the newly opened “5 To Go” in Bucharest, Romania, all items sell for just 5 lei each (about US$1.25). Cappuccino, 5 lei; croissant, 5 lei; freshly squeezed lemonade or orange juice, only 5 lei. The store is clean and compact with a menu that lists only a couple aozen items. But what 5 To Go lacks in selection is made up for in price. Moreover, the shop’s low prices reflect the relative bargain that Romania, and Eastern Europe, represents for visitors. How much of a bargain? I spoke with two couples who told me that the night before they had dined sumptuously for about $15 each. Their three-course meal even included wine.

It’s not just bargain travel that attracts visitors to Eastern Europe, however. The region is culturally rich, steeped in tradition yet still transitioning from the Eastern Bloc, which crumbled more than a quarter of a century ago. Soviet-era buildings stand among modern shopping centers in Bucharest while in neighboring Bulgaria the Soviet-era passenger car known as the Moskvitch can still be seen chugging along modern European-Union funded roads.

While Eastern Europe may appear familiar to those who have traveled Western Europe (you’ll find H&M and Starbucks in the big cities, for example) it can also be as exotic as the East. The Balkan fruit brandy rakia, for example, is said to have originated from raki, the unsweetened, anise-flavored Turkish alcoholic drink introduced to Bulgaria and elsewhere during the Ottoman rule. 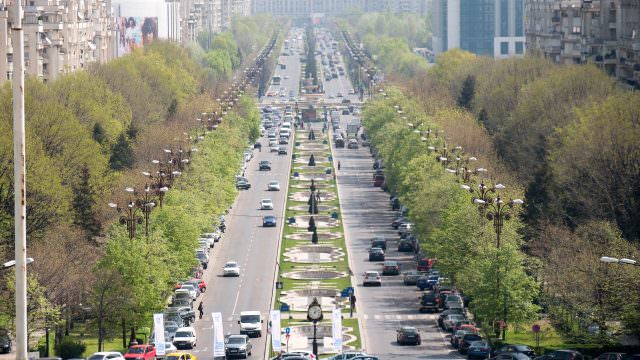 Foreign yet familiar: The city’s wide avenues have a distinctly French feel, so much so that Bucharest is often referred to as the ‘Paris of the East.’ © 2016 Ralph Grizzle

The familiarity combined with the foreign is, in part, what made Emerald Waterways’ Enchantment of Eastern Europe itinerary so appealing to me. I’d never been to Romania or Bulgaria. Nor had I transited the gorge known as the Iron Gates. My 10-night voyage started with two nights in Bucharest, followed by a one-week cruise that will end in Budapest. My experiences, a little more than midway through the trip, have been varied and rewarding, with some wonderful shore experiences that I will highlight in this post followed by a post later this week featuring Emerald Sky. 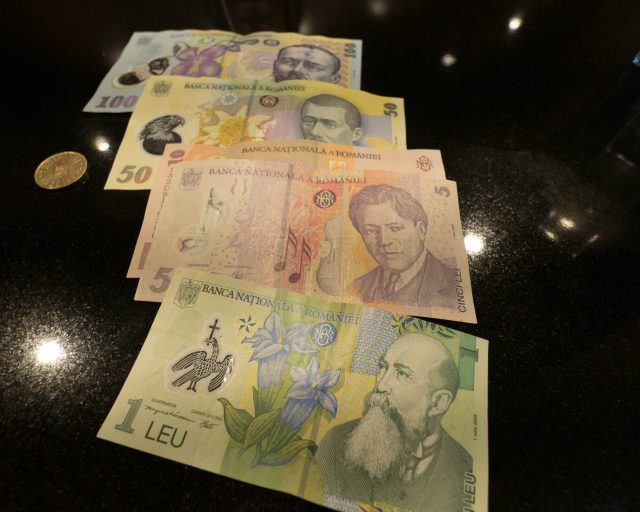 I dropped into 5 To Go for a cappuccino instead of at Starbucks, only a few blocks away. The frothy beverage from the local business was just as tasty as the pricier version from the worldwide brand. When I stepped out with coffee in hand, the shop owner was out front arranging tables. She asked where I was from. When I answered the United States, she smiled and said that she had been to New York and Washington.

“What did you think?” I asked. She said she had enjoyed both cities but added that she had been overwhelmed by the bright lights and busy streets. By contrast, Bucharest moves at a slower pace than the Big Apple or the U.S. capital.

“I love Romania,” she replied. “I never want to live anywhere else but in my country.”

“The nature, the people,” she said. “We are Latin people at heart. We love to talk, we love being with our friends and family. We make time to enjoy life.”

La Dolce Vita? Sipping my cappuccino, hearing the locals speak in a language related to Italian and passing sidewalk cafes on my short walk through the Romanian capital, I could have just as well been in Italy. The resemblance has some historical bearing. Romania derives from Latin for “Citizen of Rome.” The Romans were here, of course, as they were in much of Europe. 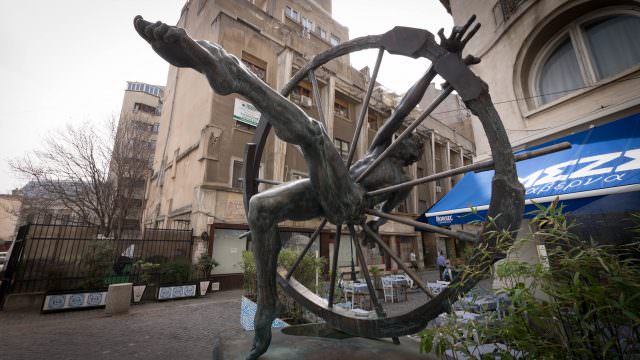 Our home for the two-night stay was the Sheraton Bucharest, centrally located, and in a neighborhood with good shops and restaurants, although taxis are exceptionally cheap in Bucharest if you care to venture out beyond comfortable walking distance. On our first full day, we toured the enormous Palace of the Parliament, the second largest administrative building in the world, after The Pentagon in the United States. 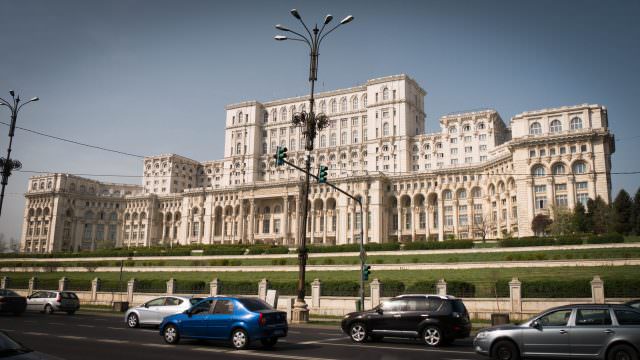 Bucharest boasts the second largest administrative building in the world after The Pentagon In Washington, D.C. © 2016 Ralph Grizzle

Often referred to as the “People’s House,” the Palace of the Parliament boasts some unusual numbers. It is, for example, the world’s heaviest building, according to the Guinness World Records. The numbers: 700,000 tons of steel and bronze; 35,300,000 million square feet of marble; 3,500 tons of crystal glass and 31,700,000 square feet of wood. All of that and only 400 rooms and two meeting rooms are finished and used, out of 1,100 rooms. 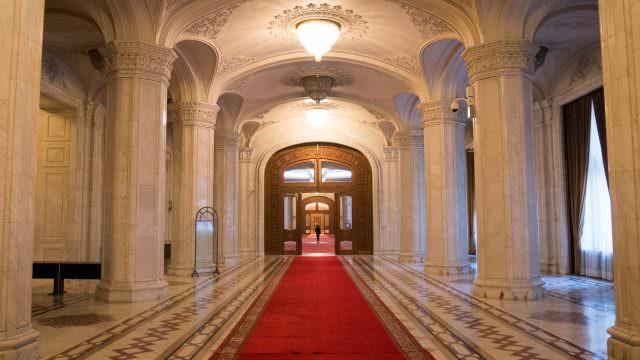 Seemingly endless halls at the Palace of the Parliament. © 2016 Ralph Grizzle

We spent about 90 minutes on a guided tour of the palace. Photos were allowed for those who paid a fee of 30 lei (about US$7.50). Our guide, Florina, was excellent, communicating in perfect English. She cited more numbers: The palace was estimated to have cost €3 billion to build. There are 80 kilometers of underground tunnels connected the building to the airport, a precaution undertaken by the brutal Communist dictator Nicolae Ceaușescu, who was overthrown and executed in 1989, the year that marked Romania’s break from Communist rule. 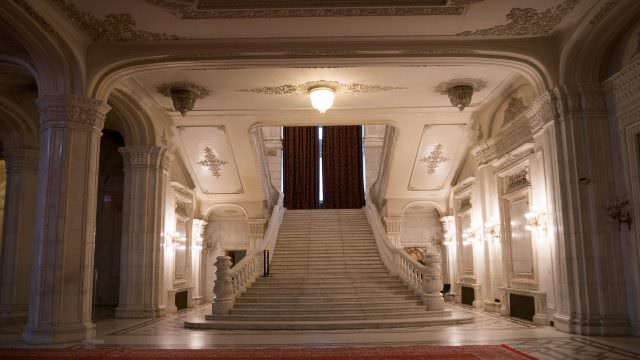 Inside the Palace of the Parliament. © 2016 Ralph Grizzle

Ceaușescu had started construction of the building in 1984, destroying 18 churches and monasteries on Uranus Hill to make room for the building, Florina told us. As many as 100,000 workers were involved in the construction. Some were forced to work three shifts. A few sources cite that as many as 3,000 workers died during the building of the palace. 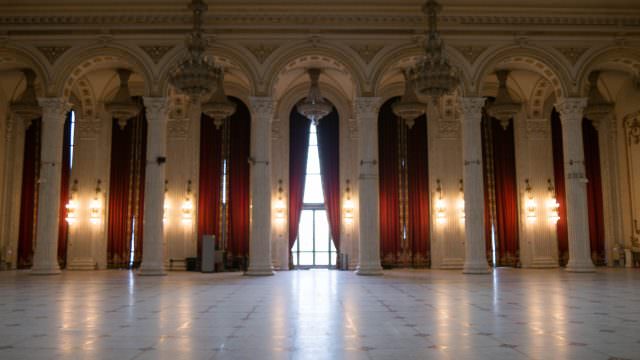 Inside the Palace of the Parliament. © 2016 Ralph Grizzle

The palace features eight underground levels, the last one being an antiatomic bunker, linked to the main state institutions by about 12 miles of catacombs. Fearing nuclear war, Ceaușescu had the bunker built with thick concrete walls that radiation could not penetrate. At the end of our  tour, Florina revealed that we had seen only 3 percent of the palace, an amazing fact considering that we had spent more than an hour touring its palatial rooms.

In Search Of Dracula 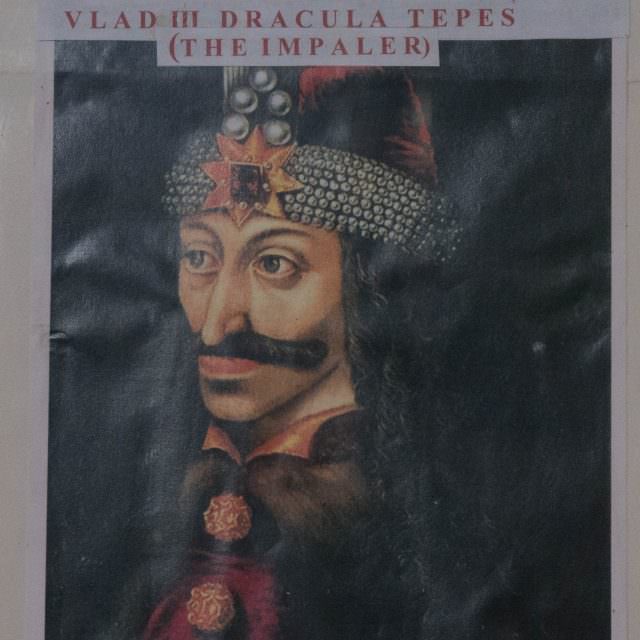 Vlad III Dracula, the ‘prince’ who inspired the eery legend of the blood-sucking vampire. © 2016 Ralph Grizzle

The next day we checked out of the Sheraton before beginning a half-day tour that would take us a little more than 20 miles north of Bucharest to the Snagov Monastery. Afterward, we would head to the Danube River, a couple of hours away, to board Emerald Sky.

What attracted me to the optional Snagov Monastery tour? The monastery is also known as “Vlad the Impaler’s Monastery.” And who was Vlad the Impaler? He was the man who gave rise, through the writer Bram Stoker, to Count Dracula. 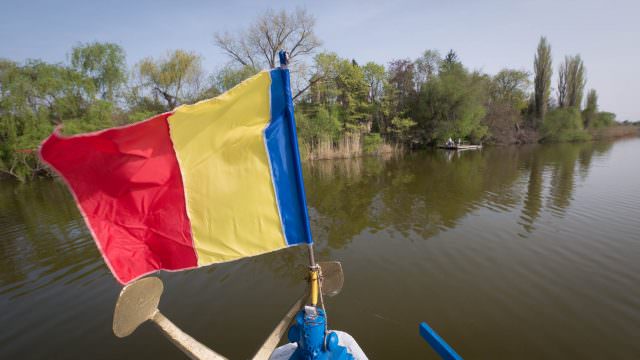 Will we find that Dracula has been at Snagov Monastery? First we’d need to get there, by boat © 2016 Ralph Grizzle

Vlad III Dracula Tepes was a real person. Born in Transylvania (one of six regions in Romania), he lived in the 1400s and ruled Wallachia, often using brutal methods to maintain peace and order. His most infamous method: impalement. However cruel, it was a method that repelled invading Greeks, and thus, despite his cruel methods, Vlad III is remembered as someone who defended his nation against invaders. 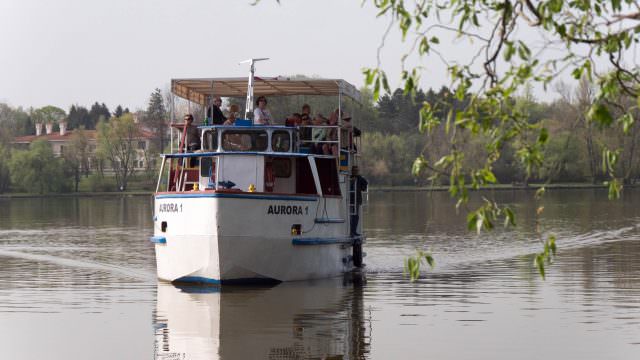 A beautiful day on the Snagov lake. © 2016 Ralph Grizzle

After arriving by bus, we took a quick bathroom break, then boarded a small boat to take us across Snagov lake to the Snagov Monastery. The site dates from the 1300s, endowed by Vlad’s father, prince Vlad Dracul (Vlad the Devil), and later by the son, according to documents I looked at in the chapel. Vlad the Impaler built a bridge as well as a tunnel for escaping the island and a jail. “This is why the inhabitants of the neighboring villages are considering him to be the founder of the monastery,” the church document reads. 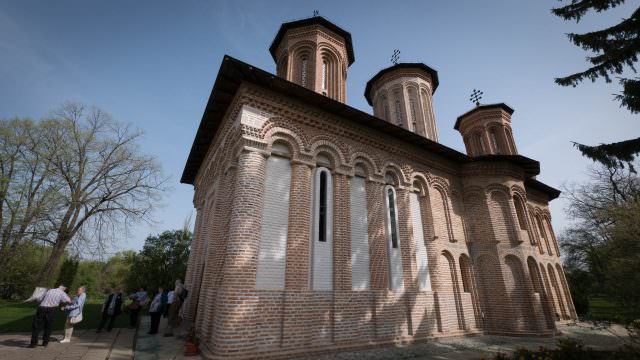 Without indicating how the first church was destroyed, the documents said that the present day church was built by another prince between 1517 and 1521. Much of the interior has been restored and recreated. But was Dracula really buried here? 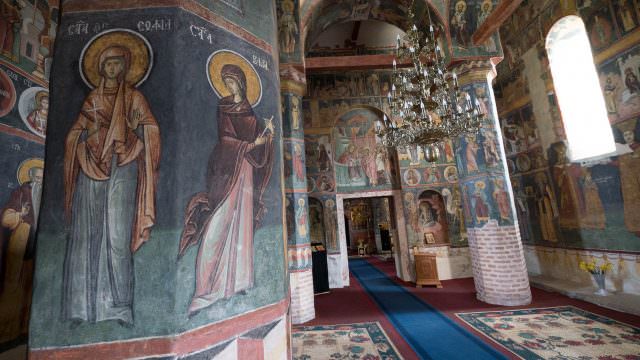 Looking for the tomb of Vlad III Dracula. © 2016 Ralph Grizzle

“In front of the altar it is supposed to be the tomb of the former prince Vlad the Impaler,” the church document reads. Sure enough, there is a tomb with a framed likeness of the prince. Vlad the Impaler was killed in 1476, with various sources saying that he was killed near the island of Snagov. “Undisputed,” one document reads, “is that his head was sent to Constantinople, where the sultans had it displayed on a stake.” 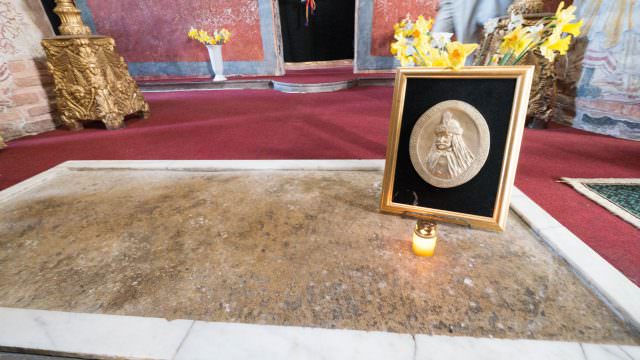 As for his body? “Reportedly his torso is buried at the monastery of the island of Snagov,” the document continues.

I chose to suspend my skepticism as I stood before the tomb of a man that some considered their savior (he repelled the Turks, after all) and some considered satan for his cruel methods of killing enemies and criminals and who the Irish novelist Bram Stoker conjured into the vampire known as Dracula, giving Vlad the Impaler immortality, after all.

On To Emerald Sky

After our visit to Snagov Monastery, we made our way back to Bucharest for one last look at this fascinating city and for lunch at Caru’cu bere, one of the oldest restaurants in Bucharest. Though my dish of chicken and potatoes was nothing to write home about, the atmosphere at the old restaurant made lunch enjoyable and worthwhile. 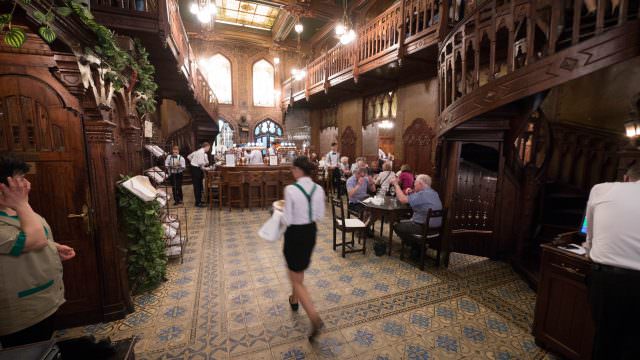 We enjoyed an included lunch at Caru’cu bere, one of Bucharest’s oldest restaurants. © 2016 Ralph Grizzle

After lunch, we had a few hours in the bus to reach Giurgiu, Romania, situated on the Danube, where Emerald Sky was waiting for us. Unfortunately, this would be the last time our shoes would touch Romanian soil on this trip. For the next couple of days, we’d be visiting Bulgaria, which would turn out to be equally as fascinating as our time in Romania. 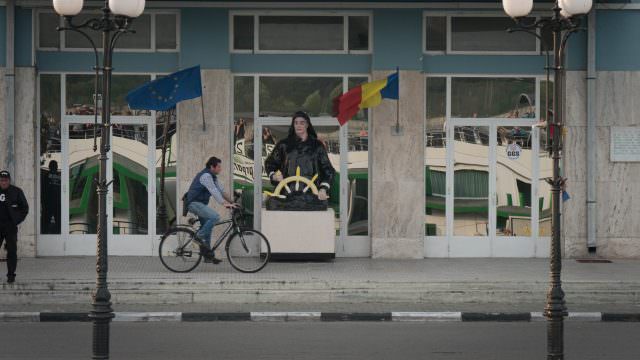 At the terminal in Giurgiu, Romania. © 2016 Ralph Grizzle

I’ll be writing more about Emerald Sky at the end of this booklet. For now, I’ll simply say that I am impressed with the ship. It’s modern, light-filled and comfortable, but I hold other thoughts until my Emerald Sky review.

Before the sun dipped below the horizon, we sailed away from Romania, though she’d remain off of our port side as we backtracked toward Silistra, Bulgaria. 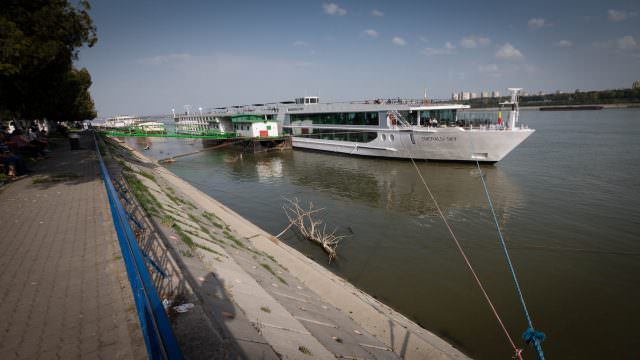 As we departed, I found myself thinking about how much we had experienced in Romania. We’d been in the country a mere 48 hours, and while I can’t say that I know Romania fully, I can say I know more about it than I did before my visit here.

Our guides imparted a lot of information during our visit and gave us context that we simply could not have gotten by Googling or watching a television show back at home. If you really want to experience a place, you need to go there to take the tours, walk the streets and talk to the people.

Bucharest may not rank as highly as New York or Washington in population and sheer energy, but for those who want to experience a little of the Latin lifestyle in Eastern Europe, as the shopkeeper Alina characterized her country, a couple of days in Romania’s capital city may be just the ticket.

Our next stop, Bulgaria, as our Enchantment of Eastern Europe itinerary continues along the Danube. 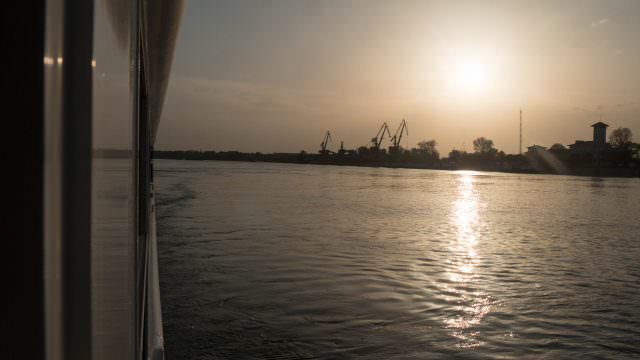