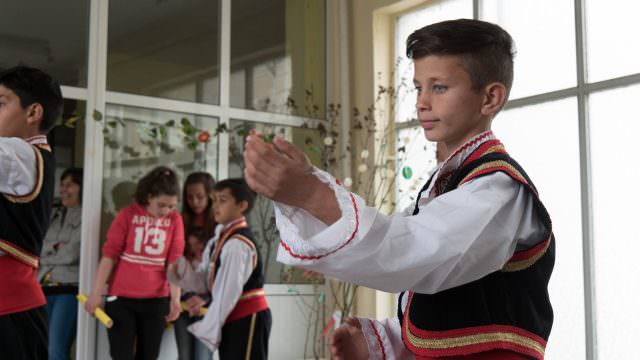 Dressed in traditional costumes, children sang and danced for us in Alfatar, Bulgaria, at a school supported in part by Emerald Cruises. © 2016 Ralph Grizzle

Though I’ve been globe-trotting for decades, today would mark the first time that I would set foot on Bulgarian soil. I have Emerald Cruises to thank for helping me notch a new country — two, in fact, as I also visited Romania for the first time on this trip.

On day 4 of our Enchantment of Eastern Europe itinerary, Emerald Sky docked in Silistra, Bulgaria, following an overnight sailing from Romania. Something that has always been presented as a plus for river cruising is that you can unpack once and see several different destinations in one trip. In all, Emerald Sky will take us to five countries, all five once part of the former Eastern Bloc.

The ease with which we’re visiting these places is remarkable. Emerald Sky is a floating hotel (and a nice one at that) with features that you’d expect to find at a quality hotel or on another river cruiser — lounge, restaurant, staterooms, suites and gym. But Emerald Sky has other features that are not so common on the rivers — an indoor pool that converts to an evening cinema, with popcorn, for example. There are also bicycles on board for complimentary use ashore, as well as spa treatment rooms for those who would like to spend a bit of time being pampered.

As our ship quietly motored along last night, we enjoyed dinner with complimentary wine and beer. In Emerald Sky’s attractive restaurant, near floor-to-ceiling windows framed the river perfectly. One of my favorite moments on the rivers, in fact, is watching the river ripple away from the edges of the boat as we make our way up, or in this case, down-river.

After dinner, I had a beer in the lounge while listening to live music and returned to my balcony stateroom shortly after 11 p.m. Feeling refreshed following a good night’s sleep under a cozy duvet, I opened my balcony curtains to look out on Silistra, Bulgaria. Unlike yesterday when the sky was blue and bright, the sky today was gray and dull. The gangway led from Emerald Sky to a waterfront promenade and park where the centerpiece was a World War II tank and a cluster of ancient ruins alongside the river. 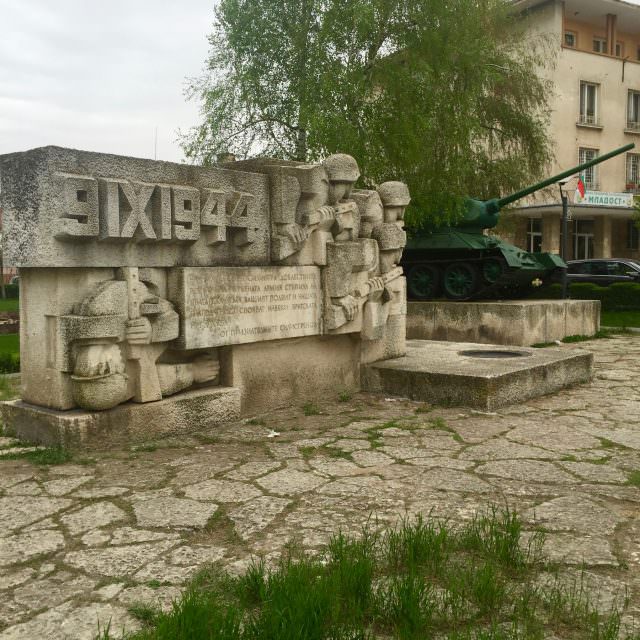 I was eager to get out and explore a place that I knew nothing about. Bulgaria was part of the former Eastern Bloc, and as I learned on my tour later in the day, the poorest country in the European Union. That poverty showed as we made our way by motorcoach from Emerald Sky to Alfatar, a village less than an hour away.

From the window of a bus it’s foolhardy to make assumptions about a place, but from what I was seeing it was safe to say that Silistra did not appear to be the world’s happiest place. It appeared much like the sky and many of the Soviet-era buildings that we were passing — gray.

Toward the outskirts, we passed a shanty town of sorts and then to the wide open road and past fields of golden rape (known as Canola). We arrived in less than an hour in Alfatar, where boxy old cars puttered along streets that horses and carriages also used. One thing was clear: We were a long way from fairy-tale Europe. “You won’t see this on river cruises in Western Europe,” Emerald Sky Cruise Director Jana Pakstaitis told me back on the ship. She was referring to the continuing struggle to transition from a communistic society to a free market society.

“The other type is the guest who wants to learn about these places,” she added. “These countries were behind the Iron Curtain. You see the real life of these countries in the hinterlands. These are not touristy destinations. You see how the transition has affected people.”

Today, we experienced firsthand how the transition has affected people. Our included excursion took us to a local school in Alfatar that Emerald Cruises supports through financial donations given on behalf of its guests.

Dressed in traditional Bulgarian costumes, the school children greeted us as we walked through the door into the school. Deyan Belev, a 17-year-old, translated questions that I asked to the school’s director. Deyan related that most of the 120 children at the school came from troubled homes. Twenty-six of the students had special needs that required the services of a psychologist, a speech therapist and two teachers who work with special needs kids. Deyan added that the children also were given nutritious lunches, something they may not get at home. 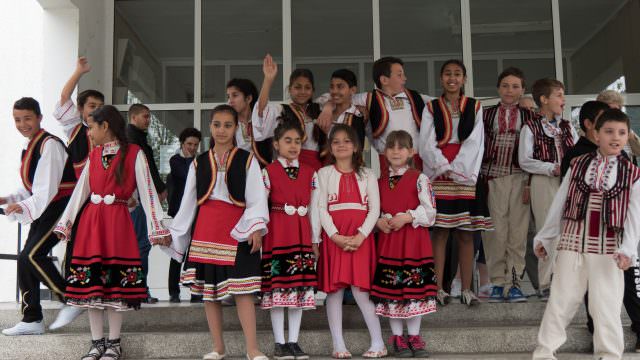 We toured the school and learned more about the program for the kids. Afterward, the children performed songs and dances for us. A few things stayed with me from their performances. The first was two girls who held hands the whole time while performing. Neither of them would have been more than 10 years old. The way they consoled and comforted one another was touching, and I thought of my own daughter and the sweet innocence of children.

The other thing that stayed with me was a boy who had no costume. I don’t know why. He was happy to sing, however. His face too was one of innocence. My heart went out to these kids. Some of them, perhaps all of them, had suffered abuses and needed love and attention. 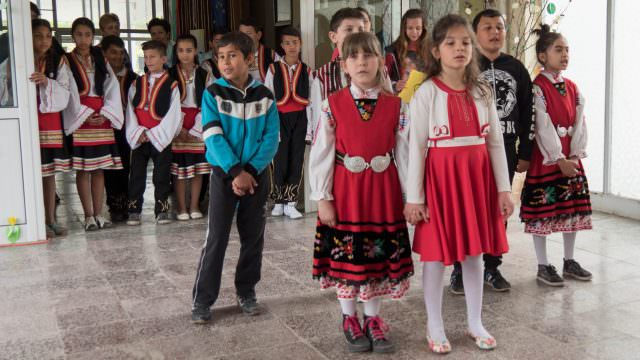 The two girls up front held hands during the whole performance. © 2016 Ralph Grizzle

“There were winners and losers during the transition from communism to democracy,” Jana the cruise director told me later. Her own country, Estonia, was one of the winners. “Hungary was also one of the winners, the Czech Republic, Slovakia, Poland, but Romania and Bulgaria were definitely on the losing side,” she said. “If you go through the Bulgarian countryside, you can see factories that are shut down, their windows are broken. Nowadays there is a lot of unemployment so the young people leave.” 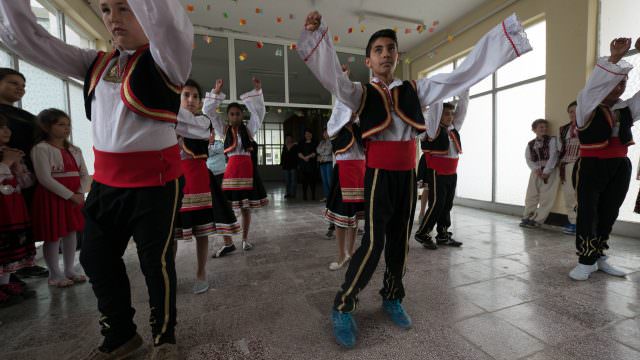 Will these young people also leave? No one can say for sure. What we do know is that they likely will be better prepared for whatever comes their way because of the efforts of the school and the teachers who care about them.

The school’s director thanked our group for coming. She said of the school’s efforts: “We managed to bring the kids to such a level that they can participate in regional and national competitions in different subjects.” 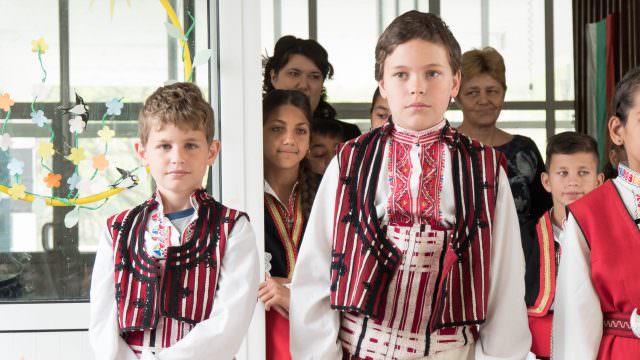 The boy on the right won an English-language competition. © 2016 Ralph Grizzle

She pointed to one bright young boy who had won a regional English-language competition. He stood rigid as she announced his achievement. The audience applauded him. The director said that three of the kids with special needs had won first prize in a tournament on painting. Another round of applause. 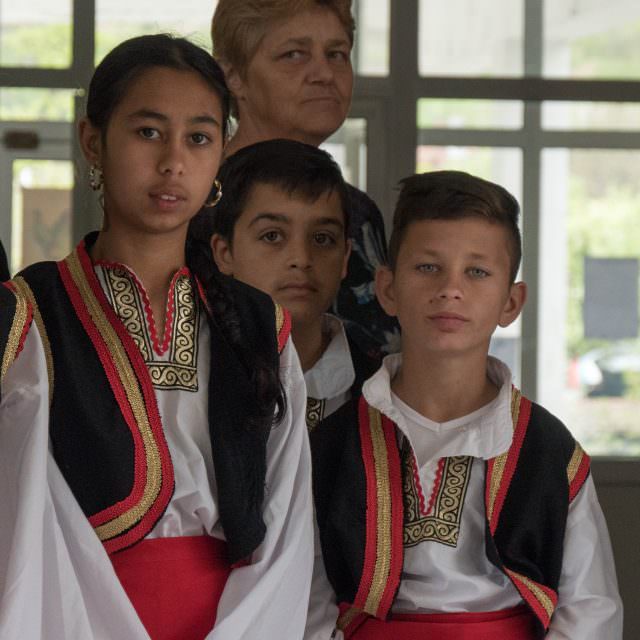 The faces of Bulgaria speak to the hard times the country is experiencing. © 2016 Ralph Grizzle

We weren’t done yet, though. After leaving the school, we strolled through Alfatar with our guide, stopping at a surprisingly modern tourist information center, where we were able to try on – and be photographed in – traditional Bulgarian farmer’s clothing. I donned the garb and posed for a few photos. 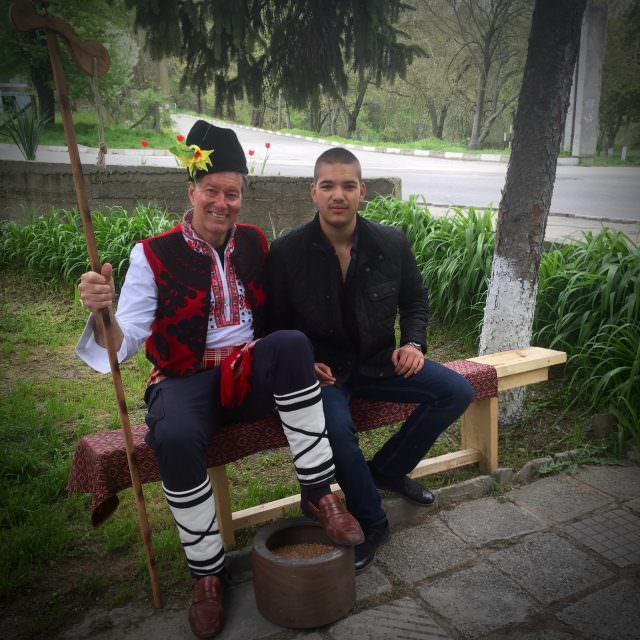 I got a chance to try on a Bulgarian costume. Seated with 17-year-old Deyan who translated for me and showed me around Alfatar. © 2016 Ralph Grizzle

We then headed to an Ethnography House, where we would see how life was once lived in rural Bulgaria. 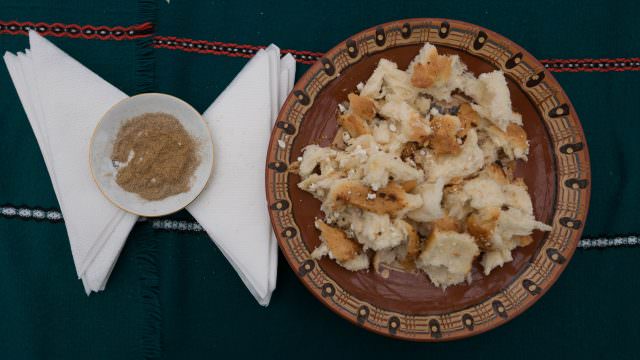 Traditional Bulgarian welcome at the ‘Ethnography House.’ Guests take a piece of bread, with feta-like cheese in it and dip into ‘multi-colored’ salt. © 2016 Ralph Grizzle

We were greeted in a traditional Bulgarian fashion, with feta-cheese bread called Tutmanik, which we were instructed to dip into “multi-colored salt” (pictured at left above). That was followed by an apricot rakia, the traditional fruit brandy that has been consumed in Bulgaria for more than 600 years, similar to the Turkish raki.

There was a brief performance of traditional music and a tour of a house representing how homes looked in the past. As the clock ticked toward noon, we were back on the bus and back to Emerald Sky in Silistra. Again, I am impressed with how much we have experienced so far on this trip. 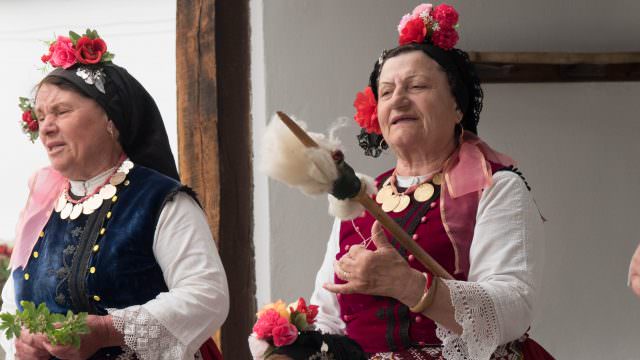 After a relaxing afternoon and evening on board Emerald Sky, we sailed overnight and docked in Ruse, Bulgaria. A full day tour was ahead of us. We’d travel to a hilltop town, Veliko Tarnovo, and then to a village called Arbanassi before joining the ship again in Nikopol.

As we traveled the hinterlands by bus, Bulgaria was revealing itself just as Jana (remember our cruise director?) had said it would appear, with shut-down factories and generally the feeling of a place still emerging from its past the way that one awakens from a deep sleep.

A Communist nation until the Eastern Bloc collapsed in 1989, Bulgaria remains the poorest nation in the European Union. Average monthly wages in Bulgaria are about US$550. 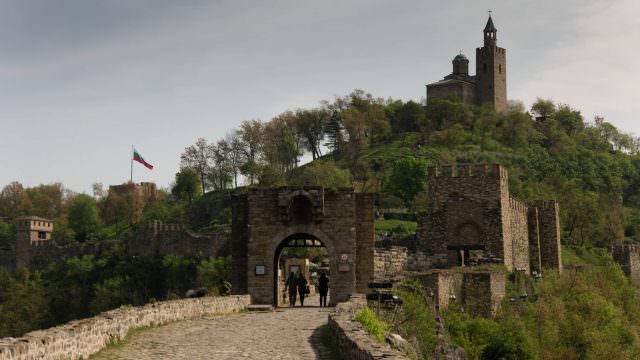 In Veliko Tarnovo, we toured the former capital of the Bulgarian empire known once as the “City of the Tsars.” This was mostly a photo stop with lunch at Hotel Yantra in the city center and free time to shop on the “handicrafts” street. 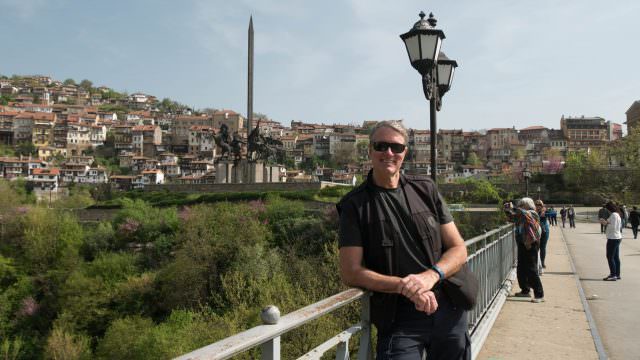 In front of The monument of the Assens. 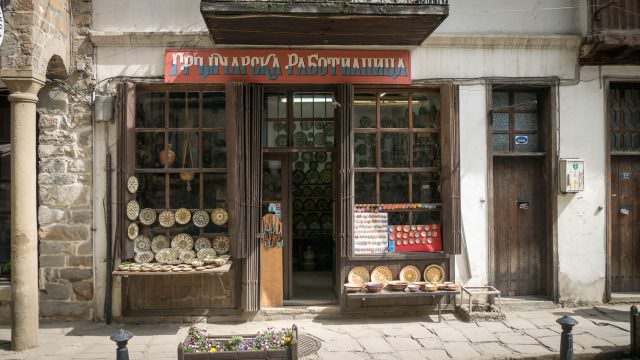 Our next stop was Arbanassi, a historic town perched on a high plateau overlooking the Yantra valley and famous for its traditional houses as well as its 17th and 18th-century churches. 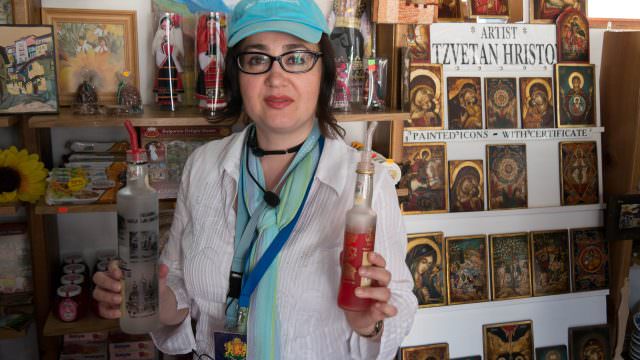 We sampled a rose liqueur served by our wonderful guide. © 2016 Ralph Grizzle

The region is also known for its roses, and we sampled rose products, such as a light rose liqueur.

A cappella performance at the church, Saint Archangels Michael and Gabriel. © 2016 Ralph Grizzle

We then visited a few churches, including Saint Archangels Michael and Gabriel, where we listened to a wonderful a cappella performance, and then to the Christ Nativity Church. Both churches had wonderful frescoes.

A cappella performance at the church, Saint Archangels Michael and Gabriel. © 2016 Ralph Grizzle

We rejoined Emerald Sky in the town of Nikopol. Tomorrow, we’ll transit the narrow gorge between the European Alps and the Carpathian Mountains known as the Iron Gates, which forms the border between Serbia and Romania.

“It’s a fascinating region,” Cruise Director Jana said of the region comprising the five countries we would be visiting on this cruise. “It’s very diverse and it keeps changing.” 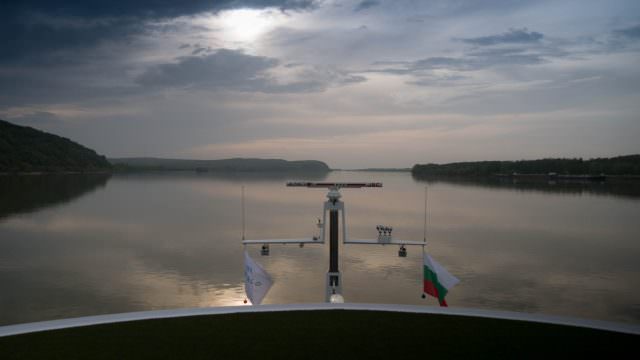