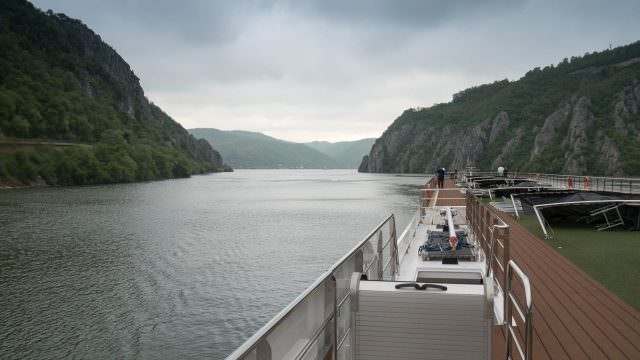 Emerald Sky took us through the Iron Gates, which run for about 134 kilometers (83 miles) between Serbia and Romania. © 2016 Ralph Grizzle

After leaving Bulgaria, Emerald Sky proceeded upriver along the Danube. Our destination was Belgrade, Serbia, but first we’d need to pass through a couple of locks and, more significantly, the Iron Gates. The latter is so-called because of a passage where the Danube cuts through a narrow gorge between the European Alps and Carpathian Mountains. It’s not a tight squeeze, but it is a beautiful one. 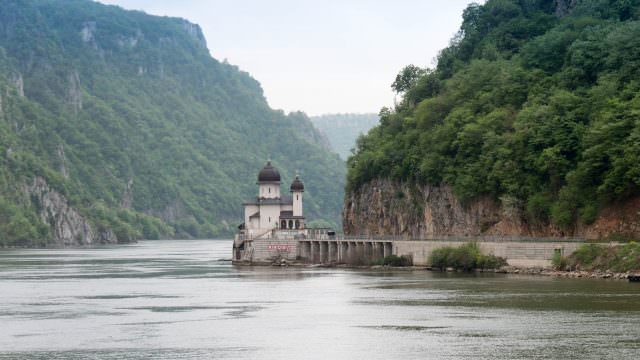 In 1853, an article about the Danube in The Times of London referred to this stretch of river as ‘the Iron Gate.’ © 2016 Ralph Grizzle

The passage spans about 134 kilometers (83 miles) and features spectacular scenery. It also forms the border between Serbia and Romania. Emerald Sky gave us a particularly scenic transit during the late afternoon. Many of us were out on deck and others watched from the lounge as we passed the rock sculpture on our starboard side known as Decebalus. The 40-meter-high face carved into a cliff represents the last king of Dacia. 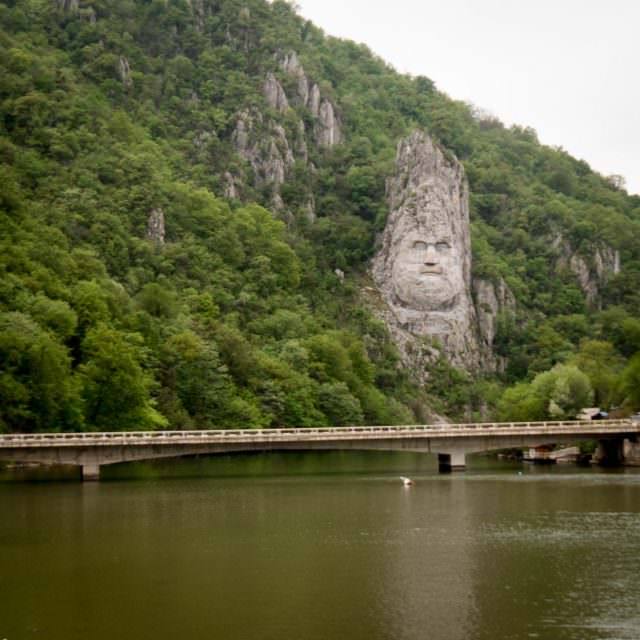 We passed the rock sculpture of Decebalus during our transit of the Iron Gates. © 2016 Ralph Grizzle

Decebalus fought against the Roman emperors Domitian and Trajan to preserve the independence of what is today modern Romania. The sculpture was made in honor of him between 1994 and 2004, commissioned by a rich Romanian businessman. 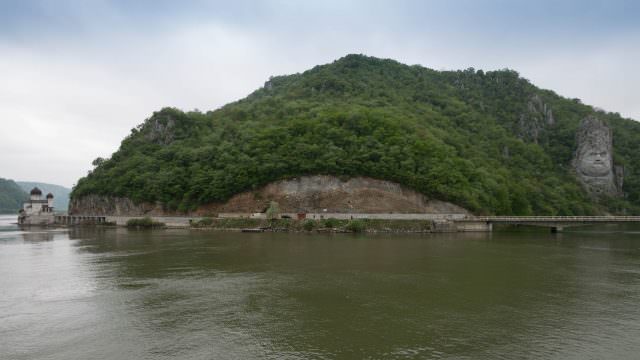 Rock sculpture of King Decebalus and an Orthodox church during our transit of the Iron Gates. © 2016 Ralph Grizzle

Night fell as we transited the Iron Gate. To our port side was Serbia, our third country on this voyage. I am beginning to think of our trip as a cultural kaleidoscope. With each twist in the river, we were seeing different patterns of life in societies who shared a common history (the Turks and Romans conquered them all) and remain bound together by the Danube, that beautiful river that flows into the Black Sea and carries with it such a powerful history.

The next morning, Emerald Sky was tied up alongside a fairly new cruise terminal in Belgrade. Again, the skies were gray and the air a bit chilly. Our included tour would show us the city during the morning and have us back on board for lunch. In the afternoon, shuttles would operate between the ship and city center. For those who preferred to walk, we were not more than a 10-minute stroll from the pedestrian shopping street. 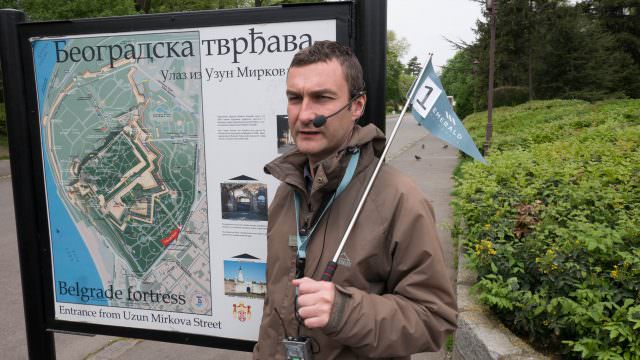 Miloš Jevtovic, our guide in Belgrade, mixed humor with insights about Serbia’s capital city during our morning tour. © 2016 Ralph Grizzle

We boarded one of four motorcoaches, each of which carried around 40 guests. Our guide Miloš Jevtovic mixed humor with insight and knowledge to give us an overview of Belgrade and Serbia. “We used to produce the Yugo car,” he said to our group as the motorcoach was making its way through the city. “Maybe you have heard of it?”

A number of hands shot up. “Oh, that’s not good for you.”

Introduced in the United States in 1985, the Yugo was the constant subject of ridicule. By 2000, NPR’s Car Talk declared it “the worst car of the millennium.”

Jevtovic explained that the Yugo is “very small and always falling apart, even when you are driving.”

He began to point them out as we were driving through the city. “We have a rule,” he continued, “that if you are driving down the road and see a Yugo part, you must pick it up, because one day you will use it.” 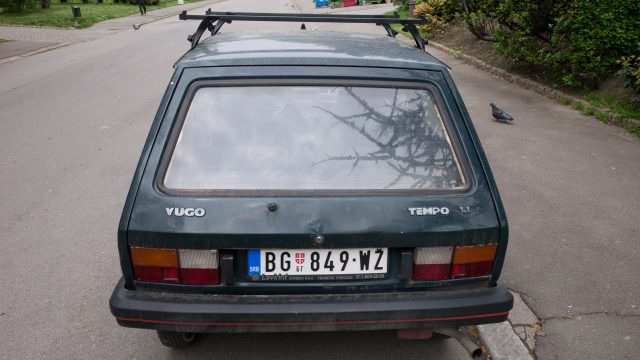 We passed the Hotel Moskva, which Jevtovic told us was one of the oldest hotels still operating in Europe. The hotel was used as Nazi Germany’s Gestapo headquarters from 1941 until October of 1944. 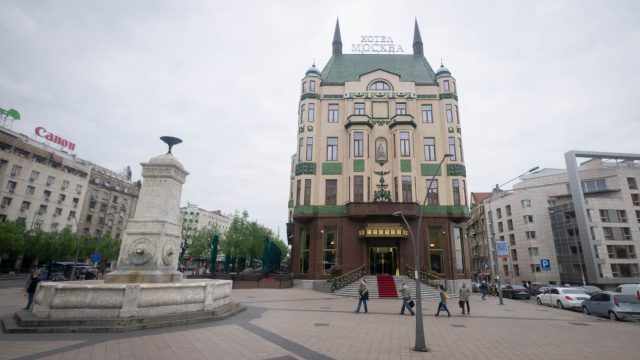 We saw scars of a more recent war during our tour this morning. During the Kosovo War, NATO bombed Belgrade in an attempt to stop human rights abuses in Kosovo. The air strikes lasted from March 24, 1999 to June 10, 1999. They were successful in ousting Serbian/Yugoslav President Slobodan Milošević, often referred to as the “Butcher of the Balkans” as the perpetrator of genocide and of other crimes against humanity. Milošević died before serving a sentence for his crimes. 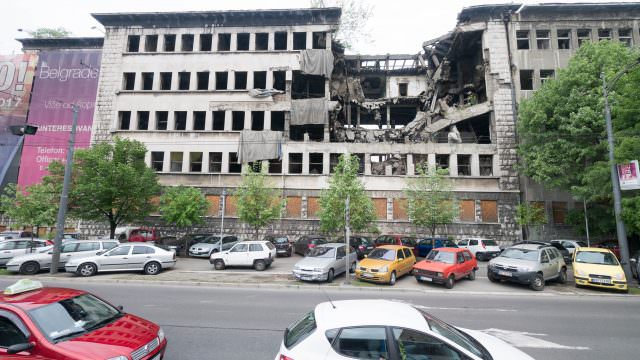 One of the buildings hit during the 1999 NATO bombing of Belgrade. © 2016 Ralph Grizzle

“It has been 15 years,” Jevtovic said, referring to the end of the wars in this region. “I believe we need 15 more years to be where this country deserves to be.” Like most people who we have met on our journey through Eastern Europe, Jevtovic appeared to be proud of his country, not where it had been necessarily but rather where he sensed it was going. “We have had two Balkan wars, a civil war and between those wars, we had dictators,” he said. “It was a terrible 100 years. Now we have freedom, but we need time. This country will look great in another 10 to 15 years.”

For now, the struggle to transition toward looking great is apparent. Gray skies certainly set a somewhat somber mood, which explains why on our tour Belgrade appeared perhaps more desperate than it actually is. The greater part of its citizens do struggle to make ends meet. Jevtovic told us that the average salary in Serbia is 400 euros per month before taxes and that taxes could be as much as 60 percent of income. What do Serbians get for paying such high taxes? Free medical care? Yes, Jevtovic said, then added as a joke, “except it’s not free, it’s not medical and they don’t care.” Many people choose private medical care he told us, rather than wait for months for treatment. 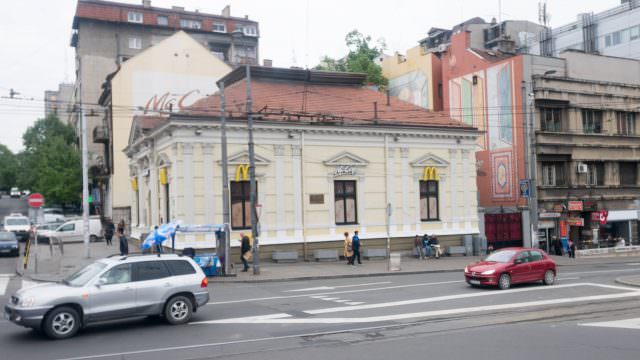 Golden Arches: the first McDonald’s to open in a communist country. © 2016 Ralph Grizzle

As we continued to make our way around the city, Jevtovic pointed out the first McDonald’s to open in Belgrade — the first to open in a communist country, in fact. The year was 1988, and Jevtovic said that he stood in line for 45 minutes to get a burger and fries.

We stopped to get out of the bus at Saint Sava Church, one of the world’s largest orthodox cathedrals. How the cathedral came to be is quite a story. Around the middle of the 1500s, the Serbs were pushing back the Ottomans, capturing several towns while crusading with war flags carrying icons of Saint Sava.

The victories were short-lived, however. The Ottomans pushed back. To assert the might of the Ottoman Empire, Grand Vizier Sinan Pasha ordered that the sarcophagus and relics of Saint Sava, located in the Mileševa monastery, be brought by military convoy to Belgrade. The relics were publicly incinerated on a pyre on the Vračar plateau. Reportedly, the flames were seen over the Danube.

Three hundred years later, the Society for the Construction of the Church of Saint Sava on Vračar was founded. Its goal was to build a temple on the place of the burning. It took some time to get going, and it is taking some time to finish. Construction began in 1935 and is on-going. “We have had many breaks in between,” Jevtovic said, “wars, dictators and more wars.” 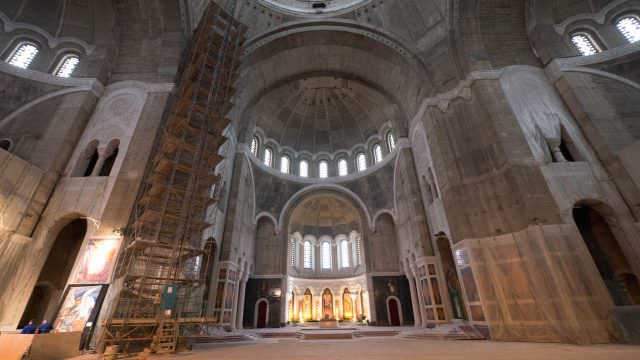 Unfinished after 80-plus years, the Church of Saint Sava. © 2016 Ralph Grizzle

After touring the inside of the cathedral, we stepped back on the bus to make our way to our next stop, the Fortress Kalemegdan, also known as Belgrade Fortress. For centuries Belgrade’s population lived within the walls of the fortress, which, like most fortresses, has been destroyed and rebuilt over time.The Belgrade Fortress sits at the top of a high ridge overlooking the confluence of the Sava and Danube rivers. 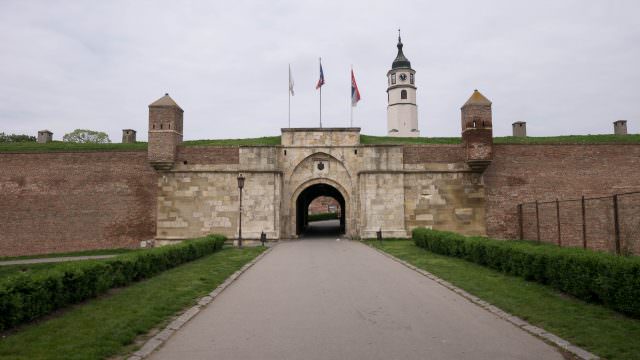 The fortress city was first mentioned in the 3rd century BC by Celts who had defeated Thracian and Dacian tribes in the region. The Romans were the next conquerors, and the city-fortress then known as Singidunum, became a military frontier between the Roman Empire and Central Europe. The Roman camp was destroyed on repeated occasions by the Goths and Huns. Some say that Attila the Hun’s grave is in the region of the fortress.

In 476, Belgrade became the borderline that separated the Western Roman Empire and the Eastern Roman Empire. Over successive centuries the fortress was attacked, destroyed, rebuilt and occupied, even through the world wars of the last century.

While we were at the fortress, one of our fellow guests took the opportunity to become a billionaire. Our guide Jevtovic was telling us about Serbia’s hyperinflation in 1993, which, he said, resulted in the government issuing notes in denominations as high as 500 billion dinar. Today, you can buy a packet of those notes for only 5 euros. Thus, the 500 billion dinar is worth only a bit more than the paper it is printed on. 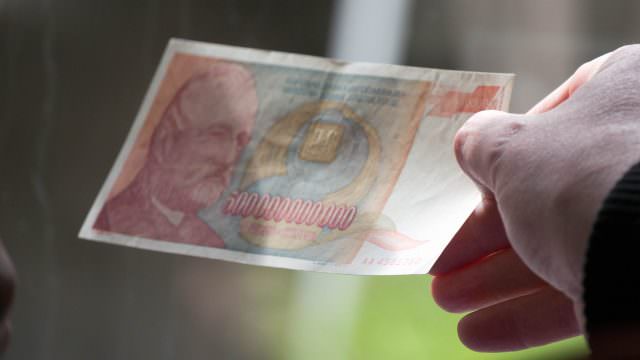 For five euros, one of our fellow guests became a multi-billionaire. © 2016 Ralph Grizzle

On the morning that we toured Belgrade, the city still had the feeling of one that was transitioning travelers like us from the East to the West. I could imagine a journey from Anatolia (where I had spent time this past fall) through European Turkey to Bulgaria and into Serbia. If Asia were on one end of a continuum (say at position number 1) and Western Europe were on the other (at position number 10), Serbia would be at position number 3. We were no longer in Asia, but we were not yet in Western Europe either.

Tomorrow, another twist of the cultural kaleidoscope. The backstory? Only a little more than a quarter a century ago, Serbia and its neighbor were involved in armed conflict. Most sources put the number of deaths from the war, which took place between 1991 and 1995, at 20,000, plus scores who were left disabled. We would visit that neighboring country next. Upriver, Croatia awaited us.