CroisiEurope’s Newest Ship Was Designed Exclusively For the Elbe River 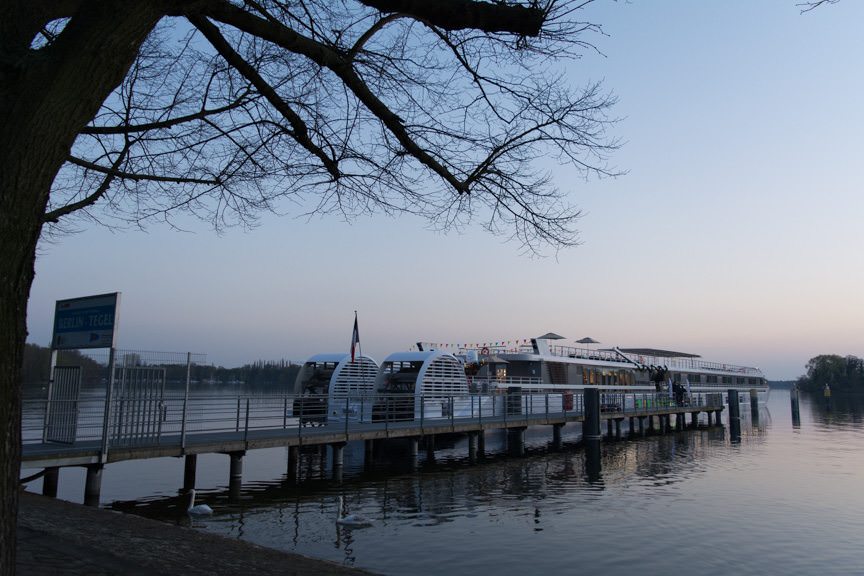 The Elbe Princesse docked at the Greenwichpromenade Docks on the evening of April 14, 2016. Photo © 2016 Aaron Saunders

Today, CroisiEurope inaugurated its newest ship into a fleet of 46, the 311-foot long, 80-guest Elbe Princesse in Berlin, Germany.

While heavy rain pounded down on the ship, which was docked at the Greenwichpromenade area just north of Berlin’s Tegel Airport, it cleared long enough for Anke Rehlinger, minister of economic affairs for Saarland; and Jean-Claude Tribolet, the representative for Philippe Etienne, the French ambassador to Germany, to jointly smash a bottle of champagne against the ship’s hull to officially welcome Elbe Princesse into service. 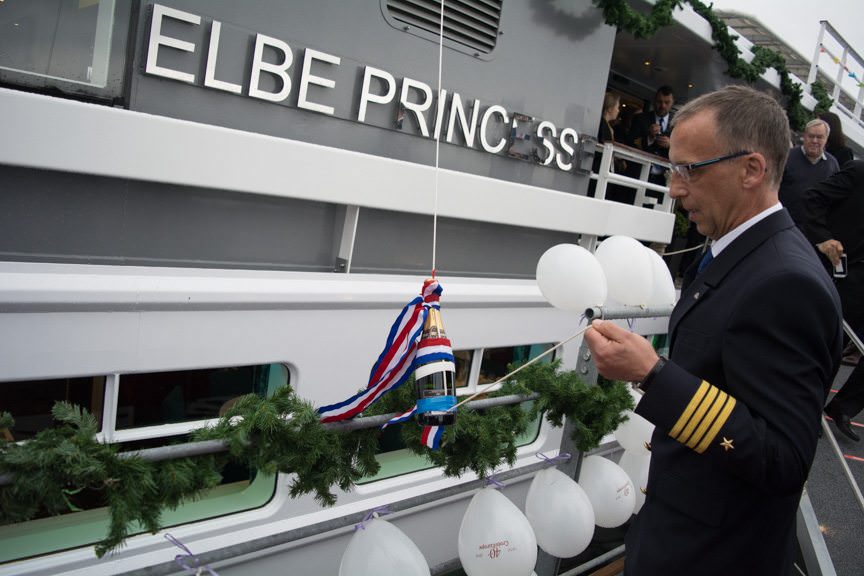 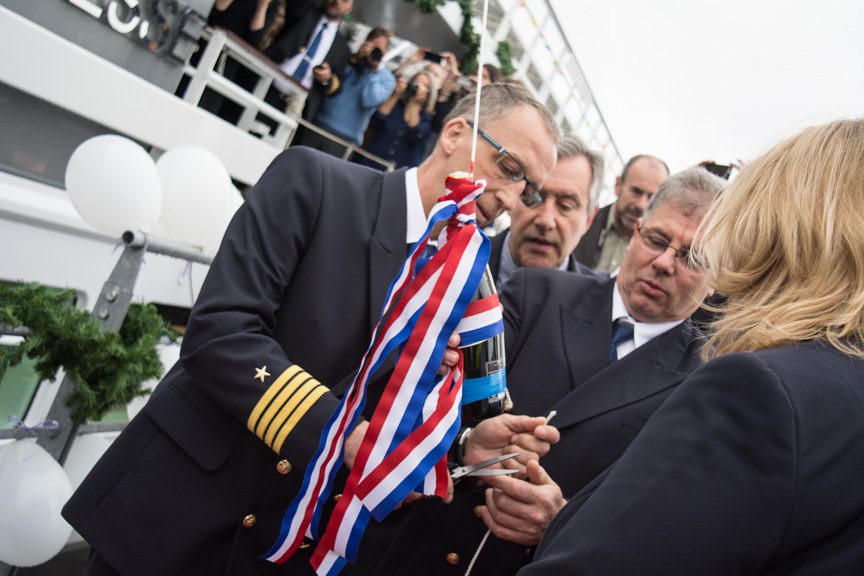 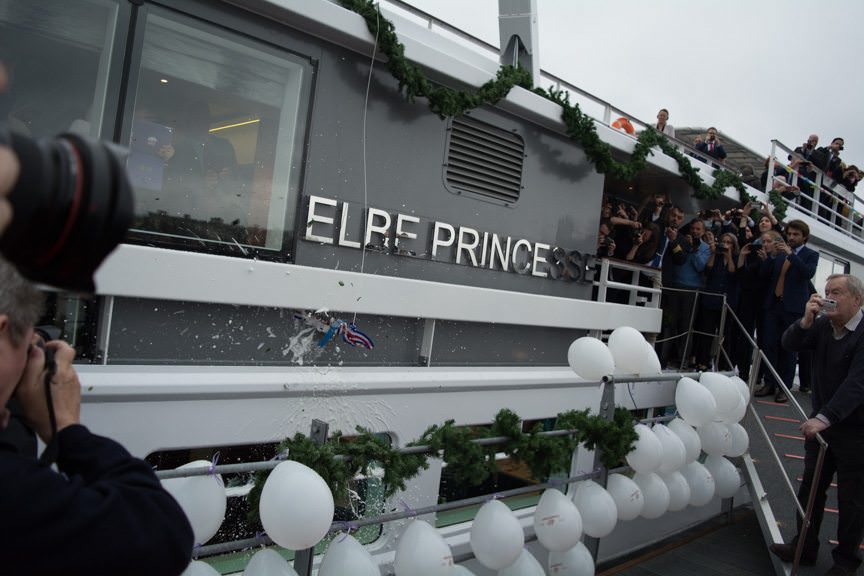 Designed specifically to sail the notoriously shallow Elbe, Elbe Princesse is one of the only ships that can actually cruise all the way from Berlin to Prague without the need to embark and disembark guests and transport them the rest of the way via motorcoach – something many other river cruise lines sailing similar Elbe itineraries have to do.

Elbe Princesse can sail all the way into the heart of Prague because she has less than three feet of her keel underneath the water. To save precious space, CroisiEurope patterned her after Loire Princesse, which is propelled by paddlewheels. Unlike Loire Princesse, however, these wheels are mounted to the stern of the Elbe Princesse. 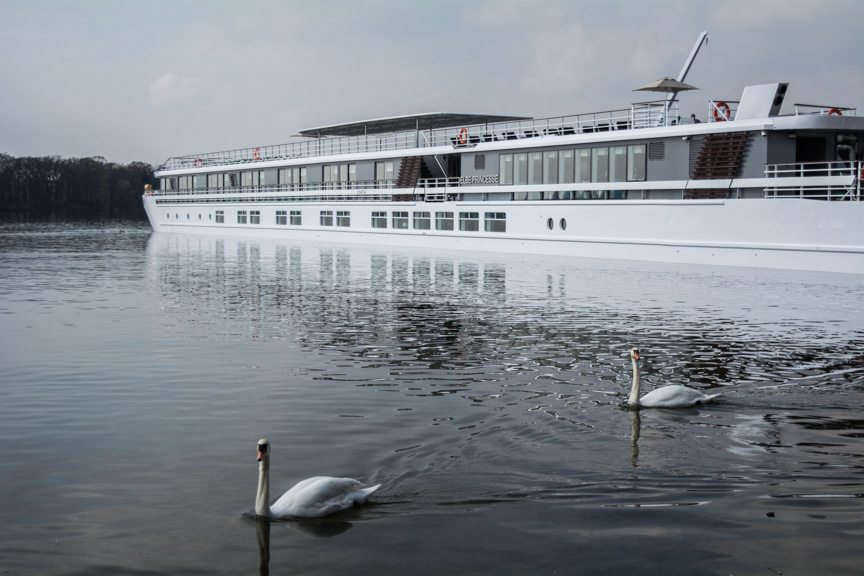 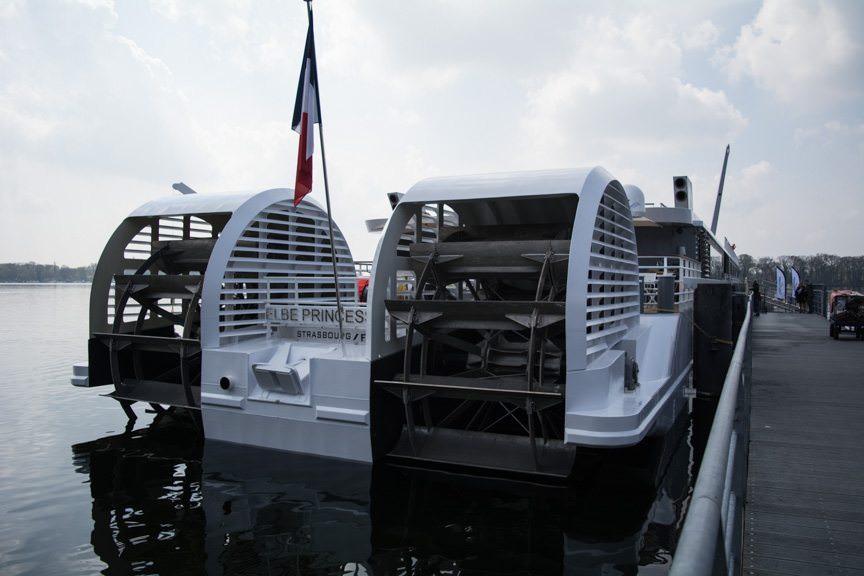 … accented by paddlewheel propulsion mounted at the stern of the ship. Photo © 2016 Aaron Saunders 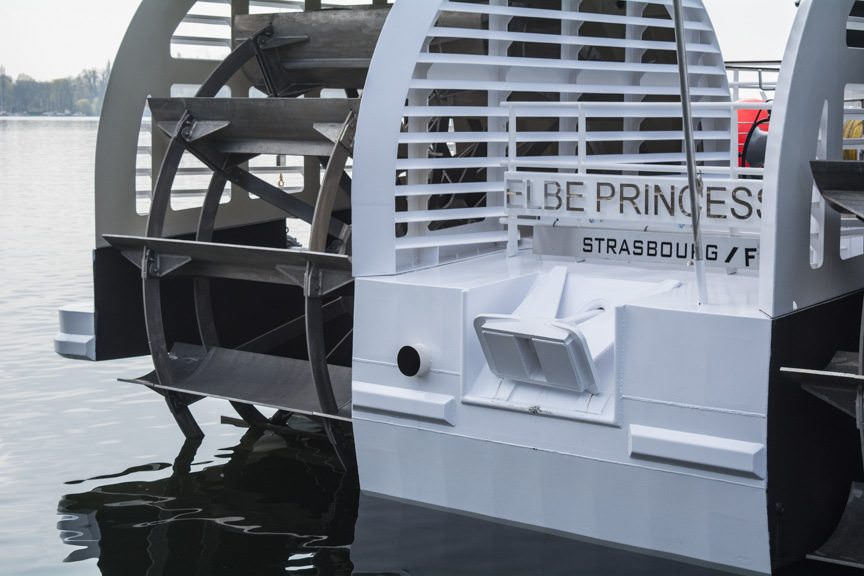 Inside, Elbe Princesse features 40 staterooms, most of which are primarily the same in terms of space and layout. Staterooms are small, but well-designed, with beds positioned to face the windows and attractive turquoise wall accents complemented by drawings or photographs of Berlin. 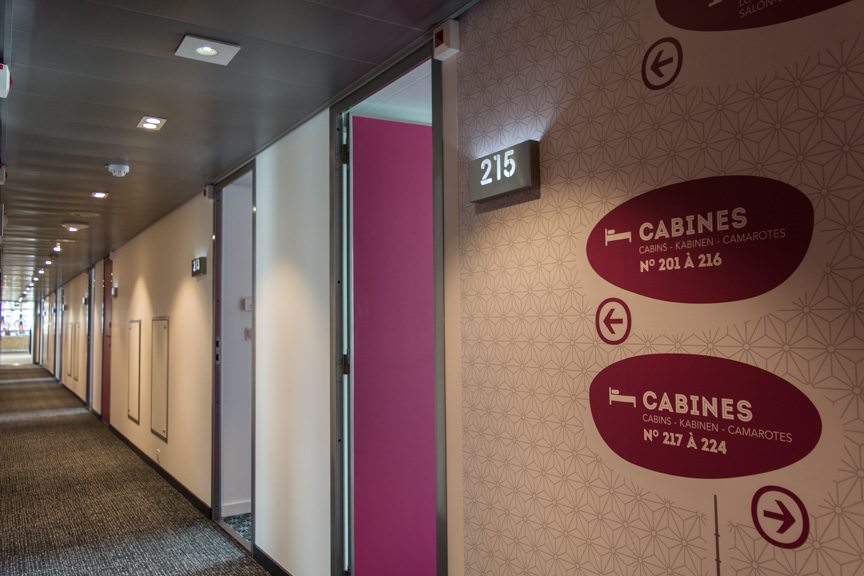 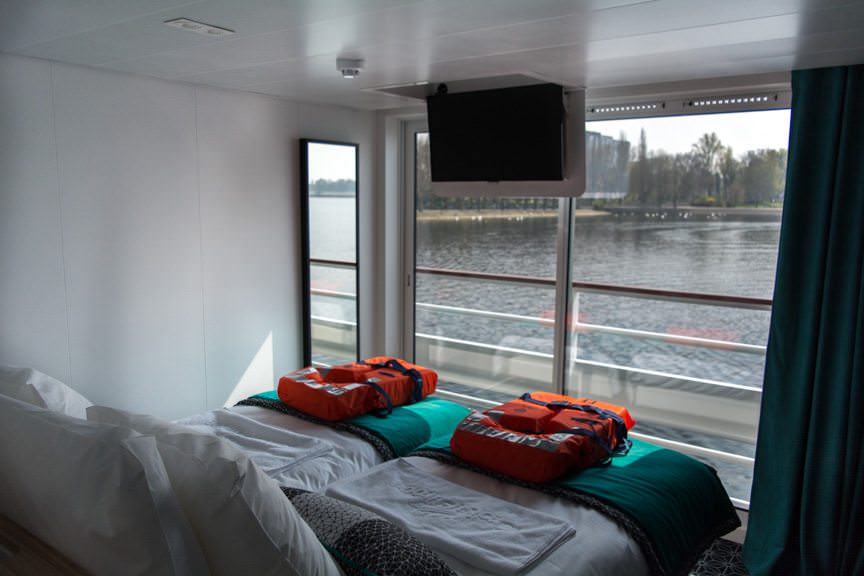 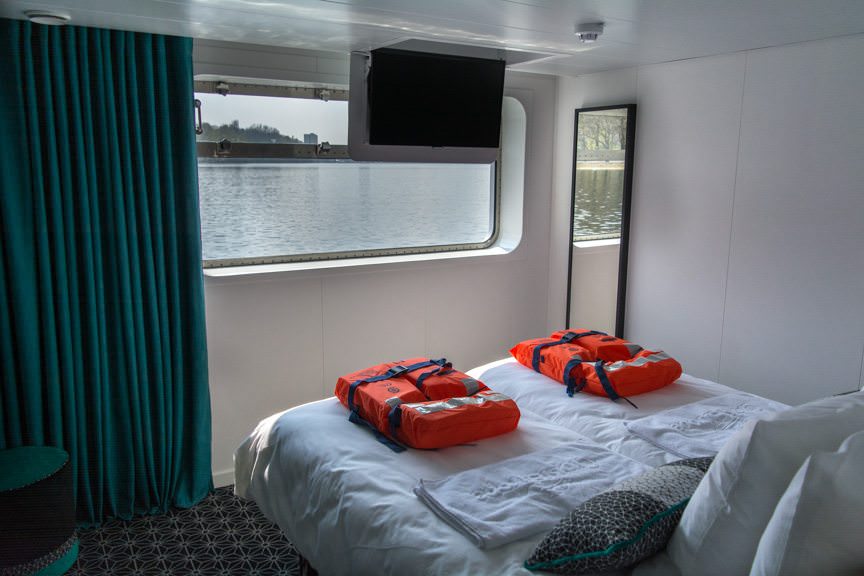 Lighting options are good and plentiful, and bathrooms are crisp and smartly designed, featuring some of the largest showers we’ve seen aboard a river cruise ship. You won’t be hitting the wall or battling with the showerhead in these.

Televisions are cleverly tucked into the ceiling, and lifejackets conveniently hidden in the headboard of the bed in order to leave room for luggage underneath the beds. Ships on the Elbe are severely restricted in their overall dimensions, which is why the staterooms aboard Elbe Princesse aren’t overly spacious. Still, they’re well-designed spaces that are comfortable for two guests travelling together for a week, and storage space is generous. 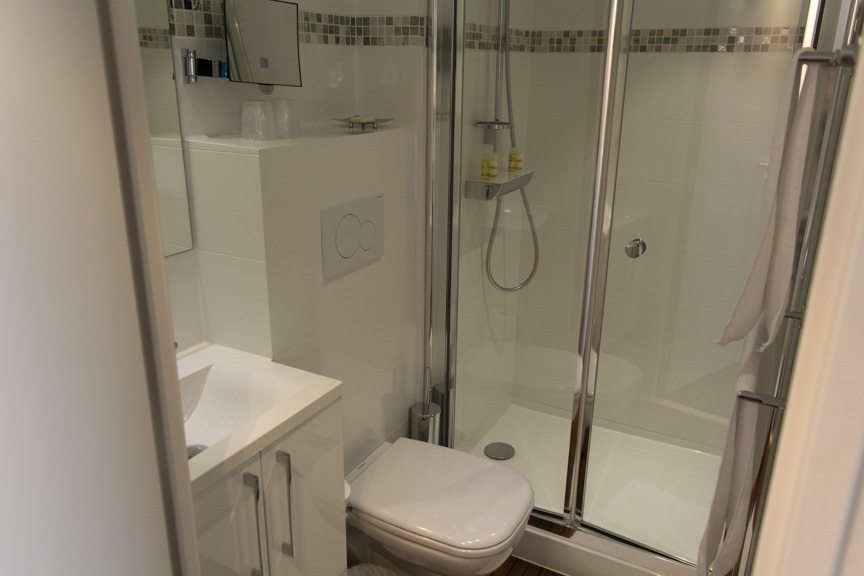 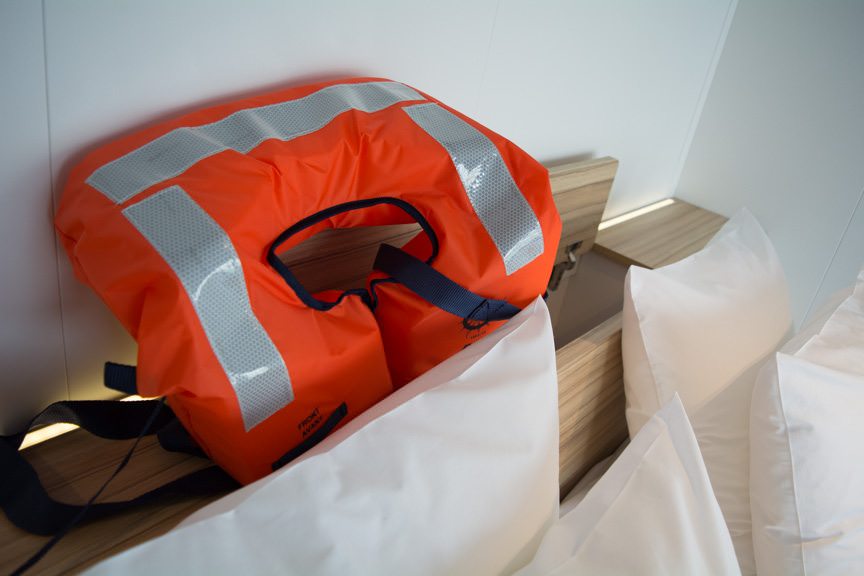 Lifejackets tuck cleverly into this cabinet mounted behind the headboard of the bed. Photo © 2016 Aaron Saunders

Elsewhere, the Elbe Princesse exudes a warmth and decidedly French charm that is infectious. This isn’t a Viking Longship but, then again, it’s not supposed to be. Still, you’ll find bright, vibrant colors in the ship’s Main Lounge, Dining Room and guest corridors, with magenta colored doors and couches accented by turquoise furniture and asphalt-grey carpeting. Design could best be described as a bend of French modern chic coupled with a healthy dose of Scandinavian influence. 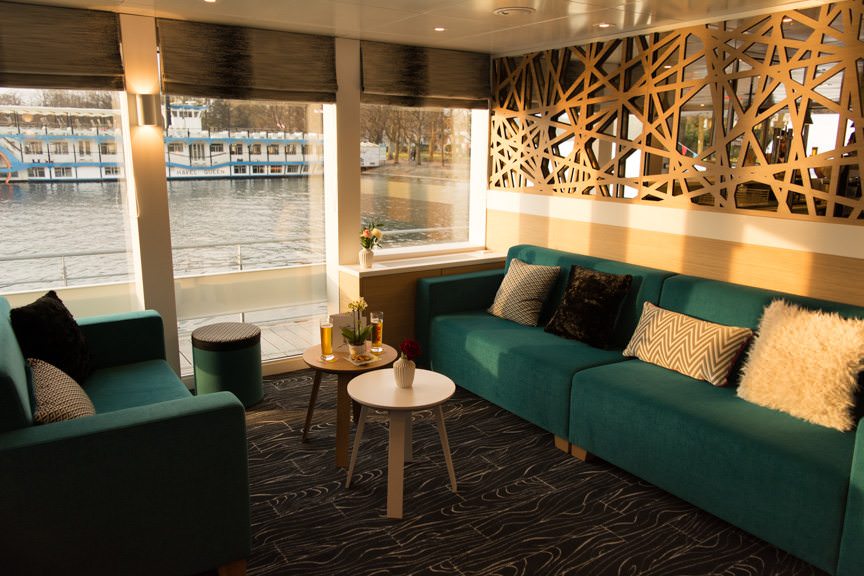 Scandinavian touches and French chic decor are present throughout, like in the inviting Lounge, shown here. Photo © 2016 Aaron Saunders 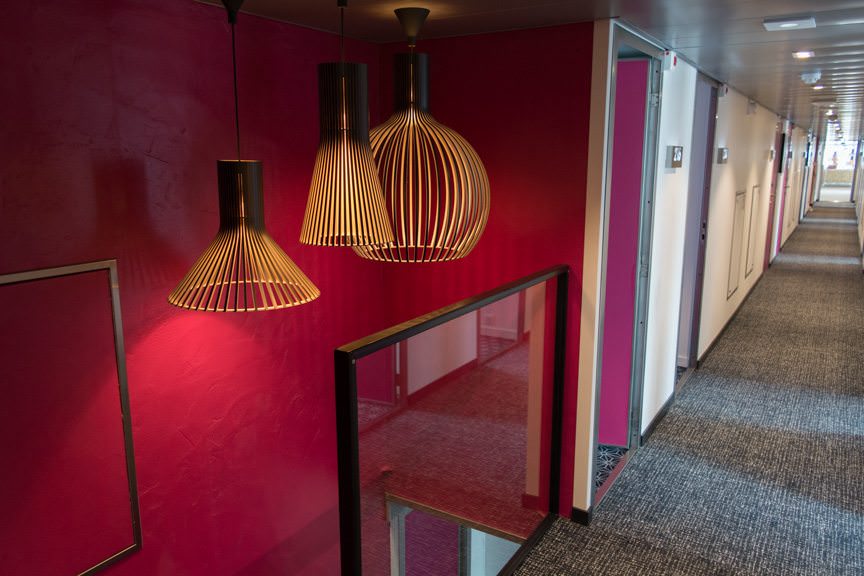 As lovely as the ship is, it’s the crew of the Elbe Princesse that are really making this short preview cruise fantastic. Fluent in several languages, they converse as easily in English as they do in French or German, switching effortlessly from one to the other. Service is friendly and welcoming throughout all areas of the ship, and you can scarcely pass someone without a hearty “Bonjour!” or “Good Morning” as you pass in the corridor or enter the Restaurant. 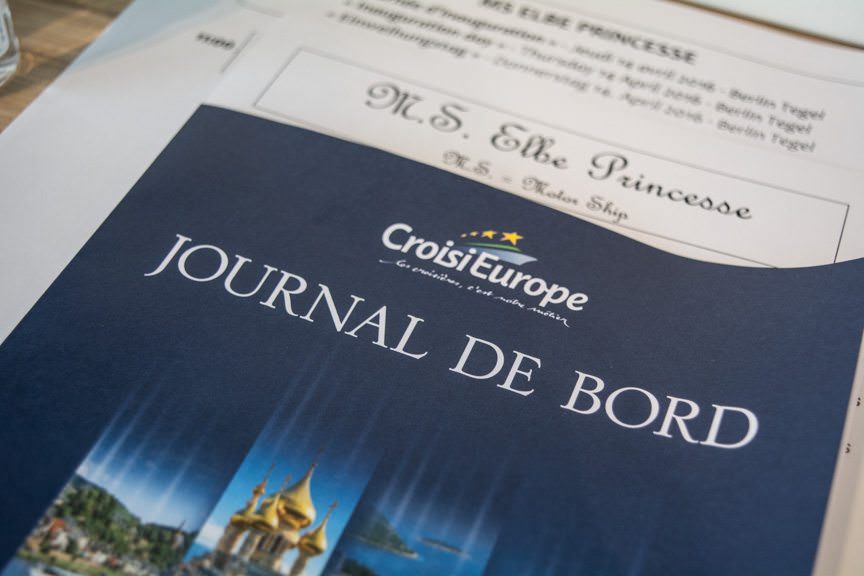 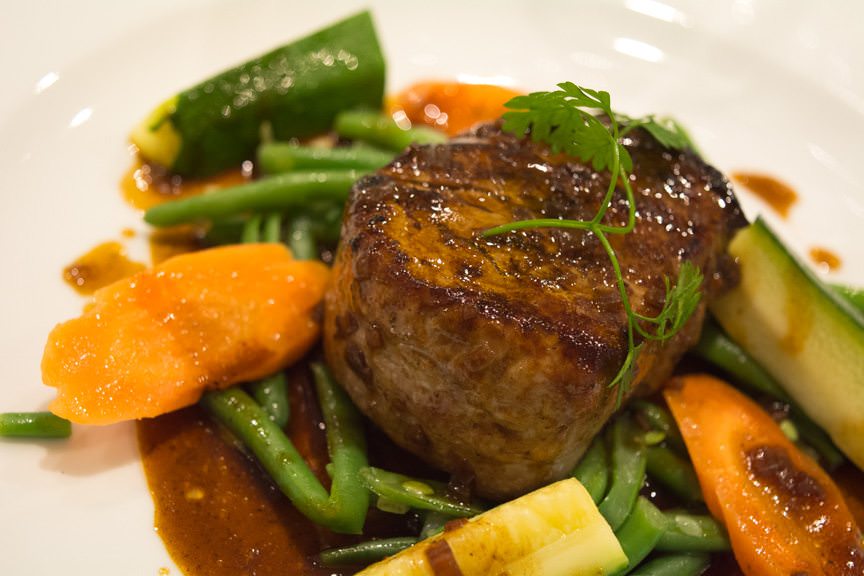 Cuisine onboard has been excellent. Photo © 2016 Aaron Saunders

There’s still much more to come from here onboard the Elbe Princesse but, for now, it seems that CroisiEurope’s latest ship is a celebration of all things French and German, not to mention the line’s 40-year legacy as a proudly family-run company after being founded by the late Gerard Schmitter in 1976.

River cruising may have reached its peak popularity in the last few years, but Elbe Princesse is the latest vessel for a company that has been constantly tweaking its product for four decades. Popular in Europe (Elbe Princesse is fully booked for 2016), it’s ships like this that are poised to bring the company greater recognition to its new audience in North America. 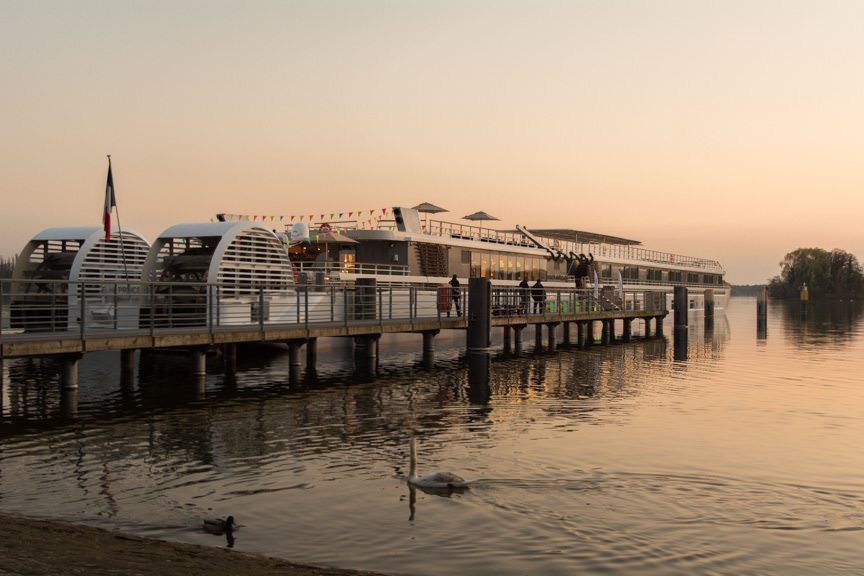 Our Voyage Report from onboard CroisiEurope’s Elbe Princesse continues tomorrow with a look at the ship and a tour of Potsdam. Be sure to follow along with our adventures on Twitter @deckchairblog.