Viking’s Myanmar Explorer Lives Up To Its Name 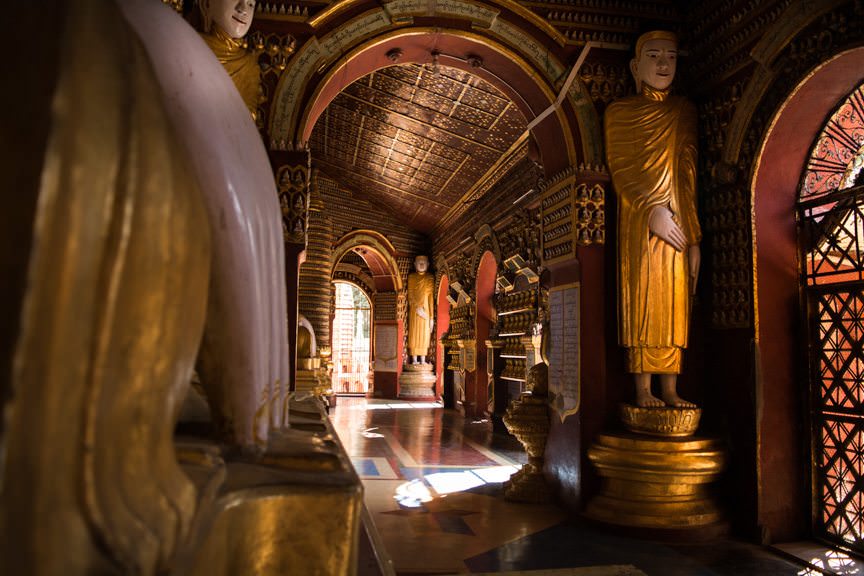 Unbelievably, we’ve come to the end. Today is our last full day aboard Viking River Cruises’ Viking Mandalay, as our spectacular Myanmar Explorer river cruise tour itinerary that began two weeks ago in Bangkok, Thailand comes to a close.

But that doesn’t mean our adventures are finished. Not by a long shot! 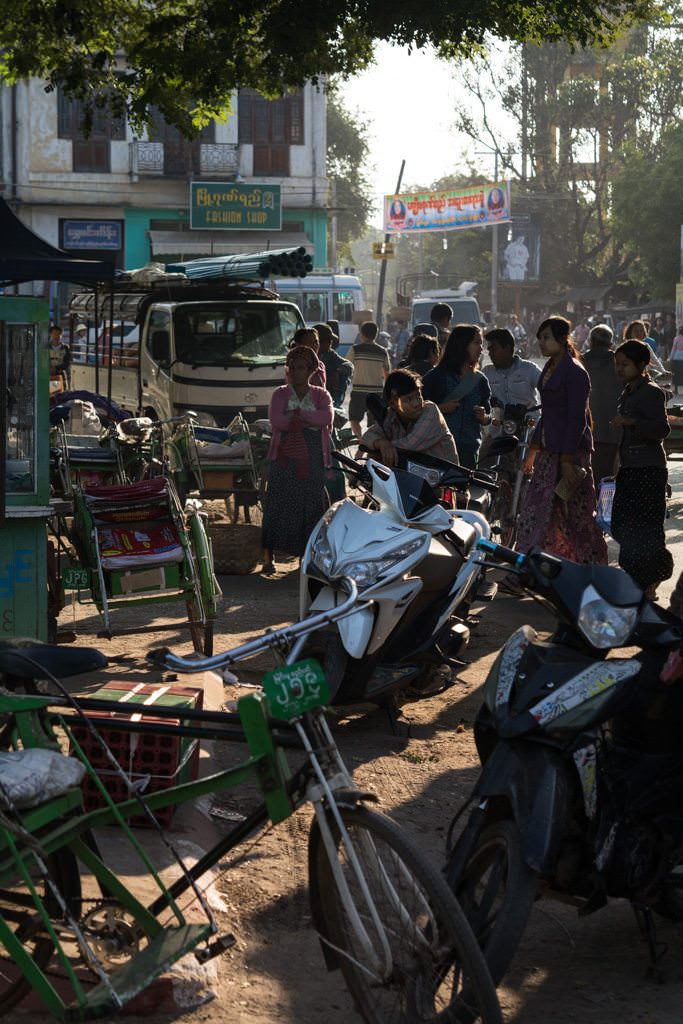 In Myint Mu, we had 45 minutes to tour the local market, where we once again disappeared into a haze of smoke, flies, scents, people, and goods of all kinds. There was everything from boxed Colgate toothpaste to sliced fish heads on offer here. Traditionally, when refrigeration was scarce, locals would go to the market twice per day: once in the morning to pick up goods for the first part of the day; and again in the evening to pick up food for dinner. 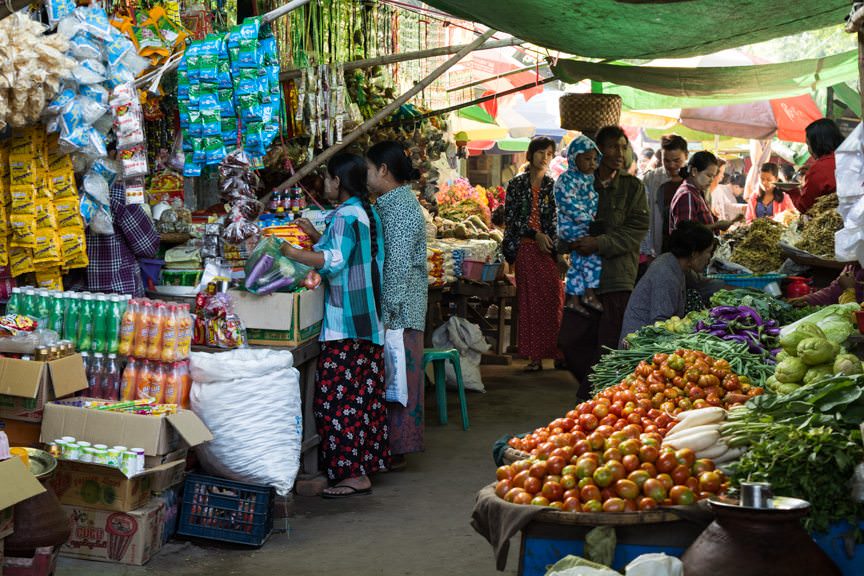 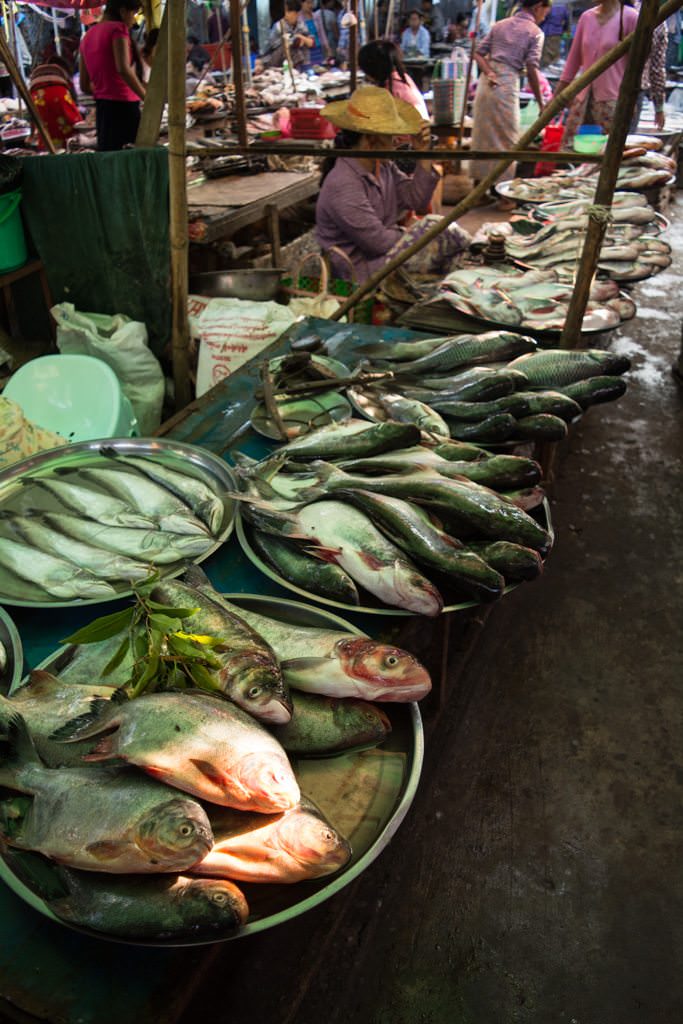 Of course, this includes the catch of the day. Photo © 2015 Aaron Saunders

The beautiful thing about Myint Mu was how we completely blended in with the locals. Physically, we couldn’t have stood out more. But this wasn’t about physical appearance; it’s about how the locals treated us. We were treated with such kindness – like we lived in the village – that the thought I could be robbed or harmed in any way never crossed my mind. Markets in other countries, however, can be cesspools of crime and scams; just take a walk through a market in Morocco or Turkey to see what I mean.

Here, you get lots of curiously shy smiles. A few locals might practice their English with you; a favorite call is to say, ‘Hey! Hey!’, or perhaps the more-formal, “Hello.” 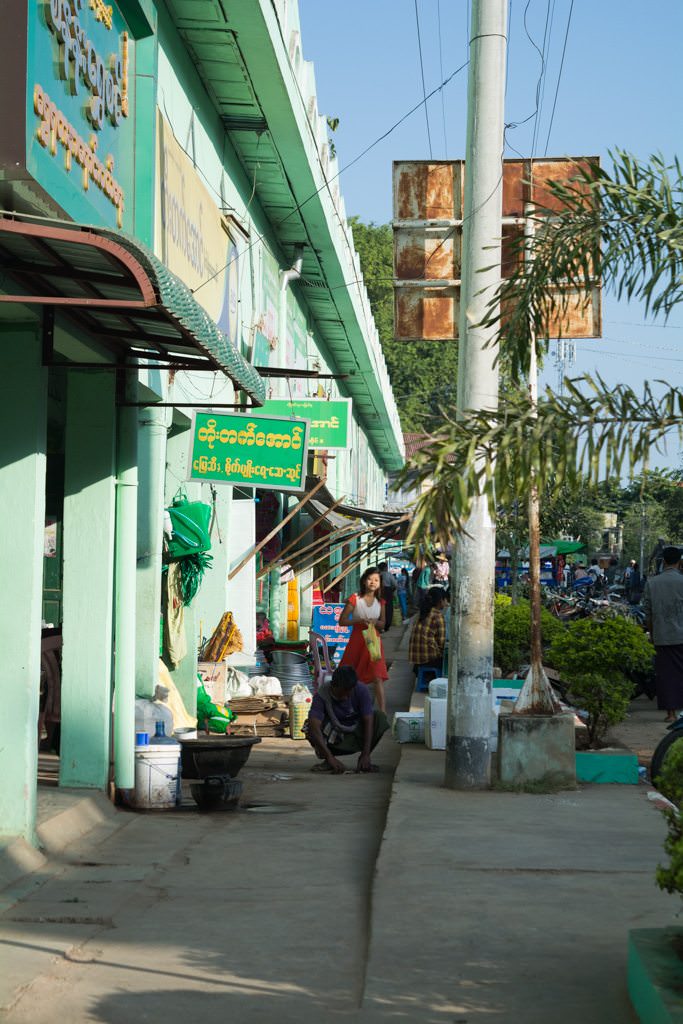 The pretty town of Myint Mu looks almost like any other developing town, but it has a real sense of place to it. Photo © 2015 Aaron Saunders

It’s such a beautiful thing to be able to walk around the markets as a local, without any beggars or people pressuring you to buy things. All you get is genuine kindness from the local Burmese, and that encourages you to smile on a rather non-stop basis.

I tried my luck at buying shaving cream from a few local vendors by making the international “shavey-shavey” motion, dragging my thumb and finger down my face in a shaving-like motion. I got a lot of razors, but no one had any shaving cream. Despite my failure to acquire any, I was still impressed at my attempts to communicate beyond “mingalaba” (Hello!). 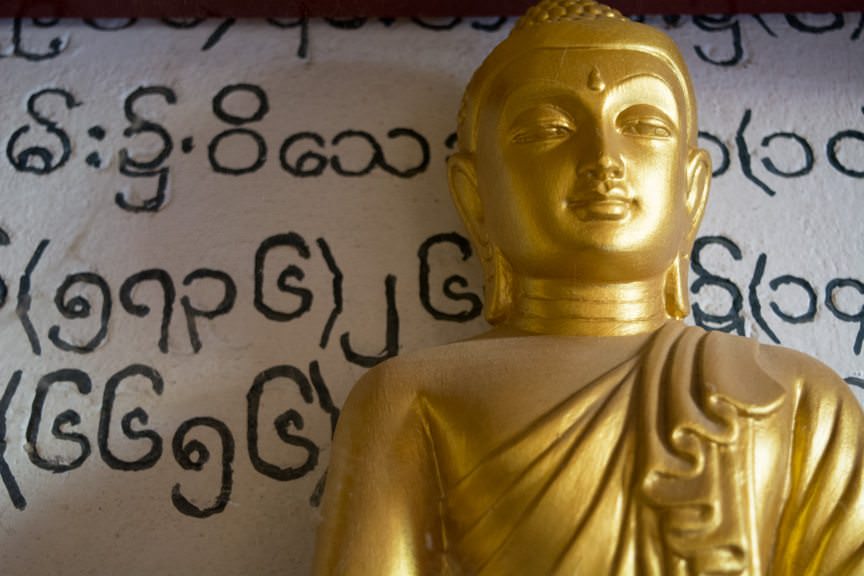 Afterwards, we proceeded to the town of Monywa, Myanmar, which could be best described as the Buddha epicenter of Myanmar. In addition to having the second-tallest Buddha statue in the world, it also boasts a massive 95-metre long reclining Buddha, and another, even taller Buddha is under construction.

The big draw here is Thanboddhay Pagoda, which was originally built in the 1300’s but heavily reconstructed in 1939. It has some 500,000 images of Buddha – and counting. Visitors can purchase a small Buddha and place it on one of the (few) empty pedestals to add to the growing count of Buddhas in Monywa. 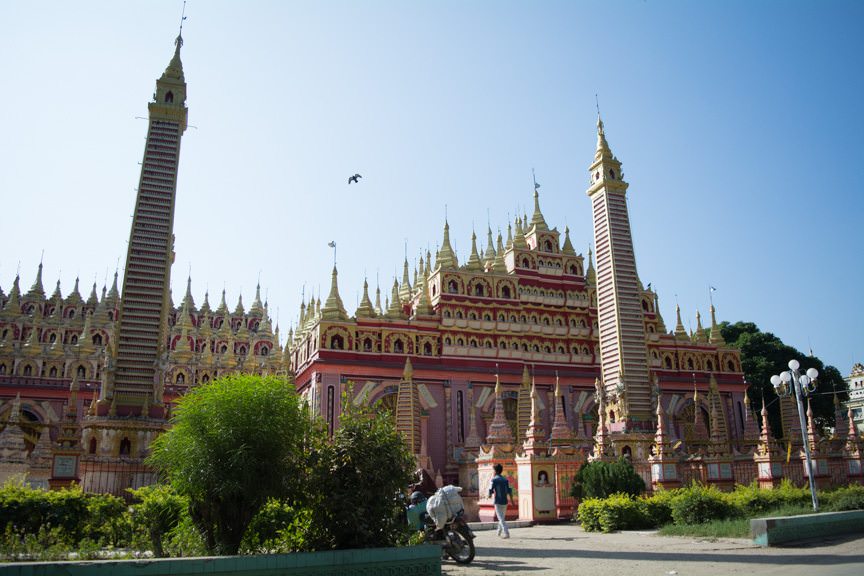 Thanboddhaya Pagoda is one of the most amazing sights I’ve personally seen. Photo © 2015 Aaron Saunders 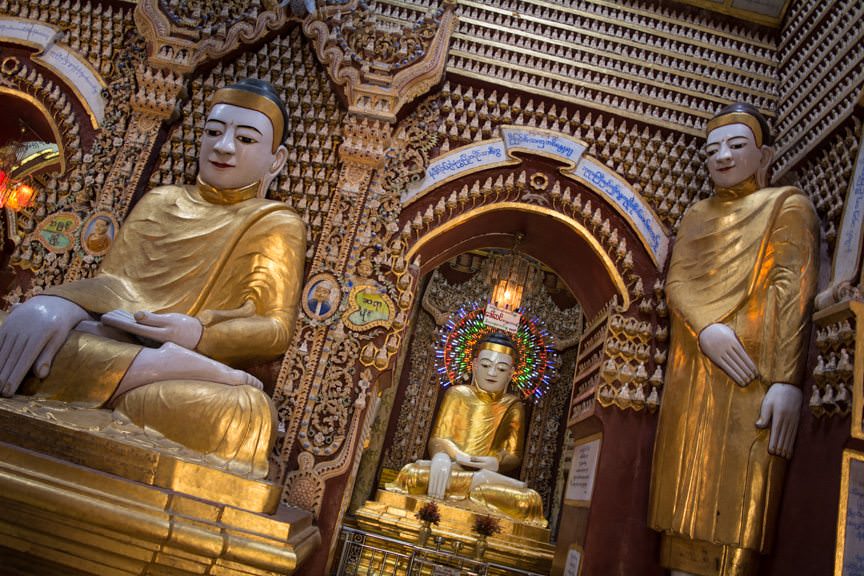 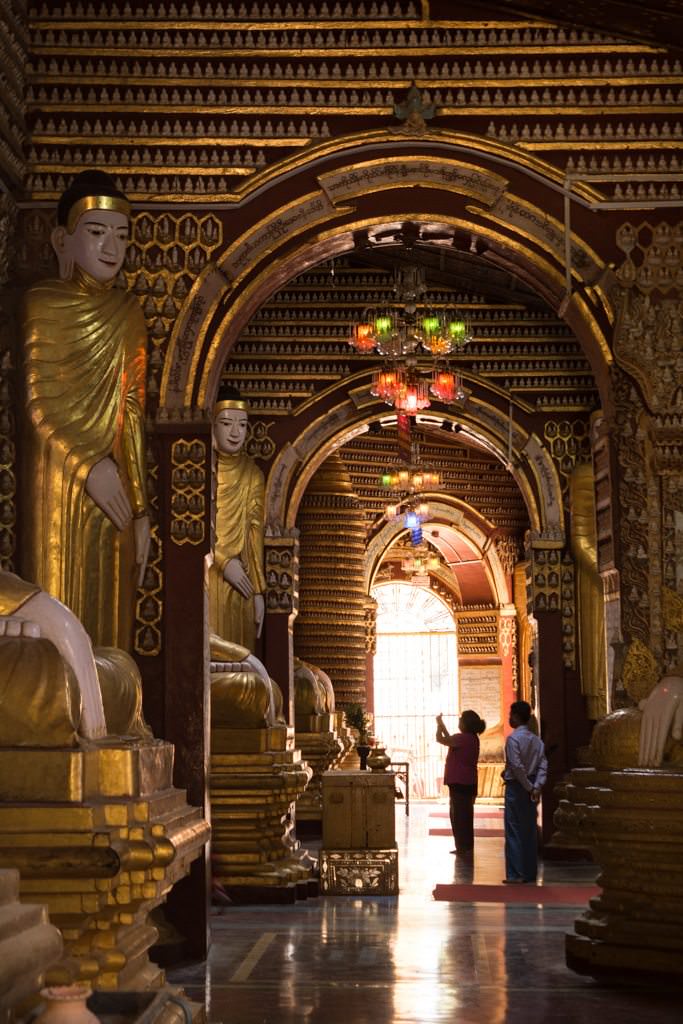 You can even add your own mark on the Paya by purchasing your very own Buddha to place in the temple. Photo © 2015 Aaron Saunders

Out of all the places we’ve visited on this trip, today was a real surprise. I think there’s a certain amount of Buddha-temple exhaustion that creeps in during the last few days of this trip, much in the same way visitors to Europe can get bombarded with cathedrals. It doesn’t help that most are named St. Paul’s or St. Peter’s, either. The Church of St. Bob’s, I’d remember.

So don’t miss out on Myint Mu or Monywa; they’re two of the most fascinating, original places you’ll visit in this beautiful country. 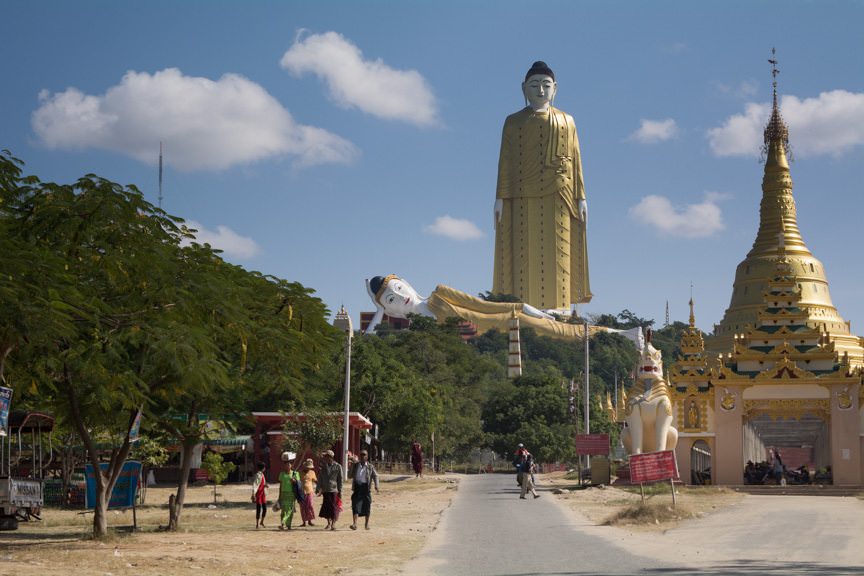 Tomorrow, we have what could be the most leisurely disembarkation morning ever. Breakfast begins, as it always has, at 7:00 a.m. Onboard accounts can be settled starting at 8:00 a.m., and luggage doesn’t have to be out until 9:00 a.m. We can then enjoy the Sun Deck (where the bar will be open) or lounge in our staterooms until 10:45 a.m., when we will disembark Viking Mandalay one final time.

We’ll then drive to Yangon International Airport for a quick two-hour hop on Bangkok Airways over to Bangkok, Thailand, where all of us will spend one more night at the Shangri-La Bangkok before going our separate ways.

I’ve taken many cruises, both river and ocean, with Viking. I have high expectations of the line in Europe, where the bread-and-butter of the river cruise operations take place on the company-owned (and superbly crafted) Viking Longships. 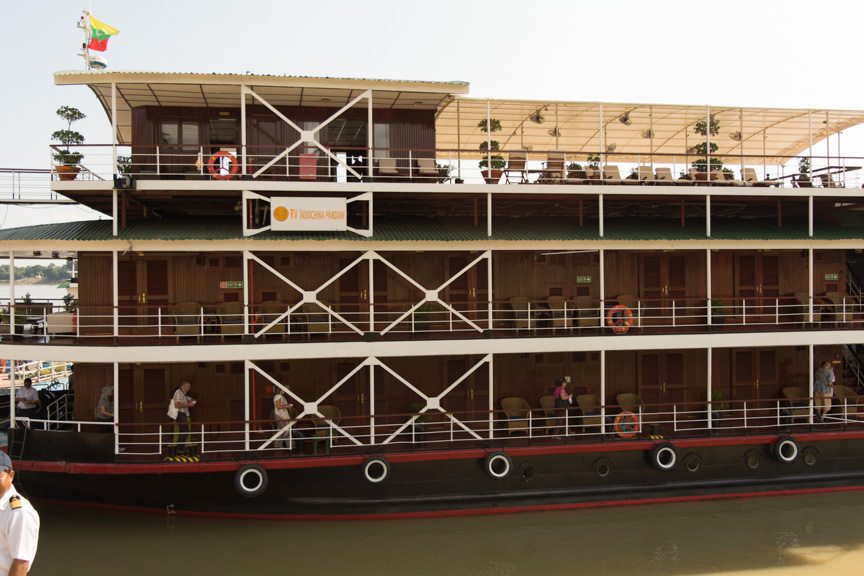 Here on the Mekong, though, I’d ratcheted down those expectations. Surely in this exotic, hard-to-manage region of the world, on a ship not directly owned by Viking, the line’s consistently-high standards would be hard to uphold.

The truth of the matter is that this voyage has far exceeded my expectations. Service is every bit as good as the line’s European operations, and I’d say it even surpasses that of the voyage I took with Viking in October on Portugal’s Douro River. On the Douro, language issues were sometimes present with some of the staff (Viking’s Douro operations are operated by another company, Douro Azul). That’s not the case at all here; the command of the English language that the entire crew has is impressive. 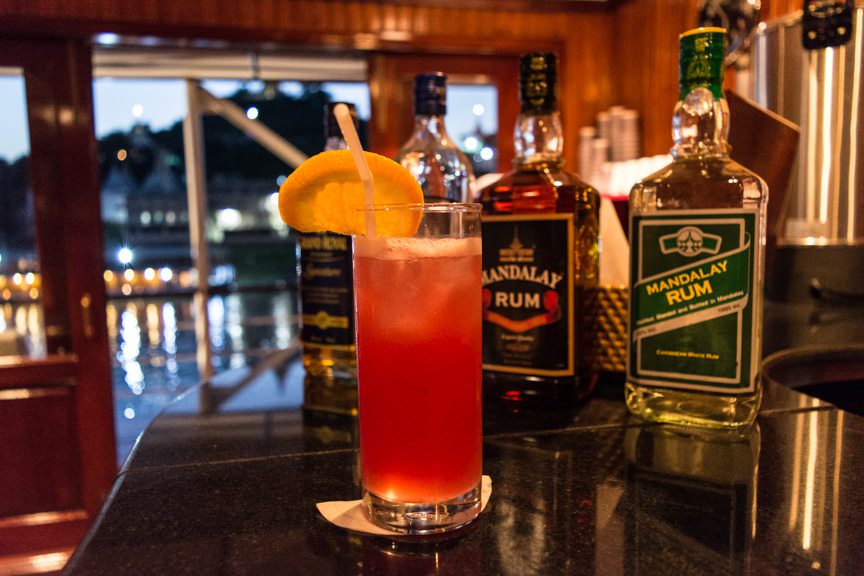 If you haven’t sailed with Viking before, I’ll say what I always say: you should. It’s worth it to find out what all the fuss is about, and to see just how accurate all those adverts that air before Downton Abbey really are. But if you’re an experienced cruiser or traveller looking for something more adventurous, exotic and demanding, I’d wholeheartedly recommend coming to Myanmar. In fact, I’d encourage it. Myanmar is at the precipice of great change, and I feel sooner is going to be better than later to see it in its unspoilt splendour.

Viking may be known for their cruises along the Danube, but I think what they’ve crafted here on the Irrawaddy is very special.

I know you’ll think so, too. 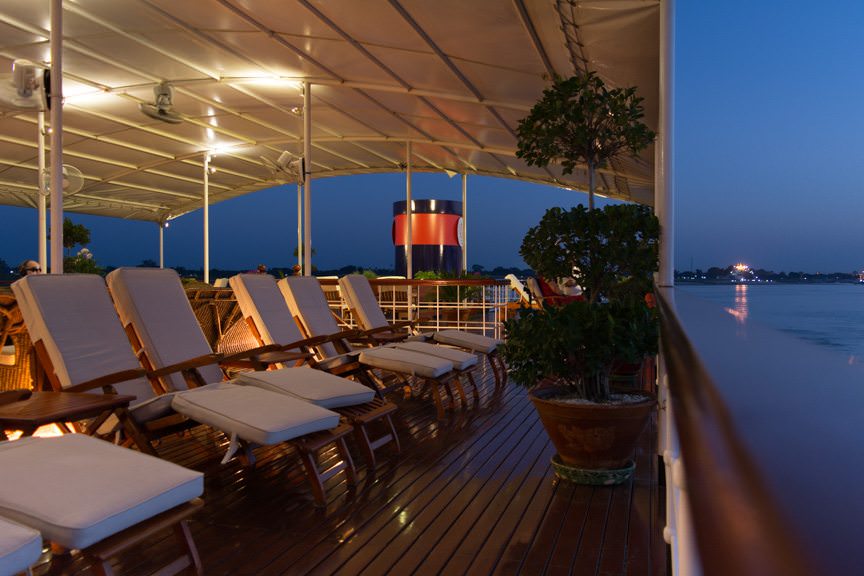 Our Live Voyage Report from Viking River Cruises’ Myanmar Explorer has sadly come to a close, but stay tuned for a full recap of our journey and a deck-by-deck photo tour of the Viking Mandalay! Be sure to follow along with our adventures on Twitter @deckchairblog.