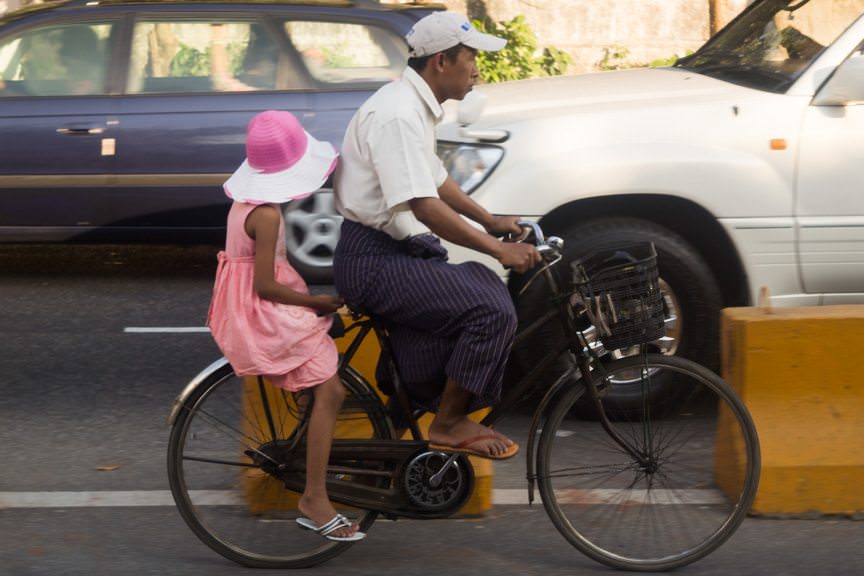 Today, I woke up bright and early in my room at the Shangri-La Bangkok. I showered, shaved, and went downstairs to enjoy a relaxing (included) breakfast in the River Café. I made the mistake of reading the International New York Times, which came off sounding more like the Doomsday Prophet considering all of the terrible world events that were printed on the page.

It also got me thinking about this journey with Viking River Cruises, as we got set to fly to Yangon, Myanmar at the start of Viking’s massive Myanmar Explorer river cruise tour itinerary. 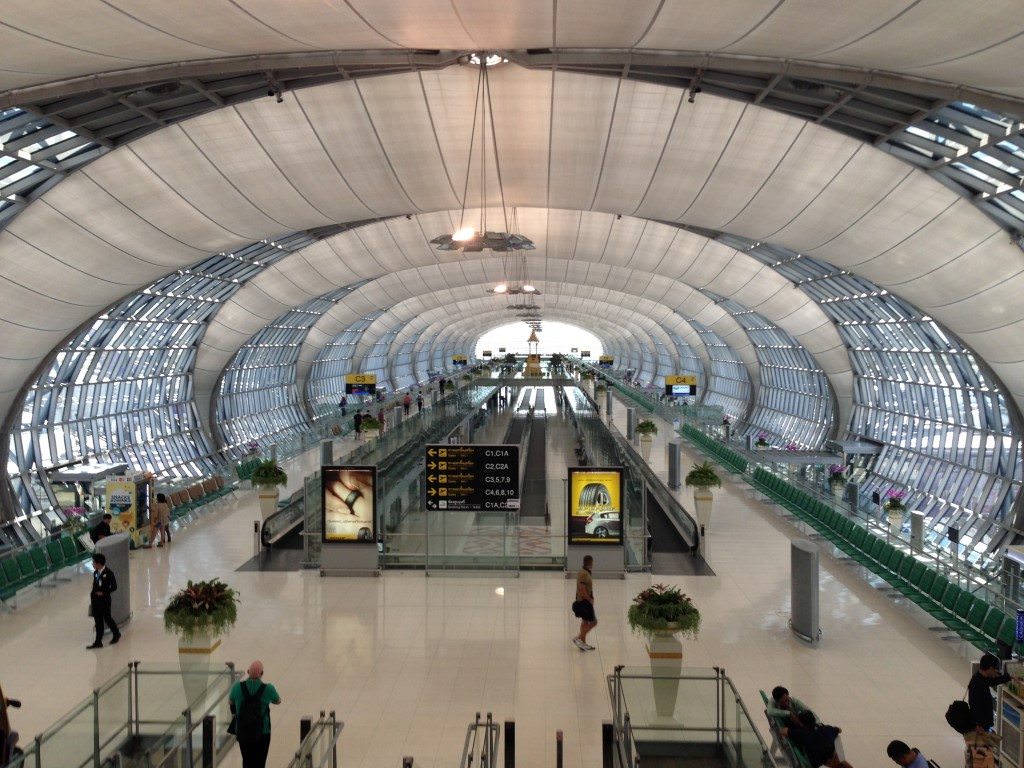 See, the issue is this: Everyone is scared of what they don’t know, or don’t understand. Anywhere you travel for the first time automatically makes you a stranger in a strange land. But the simple act of going to a place for the first time can help to dispel myths and misconceptions – and that’s what happened to me today.

After a relaxing morning, we boarded our coach at 10:30 a.m. to set out for Bangkok’s airport. Trouble is, two guests forgot to pay their bills, so we drove around the property in a loop for 15 minutes, waiting for them to check-out. Travel Tip: Even on group tours where check-in is handled for you, you still have to check yourself out – and pay your bill! 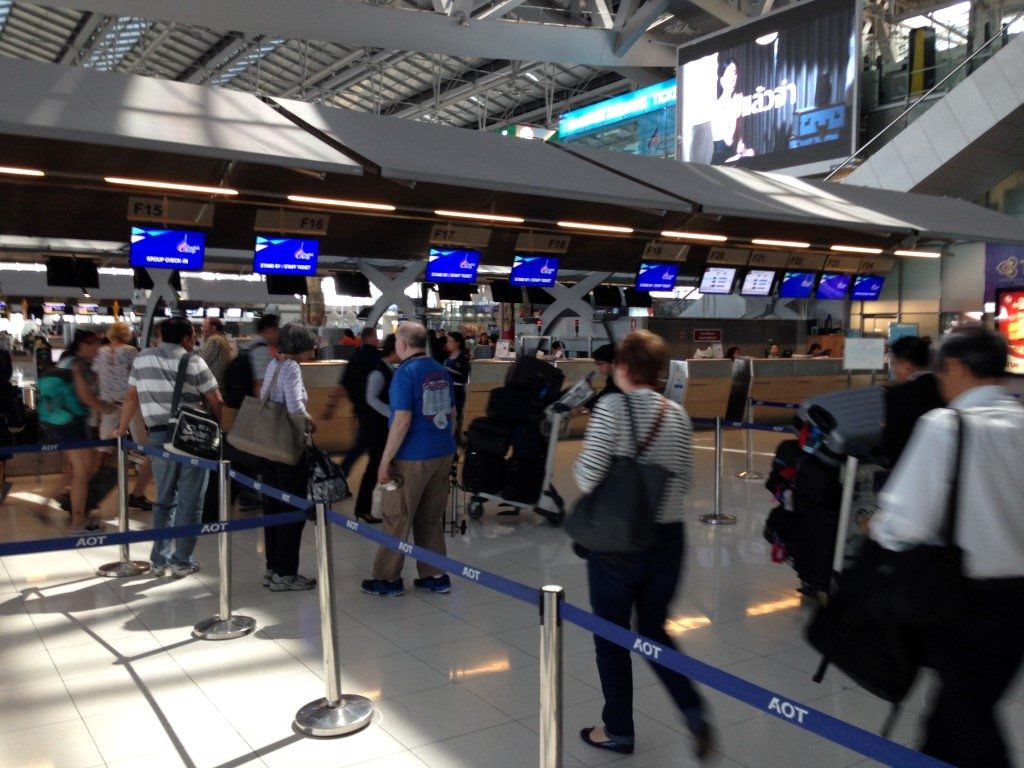 Checking in with Bangkok Airways at the airport couldn’t have been easier, and we were escorted every step of the way. Photo © 2015 Aaron Saunders

Accounts settled, we finally set out for the airport and came crashing into Bangkok’s legendary traffic. It’s so bad that an octogenarian with a walker and a poor sense of direction could have beaten us for the first half-hour; an automobile accident had tied up traffic for blocks.

If I were travelling independently, I would have been a wreck. Our Bangkok Airways flight to Yangon was scheduled to depart at 1:40 p.m., and we were still hopelessly mired in traffic at 11:30 a.m. In fact, it wasn’t until noon that we arrived at the airport.

But here’s where the benefits of travelling as a group with Viking kicked in: After we’d disembarked the coach and had identified our luggage, we were led to the Bangkok Airways Group Check-in Counter where we individually checked in. No need to schlep our luggage along with us; that was taken care of by Viking and the Bangkok Airways. 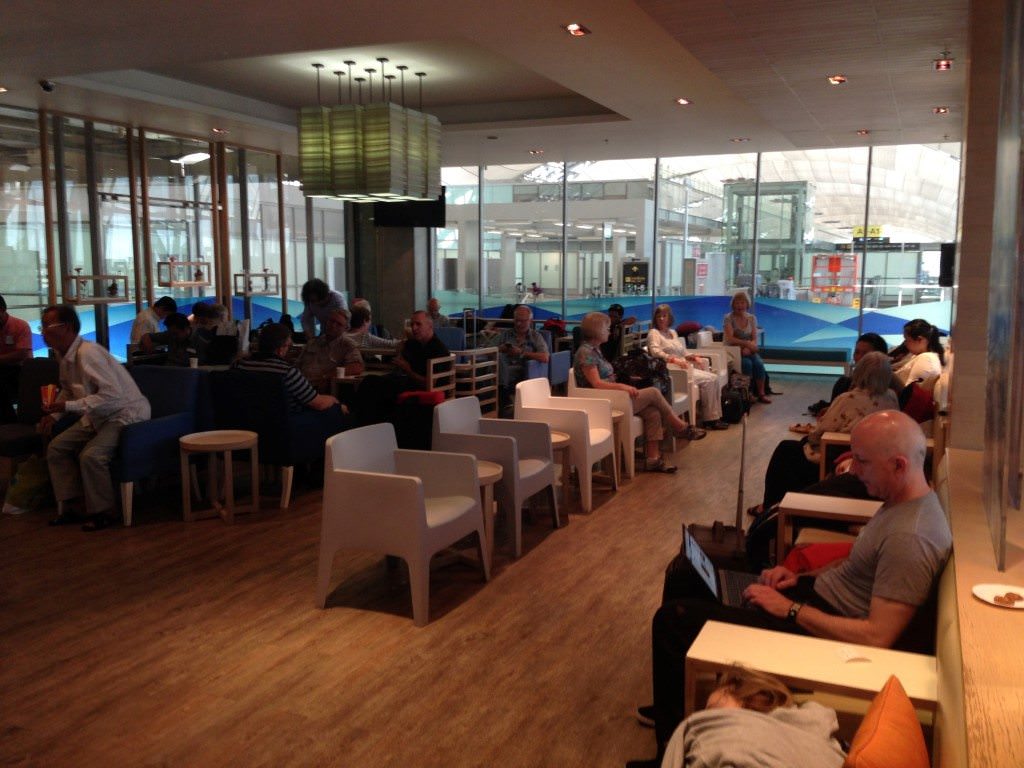 Once checked-in, we were given Fast Track security and immigration passes that had us through the entire process in 10 minutes. Compared to the marathon of endurance I was greeted with when I arrived at Suvarnabhumi International two days ago, this was endlessly pleasant.

As an added bonus, we also got access to Bangkok Airways’ Boutique Lounge on Level 2 of the airport, and not far from our assigned gate of C-2A. Don’t get too excited though: This isn’t the private frequent-flier enclave you might be used to. Every passenger gets access to the lounge, which is on the crowded side and includes a small smattering of beverages like coffee and tea, and some snack foods. Still, it’s a nice touch that North American airlines certainly don’t do. 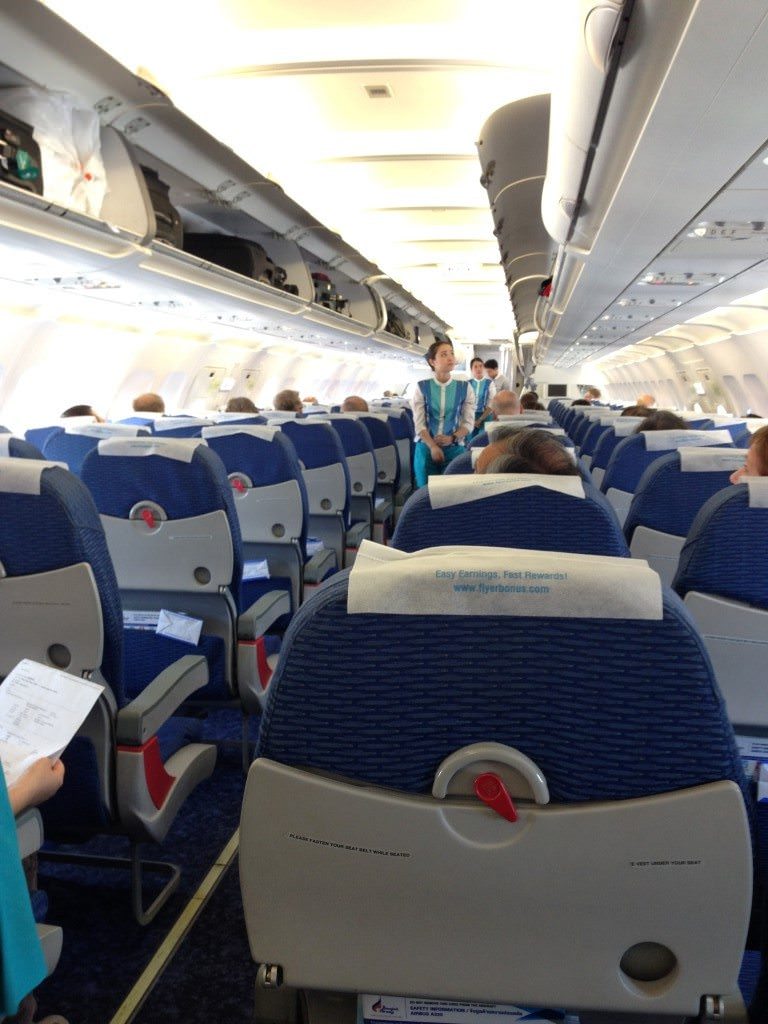 Onboard our Bangkok Airways Airbus A320, as boarding continued. Photo © 2015 Aaron Saunders

Boarding was the usual affair: a half-hearted attempt to get business class passengers to board, and then the floodgates opened. Usually when that happens it means we’re all getting on a bus to a remote gate, and I was not disappointed to see a bus waiting for us at the bottom of the ramp.

Never heard of Bangkok Airways? Here’s the skinny on them: They’ve been in business since 1968, and today operate a fleet of Airbus A319 and A320 narrow-body aircraft, plus two kinds of ATR-72 Turboprop aircraft. Their planes have fantastic paint schemes, and our Airbus A320, registration HS-PPE, was painted in a colourful theme that the airline calls “Mascot.” 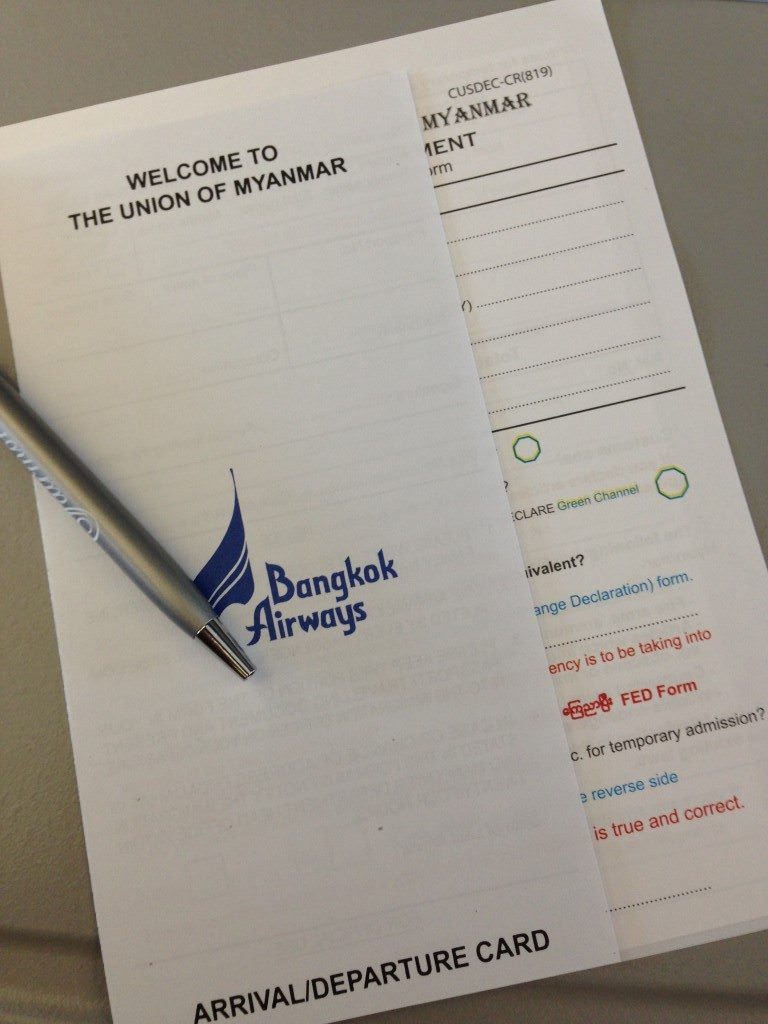 Customs and immigration forms for Myanmar were handed out before we pushed back. Make sure you have a pen and your Myanmar visa handy. Photo © 2015 Aaron Saunders

HS-PPE first flew 10 years ago, in 2005, for TAM airways in South America. It was transferred over to Bangkok Airways in 2008 and has served with them since. Once I boarded the plane, it became apparent that the company has taken good care of this plane. Wall panels look brand-new, and the plane has been given Airbus’s newer-style luggage bins and windows.

Seat pitch (the space between your legs and the seat in front of you) was very good, with 32 inches of pitch on most seats. You can request a window or an aisle when you check in, which didn’t quite work for me, as I was assigned Seat 21E in the middle. Fortunately, two of my fellow guests were to be seated on either side of me, so I easily ended up in the much-more comfortable aisle seat of 21D.

Once we were airborne, the flight attendants sprang into action. On most North American airlines, an hour-long flight barely warrants you a Dixie Cup of flat Coca-Cola. On Bangkok Airways, our one-hour long flight to Yangon merited an entire meal, served with rapid speed by the friendly flight attendants.

Customs forms were also handed out, and I spent most our pre-departure taxi to the runway filling in the required details. 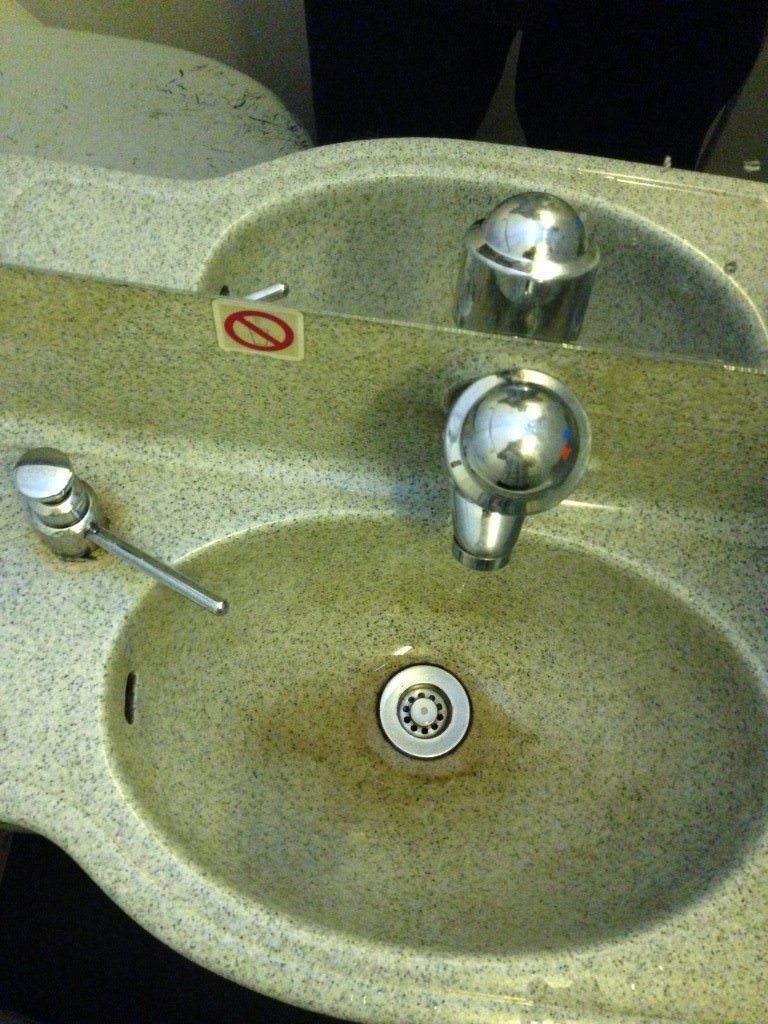 Eww! This could be the grossest plane bathroom I’ve ever seen. Be thankful I’m not showing you the toilet. Photo © 2015 Aaron Saunders

All too soon we began our descent. For such a short flight, Bangkok Airways is very good indeed. The only complaint I have relates to the condition of the aft lavatories on this A320; they were horrifying. Seriously – I fly a lot, and this was the grubbiest, dirtiest plane bathroom I have ever seen, by far. Clearly the refit work performed on the rest of the cabin didn’t extend to the lavatories. Just looking at it made me feel like I needed to bathe in Purell.

After using that bathroom, it’d be nice to wash and dry your hands, right? Wrong! No paper towels were in the bathroom. The food must have cut into the lavatory supplies budget.

Bottom line: a comfortable, safe, reliable airline to fly for an hour or so on. Just don’t use the washroom! 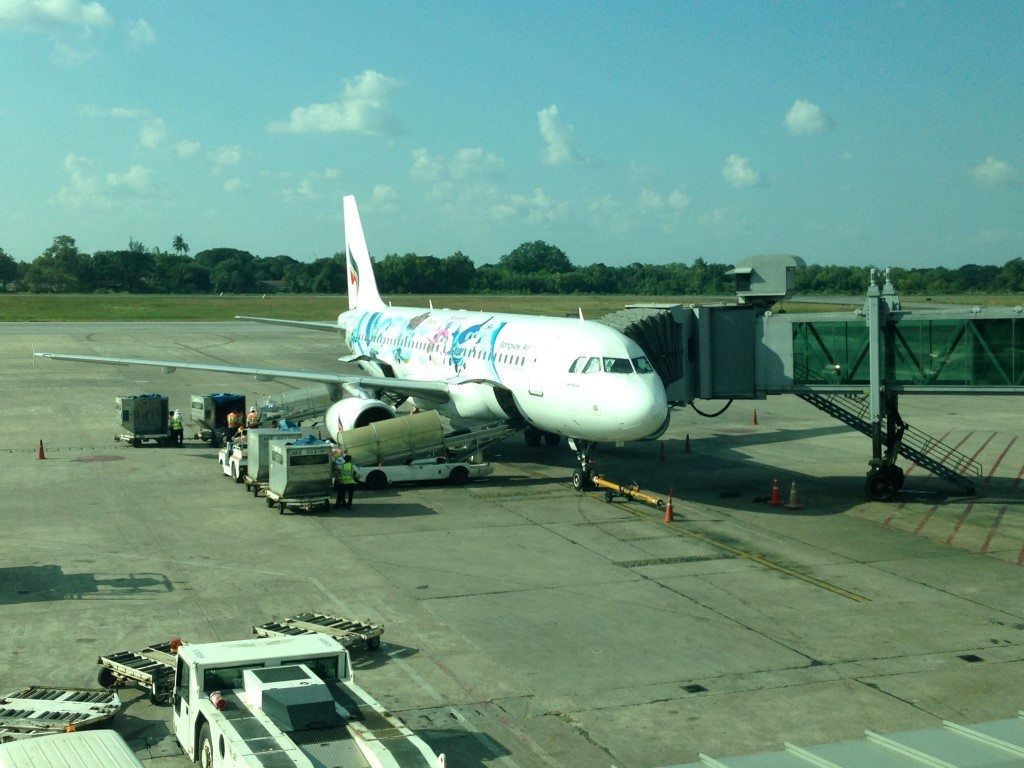 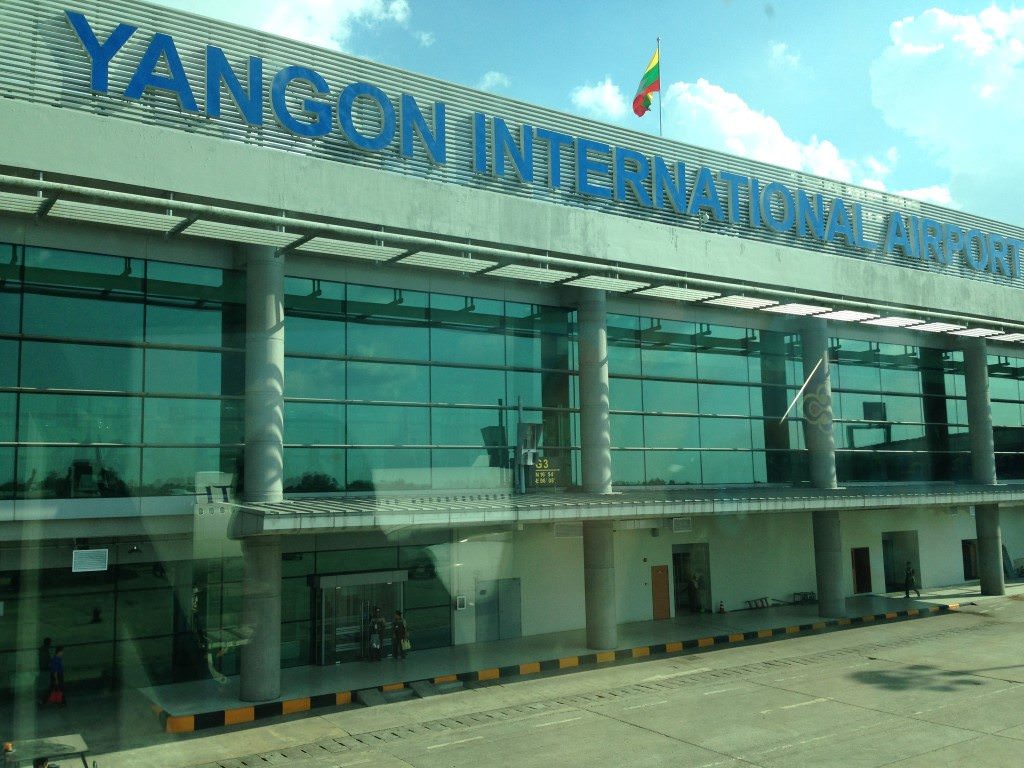 Landing in Yangon, I have to admit I was nervous. I was using Myanmar’s new E-Visa Service that has only been around for a year or so, and which has had an on-again, off-again history. I was concerned there’d be beaurocratic red tape a mile long on arrival, and that I’d hold up the rest of the group. Horrible thoughts played out in my head about all the ways things could go wrong.

They were entirely unfounded.

To start with, Yangon International Airport is quite modern and beautiful. I was expecting something that looked more like LaGuardia; I was disappointed.

Immigration was punctual, efficient and fast. Large signs clearly written in English told arriving customers that if they have used Myanmar’s new E-Visa service they’re not required to go to the Visa-On-Arrival line; instead, they proceed to the regular immigration line. As a bonus, the E-Visa doesn’t have a physical counterpart, meaning you don’t lose a full page in your passport to it.

Total processing time was less than 10 minutes during the middle of the day, with numerous flights arriving. And on the other side of the immigration desks, next to the luggage carousel, was Andy – our Viking Program Director here in Myanmar. 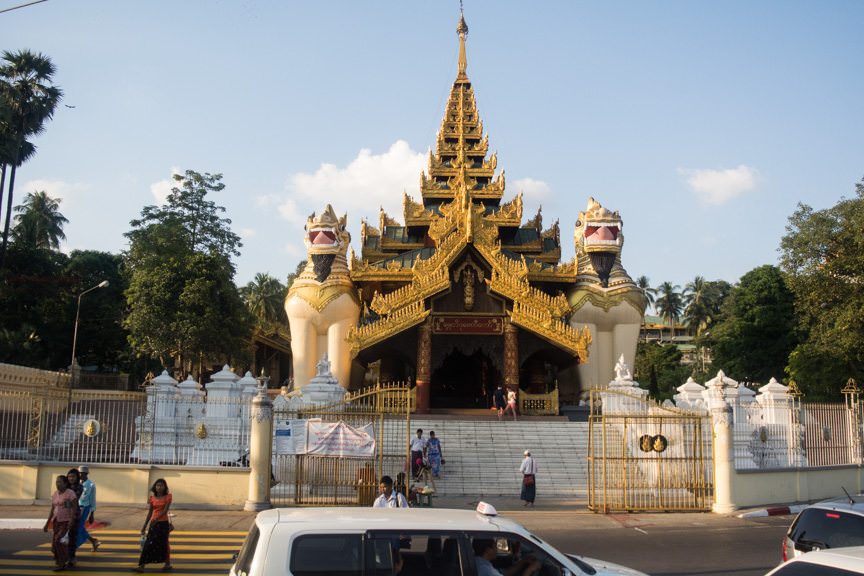 Zipping through traffic in Myanmar, sights like this aren’t uncommon. Photo © 2015 Aaron Saunders 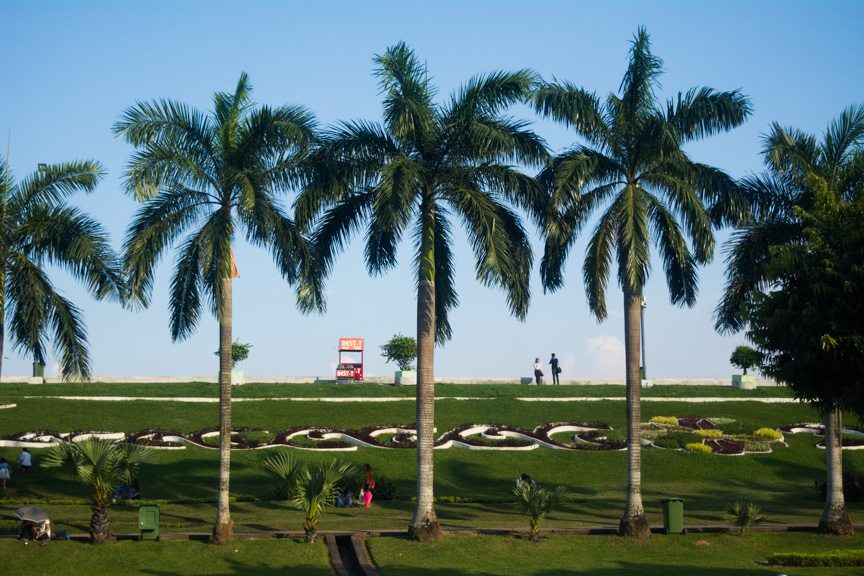 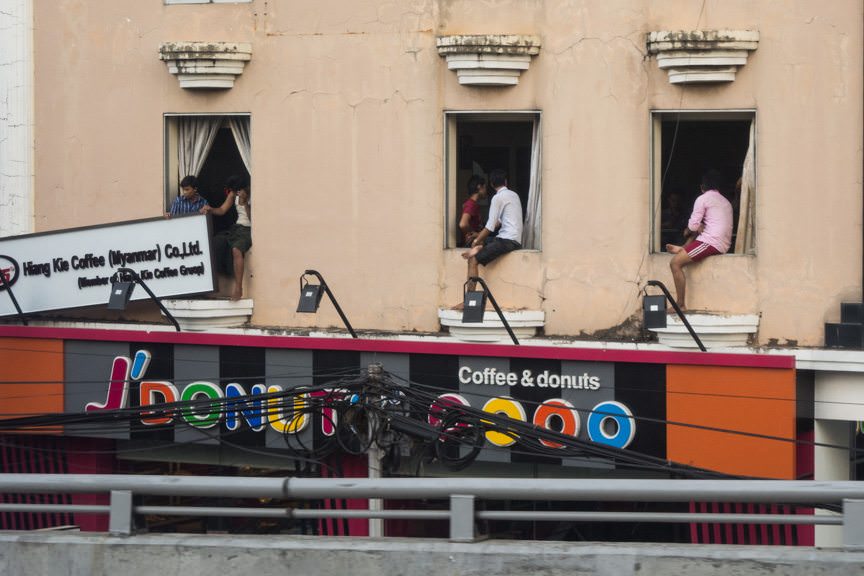 Once again, Viking makes things remarkably easy: You just go over to the luggage belt, identify it for the Viking reps, and they take care of the rest, transporting it from baggage claim, through security, out to the coach.

I stepped outside the airport and it hit me like a brick. If I had expected Myanmar to be less humid, I was kidding myself; the humidity feels ten times greater than Thailand. It’s hot with a capital H.

Our coach ride to the Sule Shangri-La took about an hour, and will go down as the most impressive drive I’ve had from an airport to a hotel in a long time. My first impression of Myanmar is that it is beautiful. Yangon is immaculately manicured. There are ample green spaces adorned with couples strolling along as if it were 1910, with parasols unfurled to keep the sun off their heads. 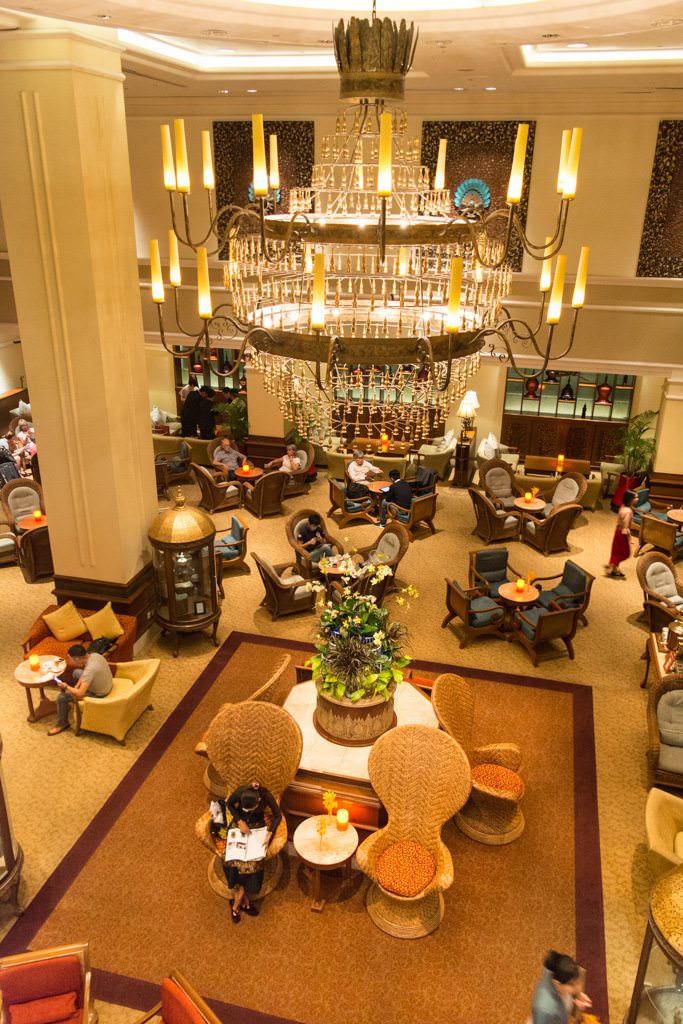 There are also no scooters in Yangon. New law. Which means roads have a very North American feel to them; a feeling only enhanced by all the Toyota Yaris and Honda Fit cars you’ll see along the way.

Some signs speak to Myanmar’s status as a developing country. Crumbling buildings exist next to sparkling new ones. The Yangon train station is an iron metropolis, with old diesel engines belching black smoke into the sky.

And yet, Myanmar is modern. Passengers in busses and cars text on their iPhones to stave off boredom. The cinema across from the hotel is showing Spectre, the new James Bond film. 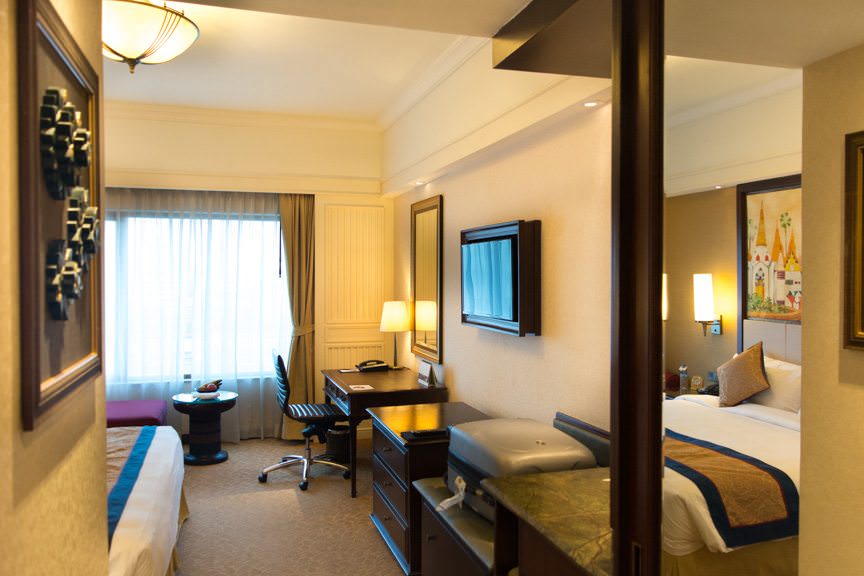 My home for the next two nights at the Sule Shangri-La in Yangon, Myanmar. Photo © 2015 Aaron Saunders 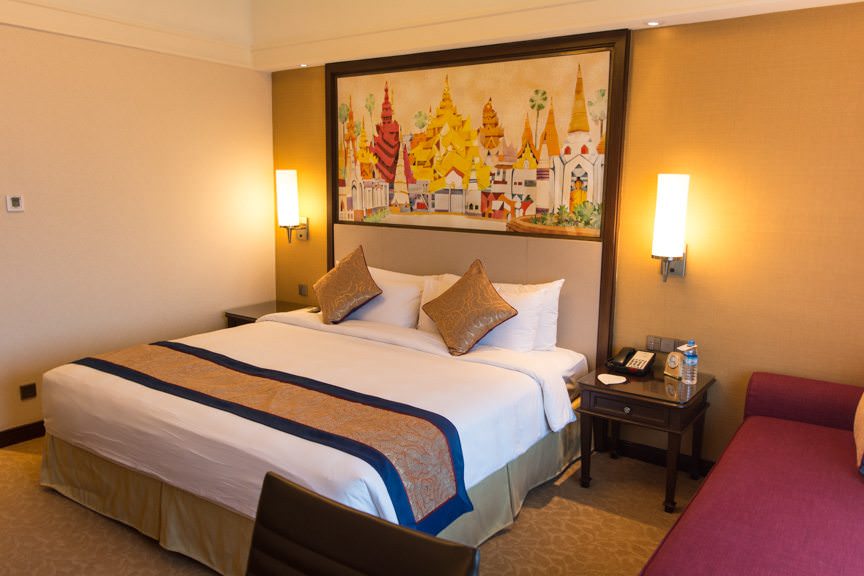 Our hotel, the Sule Shangri La, is also very modern. Once again, check-in couldn’t have been easier, with keycards presented to us without any typical formalities. I’ve got a nice room on the eighth floor overlooking the main street; it’s spacious, though not quite as spacious as my digs in Bangkok. Still, it has all the amenities you’d expect from the Shangri-La, which is one of my favorite hotel brands. 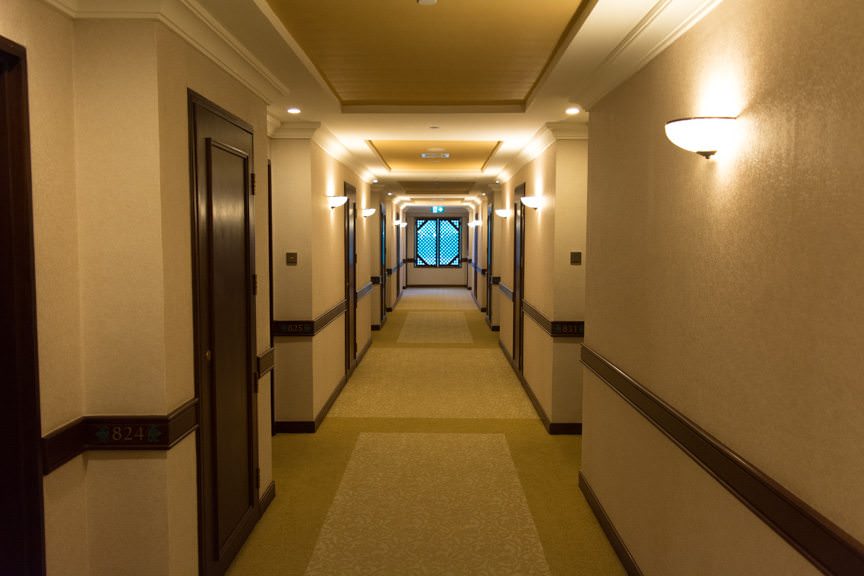 Since I subscribe to the Ernest Hemingway School of Writing, I immediately set out to find the hotel bar, which turned out to be a rather elegant piece of work situated on the third floor. You can almost feel Colonial Burma in the dark wood-panelled walls; in fact, the entire design looks remarkably similar to the Wheelhouse Bar found on most Princess Cruises ships. Hemingway would approve. 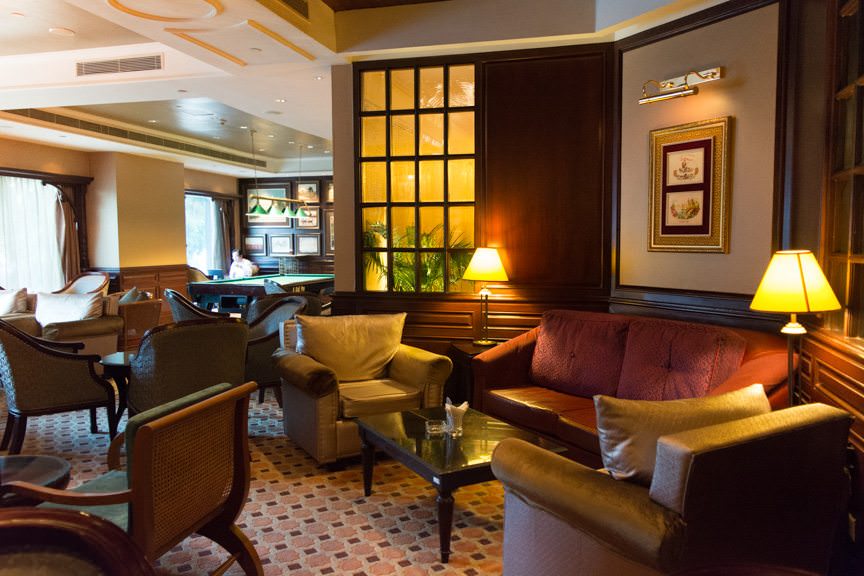 The Gallery Bar at the Sule Shangri-La. Hemingway would approve. Photo © 2015 Aaron Saunders

I also took the time to catch up on the local news via the small English language newspaper, The Global New Light of Myanmar. It’s a very wordy title that disguises the fact that the paper seems to have its finger on the pulse of this rapidly changing country; for example, did you know Myanmar borrowed US$208-million from Japan to finance an eight-lane mega-highway that will criss-cross the country 20 years from now? Or that they tapped into another US$108-million from South Korea to finance additional road and bridge construction? It’s very impressive, and speaks to the ambitions of this evolving place.

Tonight, though, I’m reveling in being here. Even after only a few hours on the ground, Myanmar is nothing – and everything – that I thought it would be. My expectations are confounded; my preconceived notions are shattered.

That’s the cool thing about travel: It demystifies the world, and changes you in the process. 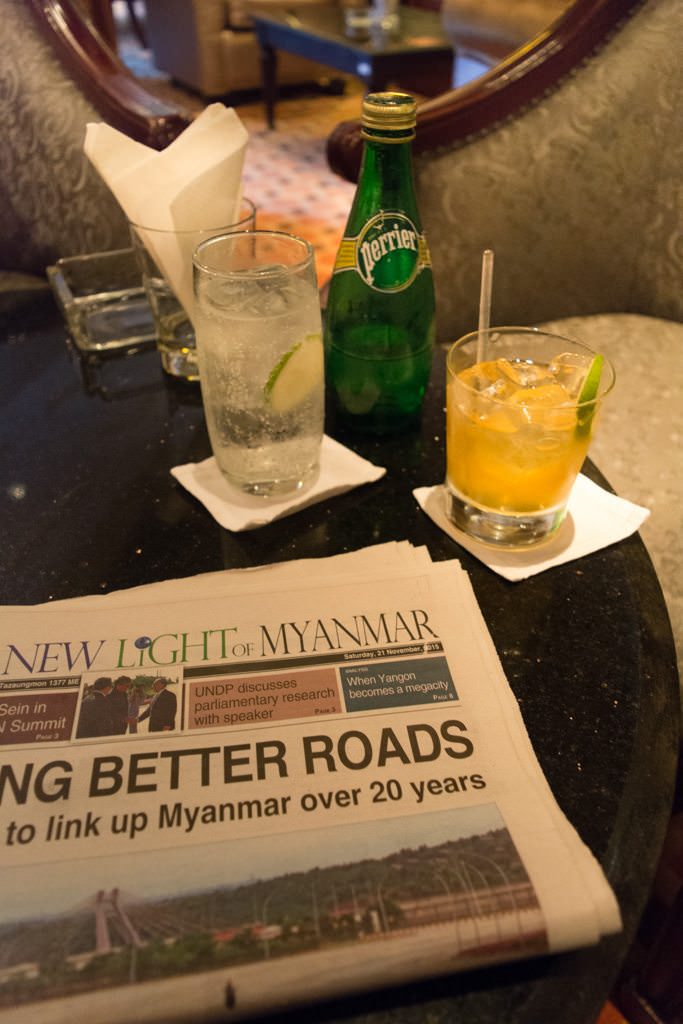 Our Live Voyage Report from Viking River Cruises’ Myanmar Explorer continues tomorrow as we spend the day exploring beautiful Yangon, Myanmar! Be sure to follow along with our adventures on Twitter @deckchairblog.