One Night In Bangkok 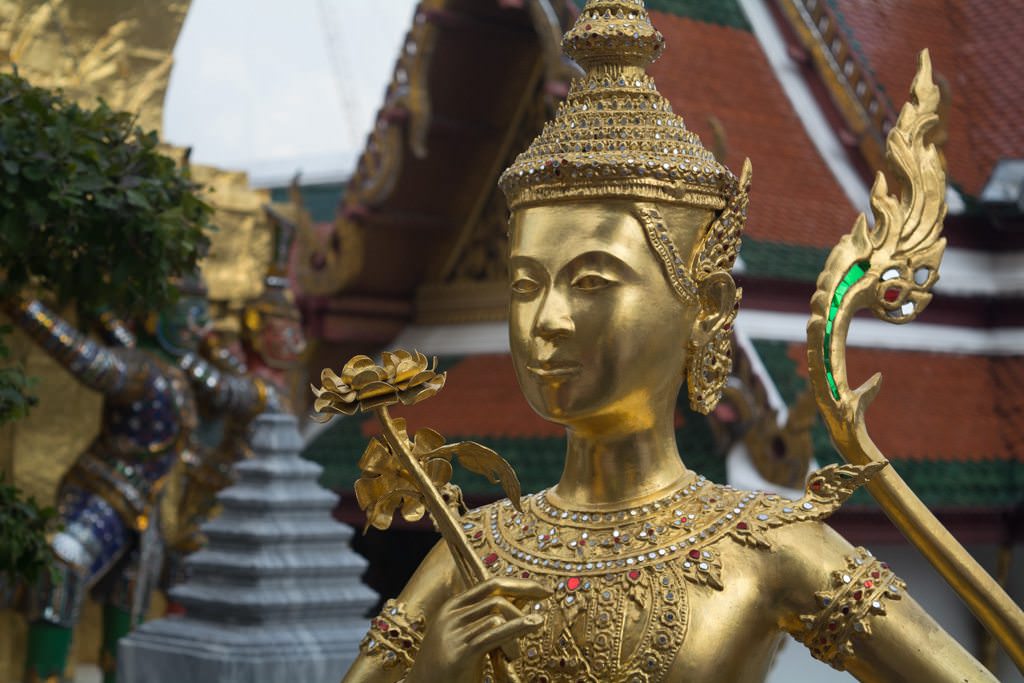 My alarm went off all too soon this morning in my room at the gorgeous Shangri-La Bangkok. I’d turned in at about 3 a.m. after having arrived late from North America, and 7:30 a.m. rolled around with surprising speed. But I was greeted with a gorgeous view from my room; one that I had never known existed in the darkness of night when I had arrived. 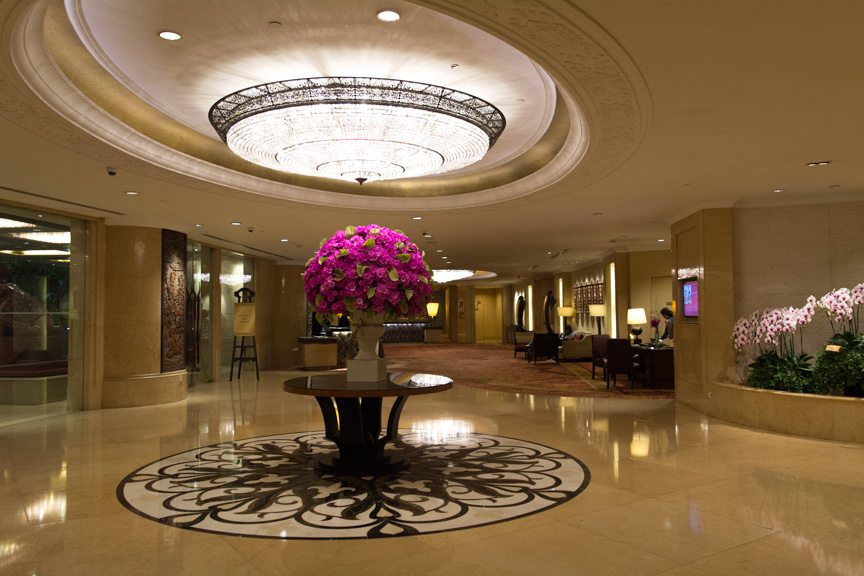 The Shangri-La Bangkok is a superb base. Viking primarily utilises Shangri-La hotels on their Myanmar itinerary. Photo © 2015 Aaron Saunders

The Shangri-La Bangkok is used by Viking River Cruises as the starting point for the company’s 15-night Myanmar Explorer river cruise itineraries. This is primarily due to the fact that more international airlines fly into Bangkok than Yangon, Myanmar, but it also serves the dual function of allowing guests to briefly see and experience Thailand. I, for one, am all for that.

The Shangri-La Bangkok is a massive landmark on the Bangkok landscape. With 802 guestrooms and suites on-site, it’s one of the largest hotels in the city. Located on the banks of the Chao Phraya River, the hotel is situated close to the city’s major shopping and business districts. To explore further afar, a nearby Sky Train station gives guests the ability to zip all around this sprawling metropolis. 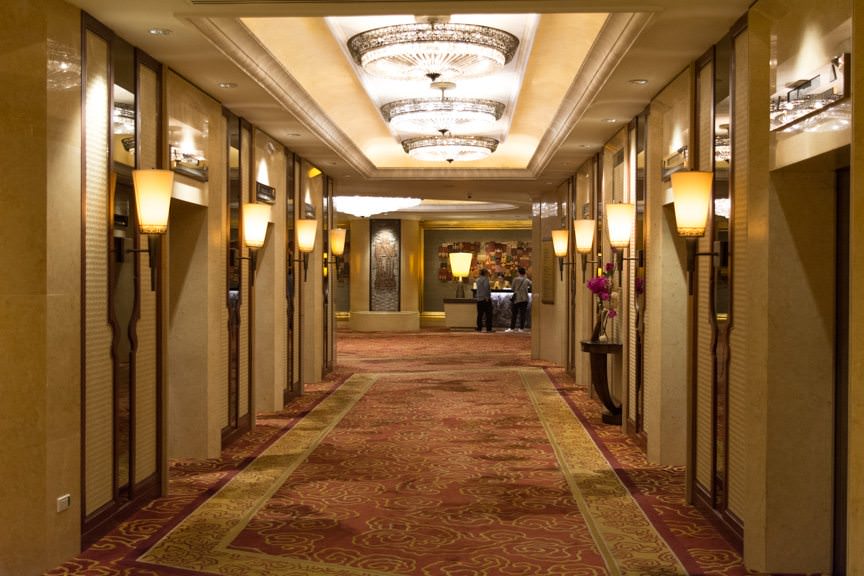 Even the main elevator banks at the Shangri-La Bangkok are elegantly decorated. Photo © 2015 Aaron Saunders

My room is cozy and comfortable, and boasts an impressive amount of personal space. I particularly like the loveseat nestled underneath the bay windows that look out over the Chao Phraya River, as well as the North American-style plugs in the room. Of course, Shangri-La’s excellent amenities don’t hurt, either.

Check-in earlier this morning couldn’t have been easier: My keycards were ready at the front desk, and I had the check-in agent program a wakeup call for me at half past seven. To make life easier, I also did something I’ve actually never done before at a hotel: I filled out the room service breakfast order form, hung it on my door, and went straight to sleep. 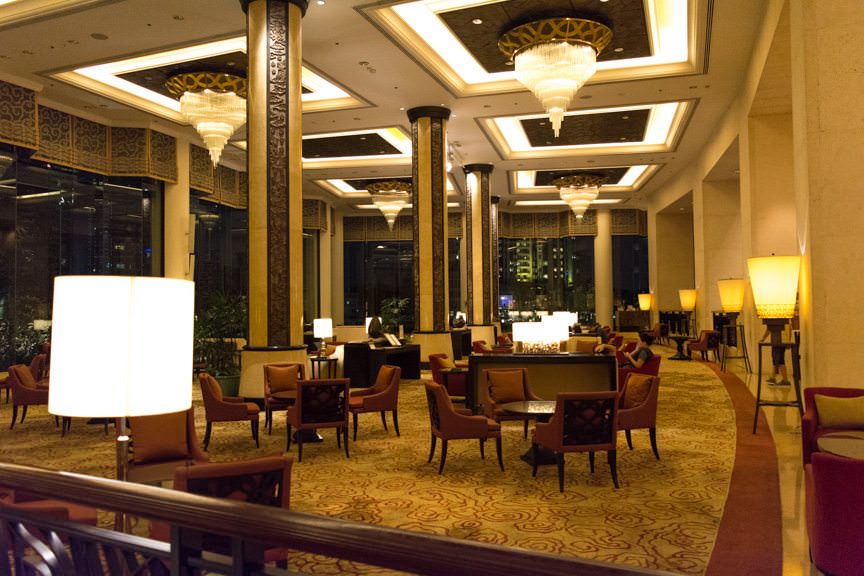 Our day started at nine this morning, with a welcome briefing by our local Thai guides, Dom and Ake. Dom and Ake – not their real Thai names, but nicknames we can call them by – met us at the Viking desk located on the first floor of the hotel, and led us to the briefing room, where we were given details of our day, and a preview of what to expect from tomorrow when we fly to Yangon, Myanmar. 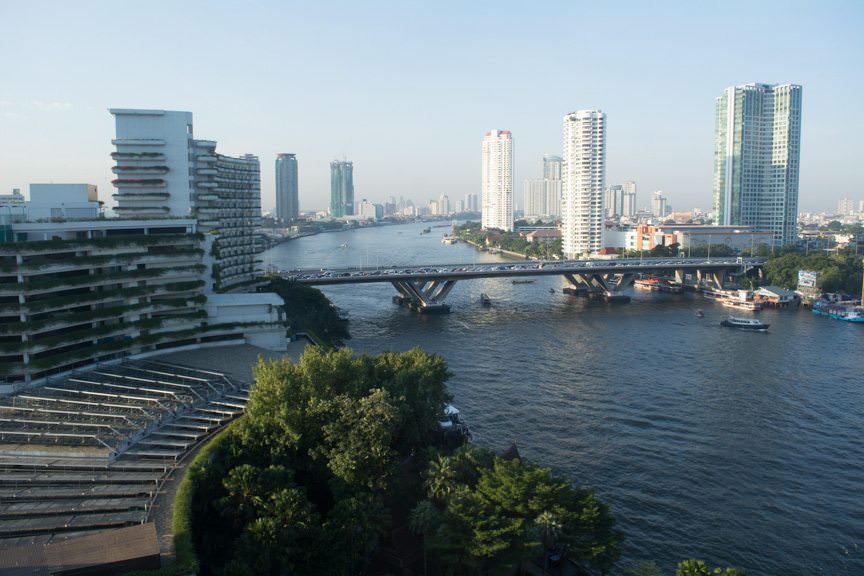 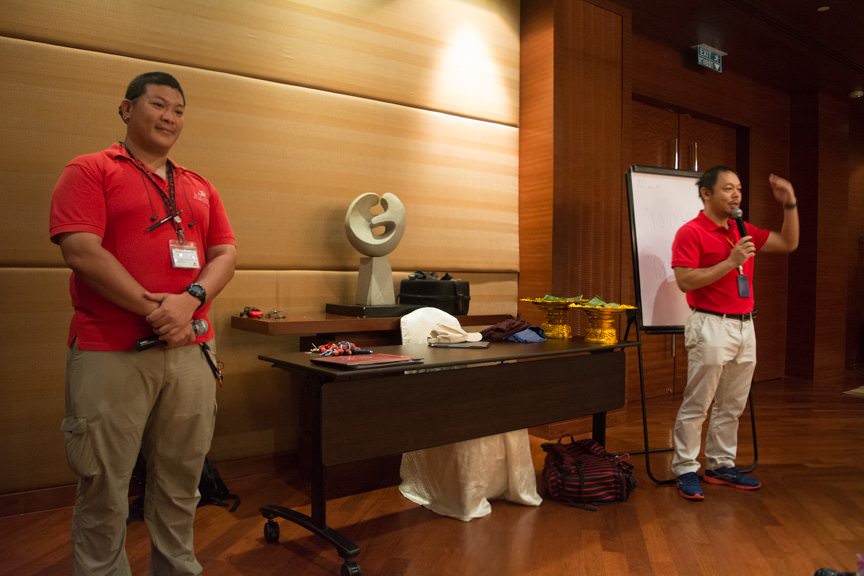 Our local Program Directors, Dom and Ake, explain our upcoming days to us. Photo © 2015 Aaron Saunders

Dom and Ake covered everything in great detail. Wireless QuietVox audio headsets were distributed to each guest, along with a Viking River Cruises luggage tag pre-marked with our stateroom number. They touched on currency exchange here and in Myanmar; connectivity issues and considerations (internet and cellular service will be touch-and-go from Yangon onward), and more. They also addressed the recent terrorist attacks in Paris, and assured guests that every precaution has been taken here in Asia. 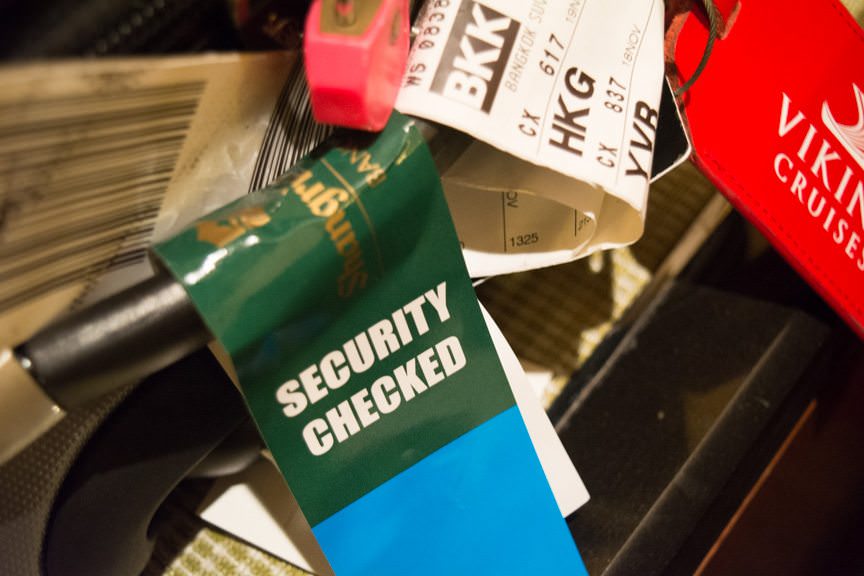 Luggage (hand and otherwise) is screened upon entry to the Shangri-La Bangkok. Photo © 2015 Aaron Saunders

As evidence of that, both my luggage and carry-on bags were put through an X-Ray mchine here at the hotel last night. Having passed, both bags were tagged with a sticker saying they’d passed inspection. The last country I saw that in was Egypt. While inconvenient, the Thais have good reason to take security seriously: They, too, were the victims of a terrorist attack. In August, a bomb was detonated at the Erawan Shrine in the heart of Bangkok. Twenty people died, another 125 were injured.

With better thoughts in our minds, we set out to explore the beautiful-beyond-description Grand Palace, which dates back to 1782 and is the home of the King of Thailand. Today, the complex features the Royal Residence, throne halls, memorial stupas, working government offices, and the renowned Temple of the Emerald Buddha. 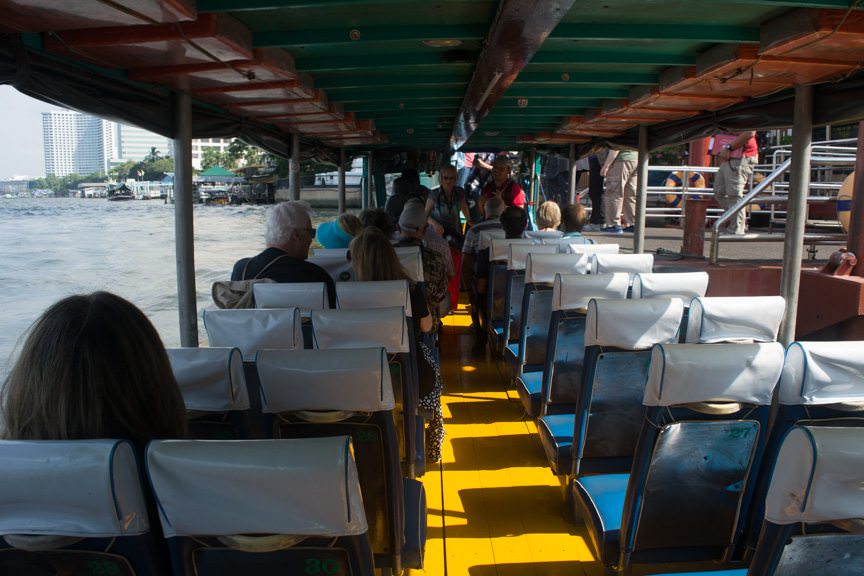 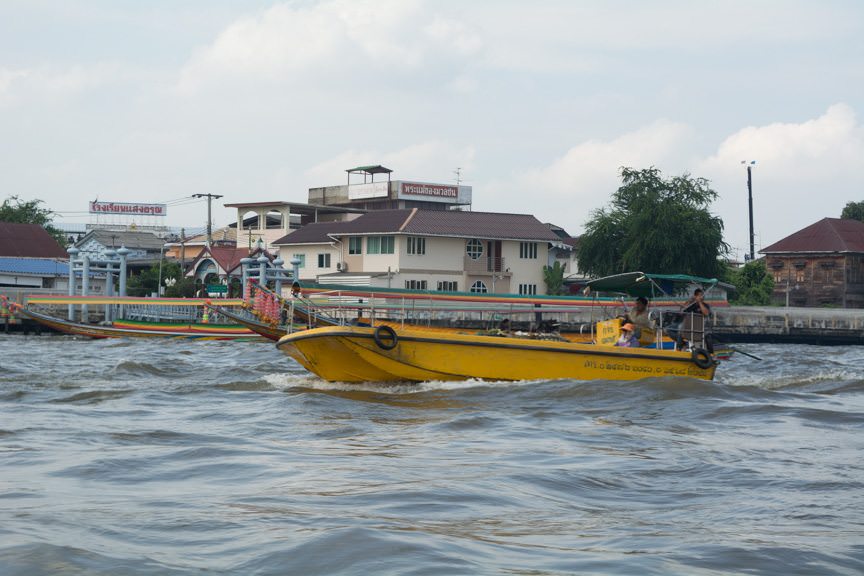 … for our journey down river to the Grand Palace. Photo © 2015 Aaron Saunders 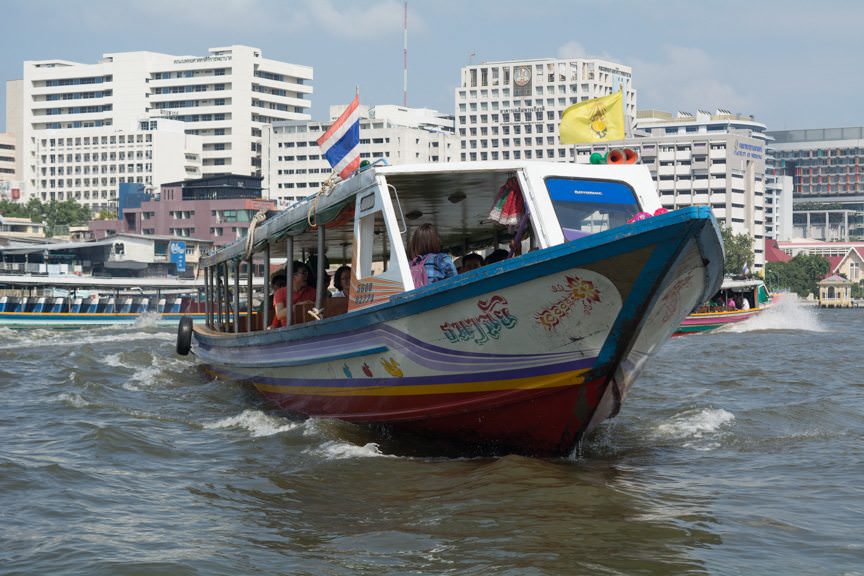 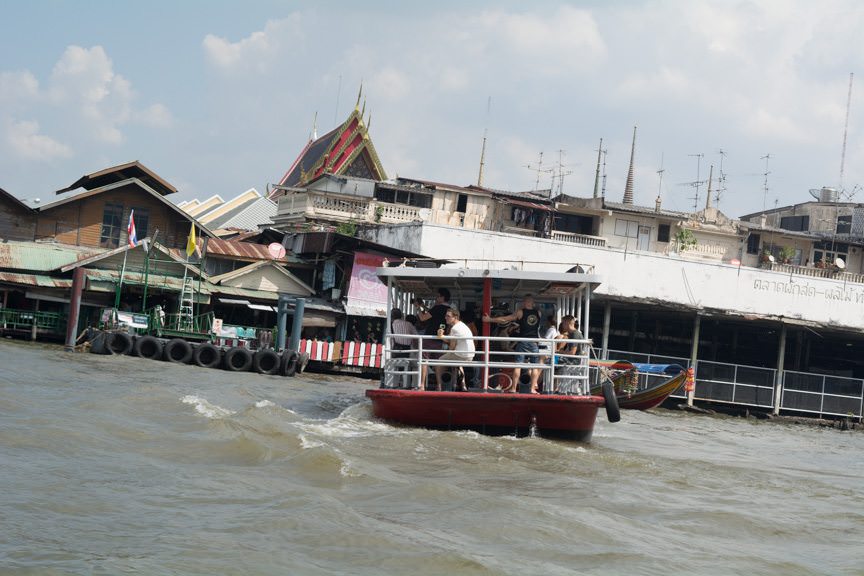 … and marine traffic has the same haphazard quality to it that traffic on-land does. Photo © 2015 Aaron Saunders

Half the world seems to have had the same idea to visit here today: The place was packed. I mean jam-packed. Keep an eagle-eye on your guide while you’re here; the chance of you losing your tour group seems pretty high. Ditto for your wallet; you’ll want it in your front pants pocket!

Keeping hydrated is also a good idea; within half an hour, the humidity had increased so much that it was easier to count the areas of my body that weren’t perspiring at an alarming rate. To that end, Viking offers complimentary bottled water while on tour, which is especially important in this part of the world. 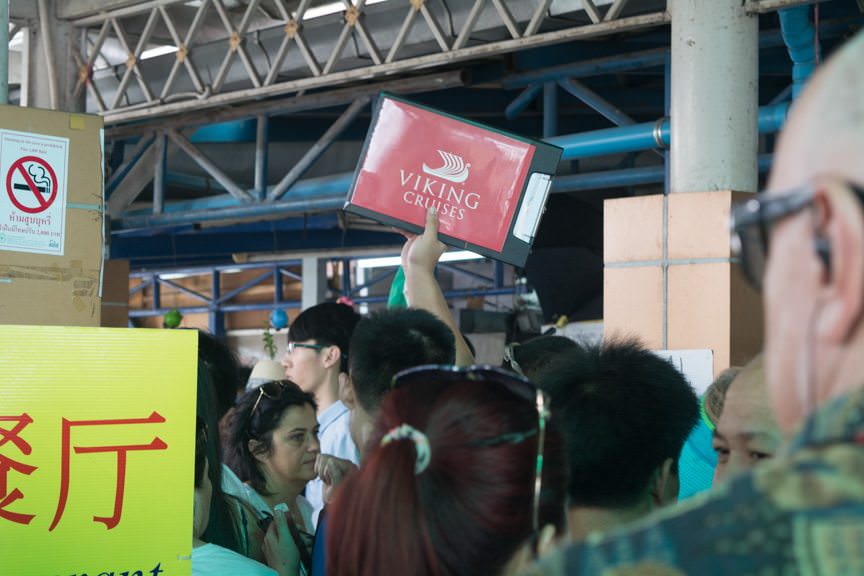 The temple complex is both fantastical and intricate, with an asymmetrical design that is owed to the progressive construction of buildings and monuments.

Anchoring the entire complex is the Temple of the Emerald Buddha. Buddhists come here to pay their respects to Buddha, and numerous signs (including those on arrival at the Bangkok Airport) warn that Buddha is to be respected; insulting Buddha, purchasing statues of Buddha, and even displaying tattoos of Buddha remain illegal here. I don’t know how many readers have tattoos of Buddha, but if you do, you’ll want to cover up. 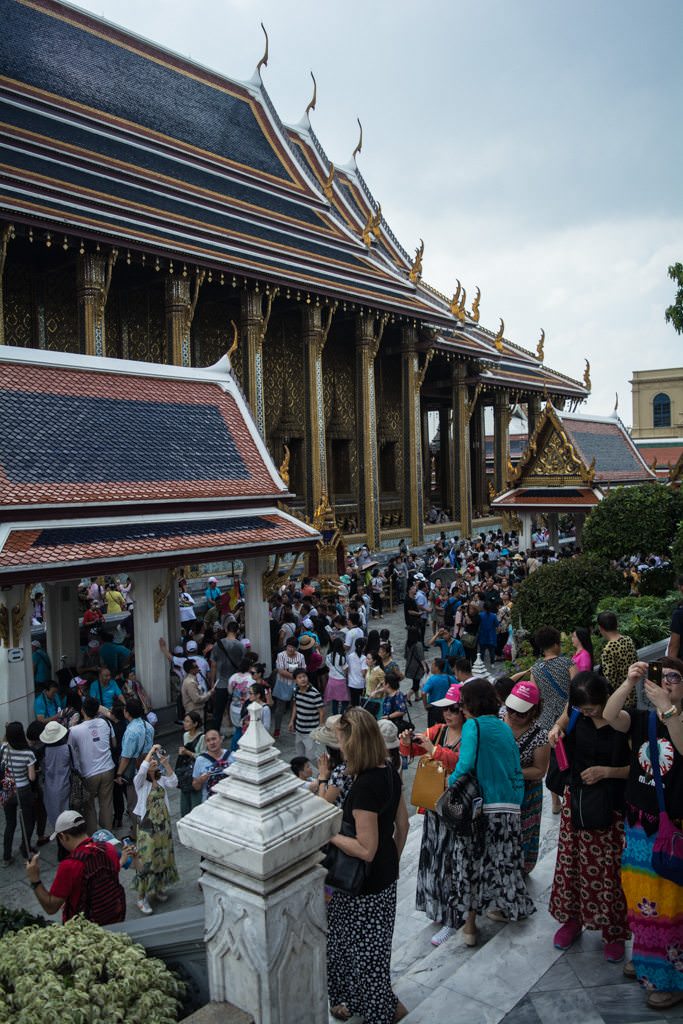 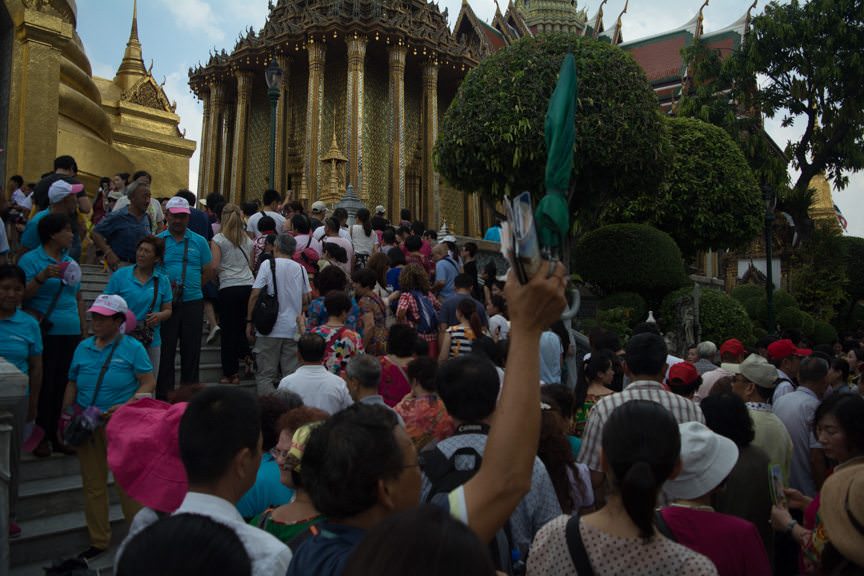 The Emerald Buddha is actually made of jade; first discovered in 1434 in Chiang Rai, it was formerly covered in plaster and was thought to have been just another image of Buddha. Later, an abbot noticed that the plaster was flaking off and mistook the material underneath for emerald. The name stuck, and today this jade artifact is still referred to as the Emerald Buddha.

Some images of this fantastic tourist site: 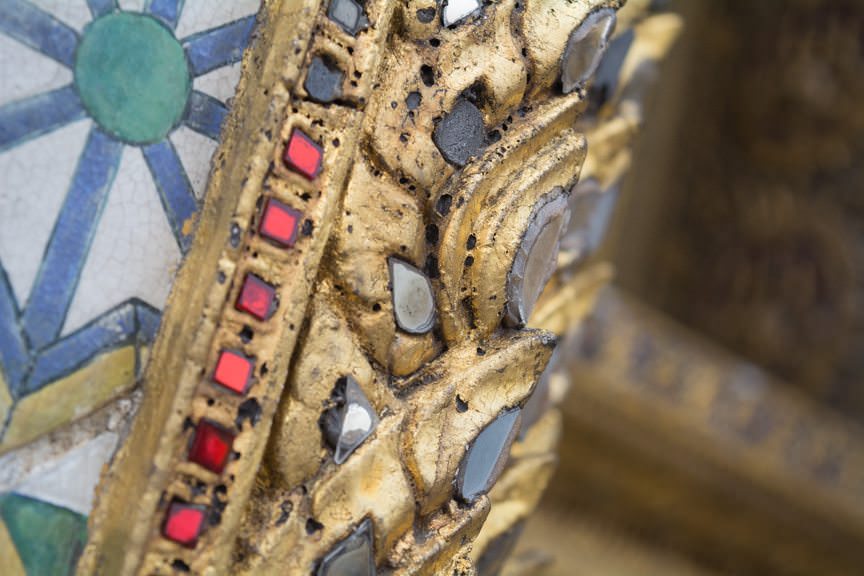 The attention to detail here is incredible. Photo © 2015 Aaron Saunders 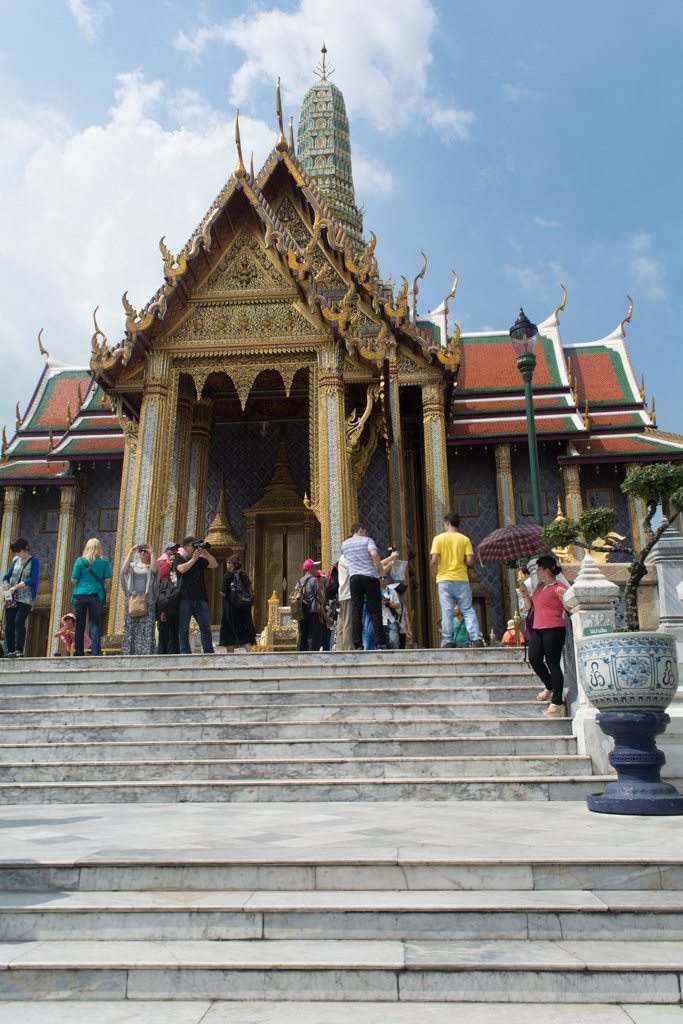 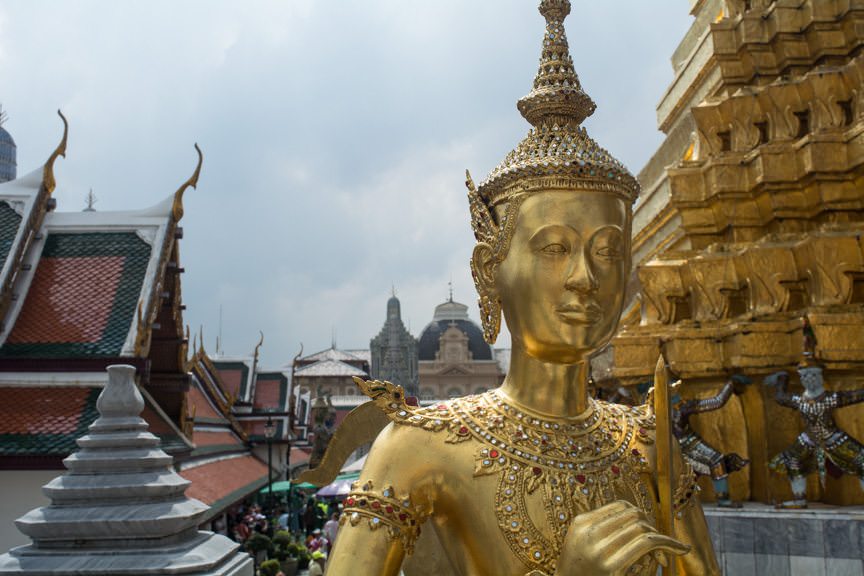 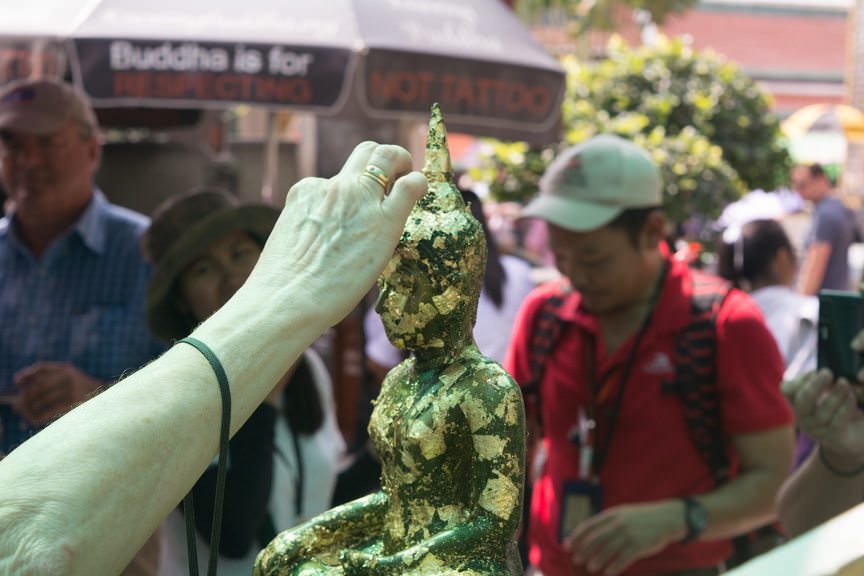 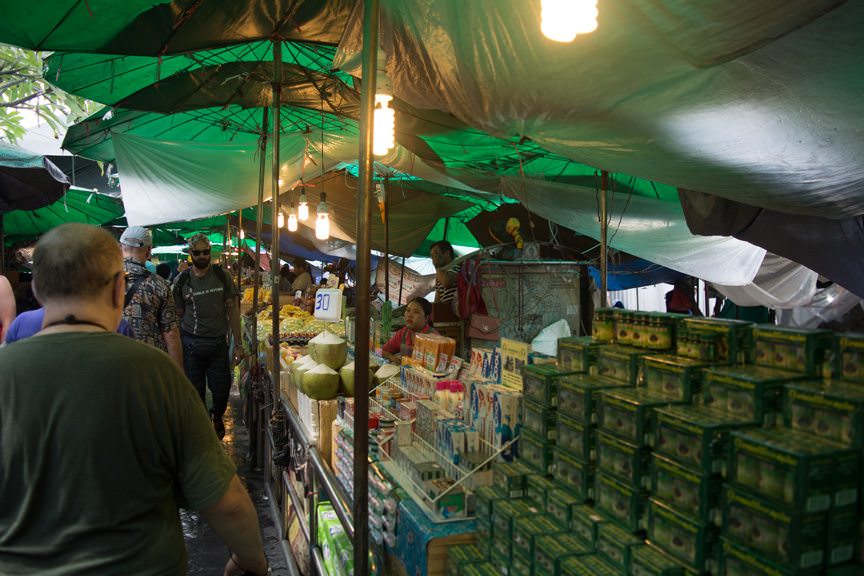 Walking back to the river launch through a local market; a real cultural experience! Photo © 2015 Aaron Saunders 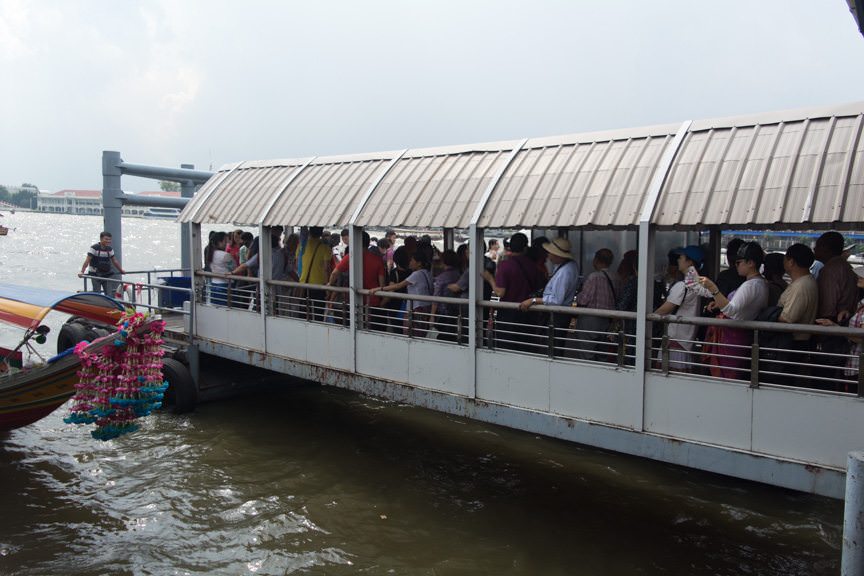 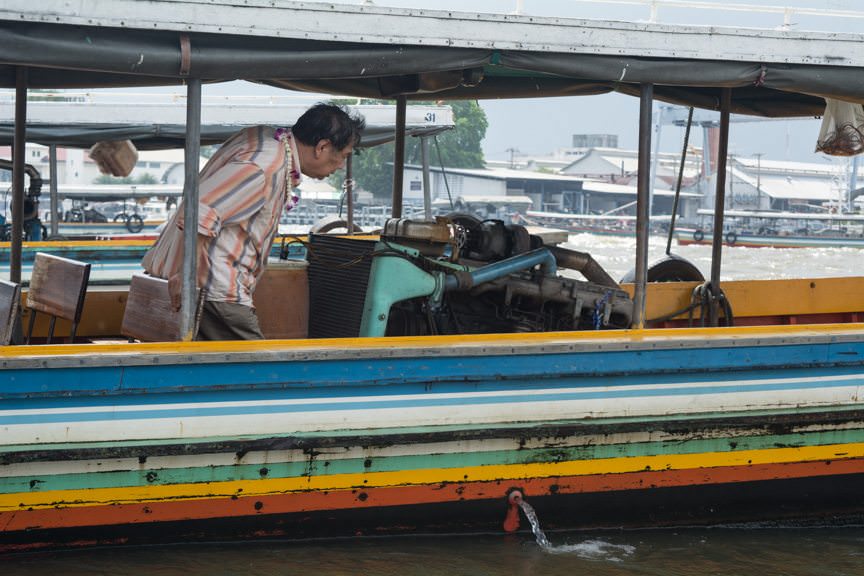 …one passenger overlooks the condition of the ship’s engine. Photo © 2015 Aaron Saunders 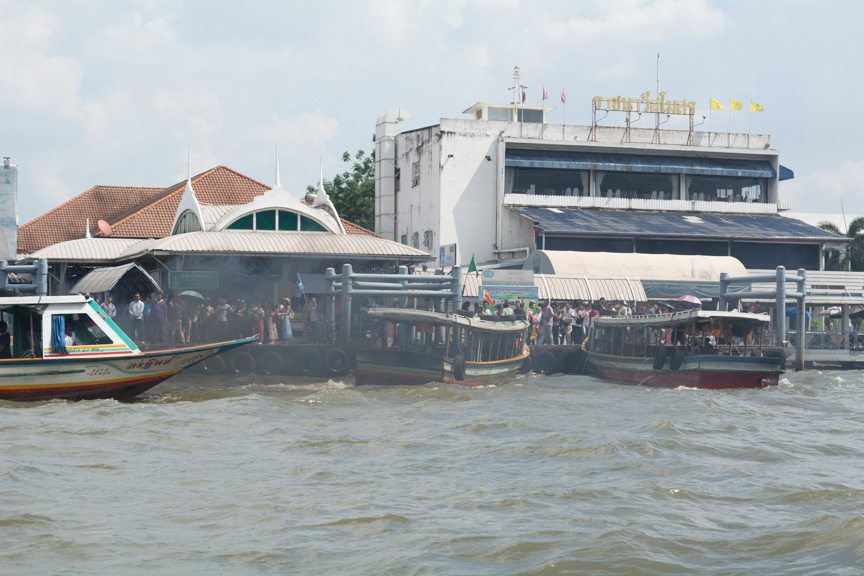 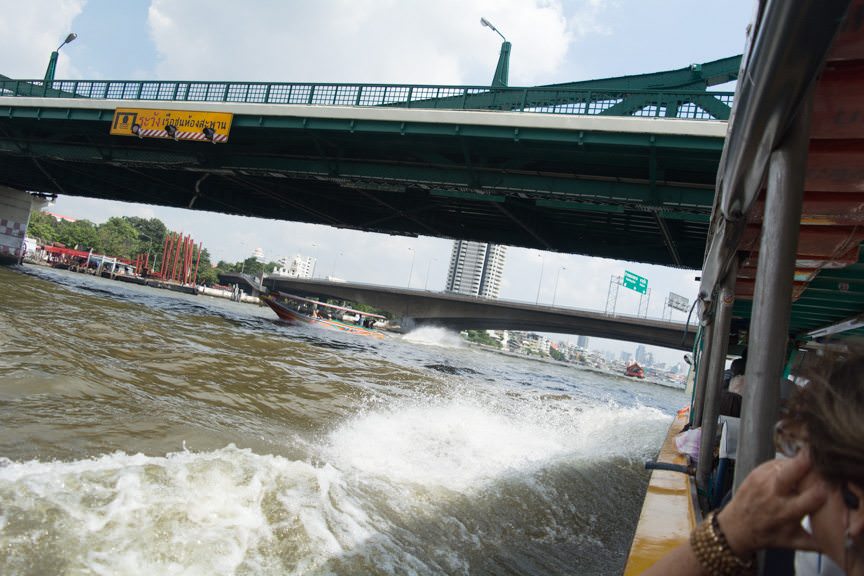 Zipping back to the Shangri-La! Photo © 2015 Aaron Saunders

After free time this afternoon (during which I wrote, napped, and had myself a Singapore Sling in the Lobby Bar at the Shangri-La), we reboarded another riverboat after dusk for a cruise to our evening dining venue: the Supatra River House, where we enjoyed a private group dinner.

I have an allergy to nuts, which is unfortunate because Thai cooking relies very heavily on peanuts and other nuts. Travelling through Asia sometimes causes me a great deal of stress; peanut oil is like mother’s milk over here, and I am constantly on edge about ordering anything that has the slightest chance of being cooked in it. 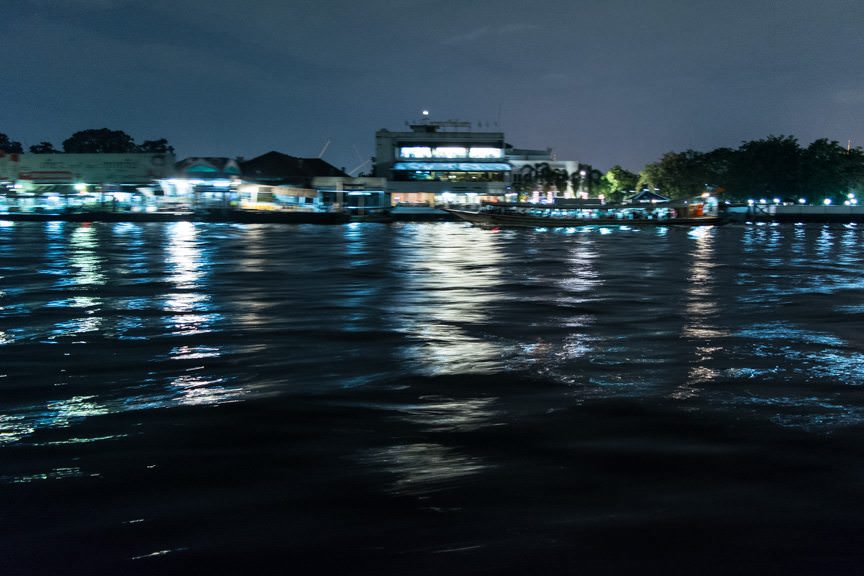 Tonight, we sailed back down river to the Supatra River House for a local Thai dinner ashore. Photo © 2015 Aaron Saunders

However, I’d tell others who have similar allergies this: A group tour is what you want, and Viking takes allergies very seriously. Our Program Directors here in Thailand had already informed the restaurant of my nut allergy, and the Supatra River House whipped me up a variety of dishes that were guaranteed to be nut-free. It took an amazing amount of stress off of me, and I was able to enjoy some authentic, if slightly-modified, Thai cuisine! 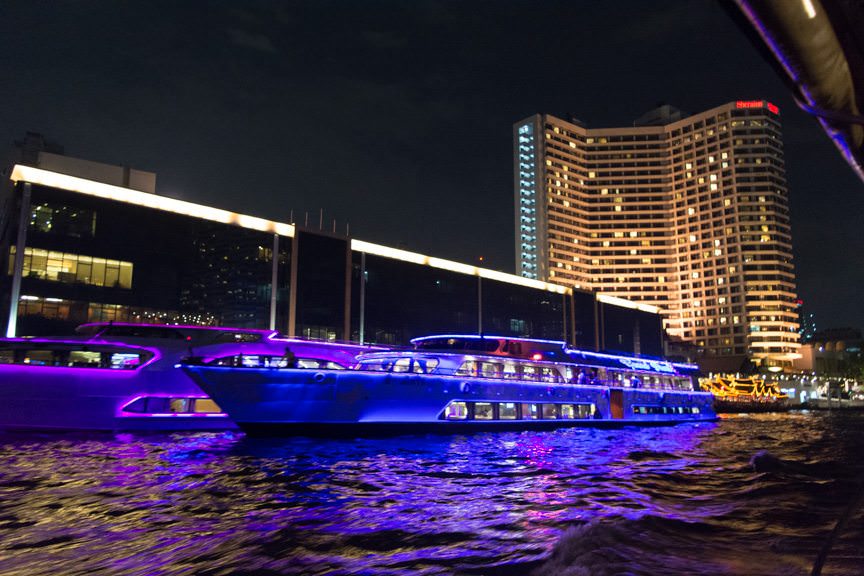 Maybe we can convince Torstein Hagen to have lighting like this on the next Viking Longships? Photo © 2015 Aaron Saunders

So how many dishes had nut-based products in them? All but two: the soup and the fresh fruit. I knew the possibility of ingesting nuts was high in Thailand, but I never expected that 98 percent of our set meal had nuts in it. Having special nut-free dishes created wasn’t just a nicety, as a few of my fellow guests thought at first – it was an absolute necessity. For me, it’s relaxing and reassuring to know that Viking takes allergies and dietary requirements so seriously. 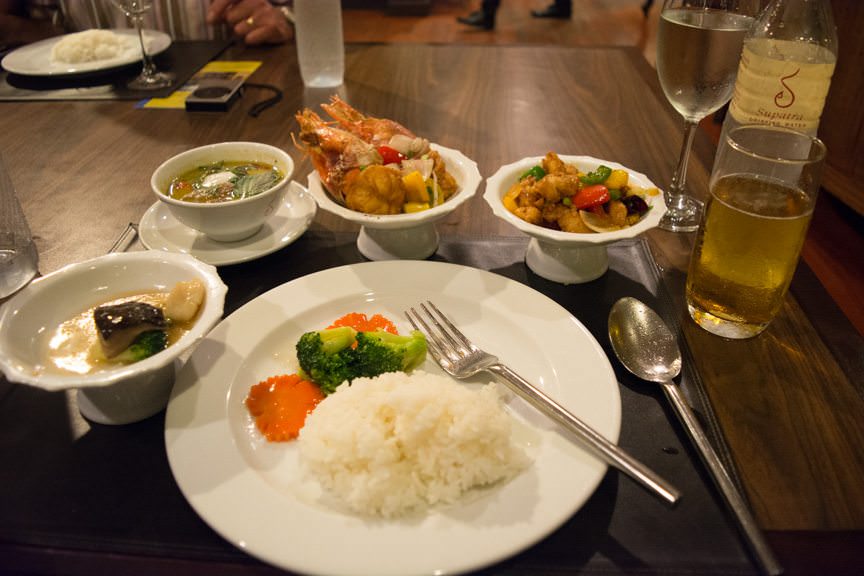 Full and exhausted, it’s an early evening for me tonight, as I crawl back into bed at the Shangri-La. Tomorrow, we fly to Yangon – and our Myanmar adventure with Viking River Cruises kicks into high gear! Internet service is spotty there, so I don’t know if it will be possible to share my adventures live from this point on – but I will post as much as I am able to live, and the rest upon my return. 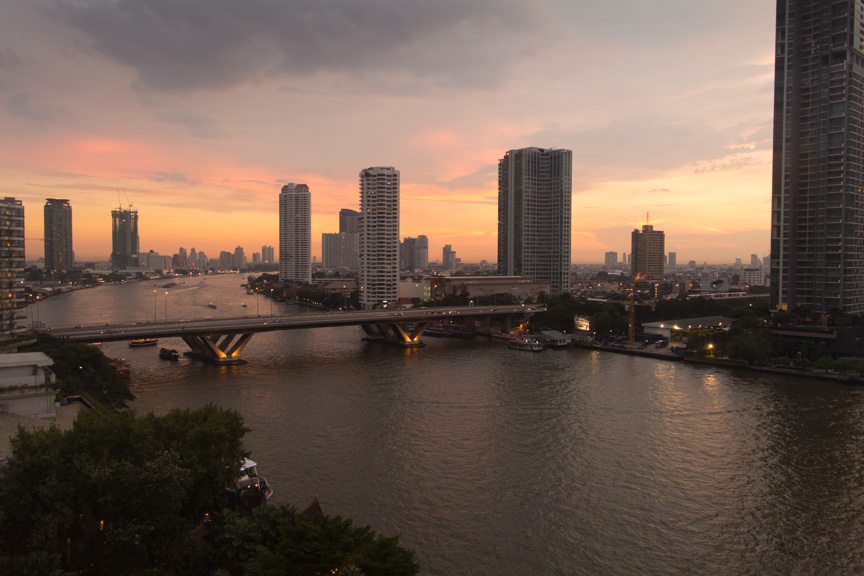 Our Live Voyage Report from Viking River Cruises’ Myanmar Explorer continues tomorrow as we travel to Yangon, Myanmar! Be sure to follow along with our adventures on Twitter @deckchairblog.