“They make one of the finest sights in the world, exquisitely finished, splendid, and costly. When illuminated by the sun they are especially brilliants and can be seen from a great distance.”
– Marco Polo, 1275 AD 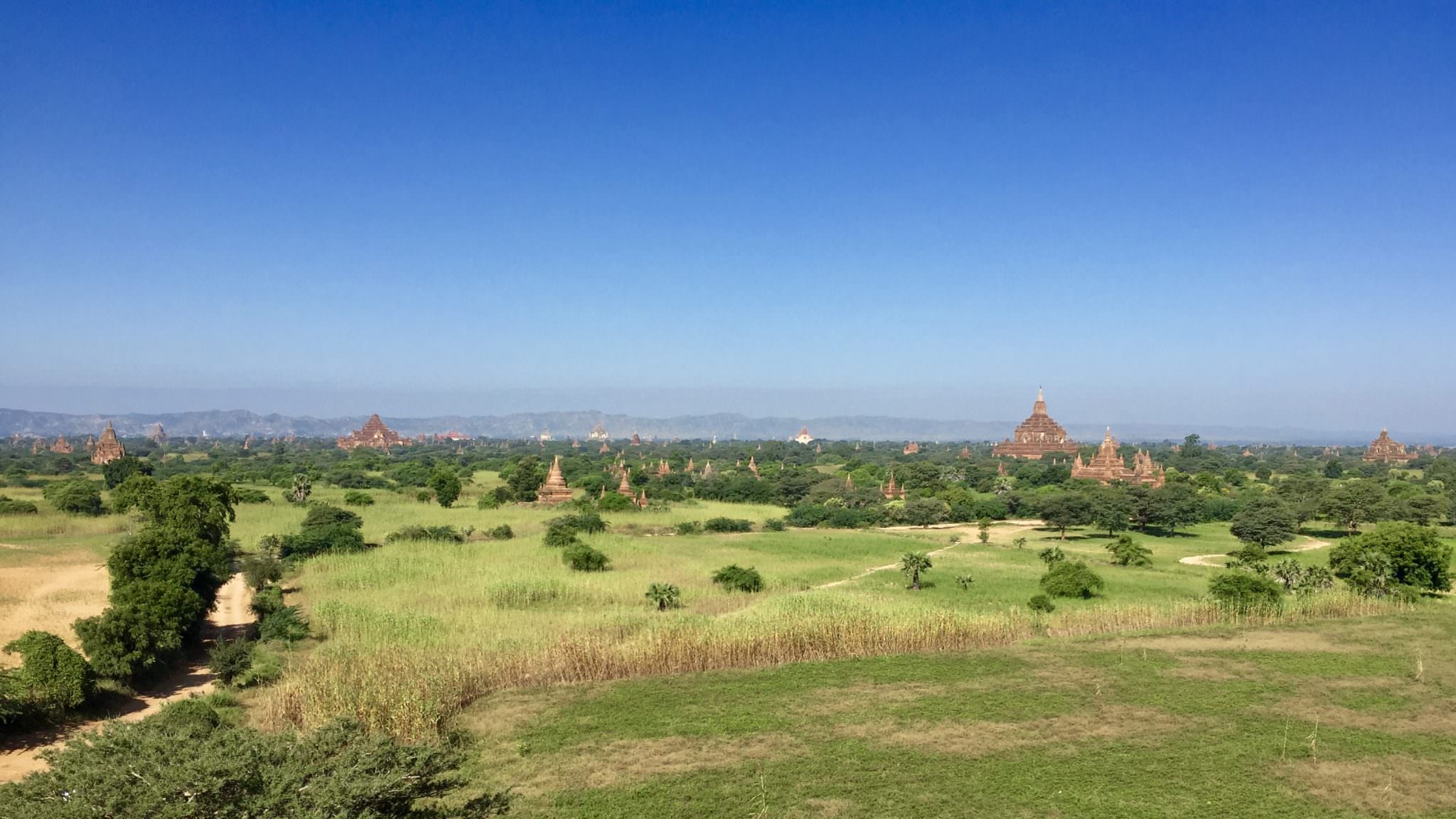 When most people think of Myanmar, they think of Bagan’s iconic skyline. If you Google image search “Myanmar” you’ll find that Bagan isn’t just the top hit, it’s nearly the only hit. In a land where the golden architecture already seems otherworldly, the possibility of a place like Bagan even existing it almost too much for the mind to take in. It doesn’t feel real. The beauty is too much, the stupas are too numerous, the scale is too grand. Built between the 9th and 13th Centuries, there were originally 10,000 stupas and temples. Ten thousand! Can you imagine? Somewhere between 2,000-3,000 remain today.

To get any real sense of the scale, you need to get above the skyline. You can take a $380 USD 60-minute hot air balloon ride, or you can hike. The first thing we did this morning was hike to the rooftop of the Phya That Gyi (a pagoda), constructed in the 13th Century. From that towering height, the 26 square miles that remain of ancient Bagan rolled out before us in indescribable 360-degree views. It was worth every drop of sweat it took to get up there, and there were many. Much like the beauty of Bagan, the humidity is also indescribable.

We kicked off our shoes and climbed a narrow inside passageway of small, well-worn, steep stairs. Then we popped out onto the outside of the structure, climbing terraces of worn brick, traversing nooks and crannies along the side, all the way to the tippy top. This seems an obvious time to mention the physical requirement of the trip. Viking explicitly states in their marketing materials that this itinerary demands a certain degree of physical ability. Potential passengers would be wise to not gloss over that. That being said, our Program Director was patient and helpful. Some people stayed in the bus, some sprinted up the side of the temple. Know that, out of respect for Buddhist traditions, you are barefoot for a solid 65% of the trip, and know that you’re adventuring in a virtually undeveloped countryside. Know your own skill level and limitations. 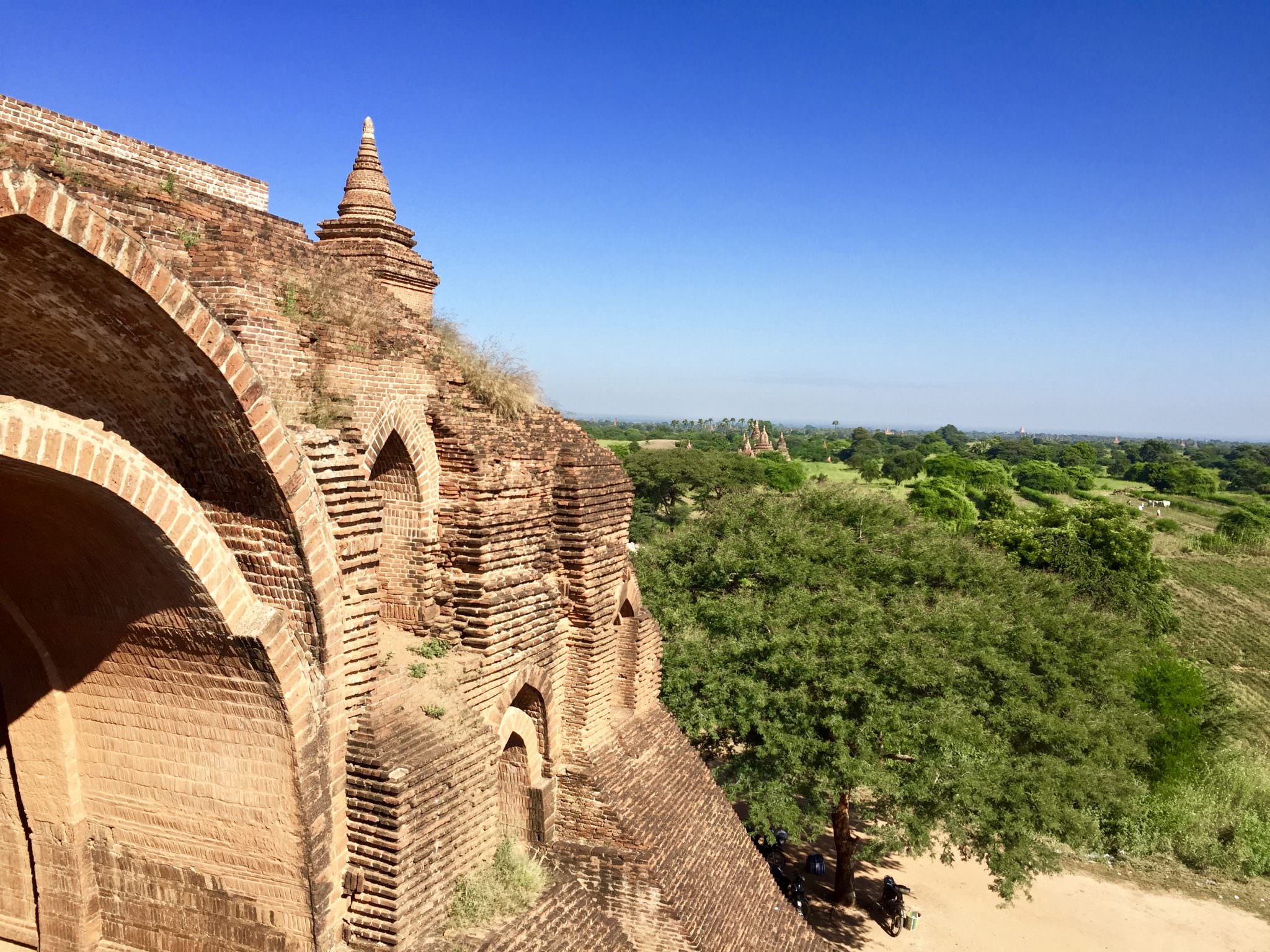 One perspective of the ascent. Those are motorcycles under the tree, for scale. © 2015 Gail Jessen 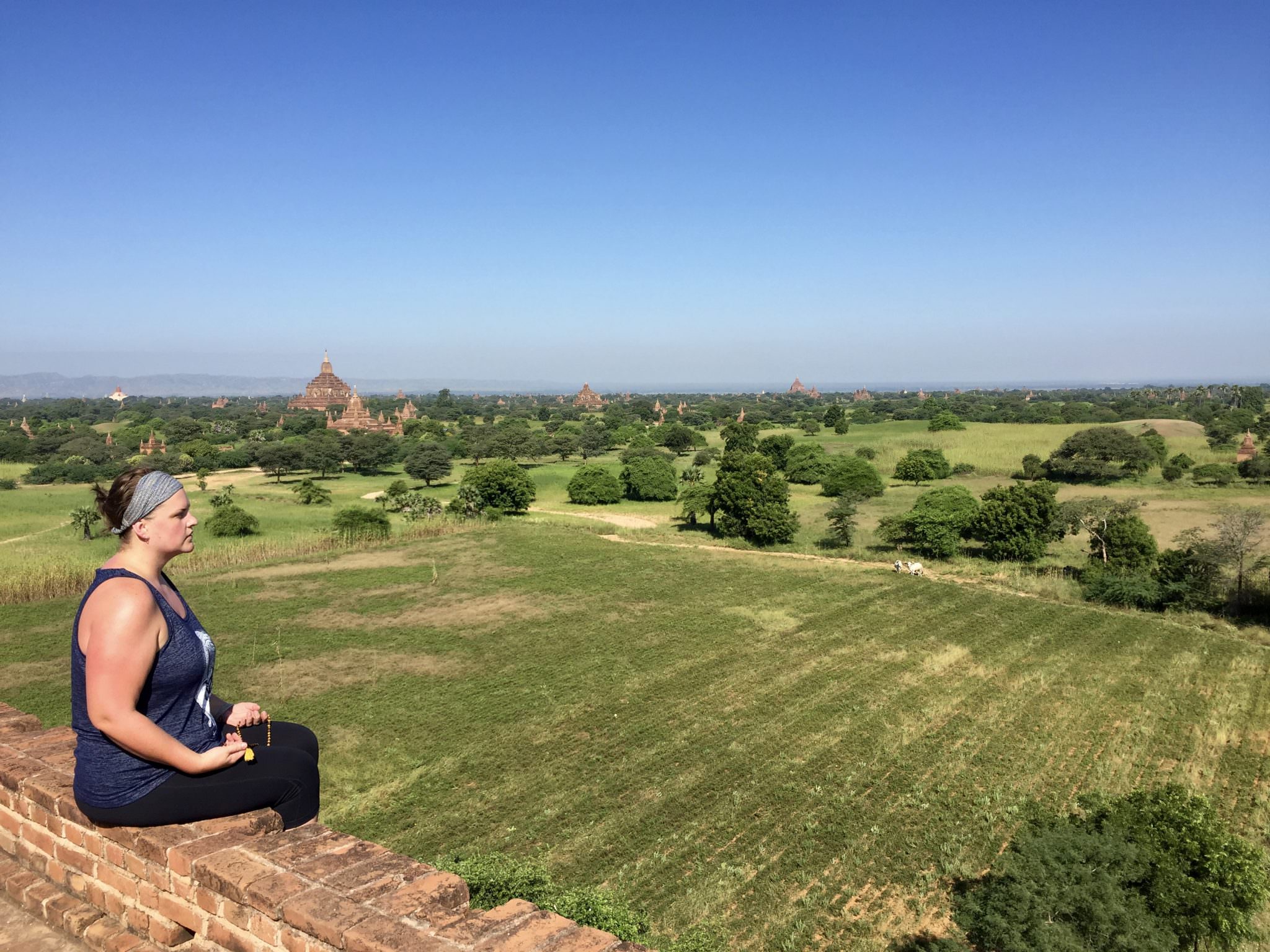 I took my time getting up, namely because I stopped to take photos every three seconds, but I didn’t find the climb to be difficult. It was high and it was steep, but it wasn’t anything that could keep me from this view! © 2015 Heather Bush

Once we safely made our way down, we visited the Ananda Phya. In sanskrit, Ananda means “bliss” and phya means ” temple.” Ananda is known for it’s 30-foot Buddhas. In an alcove carved into each of the four corners of the temple (N, S, E, W) stands a giant Buddha (covered in gold leaf, of course) surrounded by altars, cash offerings, and a handful of pilgrims. King Kyanzittha commissioned the temple at the end of the 11th Century. Legend has it he killed the architect and the architect’s son when the building was complete. A slightly more gruesome version says they were both buried alive inside the temple to remain guardians of the sacred space for time and eternity. Either way, he guaranteed no temple in the world would ever replicate his creation. 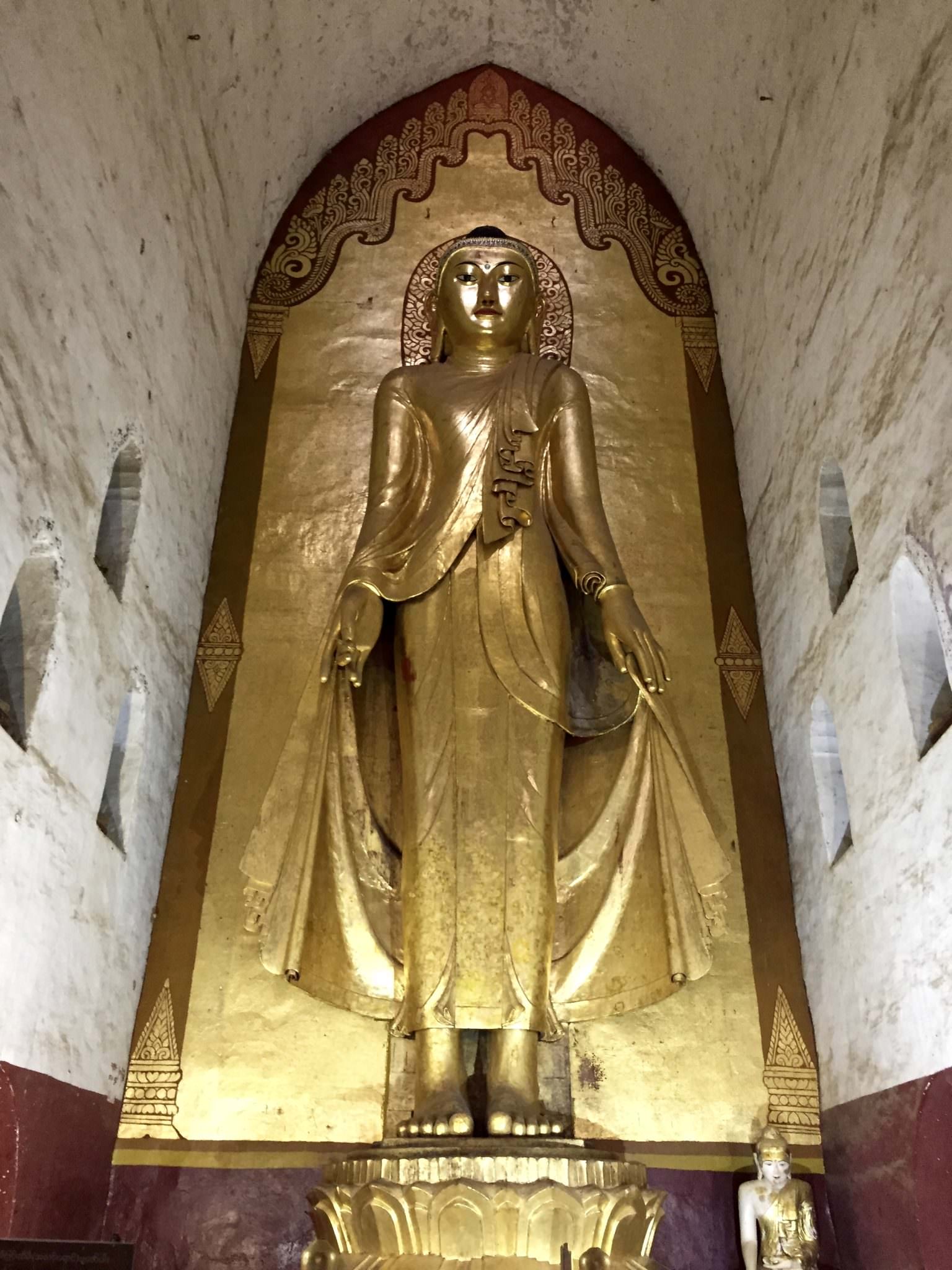 The Konagamana Buddha, facing East. See the little niches carved into the stone? There are Buddha statues tucked in there as well. there are thousands of niches carved in the walls with statues, actually, all throughout the temple. © 2015 Gail Jessen 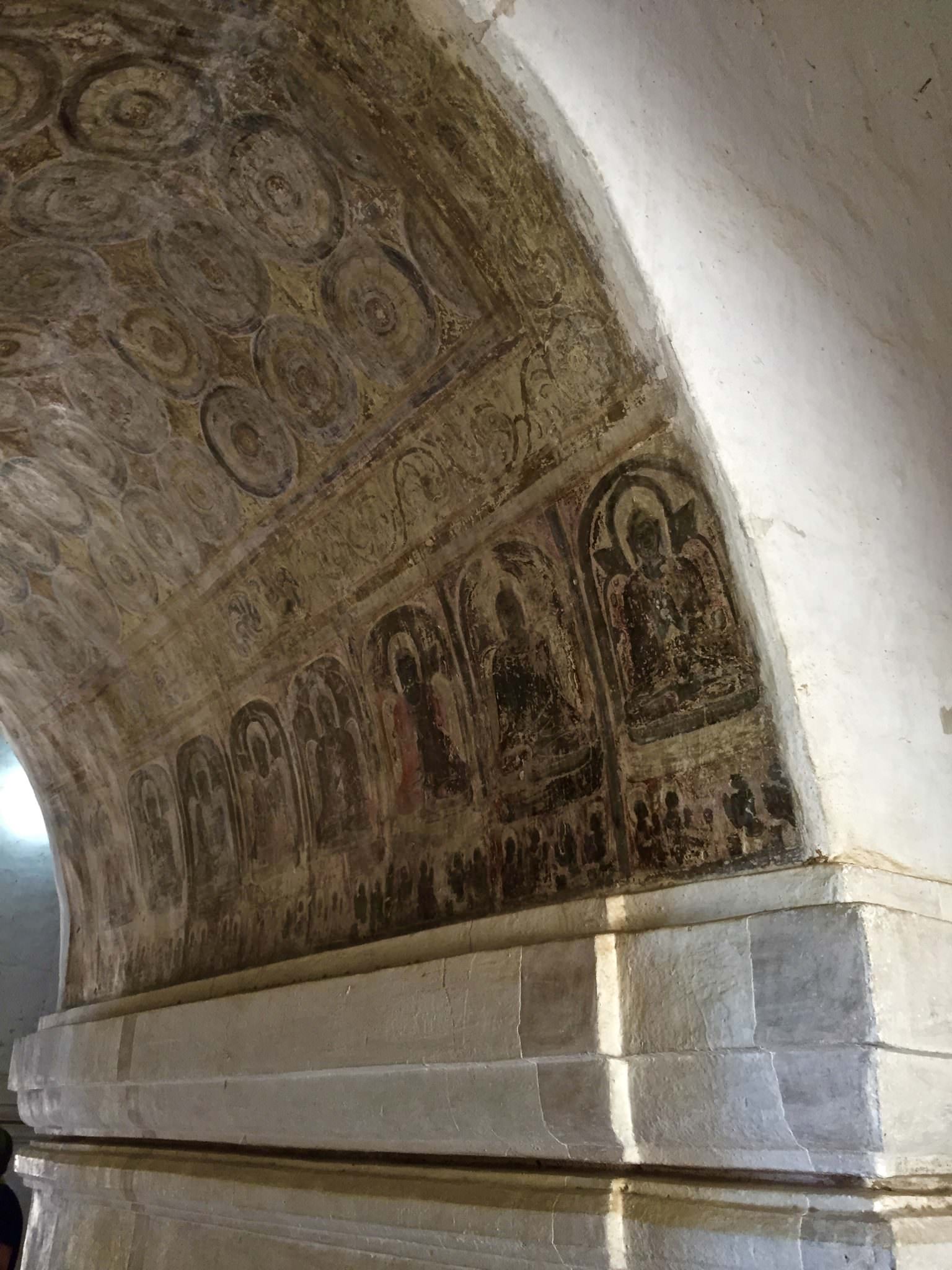 In a restoration process a few years back, frescoes were revealed in many of the small passageways around the temple. © 2015 Gail Jessen 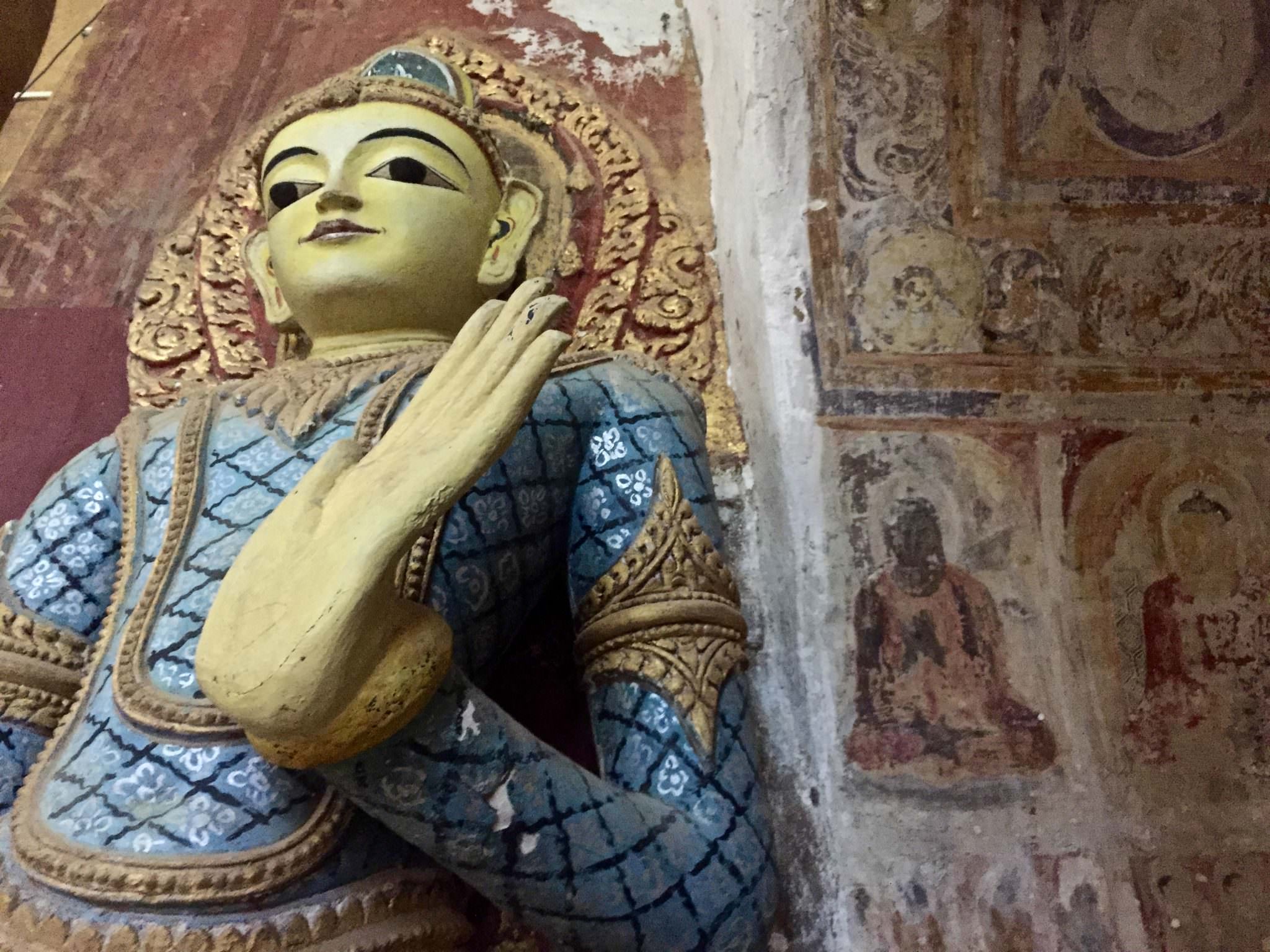 Details of the Ananda Phya in Bagan. The mudra of this Buddha’s hand is one that blocks the energy of negative spirits. © 2015 Gail Jessen 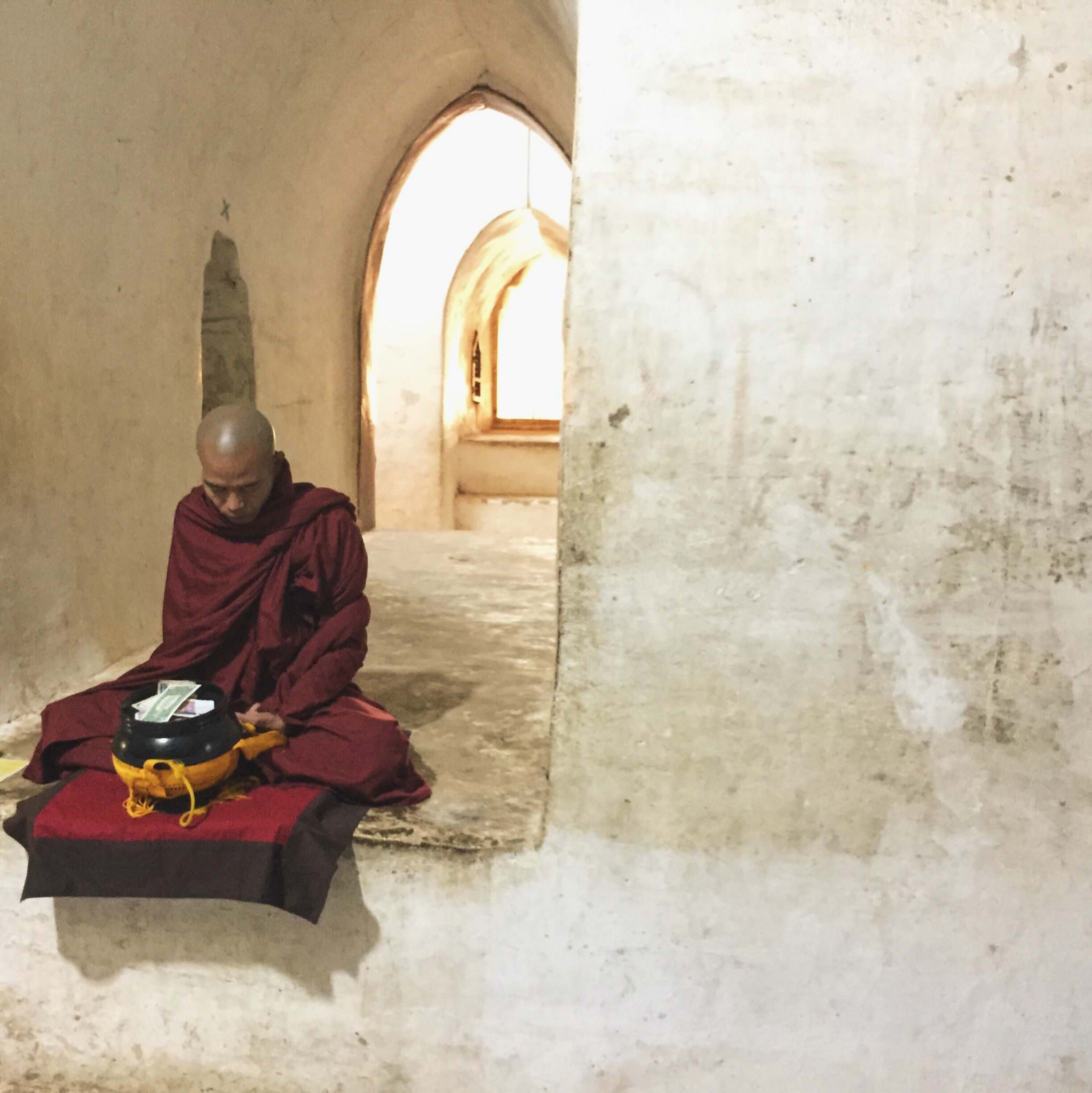 A Buddhist monk prays inside the hallways of the temple, accepting offerings of money and food. © 2015 Gail Jessen 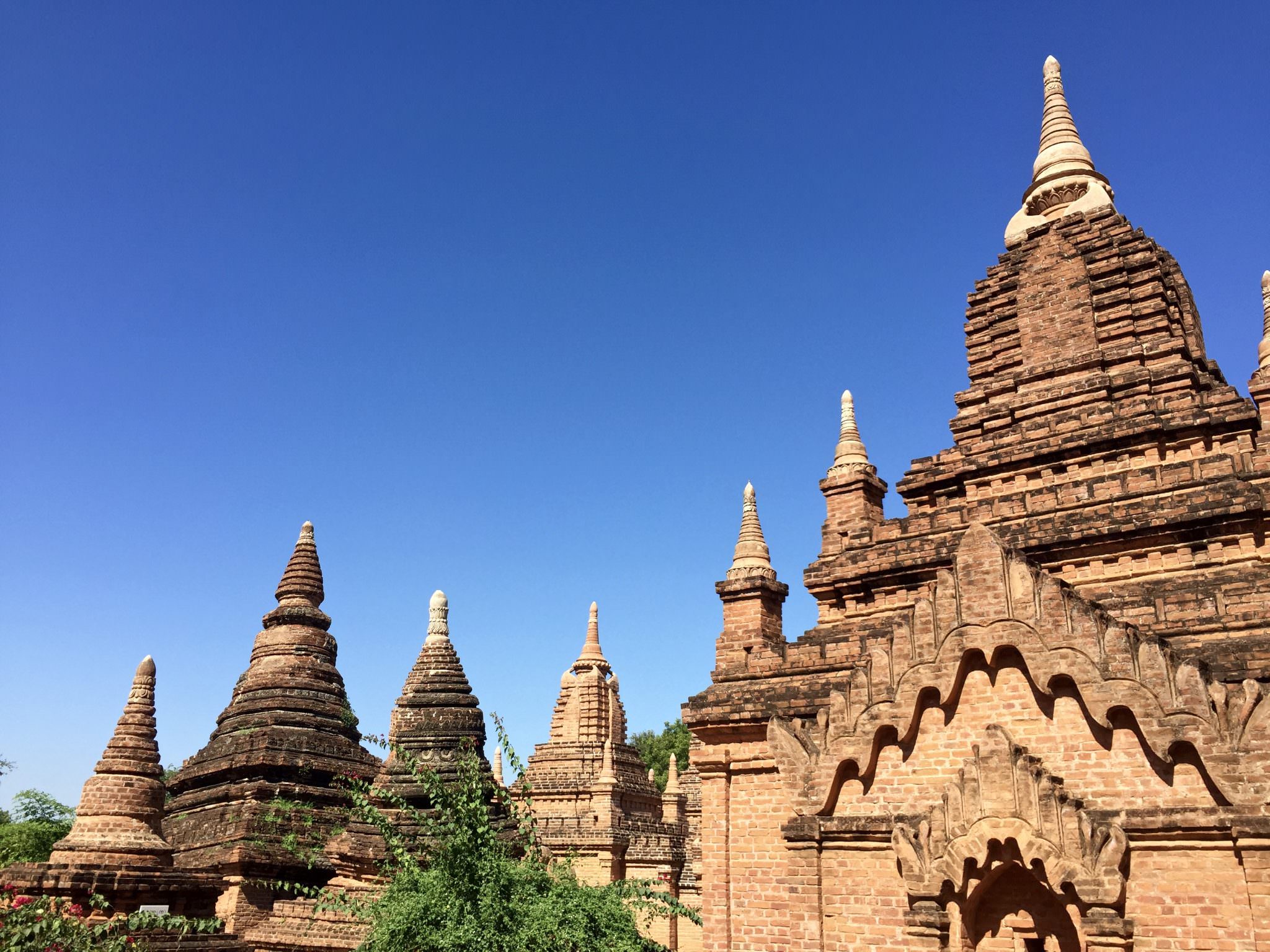 Not gonna lie, I felt like Indiana Jones wandering through fields of stone stupas. © 2015 Gail Jessen

I will remember this sight for the rest of my life. It must be experienced in person. © 2015 Gail Jessen

Just when you think you’ve surely seen the last stupa, you pop over the next hill or round the next bend in the dirt trail. © 2015 Gail Jessen

We visited a lacquerware workshop to learn about the process of bamboo-based bowls, jewelry, furniture, anything you can think of. There are no shortage of children selling ‘lacquerware’ pieces outside the door of your bus at every stop, however, know that they are fake. They are simply constructed of paper inside the lacquer. Real lacquerware is made from 30 different types of bamboo. No nails. No glue. Only interlocking pieces. Whatever the piece is that being constructed, be it a tea cup or a dining room table, after each step in the process it must rest in a dry cellar. The length of time it takes to complete even a simple piece of jewelry is staggering. The bracelet I purchased, for example, took seven months to get to the point that it could be painted. It was another two months of scratching away the back lacquer so that designs could be filled with colorful paint. Call it a year from start to finish and that’s just a small piece of jewelry. I paid $15 USD. 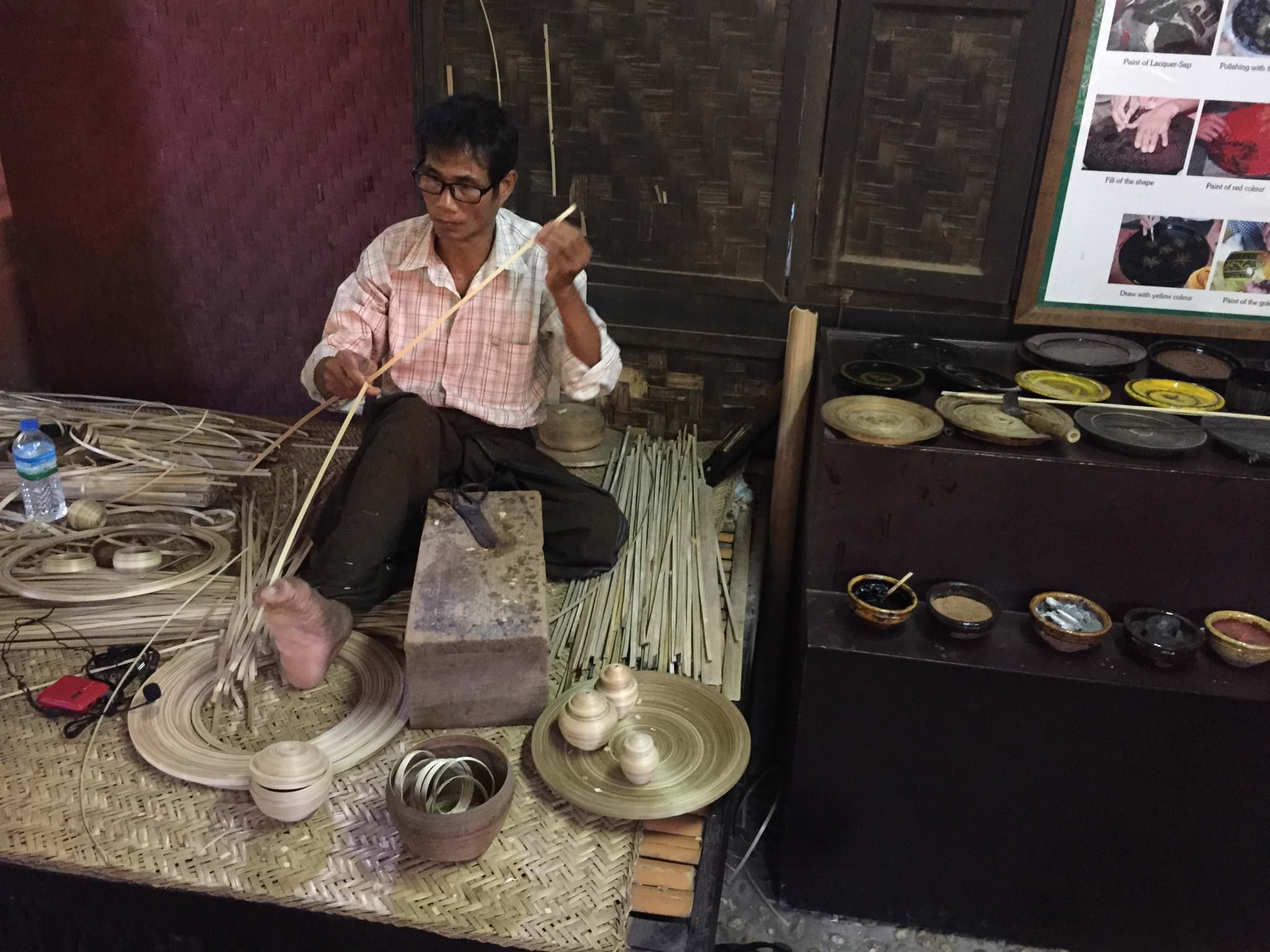 The artisan separates bamboo with his toes, pulling thinner and thinner strips apart in preparation for a bracelet. © 2015 Gail Jessen 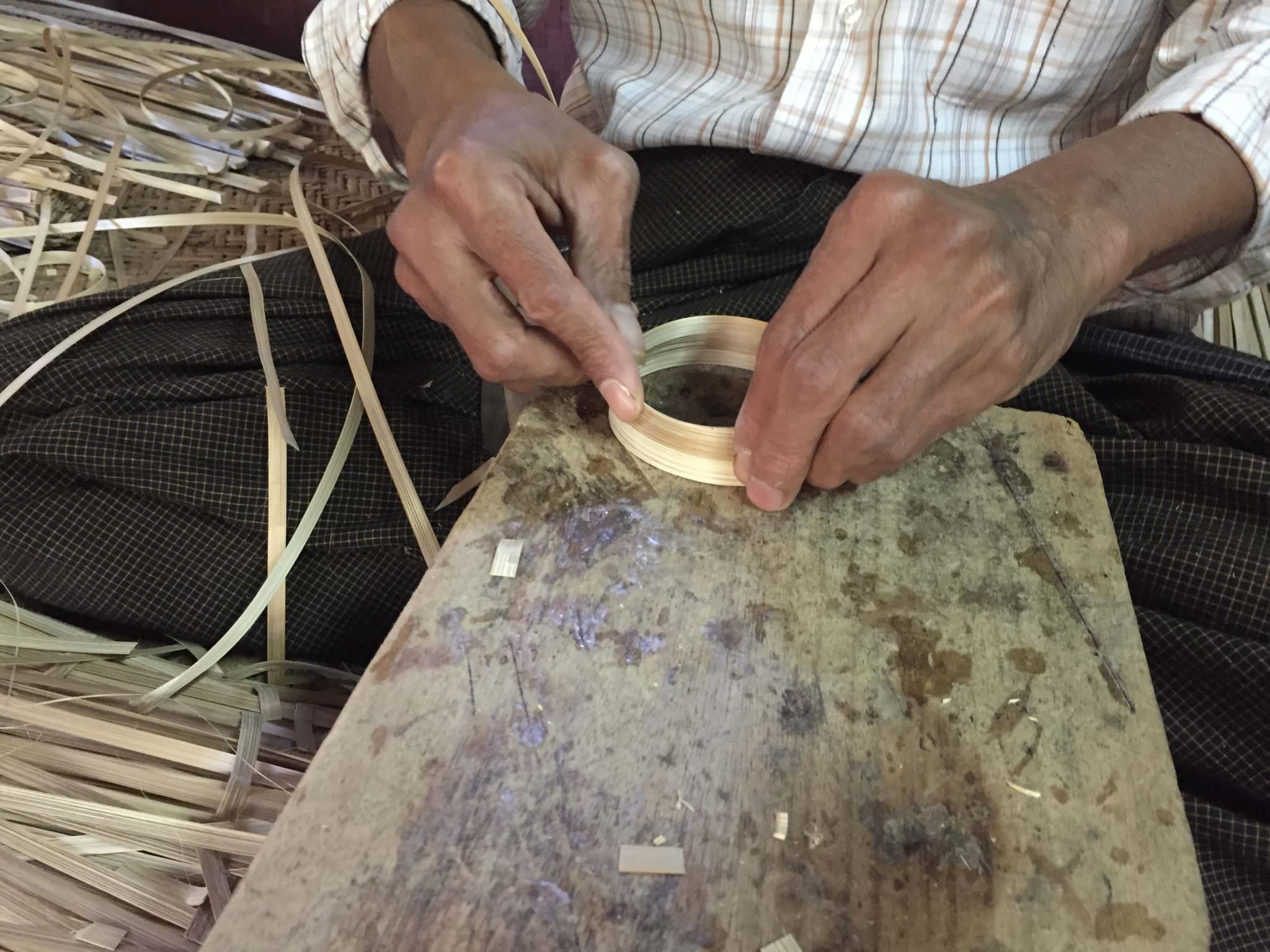 He cuts notches into the ends of bamboo strands, interlocking them and forming a bracelet with no nails or glue. He gifted me the raw bamboo bracelet he was working on. Very sweet. © 2015 Gail Jessen 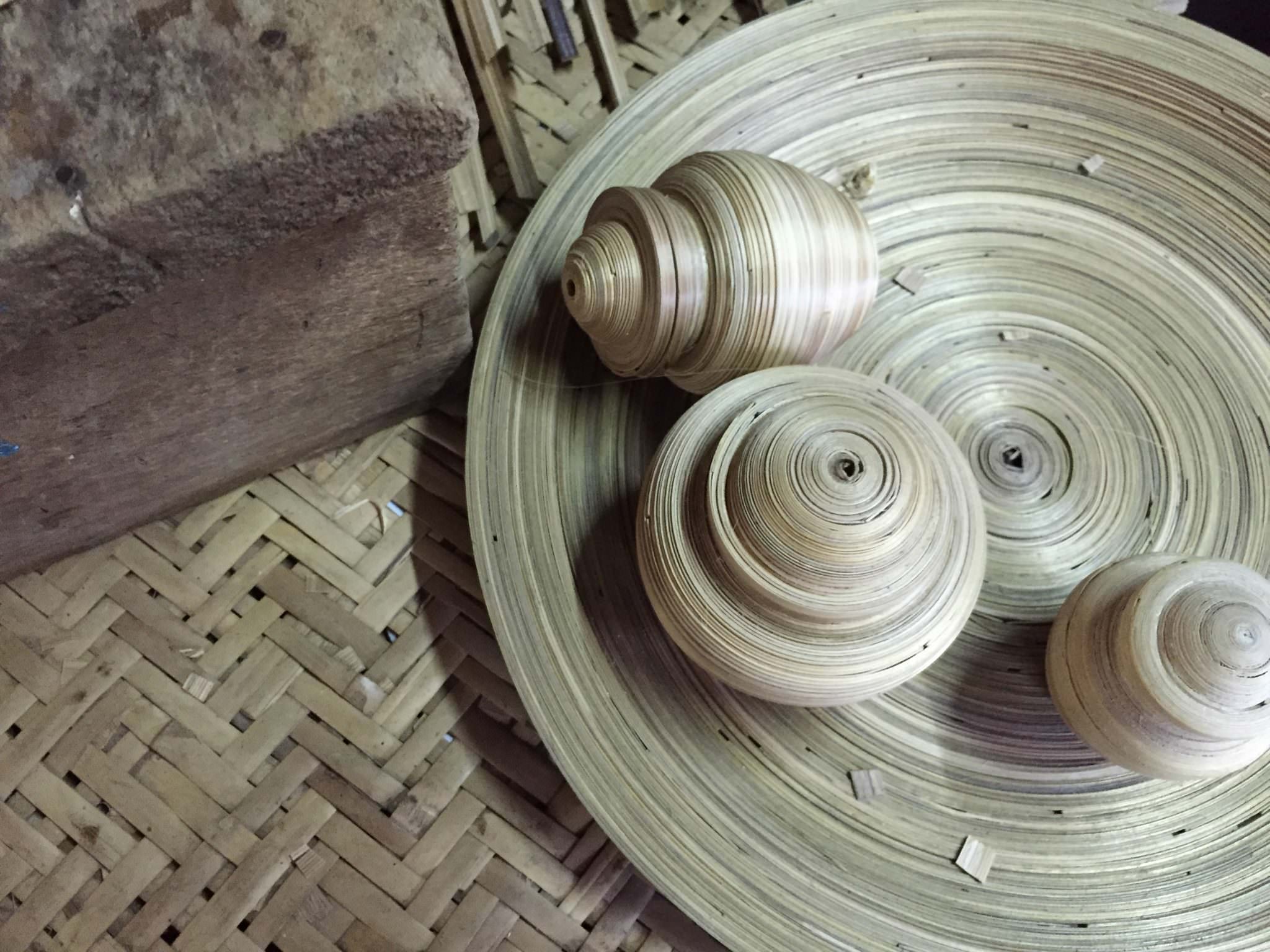 I personally think the raw bamboo is beautiful on it’s own. © 2015 Gail Jessen 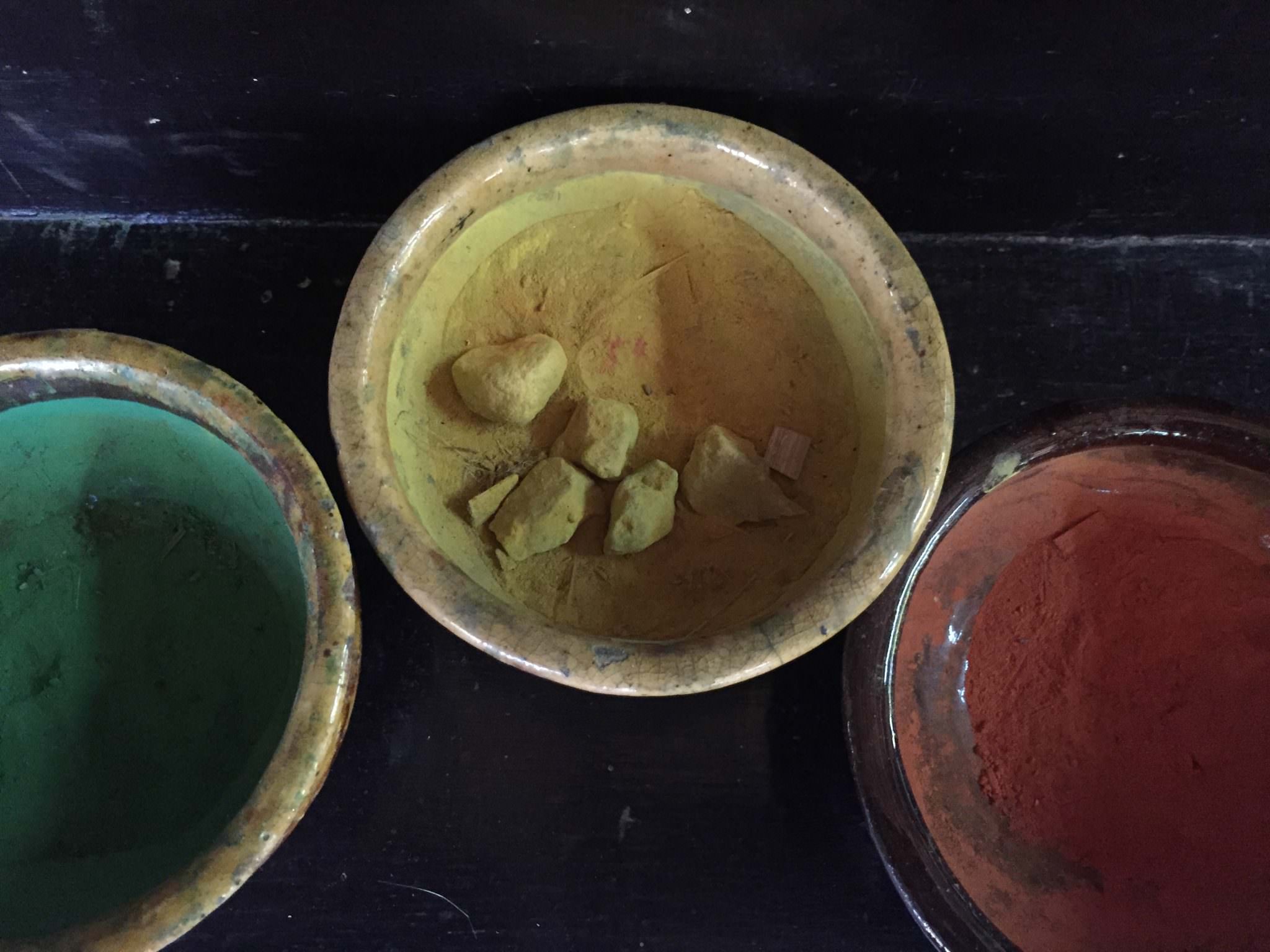 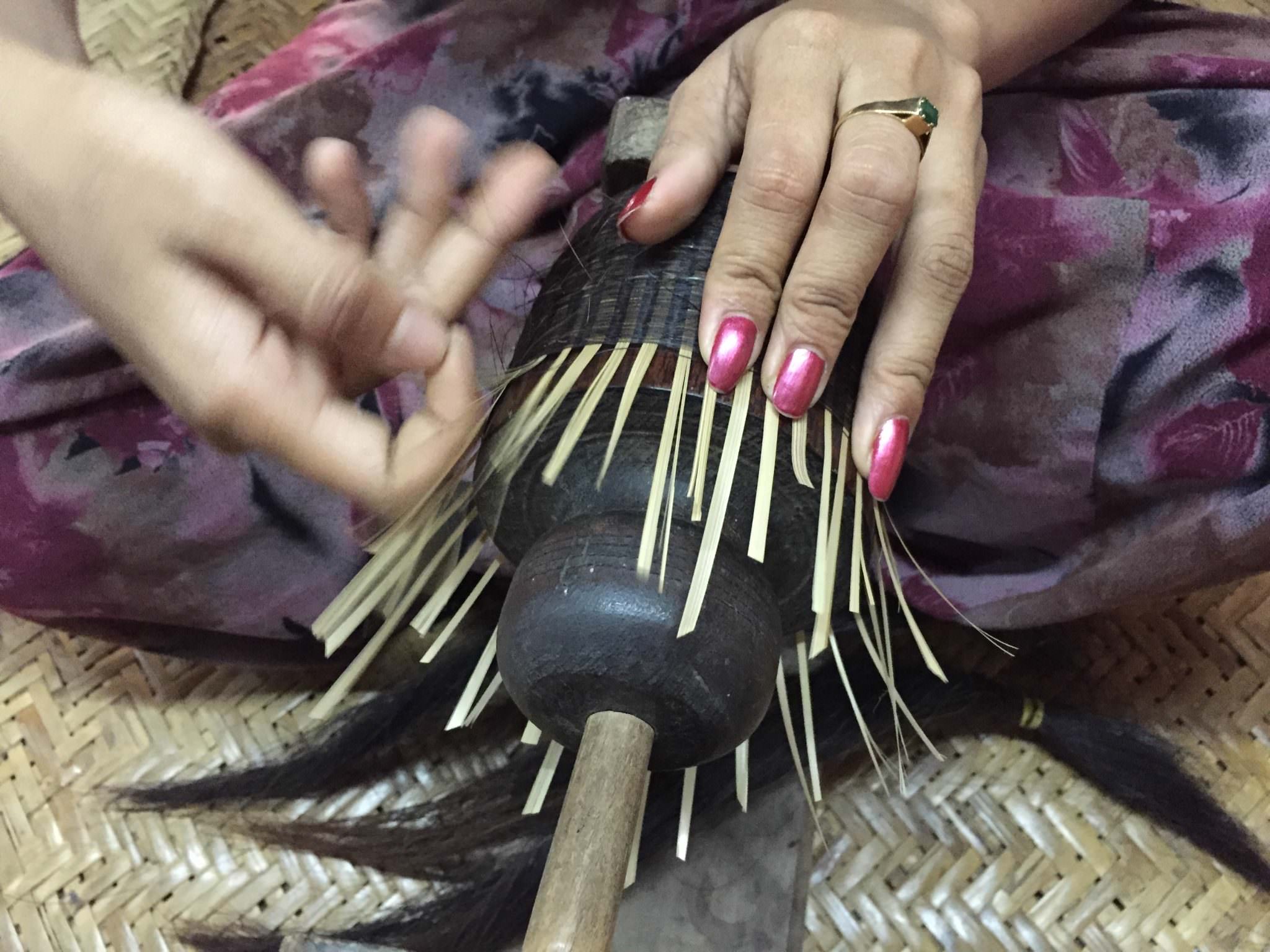 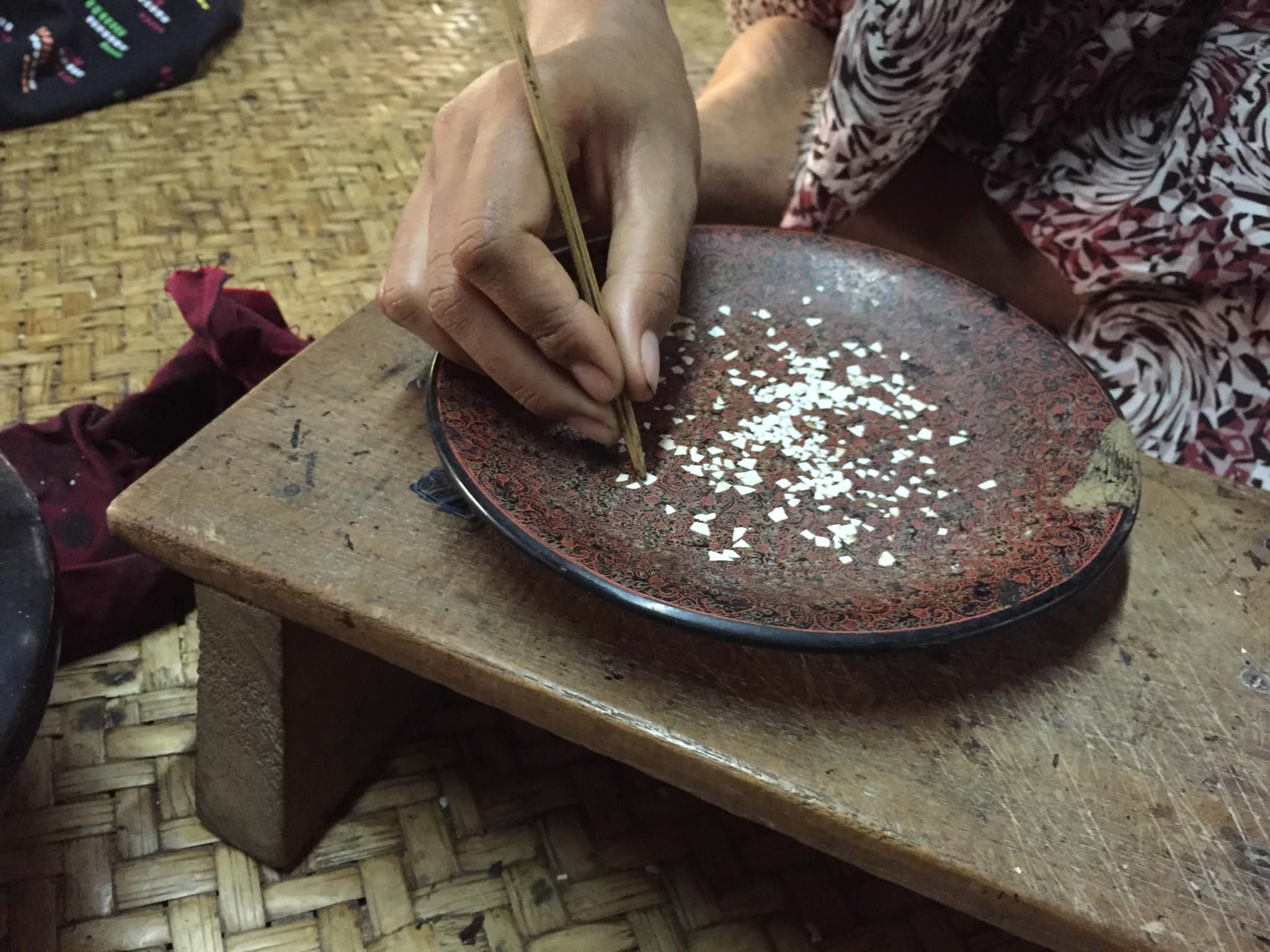 Egg shells are smashed and applied one tiny broken piece at at time on a large bowl, covering the entire surface. © 2015 Gail Jessen 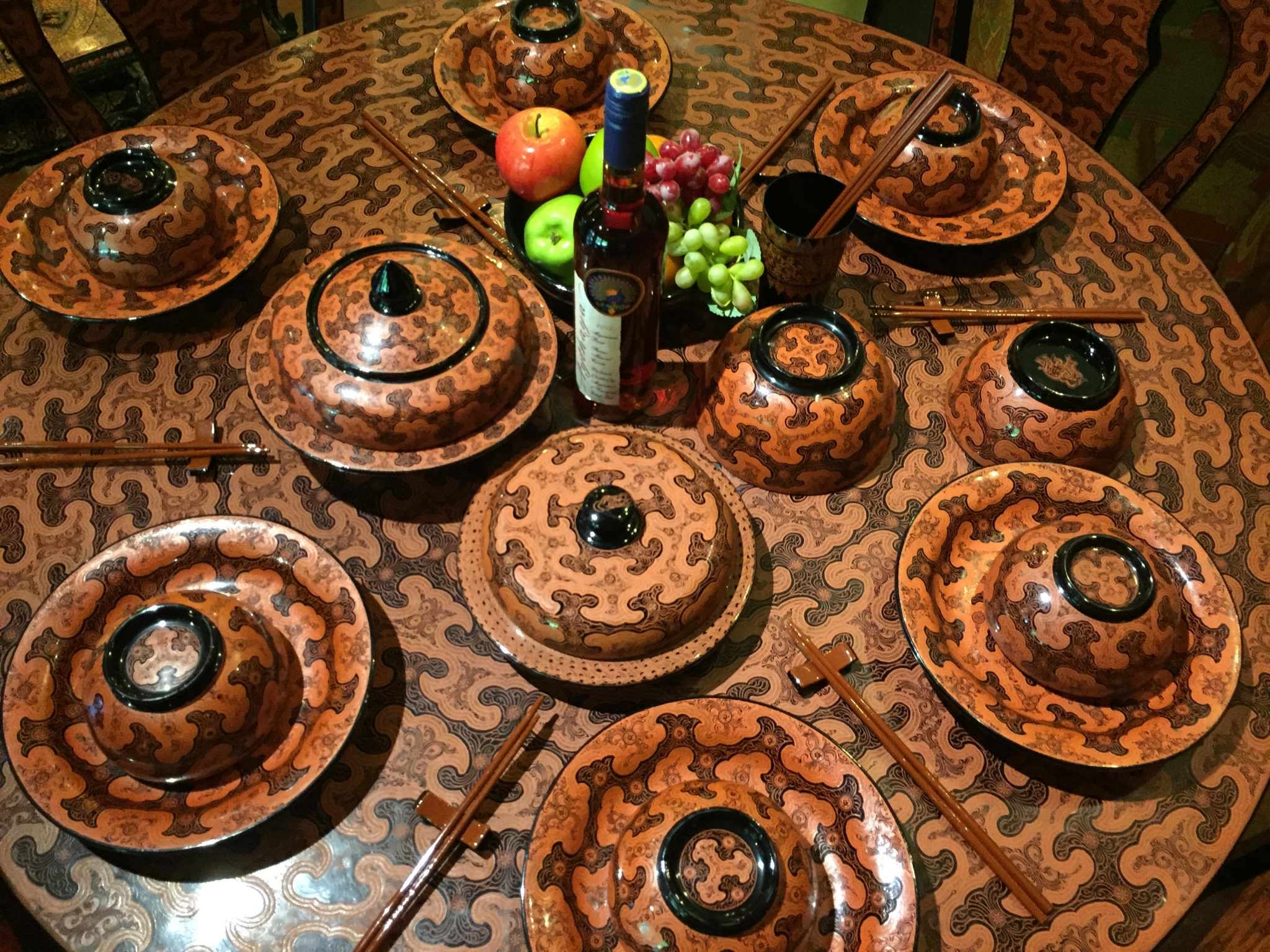 To cap off our day, we drove back into the thick of the stupas and right up to the Shwesandaw Pagoda. Known for its perfect sunsets (and massive crowds), the Shewsandaw is a five-tiered temple with one side facing squarely west. At some point Burmese authorities realized that thousands of unsupervised people were climbing all over the pagoda  every night, trying to take selfies and time-lapse GoPro shots from every ledge, and so they added railings to the very steep stairs. Even so, it was an intense climb. It certainly made our morning jaunt on Phya That Gyi feel like child’s  play. 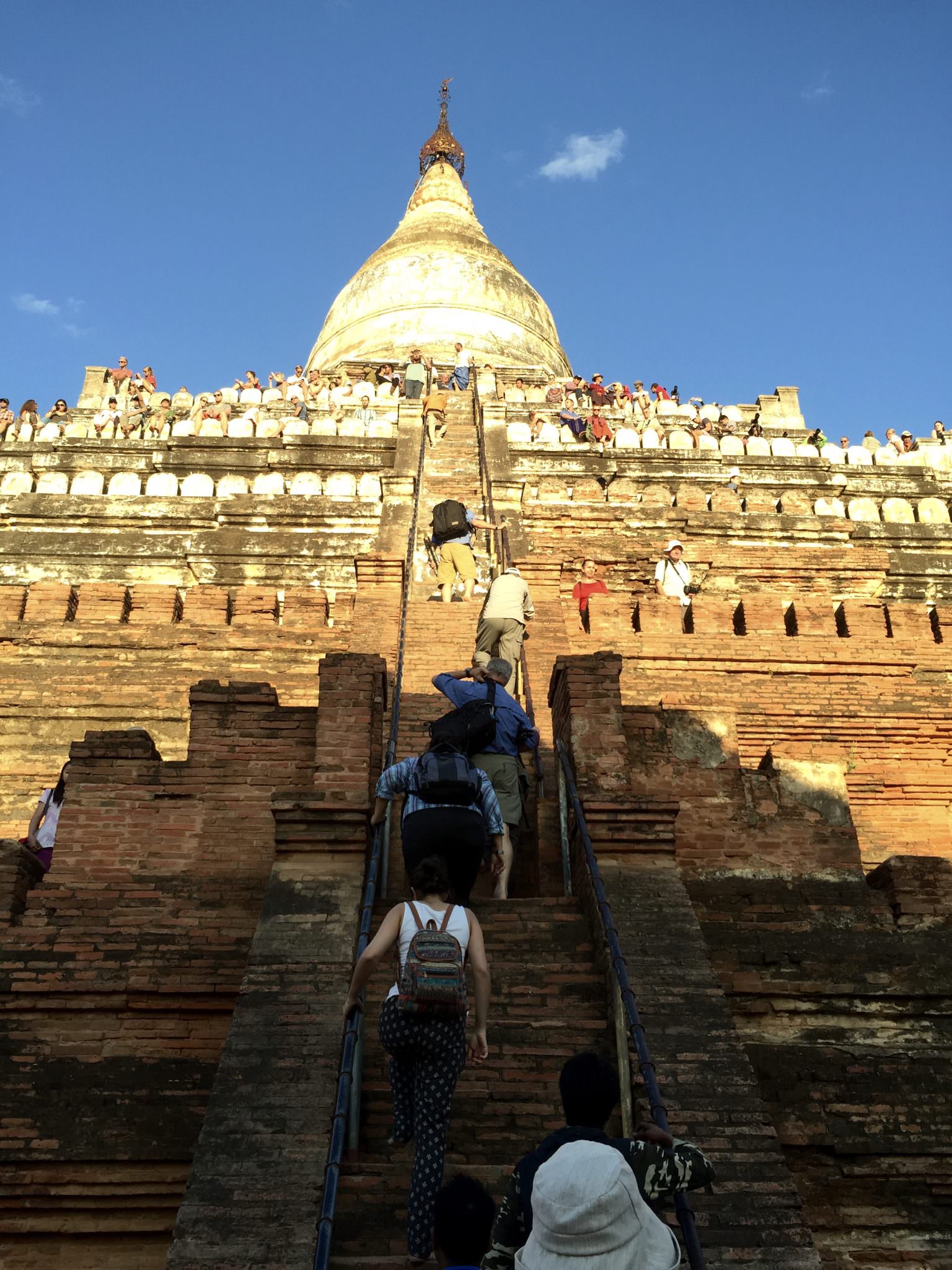 Each step is about two feet high and there are five levels to climb if you want the premier view from the tip top. © 2015 Gail Jessen 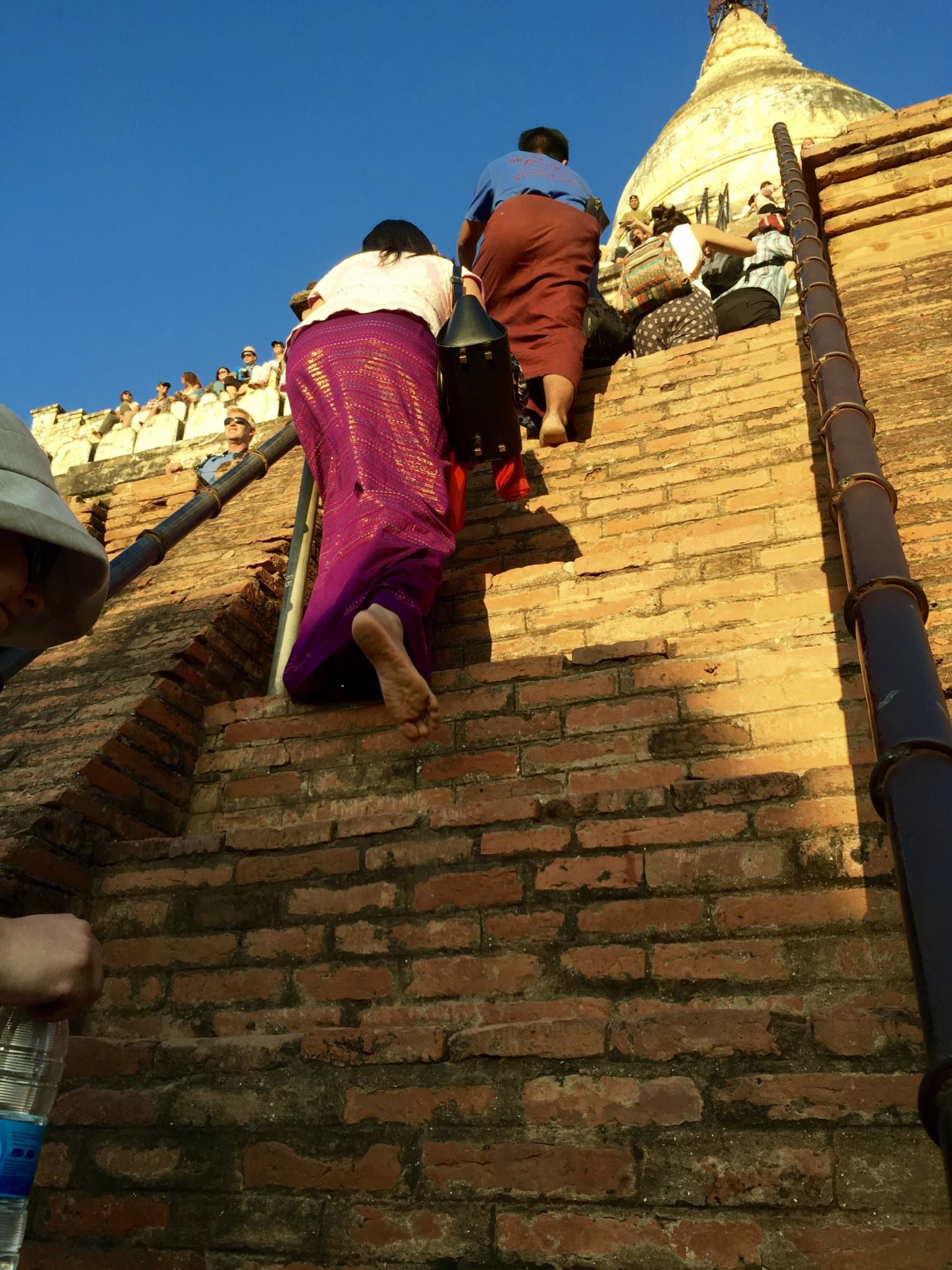 I can’t imagine doing this climb in a longhi. I was in capri yoga pants and I barely made it without a face plant or two. Oh, and like everything in Myanmar, you must be barefoot. © 2015 Gail Jessen 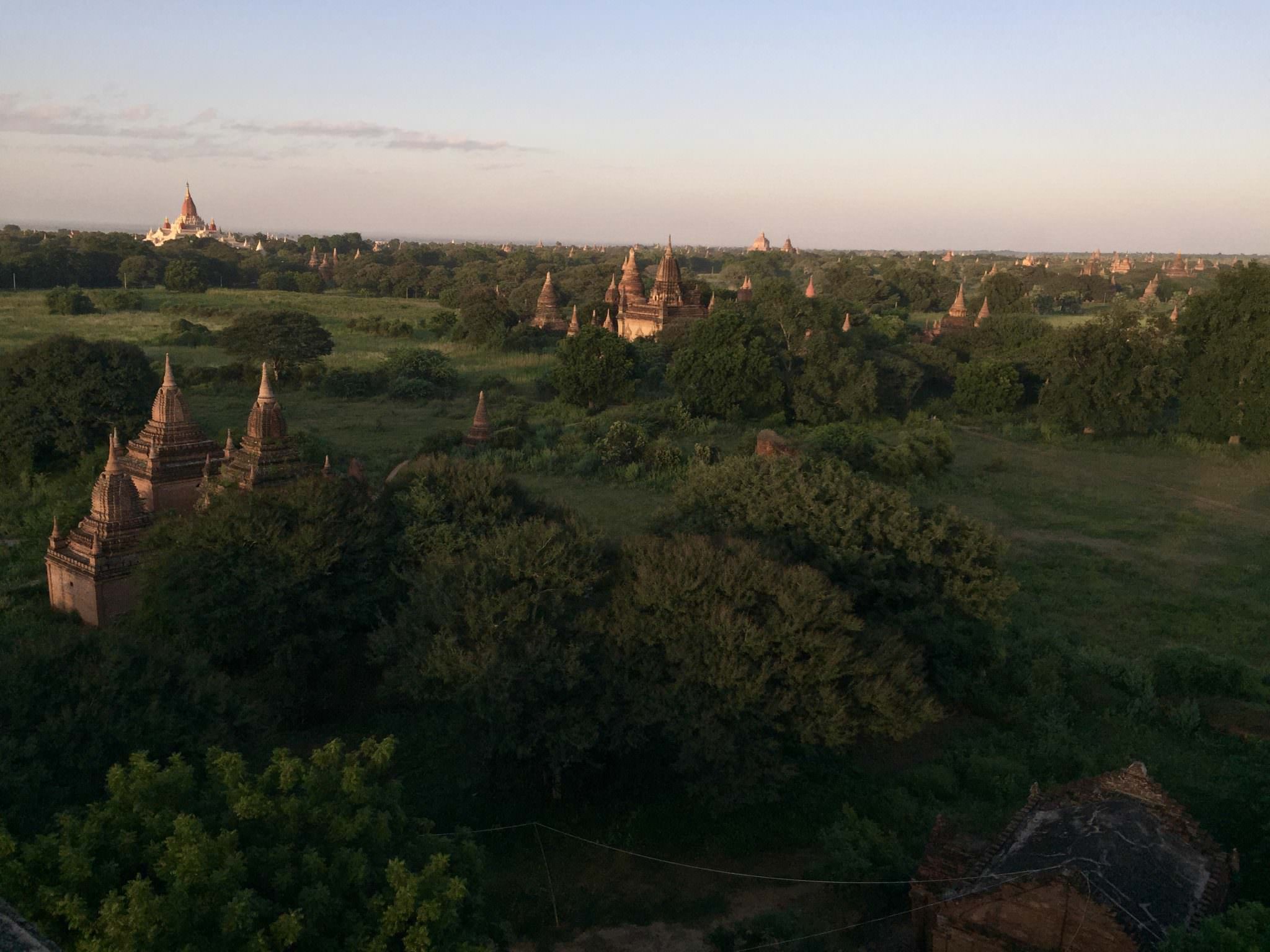 I wouldn’t suggest tackling this if you are at all afraid of heights or claustrophobic. By the time the sun started dipping, every inch of the pagoda was crawling with people stacked five layers deep. Many people were shoving and pushing to get a good photo. That behavior is ludicrous to me because the pitch of the stairs is so steep. You wouldn’t survive a fall of any height, lets put it that way. If you decide to make the climb, be prepared to stand up for yourself and, per se, tell the woman next to you in a loud, firm voice: “No. Stop. No more pushing. That is dangerous. No.” You know, hypothetically. But again, totally worth it… 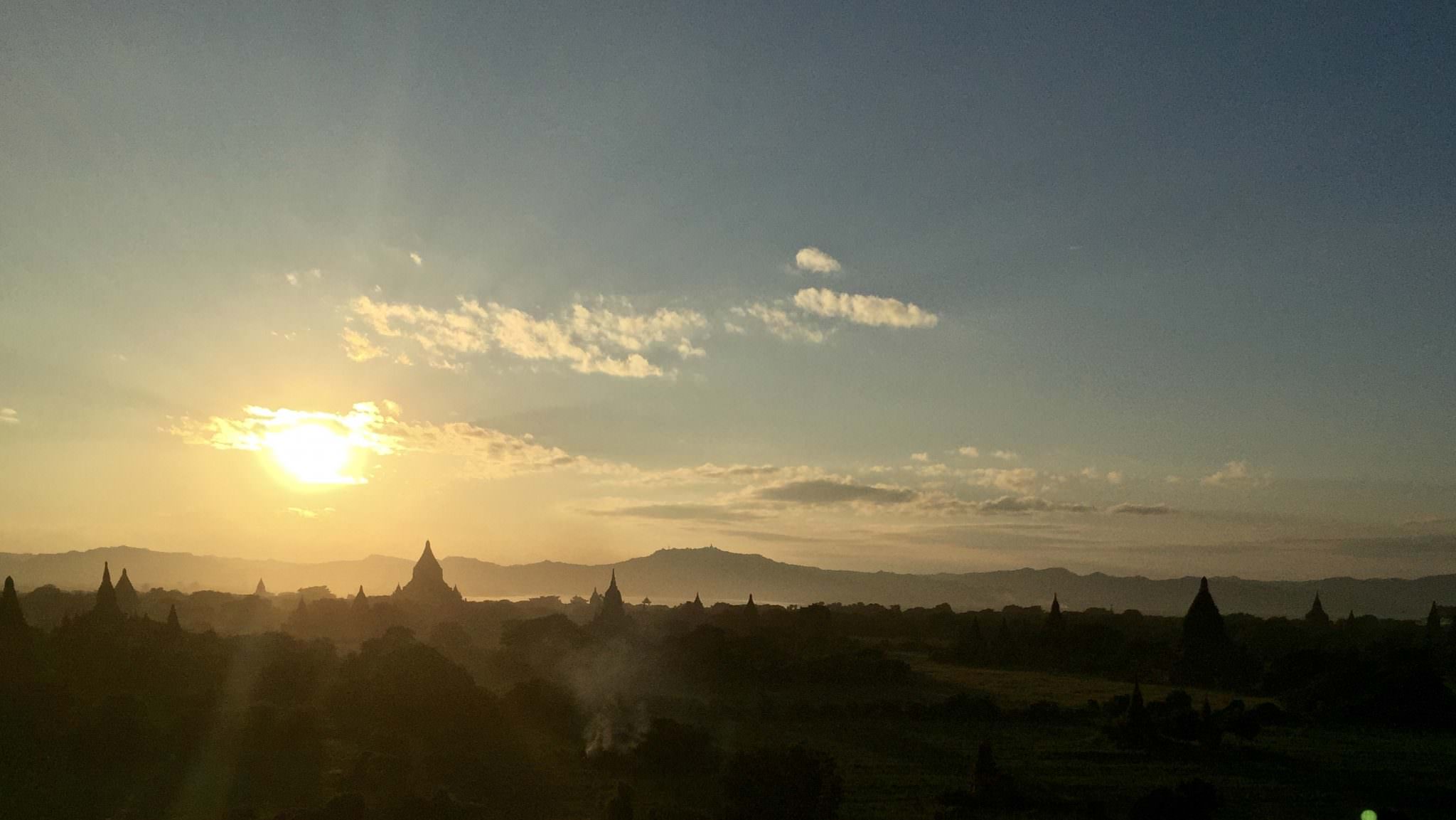 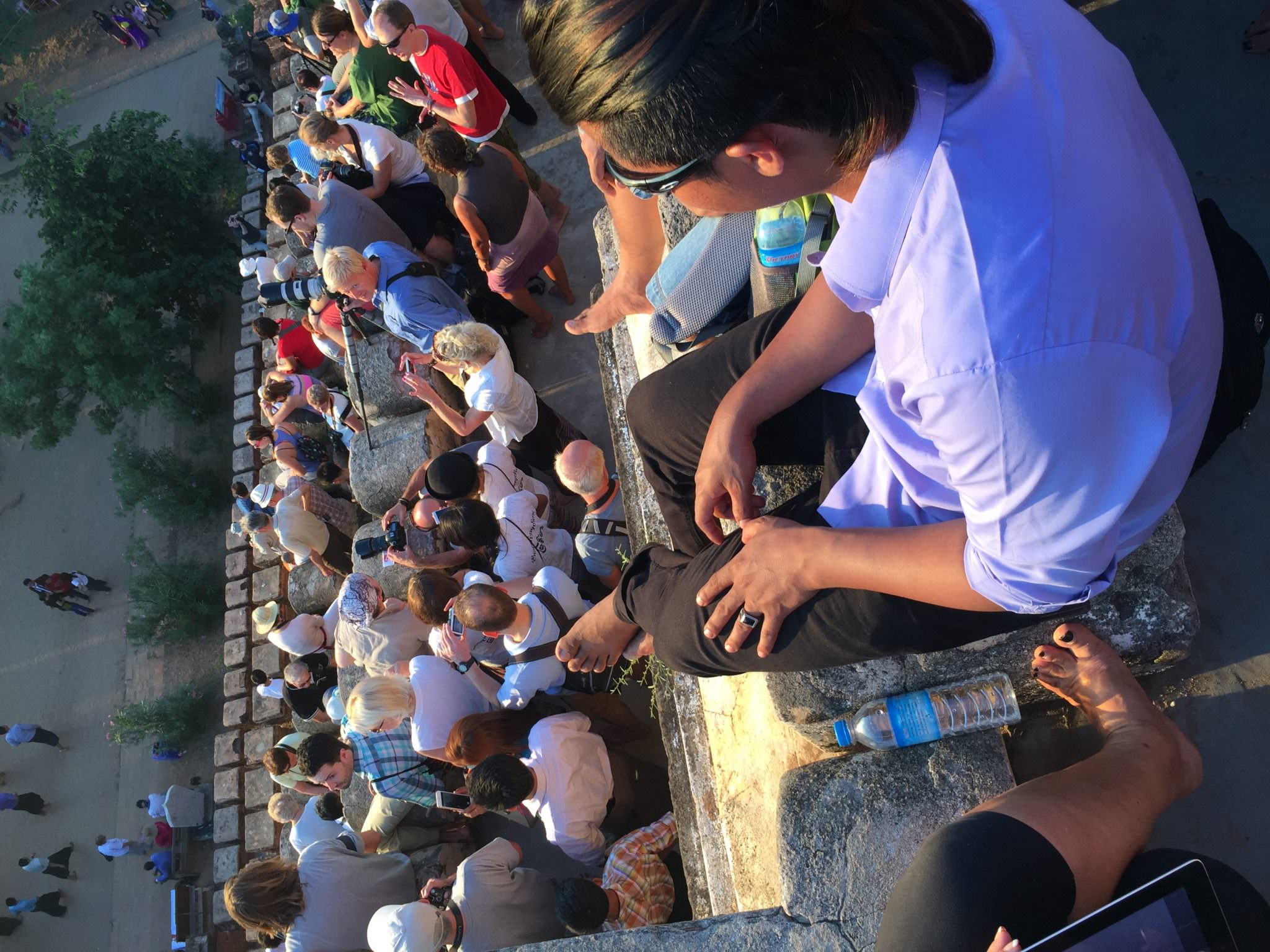 I actually enjoy heights and even I thought it was dizzying. © 2015 Gail Jessen 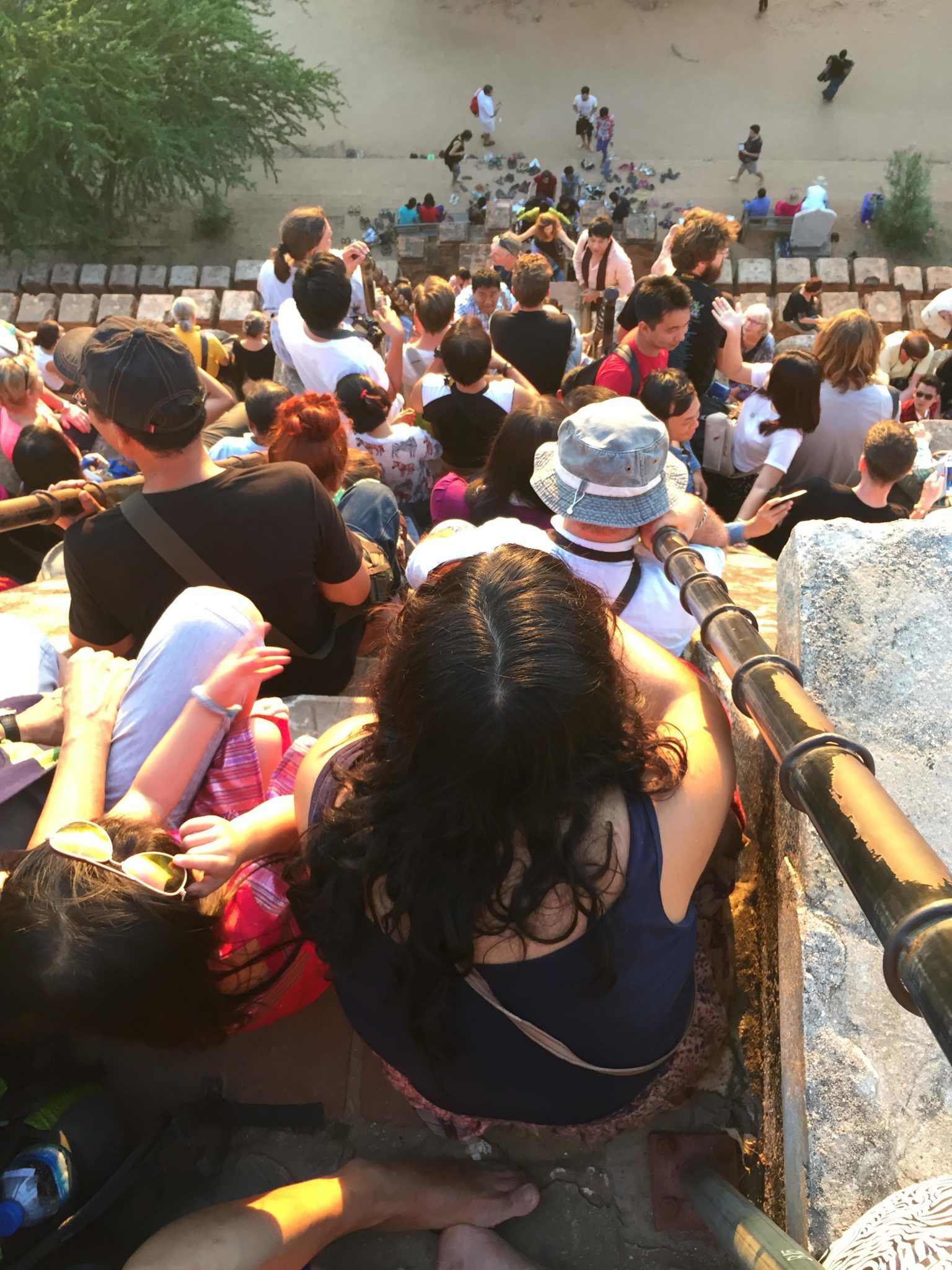 This is what I meant when I advised against claustrophobic travelers hiking to the top. Every stairway was packed with people, adding to your potential panicked feeling of being stuck on top. (Man, I’m really selling this). © 2015 Gail Jessen 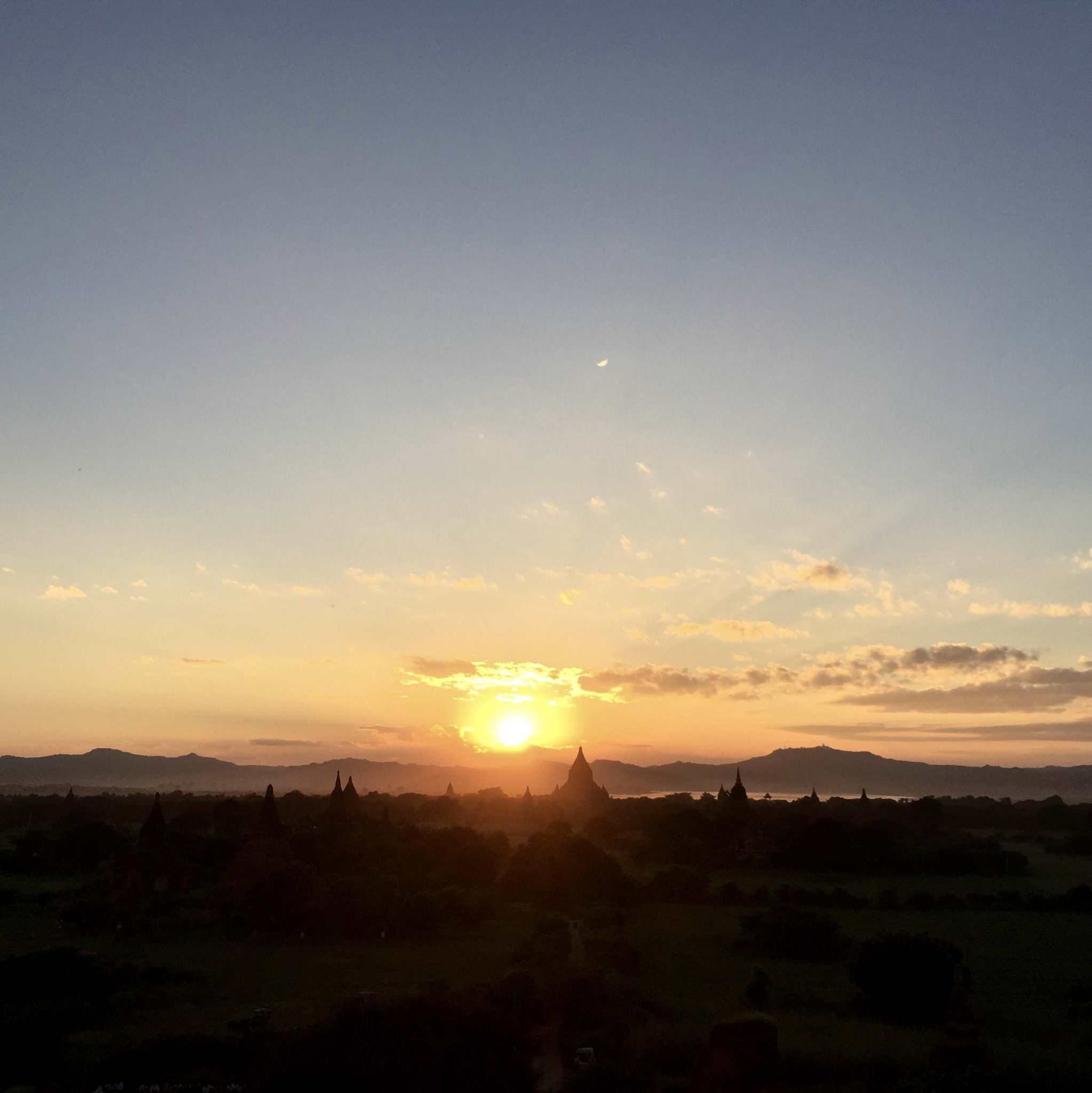 Our Voyage Report from Viking River Cruises’ Myanmar Explorer continues in the next article as we visit Yandabo, a village dedicated entirely to pottery making. Be sure to come back and keep reading. You’re also invited to follow along with adventurer Gail Jessen on Twitter or Instagram.