I wrote previously about my delay in meeting up with the Viking Myanmar Explorer itinerary – including 10 travel tips if you’re ever significantly delayed. A volcano erupted in Indonesia and completely closed the airport in Denpasar, Bali, where I’d spent the previous six weeks. At any rate, when I did finally reach Viking, it was after a flight to Yangon, Myanmar. I missed one transfer and one tour day in Bangkok, Thailand and also one transfer and one tour day in Yangon, Myanmar.

I’ve traveled with Viking River Cruises before and knew that once I could put myself in their capable hands, I would have a stress-free, perfectly comfortable vacation. I was not disappointed. Program Director Nanda kept the hotel kitchen open for my 10pm arrival and also made arrangements for me to sneak away from the Sule Shangri-La Hotel before our morning airport transfer. He wanted to make sure I was able to visit Yangon’s premiere sight – the Shwedagon Pagoda. 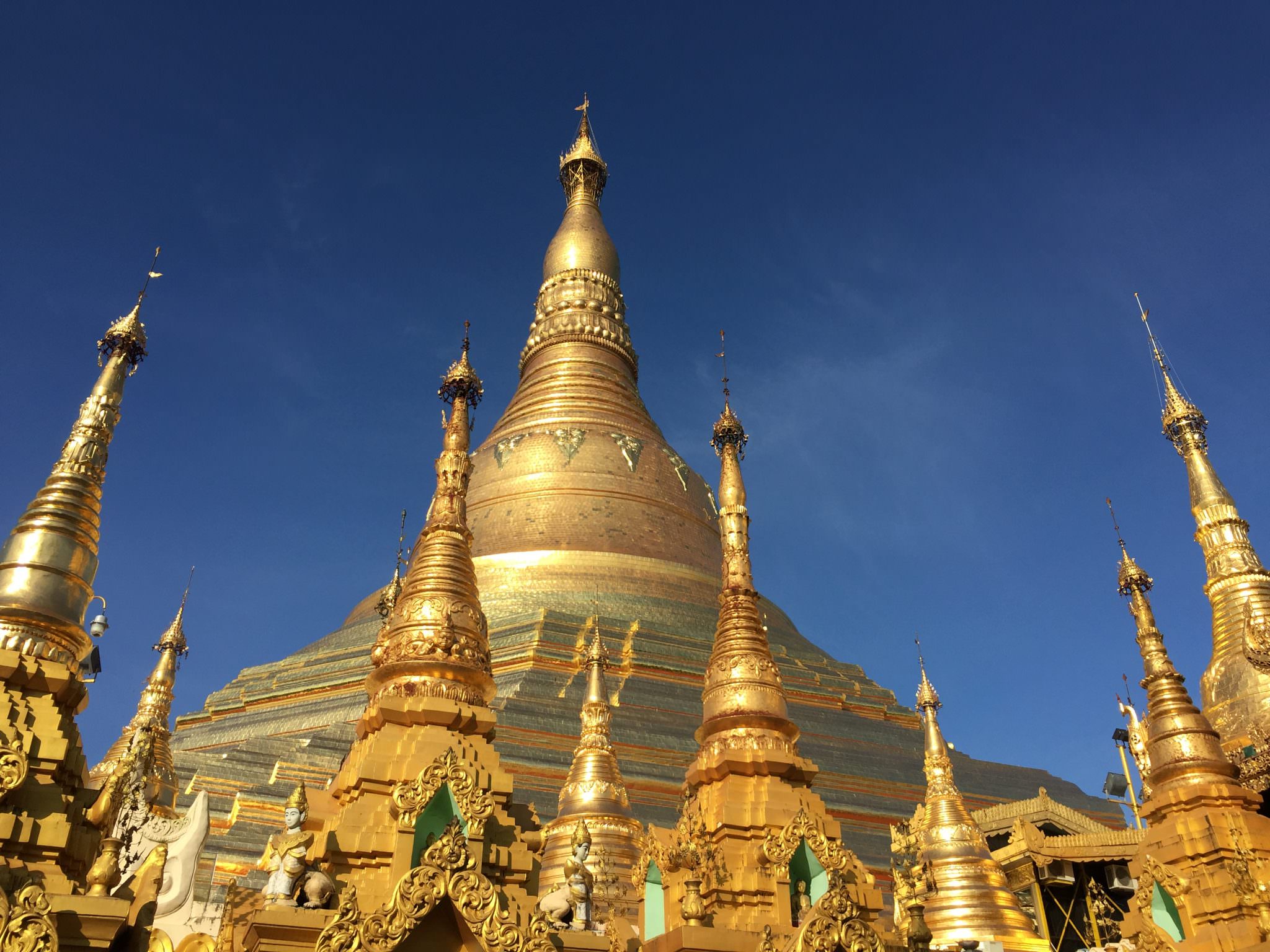 This was one of those travel moments that haunts you forever in the best possible way. My mind couldn’t wrap around the scale, the shapes, the gold leaf, the world so completely removed from anything I’d ever experienced in person. © 2015 Gail Jessen 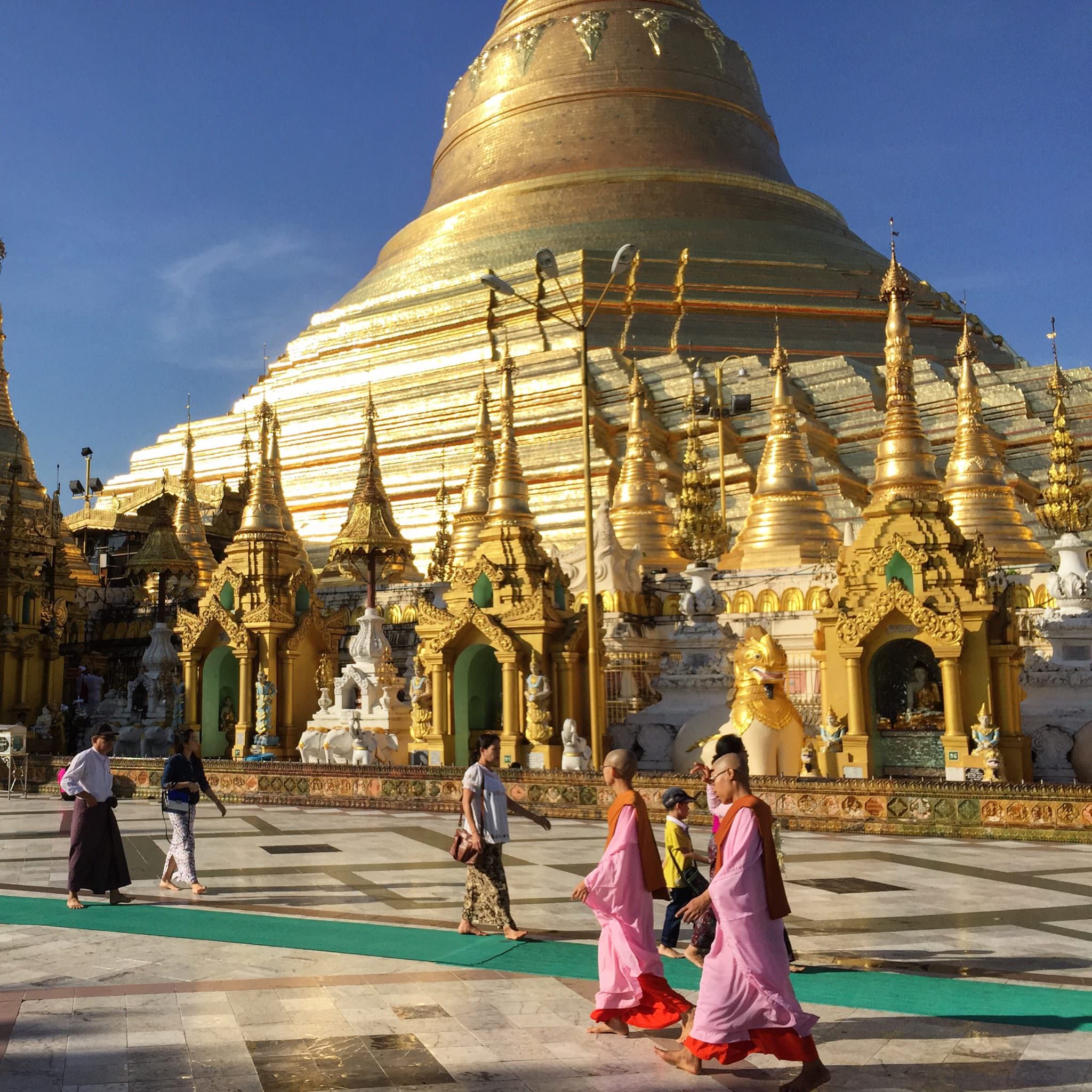 Burmese Buddhist men are required to become a monk at some point in their life (even if only for a week), as a right of passage. Burmese Buddhist women do not have that requirement. Men wear maroon colored robes, women where pink, as seen here. Both shave their head. © 2015 Gail Jessen

River Cruise Advisor’s Aaron Saunders is covering the logistics of this cruise itinerary, while I’m covering the cultural elements of our excursions in Myanmar. Therefore, suffice it to say in this article that the transfer of 29 people from the Yangon airport to Heho Airport (Inle Lake gateway) was flawlessly organized and executed. On the way to our lodging at Aureum Palace on the lake, we stopped at the  Shwe Pan Khing paper making workshop. 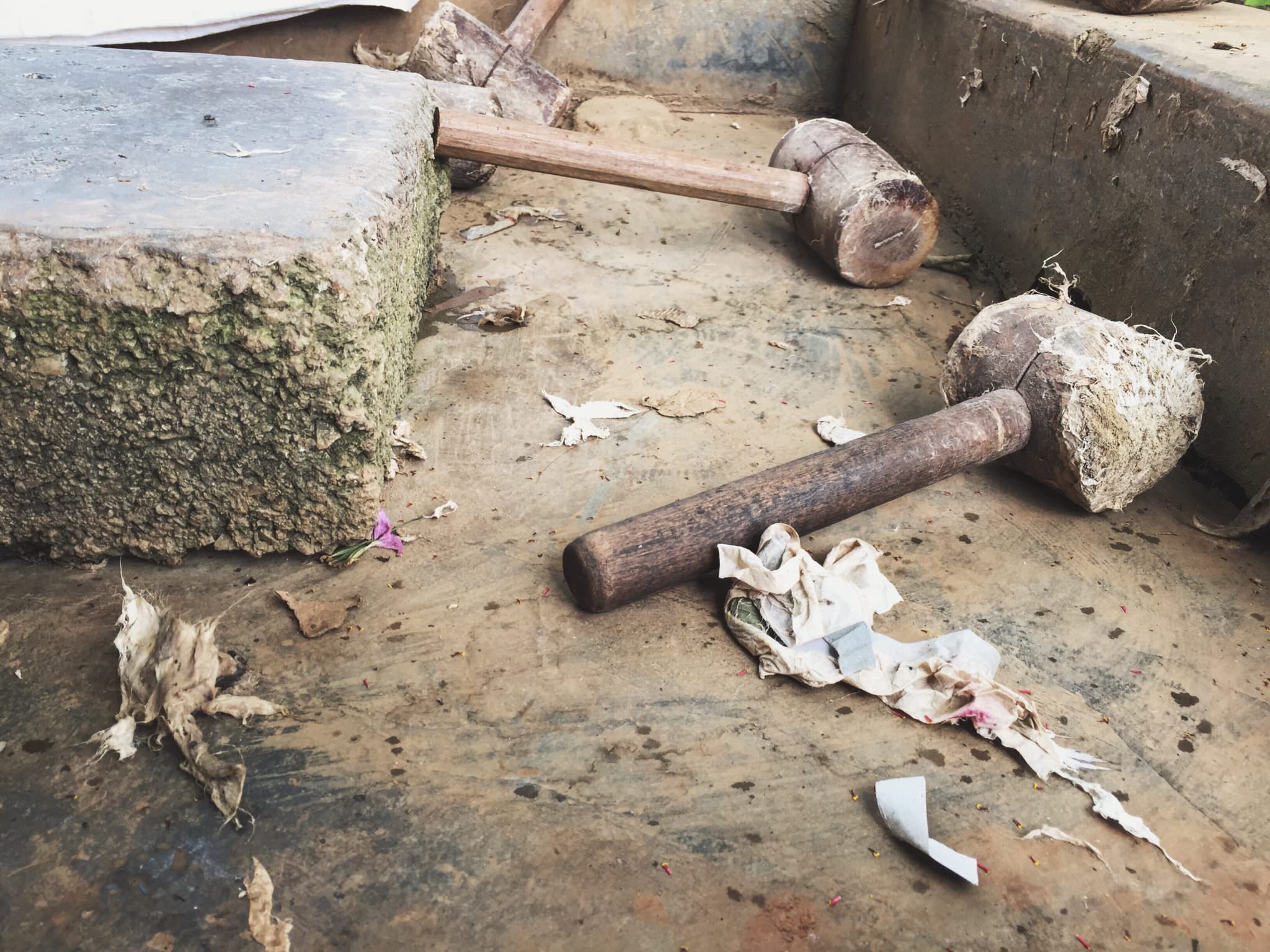 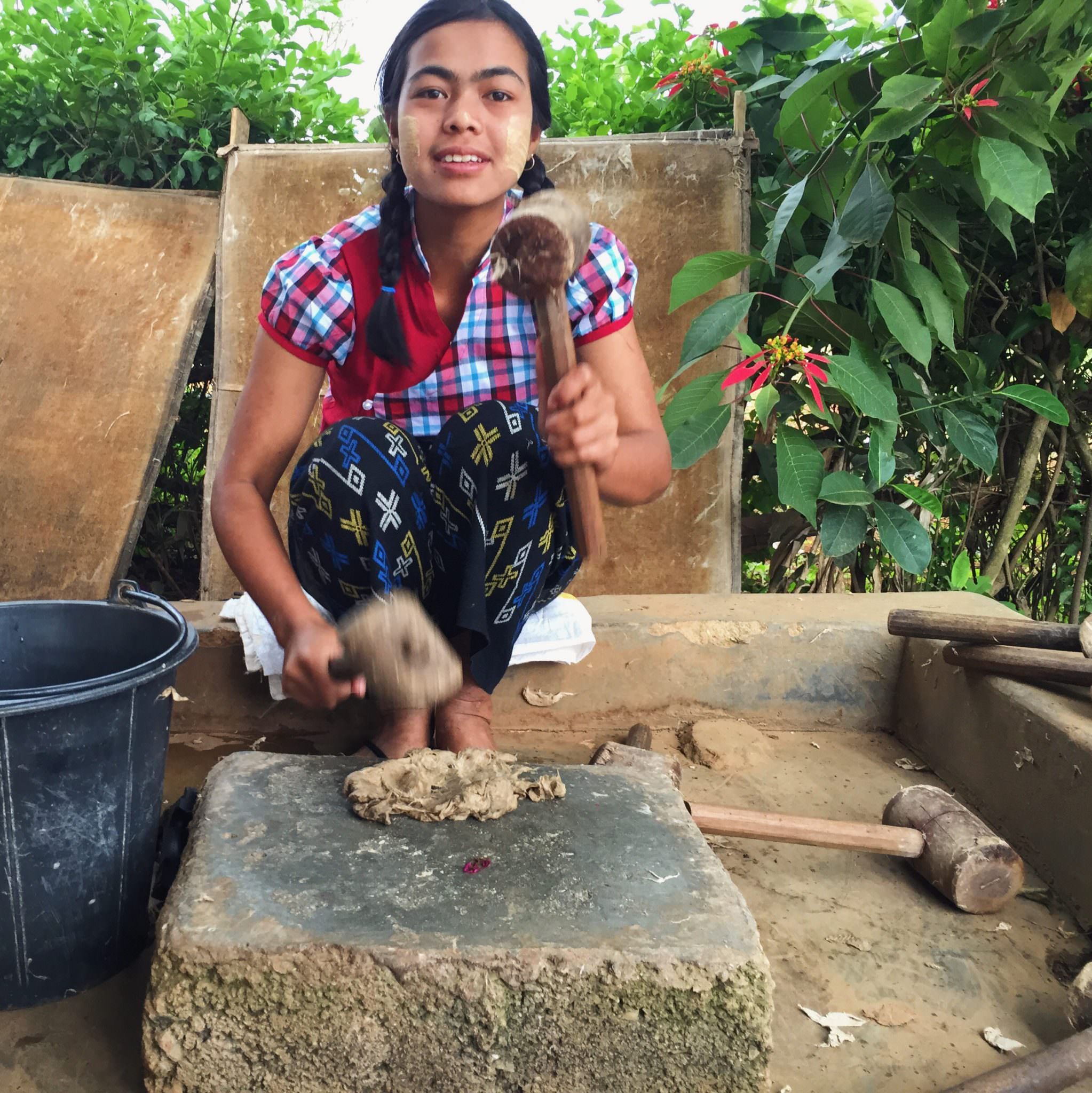 This girl demonstrated the process of pounding wet bamboo fibers into a pliable paste. From there, the paste is spread across linen mounted to a wooden frame. © 2015 Gail Jessen 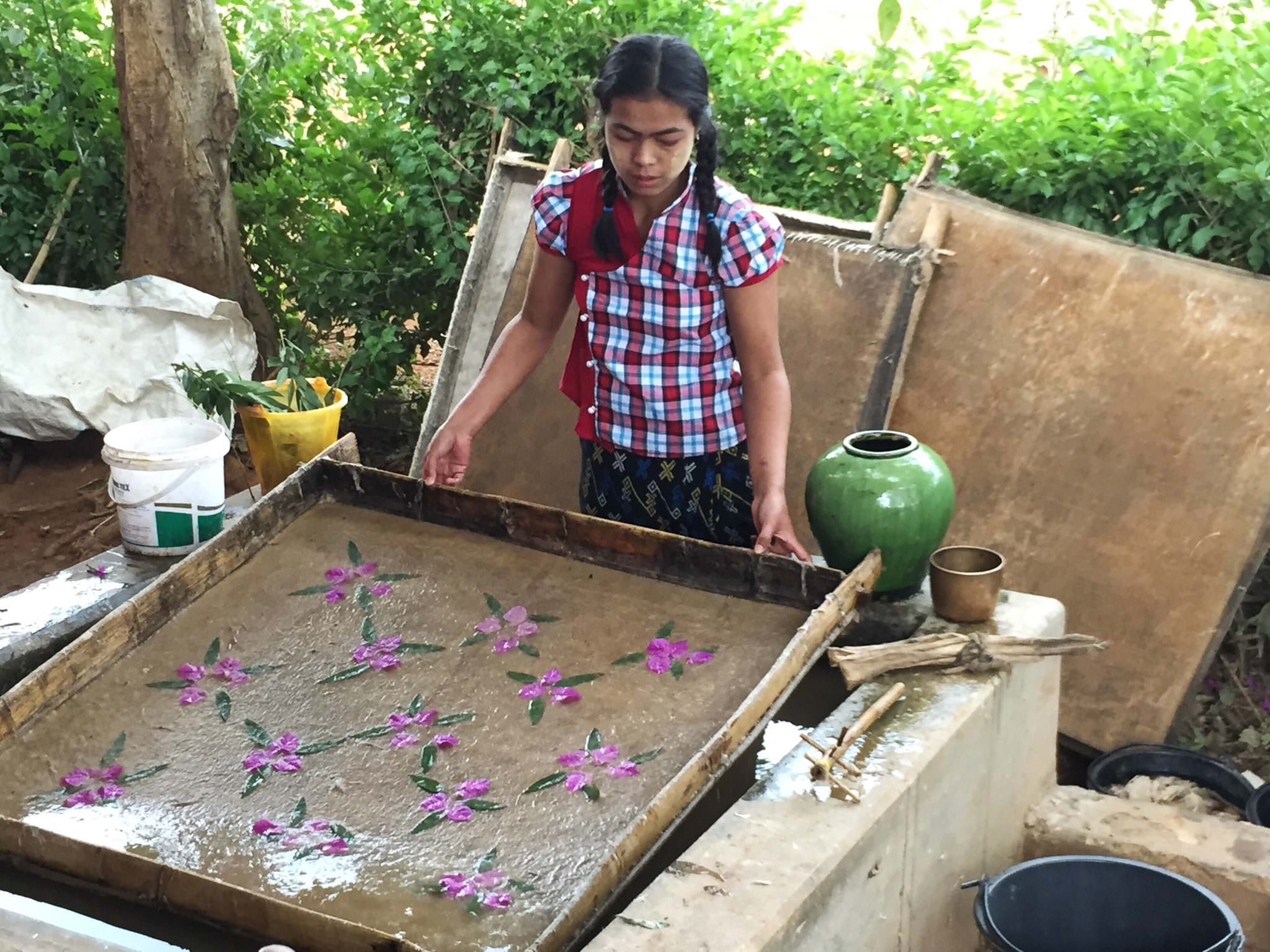 After placing flower petals in the frame that holds the bamboo paper paste, she carefully drains the water through the bamboo. © 2015 Gail Jessen 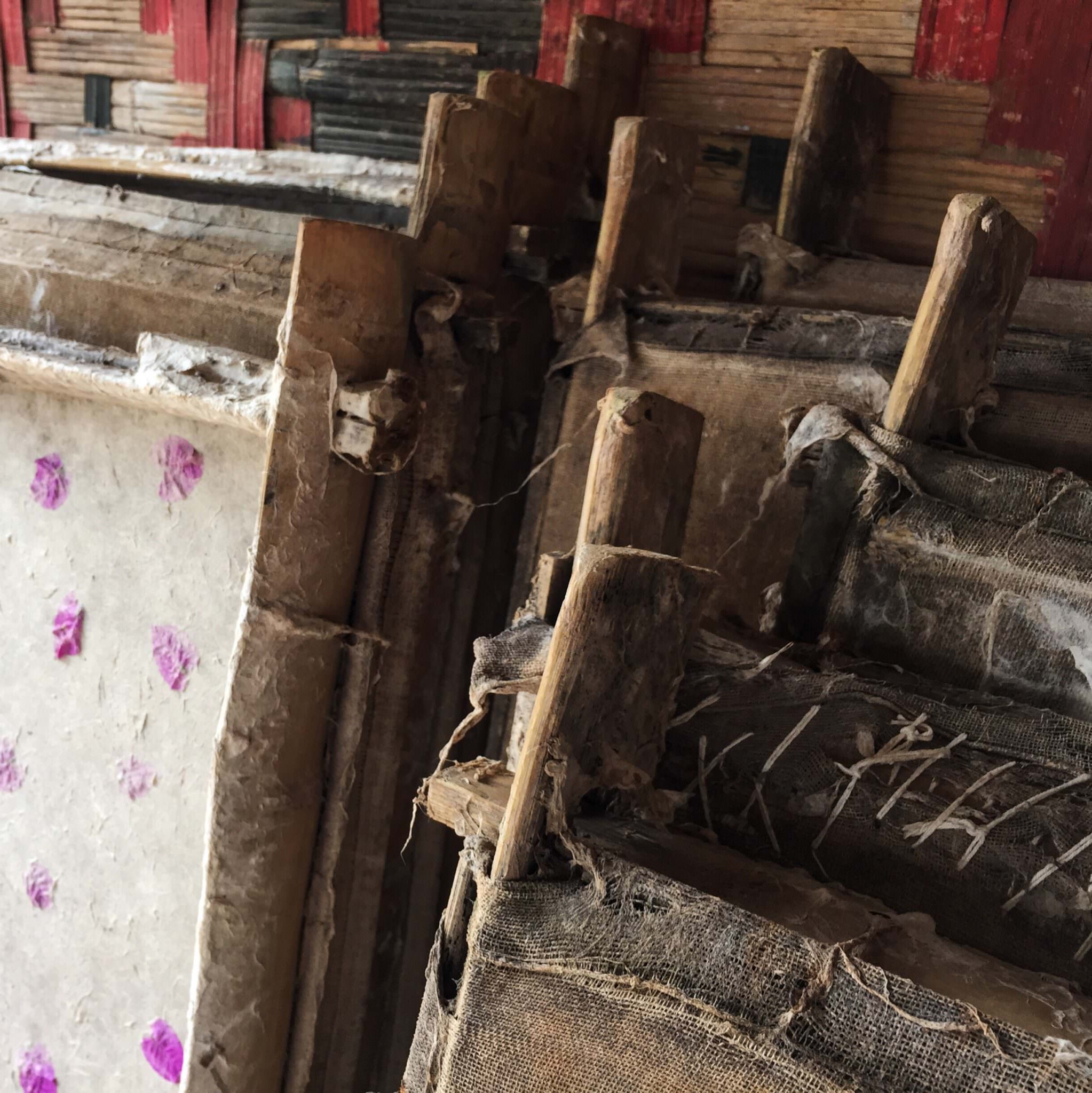 Linen stretched over wooden frames allows the bamboo paste to dry into sheets of paper, a process that takes 1-2 days. © 2015 Gail Jessen 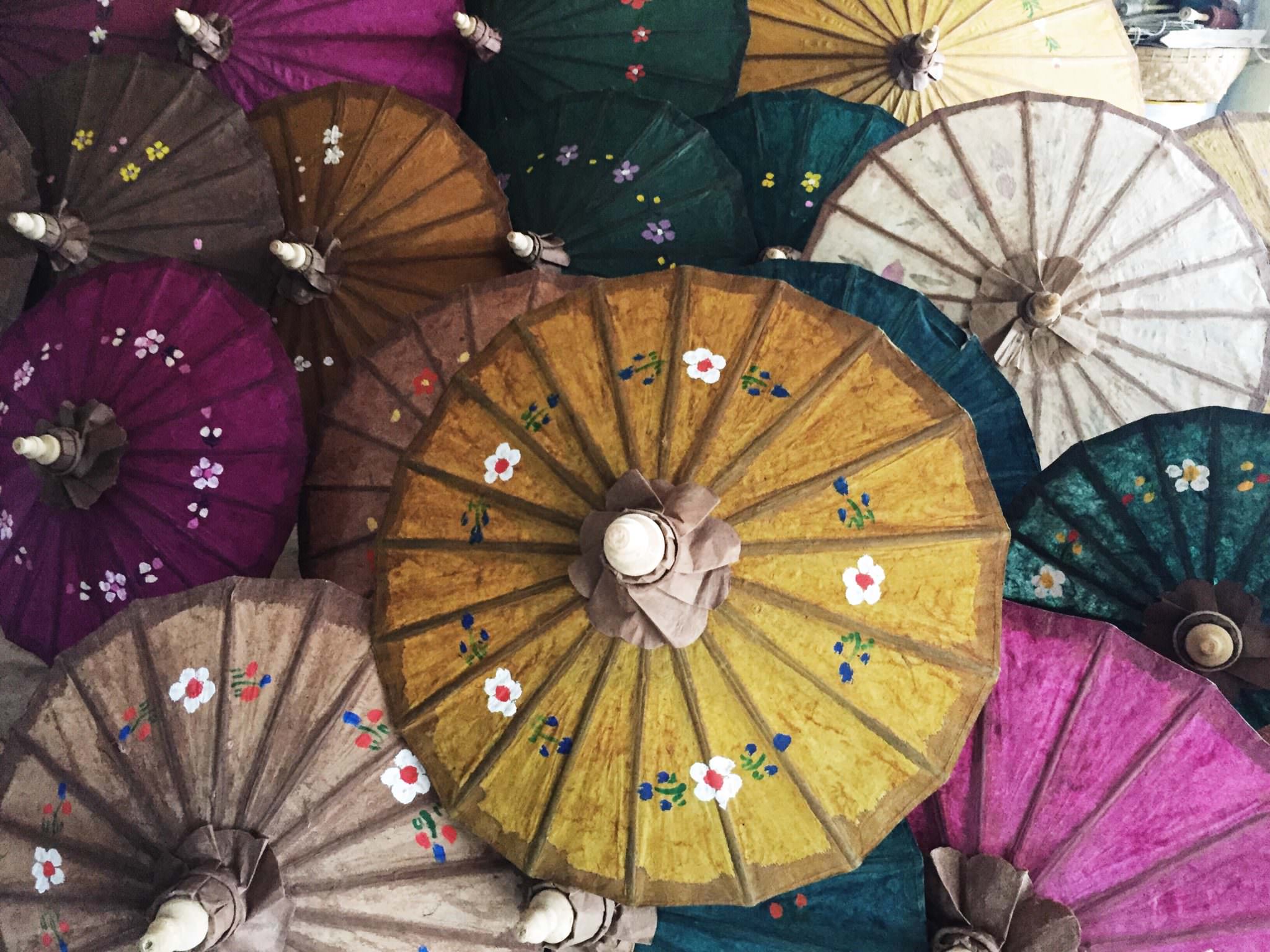 This workshop in particular is known for the parasols they construct out of their bamboo paper. These parasols with acrylic painted flowers are not for protection from rain storms, but rather from the intense sun. I saw many monks walking the streets with similar, albeit less ornate, parasols. © 2015 Gail Jessen 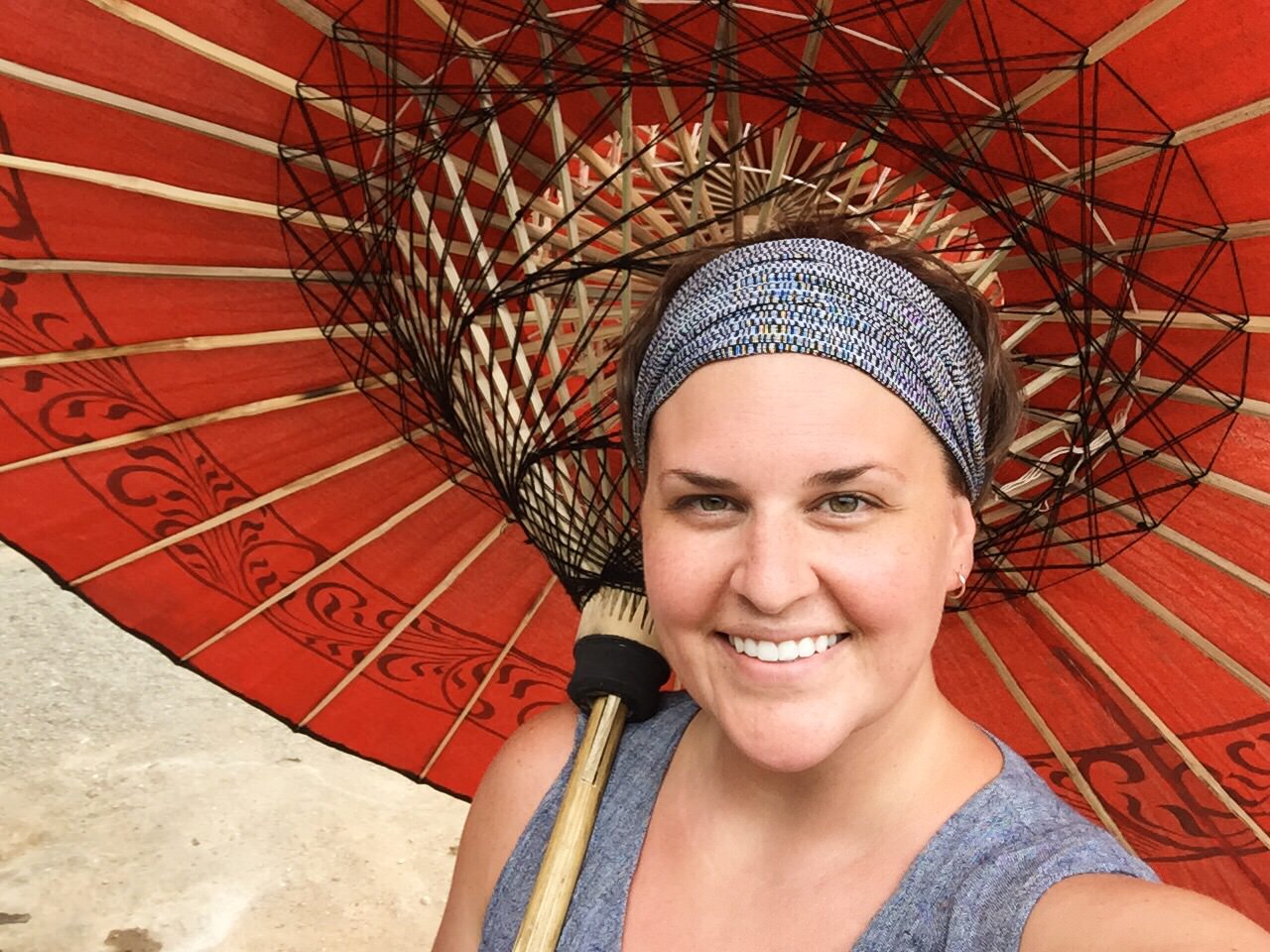 A giant parasol like this costs just $40 USD. Unfortunately, it wouldn’t fit in my backpack. © 2015 Gail Jessen

It’s unbelievable to me that after an investment of such care and skill to make the paper products, everything is so inexpensive. That’s one of the joys of Myanmar, though. As far as affordable travel destinations, you can’t beat it. Tourists have yet to take over and we really are so fortunate to witness life-as-normal. It’s a backpackers’ dream, minus the fact that there aren’t many places to stay (more on that later).

After our demonstrations (and shopping) at the Shwe Pan Khing workshop, Program Director Nanda told us we were headed for “a surprise.” We all assumed we were headed to the Aureum for dinner and bed…but he had other plans for us. 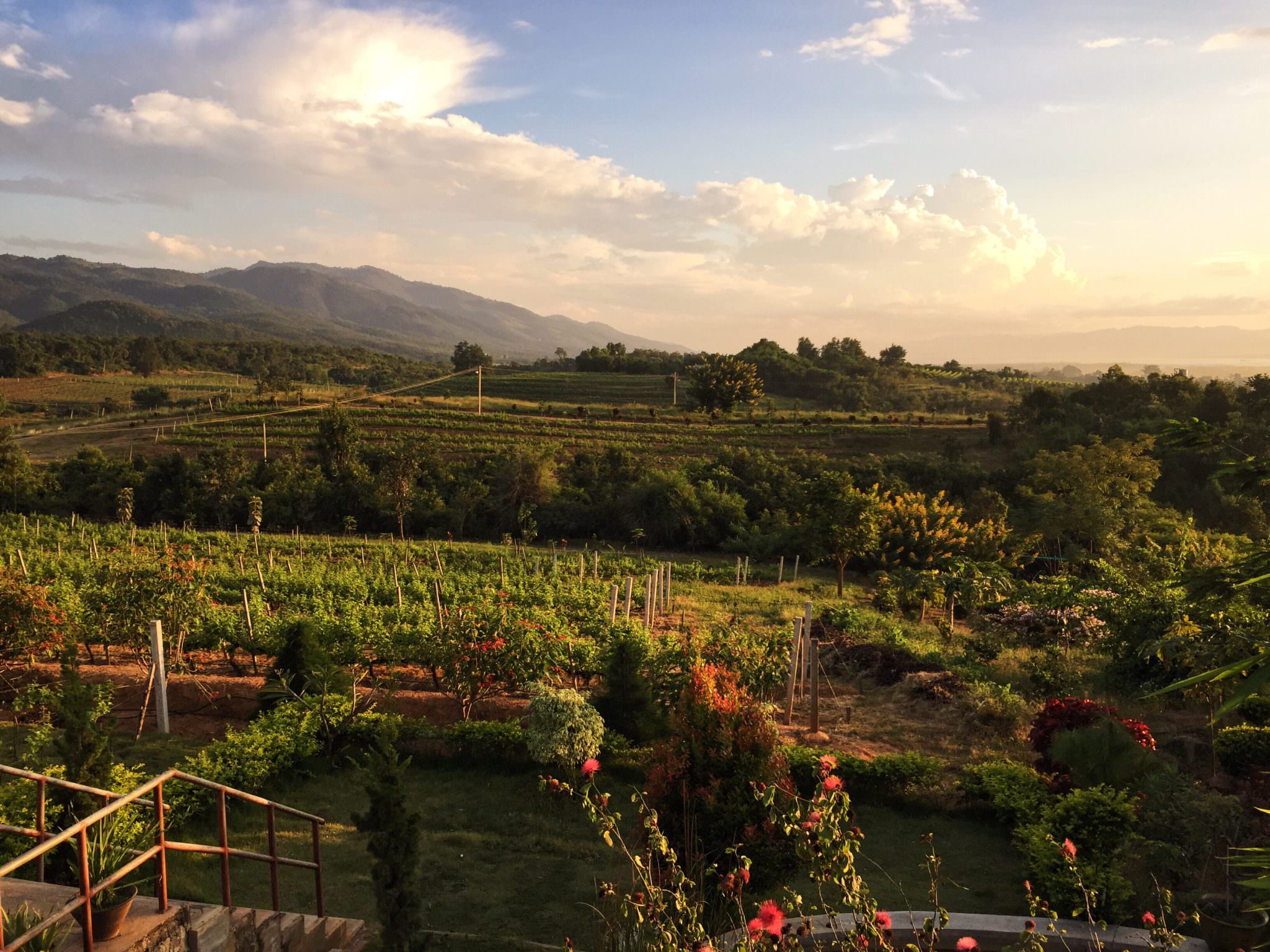 A winery in the hills of Myanmar to rival anything I’ve seen in Sonoma, California. Who knew? © 2015 Gail Jessen

Just as we caught a glimpse of Inle Lake, we turned a corner and headed up up up into the hills. A few of us spotted grapevines out the window and whispers of a wine tasting made their way around the bus. We were in fact headed for a winery. Red Mountain is one of the most picturesque vistas I’ve ever seen and easily  rivals anything in Sonoma County. I don’t know about you, but when I thought of Myanmar before this trip, hilltop wineries did not come to mind. Water buffalo pulling ploughs through fields? More like it.

I didn’t realize it then, but my surprise at finding a posh winery was indicative of a pattern of surprises I’d experience in Myanmar. It’s not that I had low exceptions, I had no expectations. We’re taught so little about the Burmese culture in our North American education. Beyond the timing of the elections being held during out tour and infamous heroine + candidate Aung San Suu Kyi, I had no idea what I was in for. I only hoped for an adventure. Myanmar delivered. It was the SE Asian experience I was seeking – and didn’t find – in Indonesia. 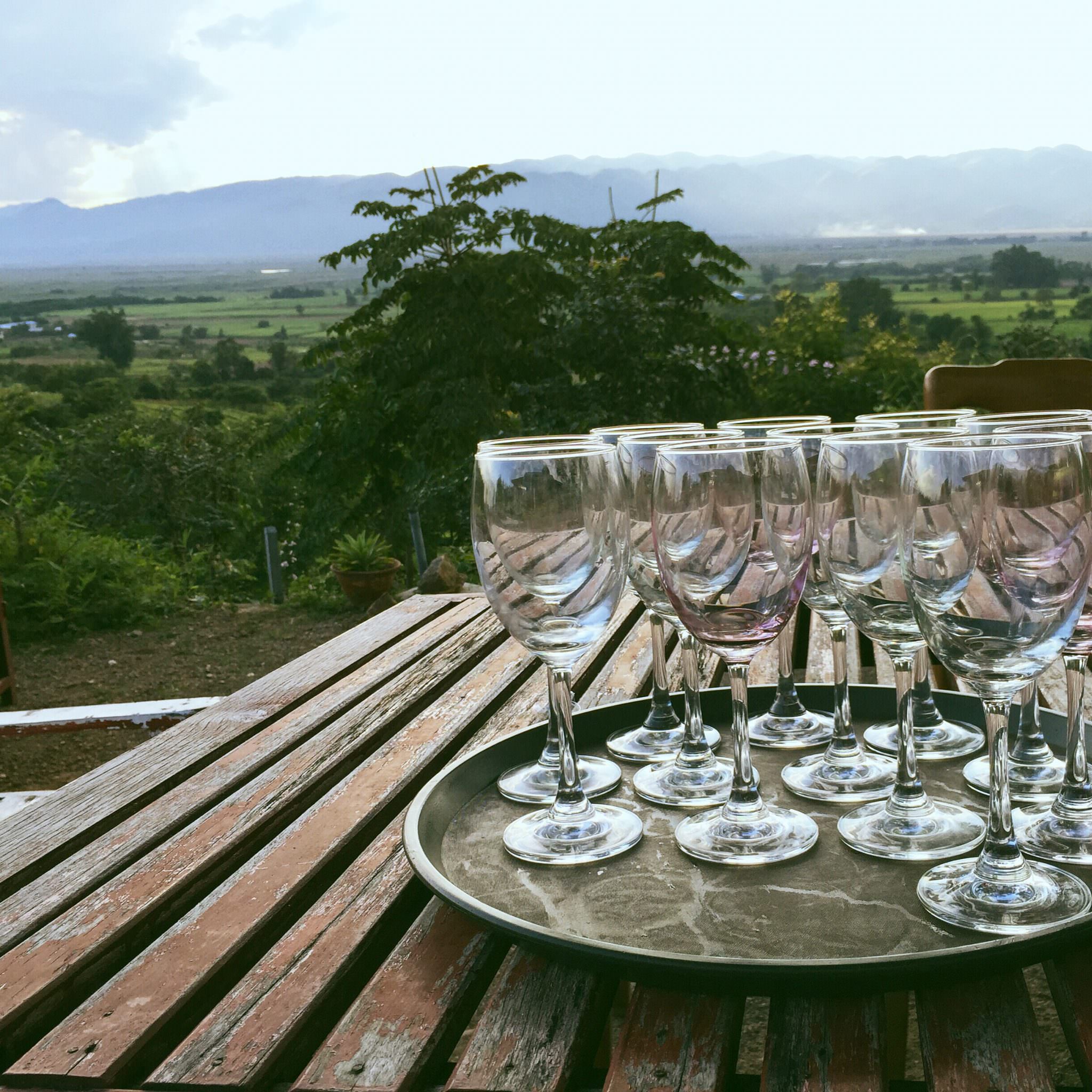 We were treated to a tasting menu of reds and whites that left tables full of empty glasses and sent happy tourists walking carefully up the hill to the bus. © 2015 Gail Jessen 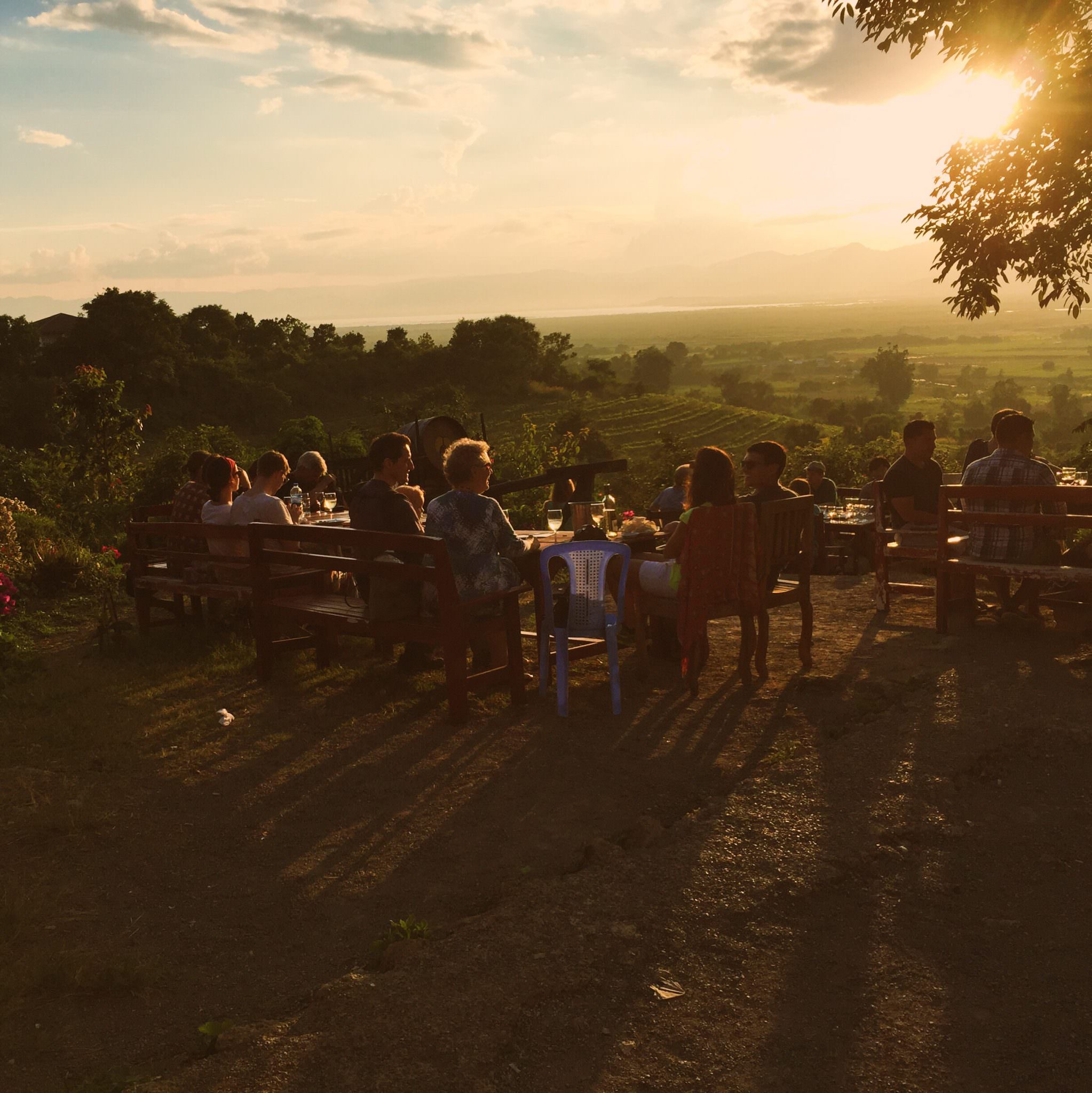 Our tasting was timed perfectly to the sun setting over Inle Lake. Of course it was. © 2015 Gail Jessen

I will let Aaron cover the logistics of our lodging at Aureum Palace I do want to say, at the very least, that photographing my suite’s bathroom for purposes of Instagram cred required the panoramic setting on my iPhone. The bungalows are easily 800 sq.ft., set on stilts within the lake. Although we arrived after dark, this is what the morning sun revealed on our patio… 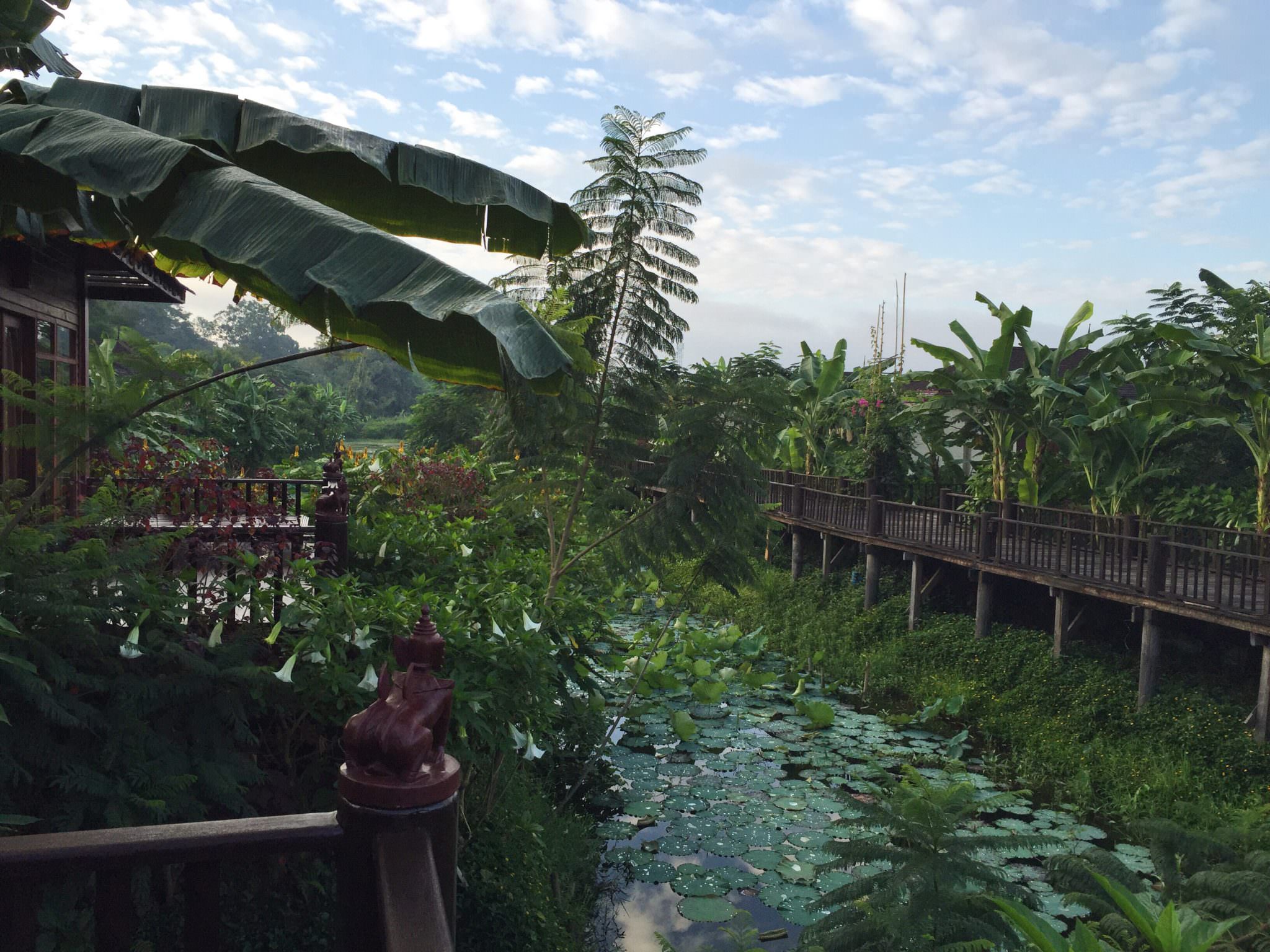 Good Morning, Inle Lake. Hands down one of the most beautiful hotels…period. © 2015 Gail Jessen

Hope to see you back here for the next article. Cheers to Adventure,
gail

My Voyage Report from Viking River Cruises’ Myanmar Explorer continues in the next article as we spend a full day exploring Inle Lake, Myanmar! Be sure to come back and keep reading. You’re also invited to follow along with adventurer Gail Jessen on Twitter or Instagram.