You are here: Home / Rivers / Africa / Avalon Waterways: What Are Its Smallest, Largest and Most Common Stateroom Sizes? 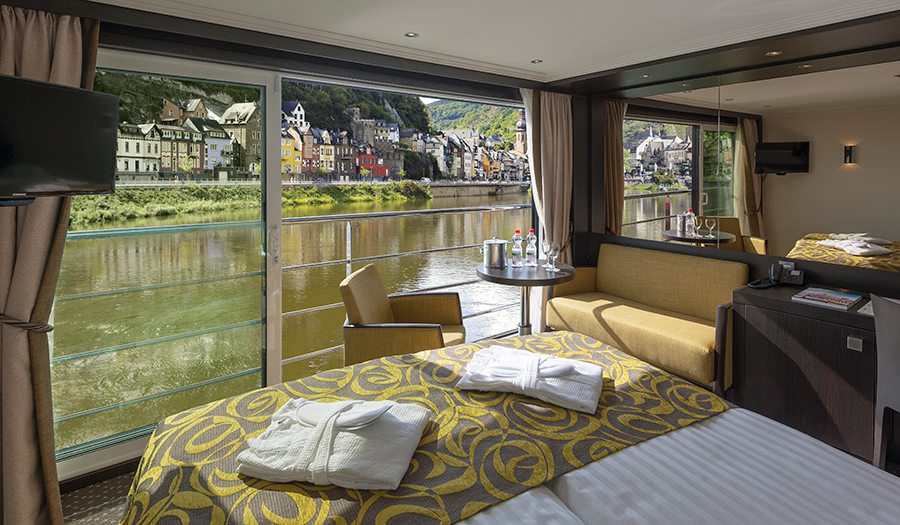 Avalon Waterways has 19 ships in its fleet, and most of them cruise the waterways in Europe. There are Avalon Suite ships on the Rhine, Moselle, Main, Danube, Dutch & Belgian Waterways, Rhône, Saône and the Seine rivers.

In Southeast Asia, Avalon has two smaller vessels. One operates on the Mekong and the other cruises on the Irrawaddy river. Compared to Europe, its river boats in Asia are smaller in size. However, average stateroom size is larger than those in Europe.

Since Avalon introduced its Suite Ships, there isn’t a lot of variation in stateroom size, with the exception of suites. Some ships have an Avalon Suite, which is 258 square feet; and others have Royal Suites that measure 300 square feet in size.

There are no single cabins available on the Suite Ships.

Avalon Waterways has two of its own ships in Southeast Asia. The Avalon Siem Reap features cruises on the Mekong. The Avalon Myanmar sails on the Irrawaddy River. The two ships are identical in terms of stateroom size, which is 245 square feet for all cabins.

Cruises are also offered on the Yangtze River, but travel is aboard ships that are shared by other river cruise companies – the Century Paragon and Century Legend, which we profiled here on River Cruise Advisor.

Avalon Waterways offers cruise packages in Africa and  South America. Travel is on river boats that are shared by other river cruise companies. The Isabella II and the Mayfair operate on the Nile River, and the M/V Aria and Amazon Discovery travel on the Amazon River. Stateroom size comparisons for these boats will be featured in another post.

In the chart below, each ship for Avalon Waterways is listed. There are a few variations among the ships in Europe. However, most vessels were built with the same specifications.

In Southeast Asia, all staterooms are the same size for all categories.

With Avalon Waterways, you won’t have to spend much time comparing ships, since they have become fairly standard since the Suite Ships were introduced in 2011.

See other articles about Avalon Waterways.