Emerald Waterways has welcomed two brand-new river cruise ships into its fleet, doubling their capacity and dramatically expanding the line’s reach along the rivers of Europe.

The upstart line, which was inaugurated last year as the value brand of upmarket river and tour operator Scenic, christened the two new 182-guest ships in Budapest, Hungary in a ceremony held in August. The two new ships are named Emerald Dawn and Emerald Sun.

Both ships feature 72 balcony staterooms and suites, along with 20 traditional “river view” staterooms. Two staterooms have been designed specifically for solo travellers. Balcony staterooms feature French balconies that have incorporated a drop-down window partition that turns the inside of the room into an open-air balcony. A small seating area is included in each stateroom and suite, outfitted with a faux wooden floor and two comfortable chairs placed opposite a small table that’s perfect for resting a book and a glass of wine on as you sail down the river.

Click here to read our Live Voyage Report from onboard Emerald Star on the Danube!

Emerald Dawn and Emerald Sun are sister-ships to last year’s Emerald Star and Emerald Sky. A fifth sister, Emerald Belle, is slated to debut next year. All vessels include an indoor swimming pool that transforms nightly into a cinema thanks to a telescoping floor in the pool. The pool area boasts a bar during the day, and a small but decent amount of seating space that becomes quite popular as guests find out about it. 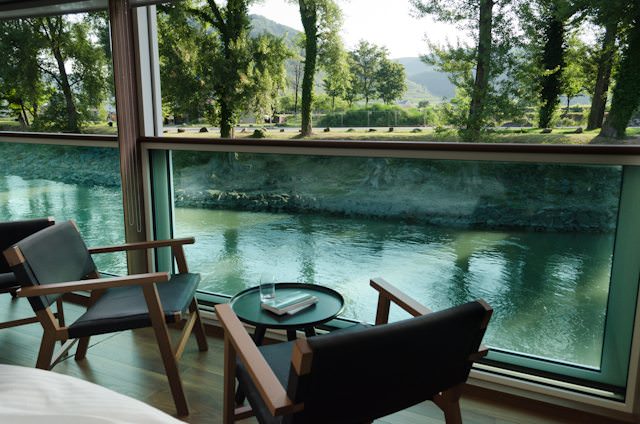 Most staterooms onboard Emerald;s river cruise ships eature retractable windows that drop down to create an open-air balcony within your own stateroom. Photo © 2014 Aaron Saunders

Known as Emerald’s “Star Ships”, these innovative river cruise vessels include more than you might think. Bicycles can be rented onboard ship for use ashore for no extra fee. Gratuities and transfers are included in the cruise fare, along with unlimited tea and coffee; wine beer and soft drinks with lunch and dinner; in-stateroom bottled water; WiFi internet access and most shore excursions.

Emerald Waterways now offers river cruises that traverse the rivers of Europe, including a series of 10, 11 and 14 day Cruise Tours that focus exclusively on France. Next year, Emerald Waterways will begin offering its first cruisetour itineraries in Asia, with a 16-night cruisetour itinerary that begins in Hanoi, Vietnam and travels along the Mekong River to Siem Reap, Cambodia.

More information on Emerald Waterways can be found by viewing our company profile here on River Cruise Advisor.