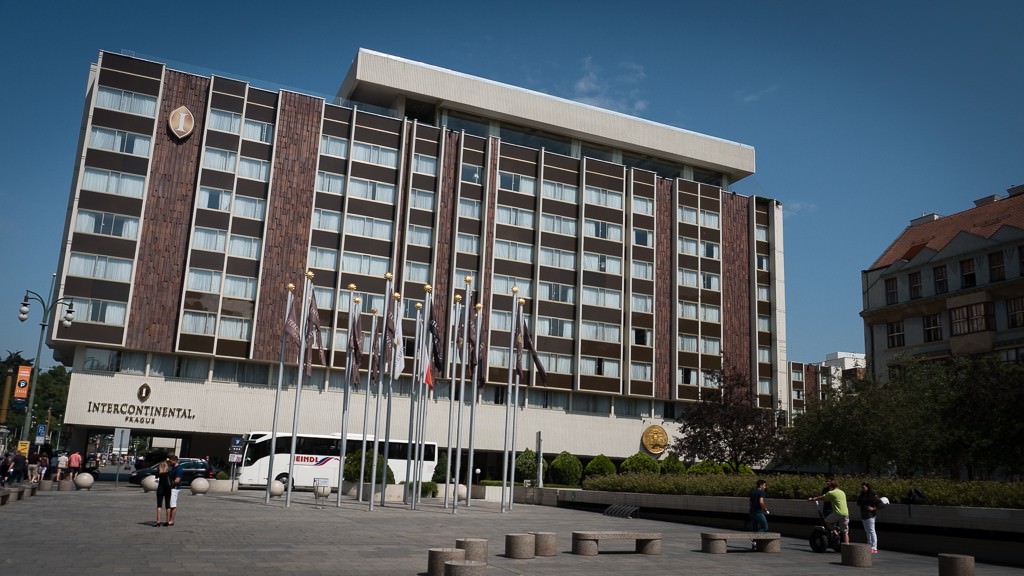 Our home base for two nights before we board Tauck’s ms Savor, the InterContinental Prague. The historic landmark is regarded as the finest-quality “brutalist” construction in the Czech Republic today. And that’s a good thing, right? © 2015 Ralph Grizzle

I had my doubts when approaching the InterContinental Prague yesterday. The monolithic hotel was built during the Soviet era, and it had all of the peculiar appeal (chuckle here) of Soviet era buildings. It was the type of building that I would cast if I were producing a Cold War spy movie. That’s not too far-fetched actually. The five-star property opened more than 40 years ago, when Czechoslovakia was under Soviet rule, so it certainly looks the part. The nine-story building’s structural style was known as brutalism (derived from the French béton brut – raw concrete). The general manager appeared almost apologetic in a letter welcoming guests.

Did you know that the hotel design is protected by Czech state law? The InterContinental Prague plays an important part in Prague’s history and architecture, and because of this, the design and features are protected and preserved by the Ministry of Heritage …

Reading between the lines, you get the impression that the general manager heaved a heavy sigh when he discovered he could not dress up his property a bit. Enter double-agent Russell Crowe, stage left.

My room on the sixth floor was spacious and clean, with two double beds. I had a good night’s sleep on the firm mattress and awoke at 7 a.m. to shower and head down for breakfast. The morning meal, while well-handled, was a bit chaotic. Several river cruise companies were using the iconic InterContinental, and all of them began their tours before 9 a.m., hence the breakfast room was congested. It took me a few minutes to find a place to park my plate. Nonetheless, the friendly staff worked efficiently to clear tables and keep breakfast items stocked. It was pure choreography – with bacon and eggs.

If I were returning to Prague, would I stay at the InterContinental? Absolutely. Depending on price, of course. A Four Seasons is two blocks away and there’s a Hilton in the Old Town. I certainly would do some comparative shopping. The thing that gives the InterContinental an edge, however, is its ninth-floor restaurant, which I’ll tell you about in a bit.

Tauck offered two complimentary walking tours today. I chose the Gardens and Churches Tour. An option was to visit the Kafka Museum, a treasure house of documents, photographs and interactive exhibits dedicated to writer Franz Kafka and his dark imaginary visions. The tour also included a brief history of Jewish Prague.

Our Tauck tour directors divided us into manageable groups of 18 (I believe we are a total of 120 on this Danube Reflections river cruise). Each group was led by a local guide, and we had headsets so that we did not have to keep huddled up next to our guide. 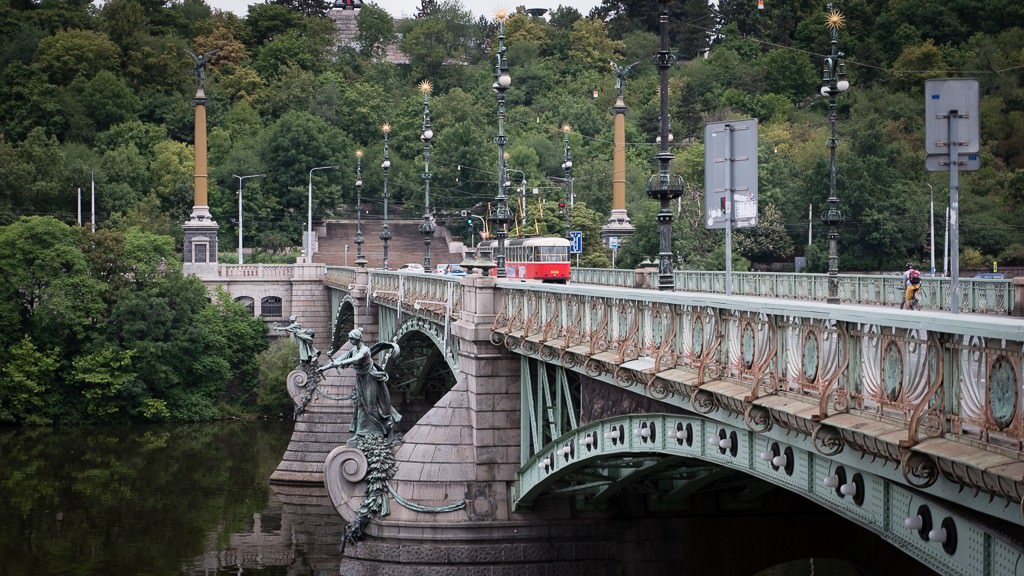 Our tour started at our hotel. Before crossing the Vltava, the longest river in the Czech Republic, we stopped as our guide imparted some of the history of Prague. Across the river, dominating the skyline, was the Prague Castle complex. We will visit the castle tomorrow on a three-hour tour before departing for Regensburg, Germany, where we will board ms Savor.

I’ll jump ahead a bit to say that I like the way that Tauck structured the tour today. I’m not sure how far we walked, but those who strive for 10,000 steps a day would have achieved their goals. The pace was quite good, not breathless at all but at just the right clip, fast enough to keep things exciting yet relaxed enough for us to appreciate what we were seeing. 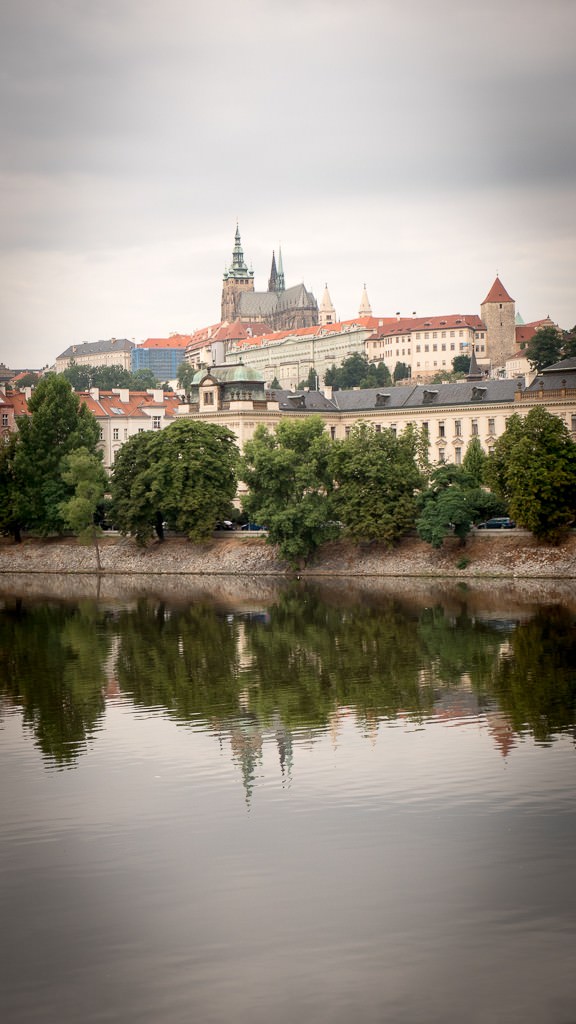 View of Prague Castle on our walk today. © 2015 Ralph Grizzle

The weather was warm but overcast. At one point, a light rain sprinkled on us, but only for a few minutes. The opaque sky cast the perfect light for photographing such icons as the Charles Bridge in this “city of 100 spires.” 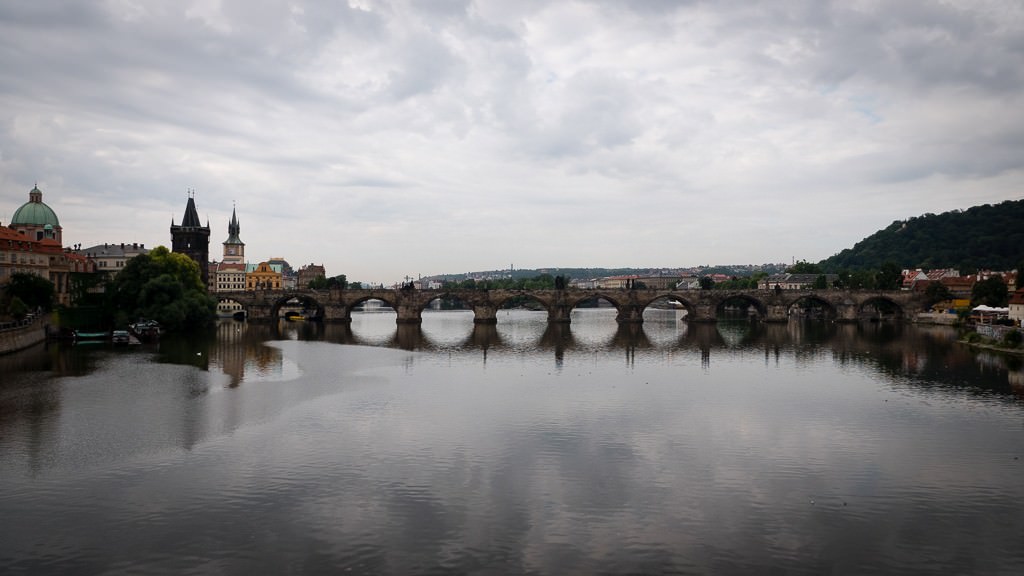 Our guide Renata was excellent, with appropriate humor and good information that she fed to us in clear English. She made us laugh more than once. Just before she went in to buy tickets for our group at the St. Nicholas Church, she told us she was a bit nervous. She explained that the last time she was here the ticket seller was a nun. “I thought they were friendly people,” Renata said. “But she was so rude. She could have been employed in a work camp.”

Renata peeked inside and sighed relief. Luckily, the ticket seller was a kind-looking man. 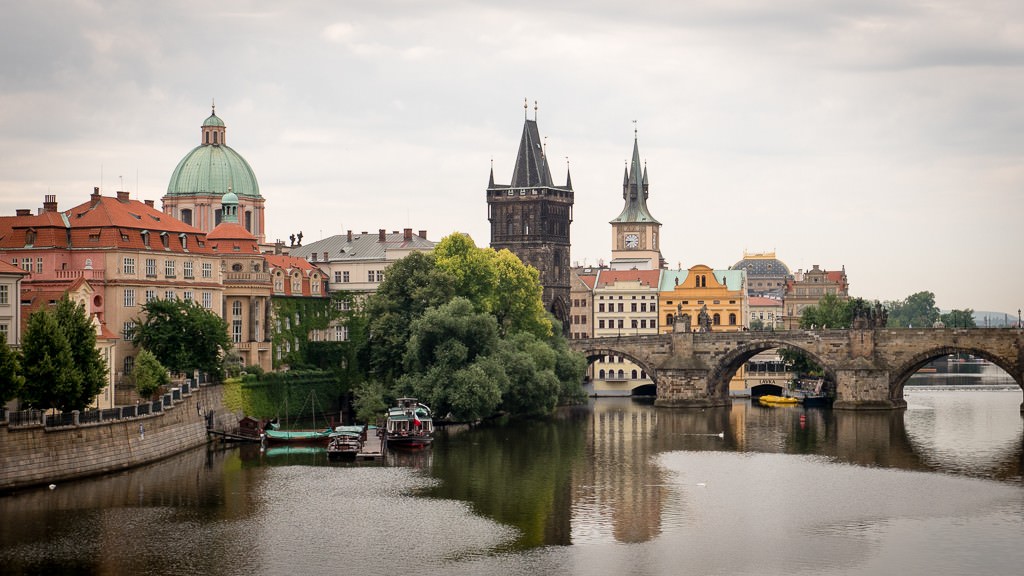 Prague’s Old Town and the Charles Bridge, which crosses the Vltava River to link the Little Quarter with Old Town. © 2015 Ralph Grizzle

We crossed the Vltava river to the “Lesser Town” (or the “Little Quarter”), a picturesque, historic neighborhood at the foot of Prague Castle.

Our first stop was Valdstejnska Garden. The original palace and gardens were built in the years 1623-1630 by Albrecht von Wallenstein, Duke of Mecklenburg (1583-1634), who made his name and fortune as the Commander-in-Chief of the Imperial forces in the Thirty Years War. I learned that the original sculptures in the garden were seized by the Swedes and now adorn the gardens at Stockholm’s Drottningholm Castle, home to Sweden’s Royal Family. “The Swedes are friendly people today,” Renata joked. “They weren’t so friendly in the 17th century.”

Following are photos from our tour today … 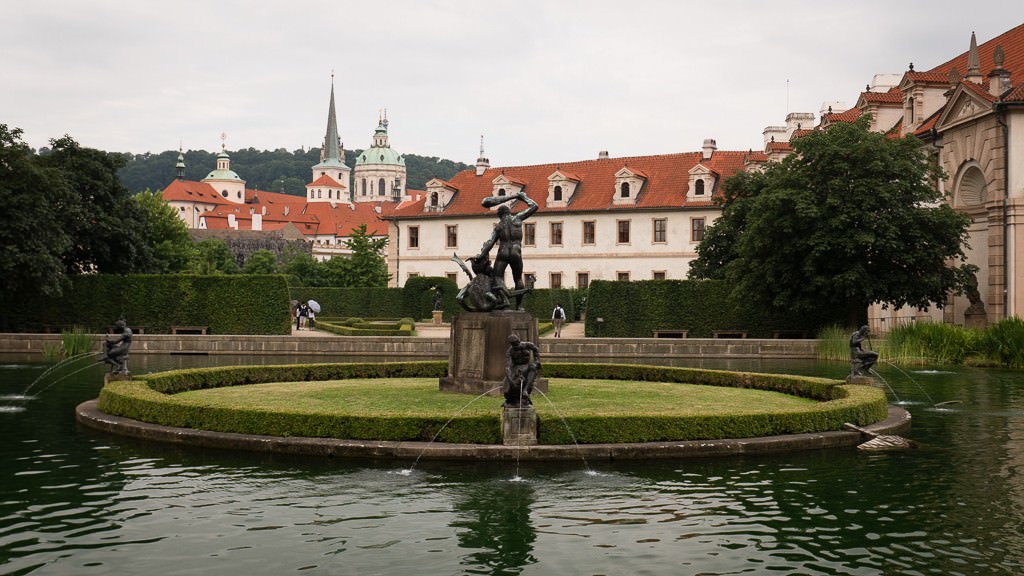 The Valdstejnska Garden. The original sculptures were taken by the Swedes in 1648 and can now be seen Stockholm’s Drottningholm Castle, home of Sweden’s Royal family. © 2015 Ralph Grizzle 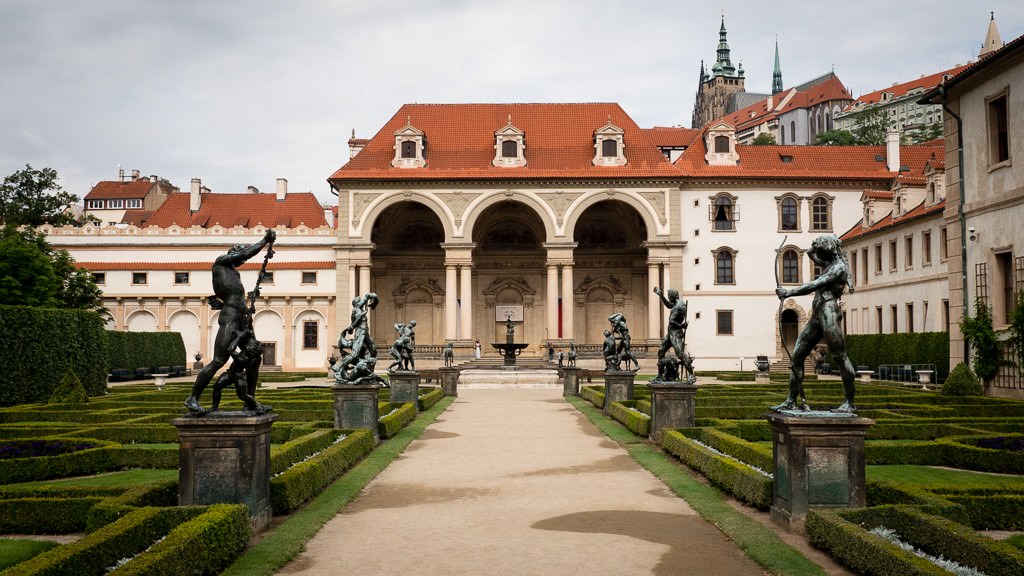 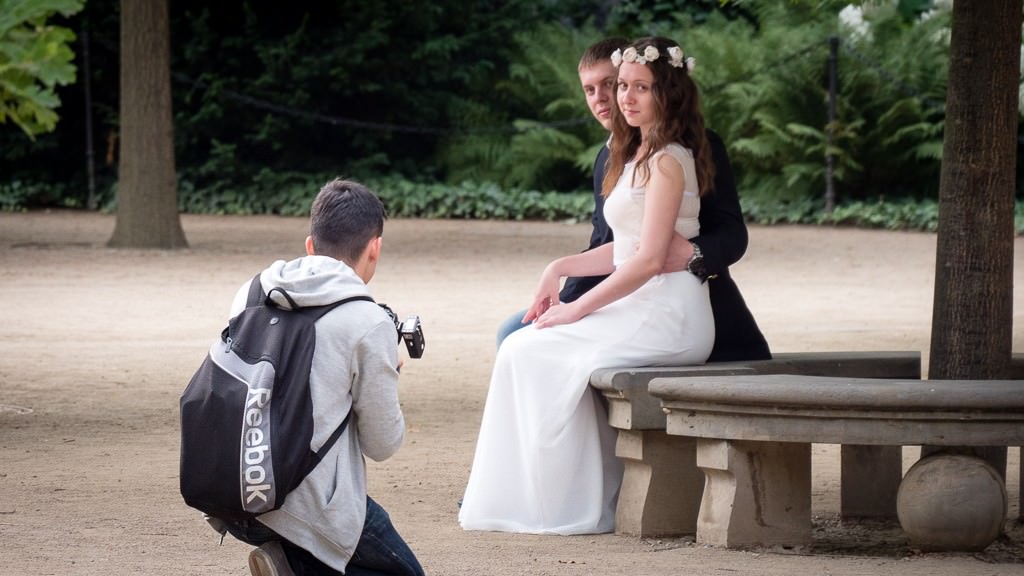 Posing for a wedding in Valdstejnska Garden. © 2015 Ralph Grizzle 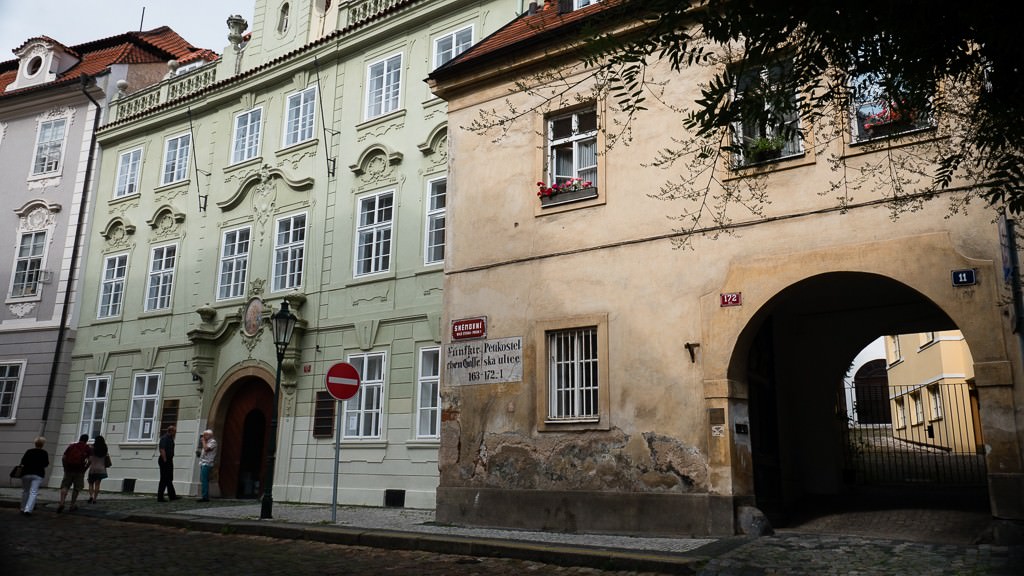 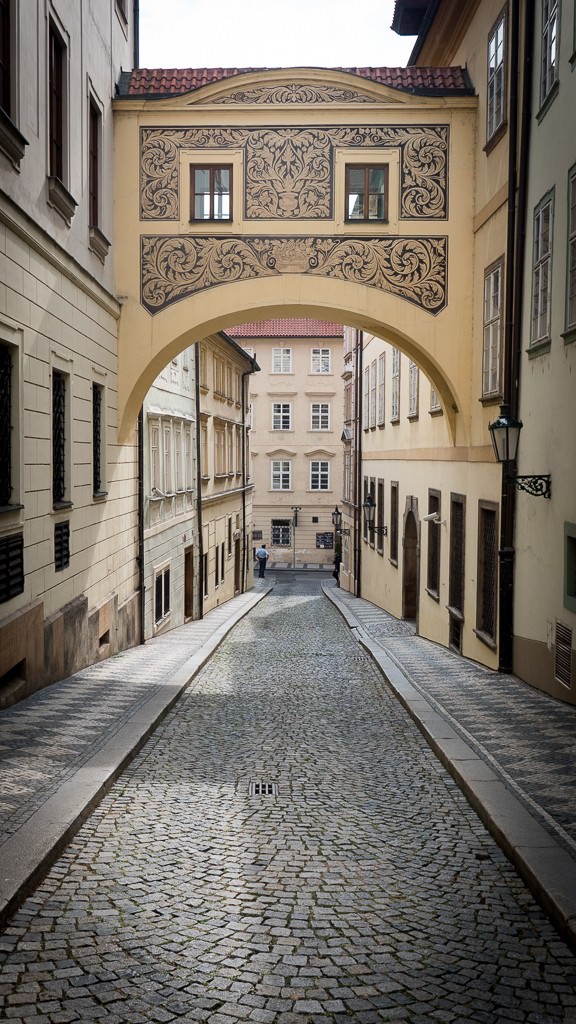 Resembles the Bridge of Sighs in Venice. © 2015 Ralph Grizzle 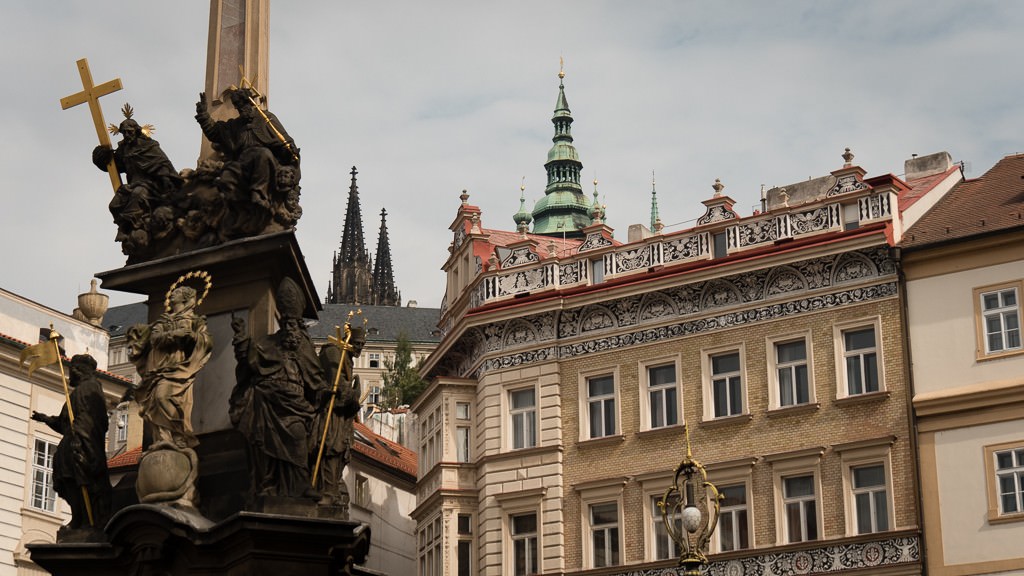 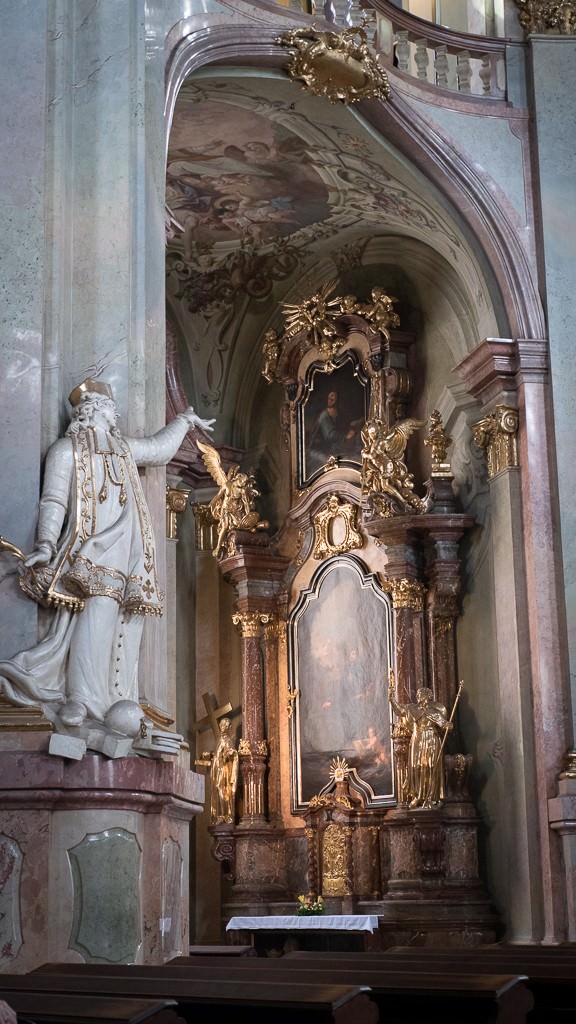 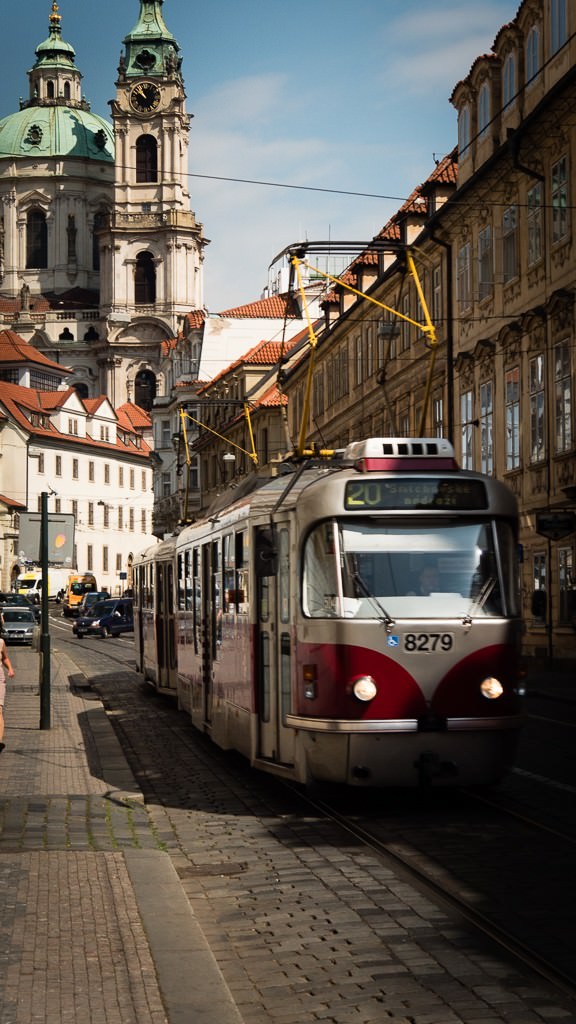 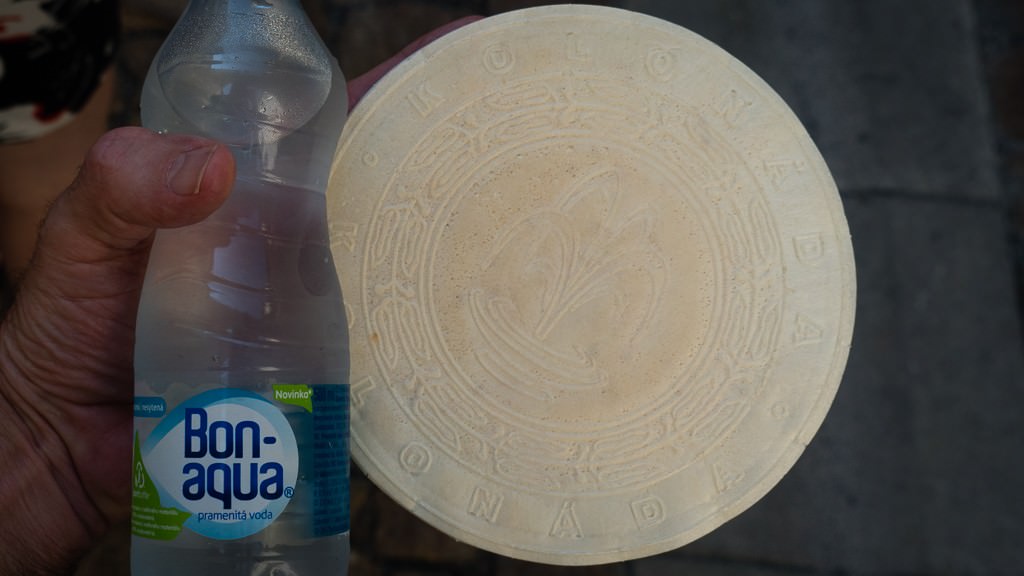 Midway through our morning tour, Tauck’s tour directors provided water and a Czech snack called, Colonada, a giant wafer that can have different fillings. © 2015 Ralph Grizzle 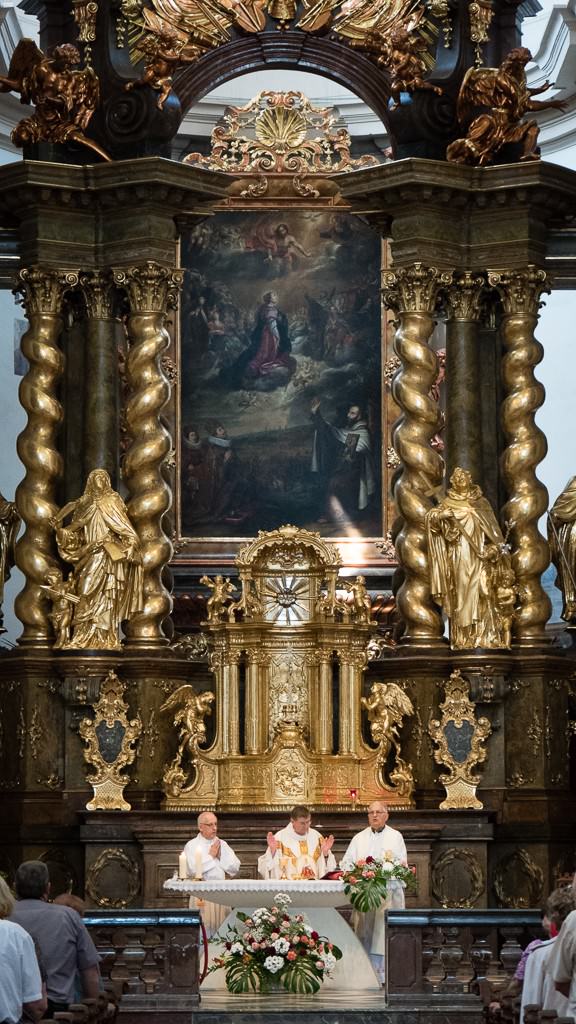 At Prague’s Church of Our Lady Victorious. © 2015 Ralph Grizzle 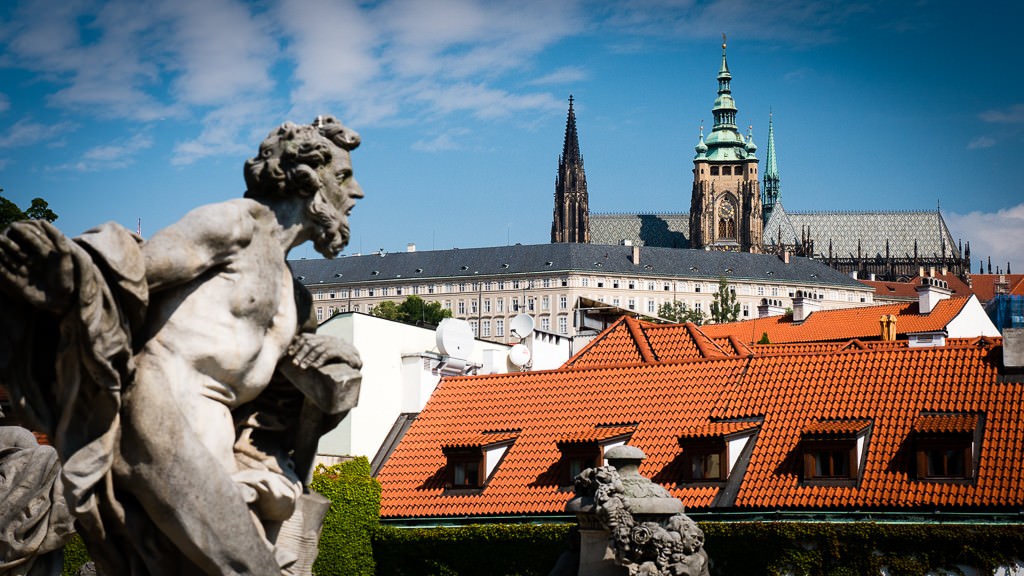 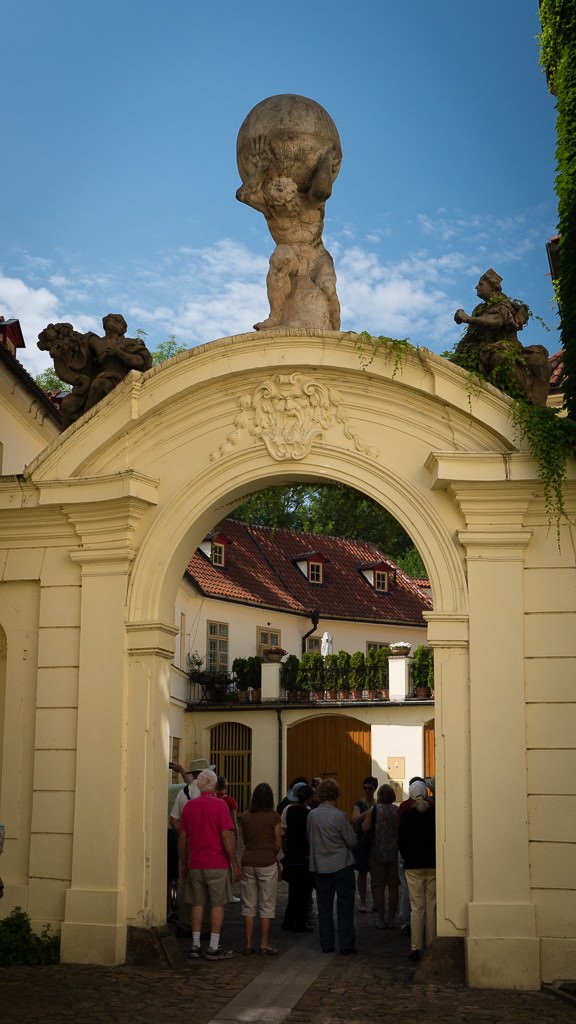 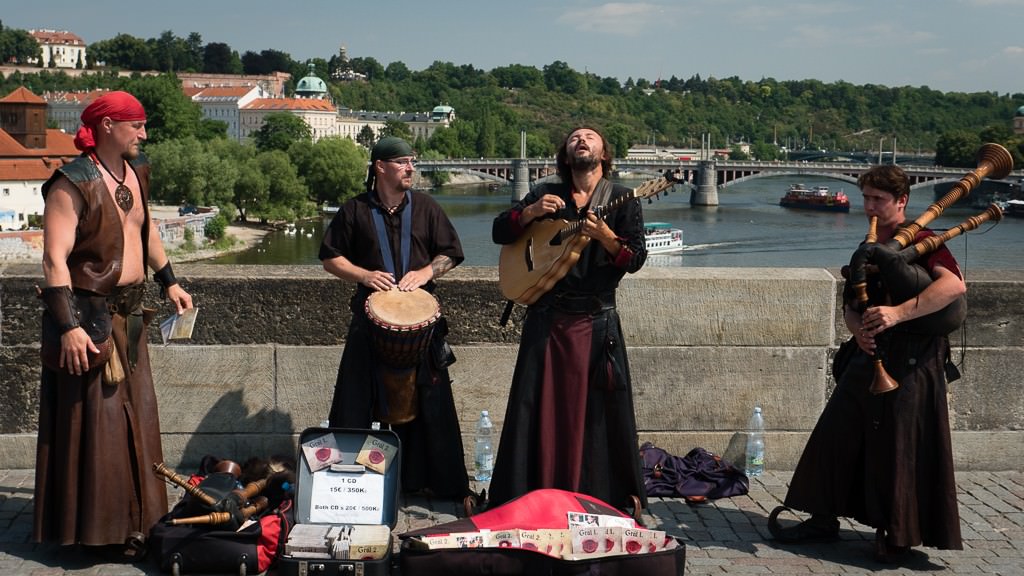 Back At The InterContinental

After a wonderful day of touring Prague, I enjoyed dinner with the voucher that Tauck gave to me last night.

The setting, on the ninth floor of InterContinental Prague, was absolutely breathtaking. The only reservation I could get had me sitting indoors. I was okay with that, but when I showed up the maitre d’ asked me if I would like to sit on the terrace, with a view of Prague Castle and the Old Town. I was delighted. It was a gorgeous evening, with sunset coming in about 30 minutes. 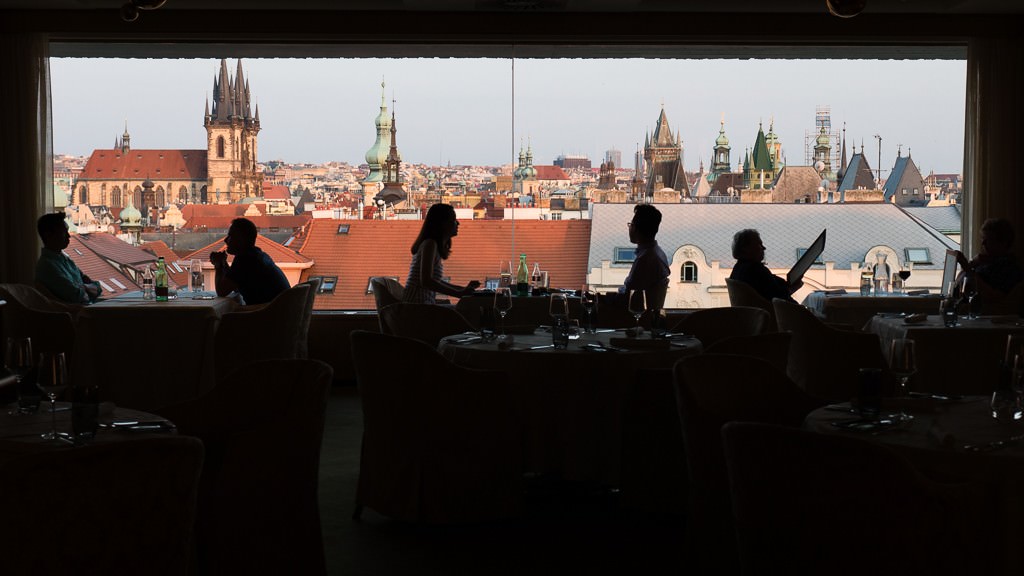 The Tauck tour directors had given me more than 1,900 Czech crowns to spend on dinner. I had a starter, two beers, a large bottle of sparkling water, a main course and dessert – and still had 600 Czech crowns remaining. Tauck had been extra generous. No penny-pinching. No telling me, Yes we’ll pay for dinner, but you have to pay for your alcohol. Tauck was super-classy in the way it handled dinner. Was Tauck’s gesture is a precedent for things to come this week? 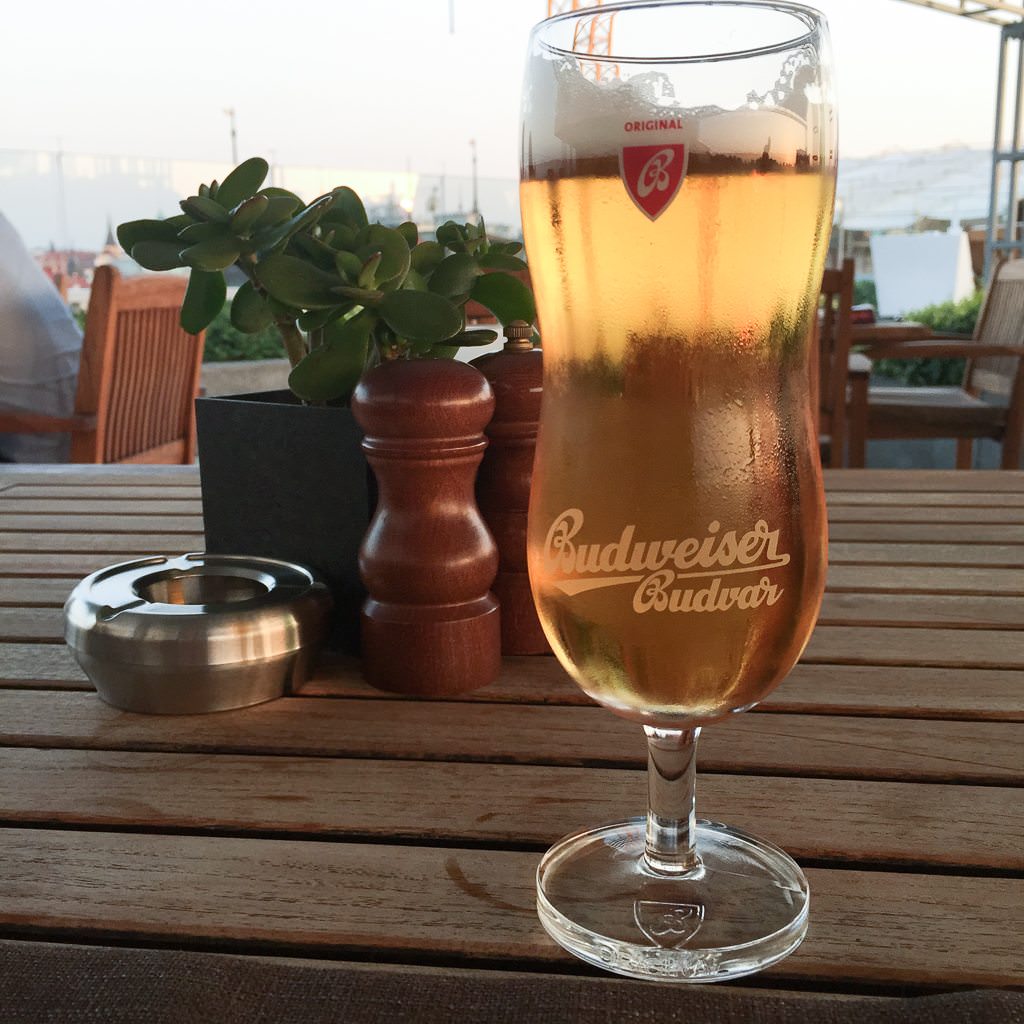 The original Budweiser Budvar (no connection to Anheuser-Busch). The term Budweiser derived from the Czech town of Budejovice. © 2015 Ralph Grizzle

Sunset was absolutely gorgeous. I sat for two hours, eating mindfully and nursing my beer. The InterContinental Prague, the city where it was situated, and Tauck had won me over. It was a good start to what I think we’ll be a great week ahead. 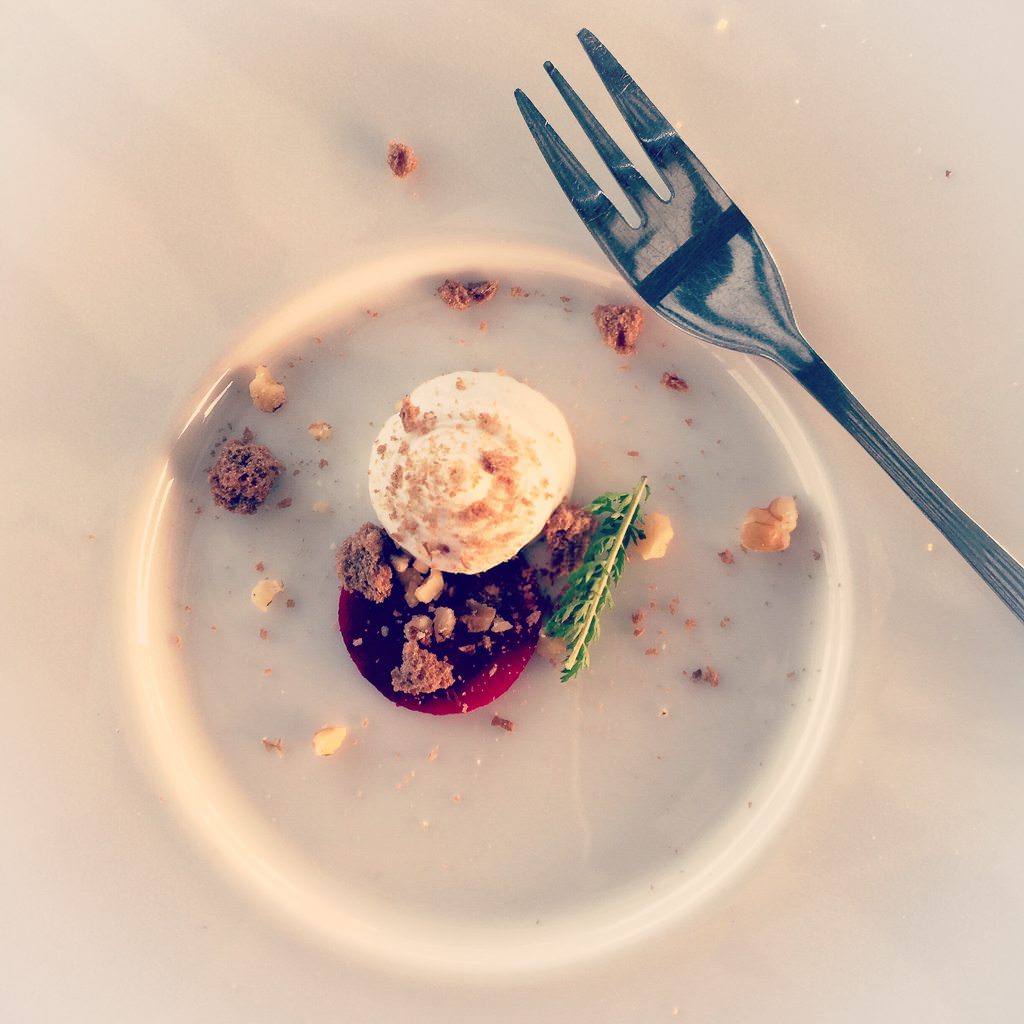 An amuse-bouche to begin dinner at Zlatan Praha, where I dined on the rooftop terrace at the InterContinental Prague. © 2015 Ralph Grizzle 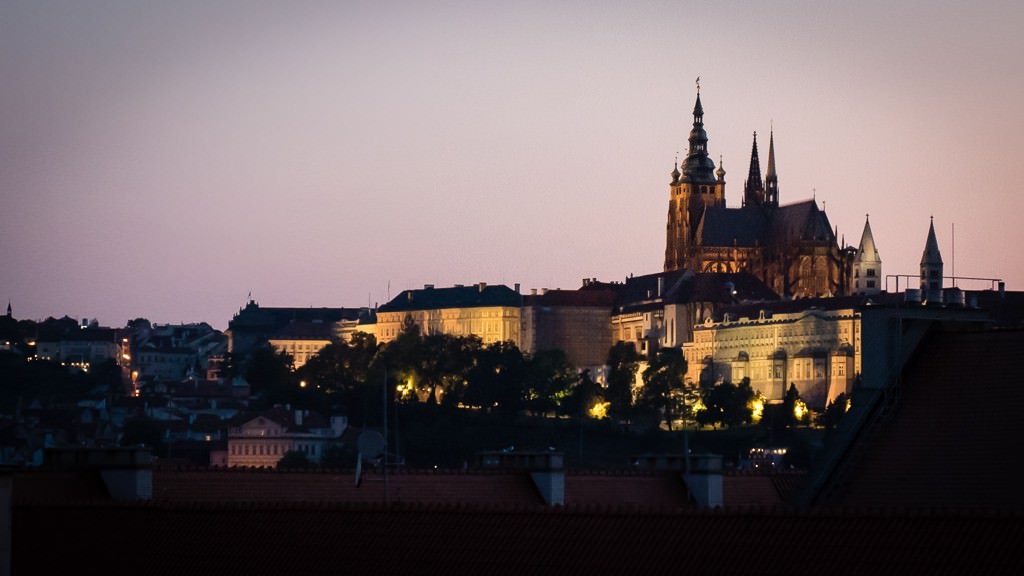 Prague Castle at sunset, from my table last night at the Intercontinental Prague. © 2015 Ralph Grizzle