Well, you certainly don’t see this every day: Last week, 20,000 residents were evacuated from the Riehl and Muelheim districts in Cologne, Germany after an unexploded one-ton, American-made World War II bomb was found near Muelheim Bridge, which crosses the Rhine River.

Along with the mass evacuations, all shipping traffic on the Rhine came to a complete standstill out of an abundance of caution for the unexploded ordinance. Which, if you’re reading between the lines, means that some passengers somewhere out there didn’t get to experience their call on this famous German city.

Additionally, air traffic above the site was also banned. 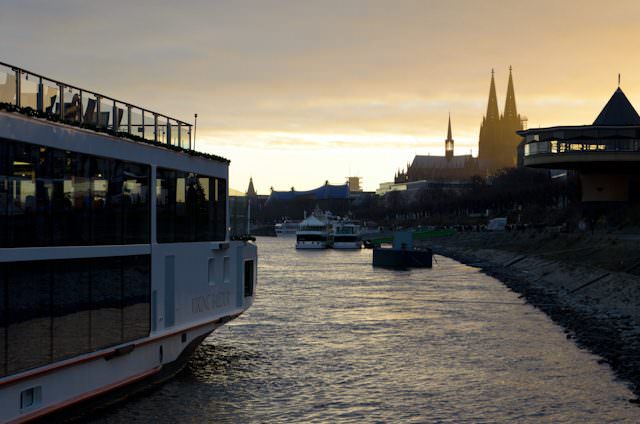 Cologne, Germany. An unexploded one-ton bomb dating back from WWII was found and had to be diffused last week, temporarily halting traffic along the Rhine. Photo © 2013 Aaron Saunders

The bomb was discovered by construction crews some 16 feet underground on Friday, May 22 and removed in the late afternoon of Wednesday, May 27. There are no reports of river cruise ships directly affected by the shutdown of traffic on the Rhine, or if ships docked in Cologne were forced to undock and proceed elsewhere following the bomb’s discovery.

Interestingly, finding large unexploded bombs isn’t so uncommon in Germany, which was bombed heavily during the closing days of World War II. While the German government has undertaken measures to remove bombs, the very nature and size of these unexploded devices means that many are simply not found until a construction crew discovers one. In the case of the most recent find in Cologne, workers were digging a trench for a new pipeline.

Here at River Cruise Advisor, we always caution flexibility on any cruise, and this latest shutdown on the Rhine (for a very good reason) is an excellent example of what we mean by that. River cruises face numerous additional dynamic and ever-changing forces that ocean cruises simply aren’t exposed to.

In this case, it was unexploded ordinance dating back more than 70 years.

Traffic along the Rhine has resumed, and ships expected to call on Cologne should have no difficulty doing so.