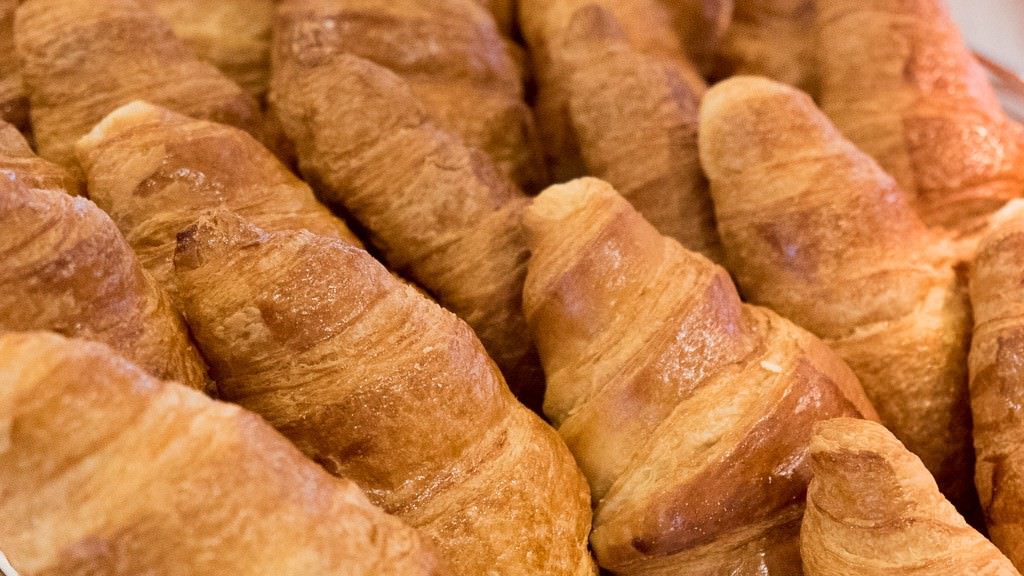 This morning, after a buffet breakfast in the dining room where I found it hard to resist the flaky, fresh croissants, I watched as Loire Princesse pulled away from the quay and began chugging downriver. Not all guests were on board. They had not purposely “missed the boat,” however. They had opted to do a Nantes city tour and catch up with Loire Princesse at Saint-Nazaire.

Those who stayed on board enjoyed a three-hour transit along the river. As I had done the city tour a couple of days before, I sailed away with Loire Princesse. However, I recommend that for those sailing Loire Princesse, be sure to do the city tour. Nantes is a beautiful city with an intriguing history. And besides, you’ll transit this stretch of river on the way back to Nantes. 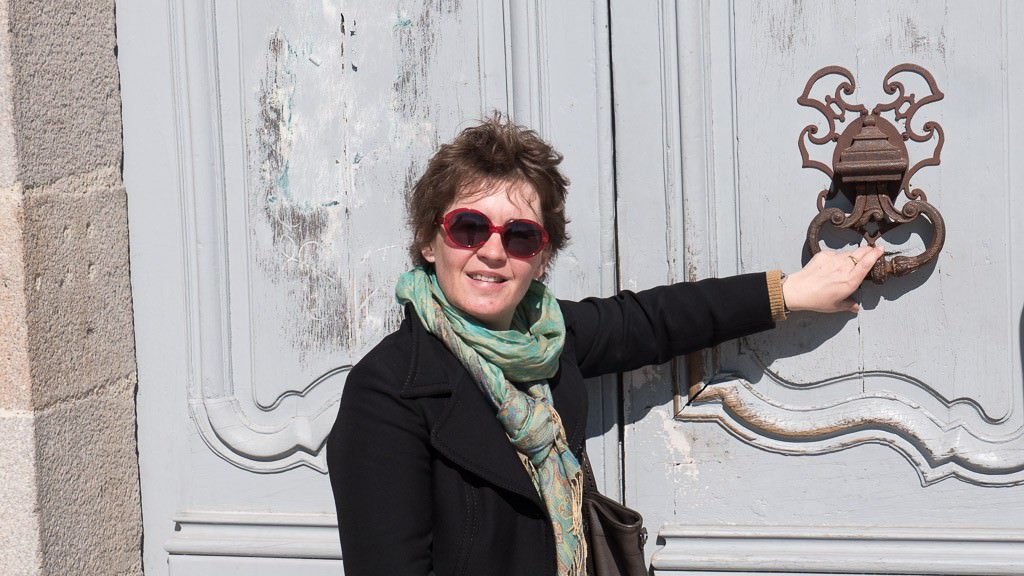 About a decade ago, Time magazine named Nantes as “the most liveable city in Europe.” Having spent a week in Nantes, I can say that I could certainly live there (of course, I was once accused of wanting to live every place that I visited). Nantes seems to have it all — easy access within the city via bicycle paths, pedestrian walkways and public transportation — as well as access to the rest of the world, via the Atlantic Ocean, 30 miles away, or via Paris, a little more than two hours by train.

Moreover, Nantes offers easy access to the countryside and charming French villages along the rivers. Within 15 minutes by bicycle I found myself pedaling alongside pastures and through forests leafing springlike — all along the Loire and its tributaries.

I spent four days exploring the region by bike, and enjoyed every euphoric moment. Within the city are more than 200 miles of bike paths, plus nearly 150 more miles of bike roads in the Loire Valley. Wikipedia notes that the area’s inhabitants make about 2 million bike journeys a day. If you’re at all comfortable on a bicycle, you’ll feel right at home in Nantes. 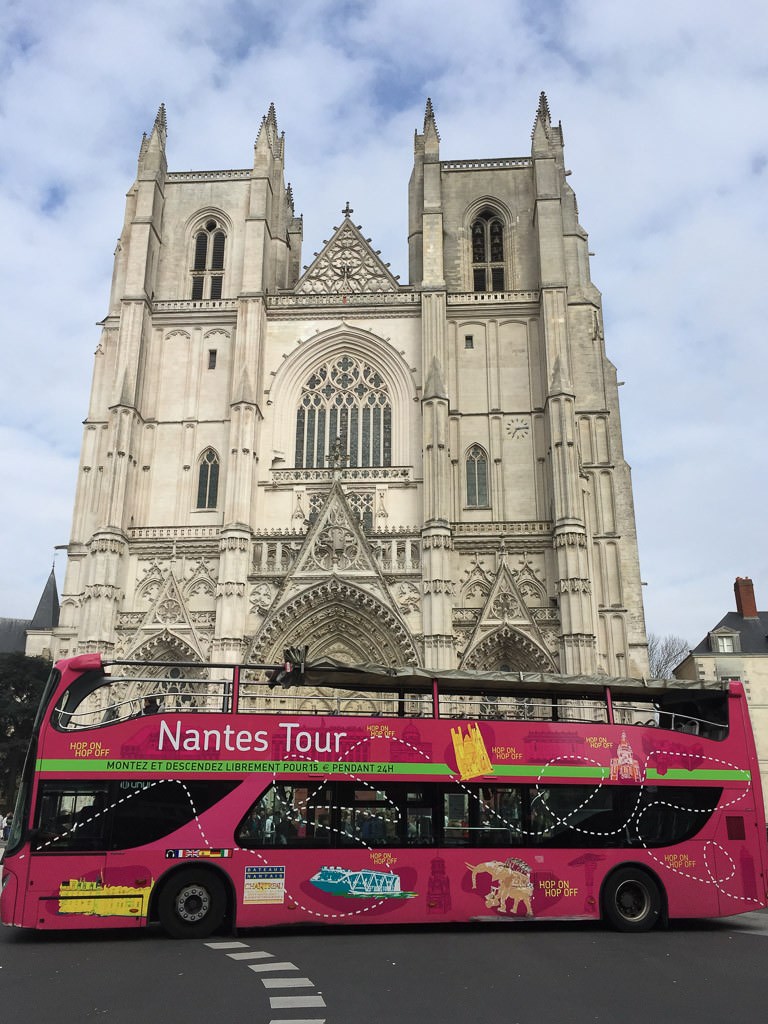 If you prefer less active adventures, you’ll find that Nantes has good restaurants, inexpensive (especially given the strength of the U.S. dollar), good shopping, cultural attractions and plenty of green space. 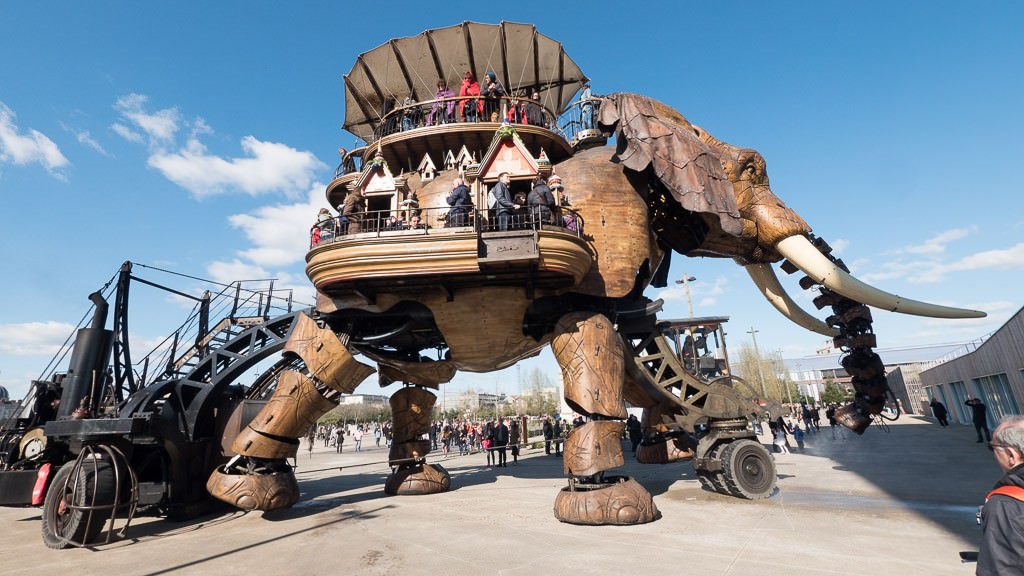 Les Machines, a fantasy world come to life with an oversized mechanical elephant that walks. Wikipedia notes that “the project of Machines de l’île in Nantes aims to promote city’s image and tries to build an identity as a creative metropole of dream and of fantasy.” © 2015 Ralph Grizzle

The Loire and its tributaries cut across Nantes; castles and cathedrals punctuate the skyline. The Dukes of Brittany had their castle here, still a centerpiece of the city, and while Nantes is not within Brittany proper, the city reflects the spirit — and is regarded as the cultural capital — of Brittany.

It was in 850, in fact, that the region was first conquered by Brittany. With subsequent wars and infighting, the Nantes region remained in flux and changed hands for several centuries. Even the Vikings pitched camp here for a brief period during the 8th century. In 1532, however, the duchy of Brittany became part of the French crown lands, effectively unifying Brittany (and Nantes) with France. 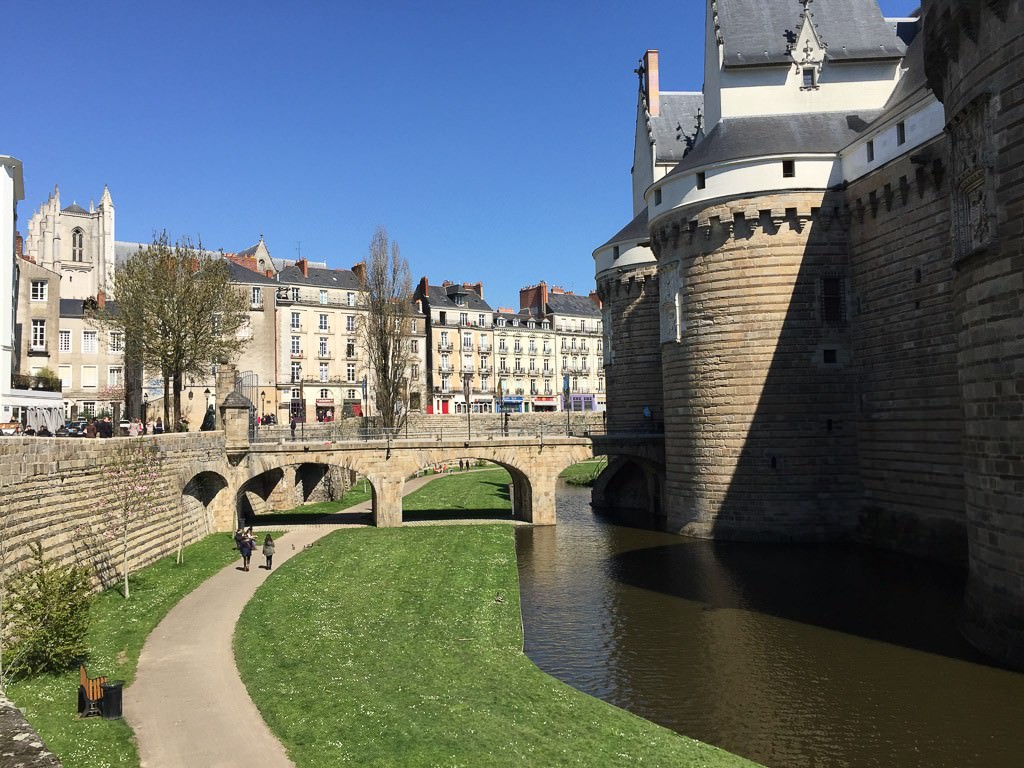 The Castle of the Dukes of Brittany. © 2015 Ralph Grizzle

I toured Nantes with Agnes Poras, a guide who I mistook for being British. Her dialect was impeccably Kentish, thanks to having lived and studied there. She was easy to understand and possessed a wealth of knowledge. Even better, she took me around by bicycle, which allowed us to cover more ground than we otherwise could have by foot.

Our tour of Nantes took us to the key attractions in the city. We saw all of the major sites, which I’ve included in the photos accompanying this post. However, I was particularly intrigued by Nantes’ role in the slave trade. I had no idea before coming here. In the early 1700s, ships from Nantes transported nearly 50 percent of the slaves who were taken across the Atlantic to the Americas. Today, a human rights memorial marks the spot where the ships docked at the quays at île Feydeau. The memorial seems to offers up an apology of sorts for the inhumane acts of which so many were guilty.

You can hear Agnes talk about the slave trade as it relates to Nantes in the podcast below. 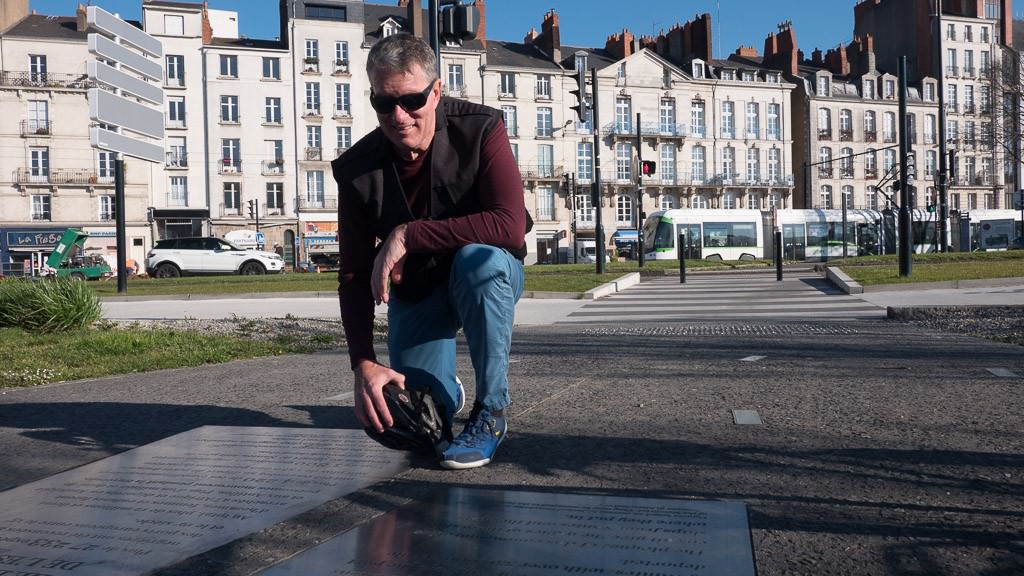 At the Memorial to the Abolition of Slavery. © 2015 Ralph Grizzle 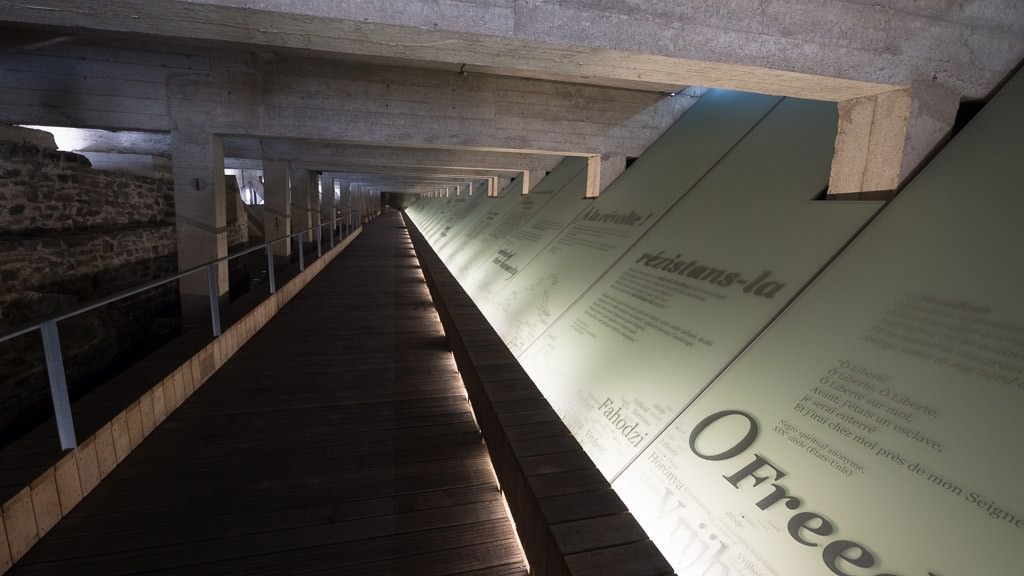 Part of Memorial to the Abolition of Slavery is underground. The idea was to recreate the inside of a ship where slaves might be kept. © 2015 Ralph Grizzle 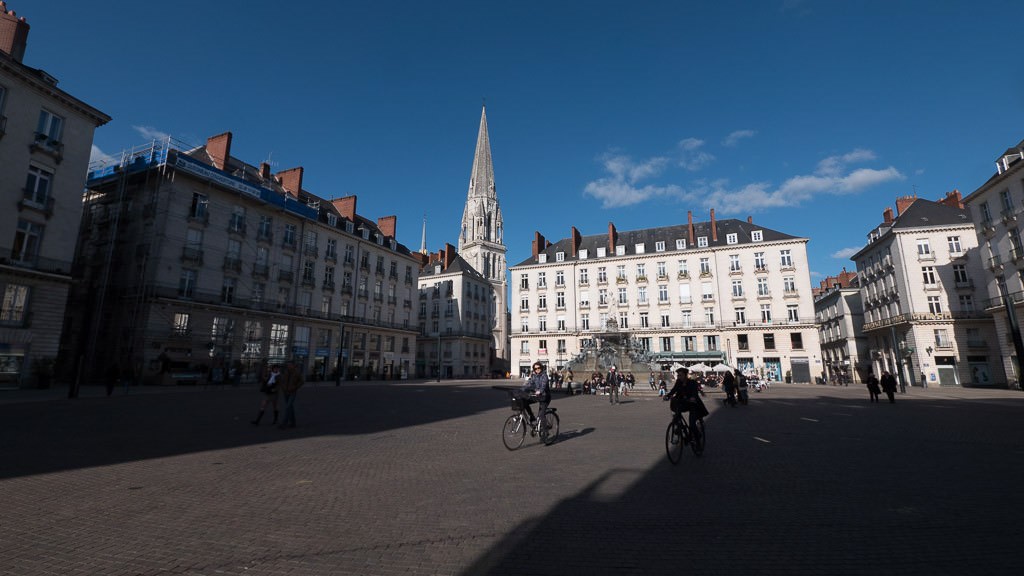 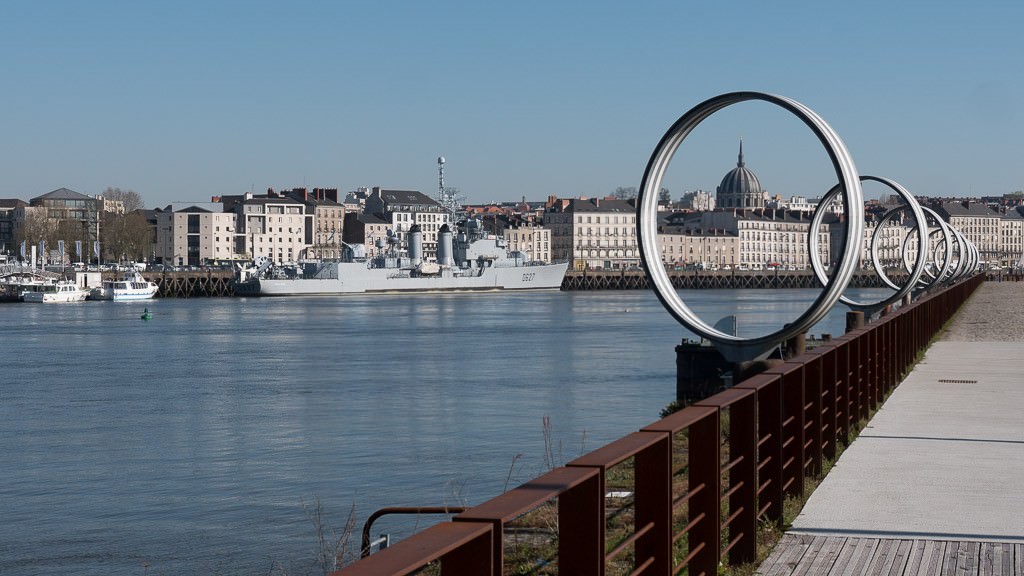 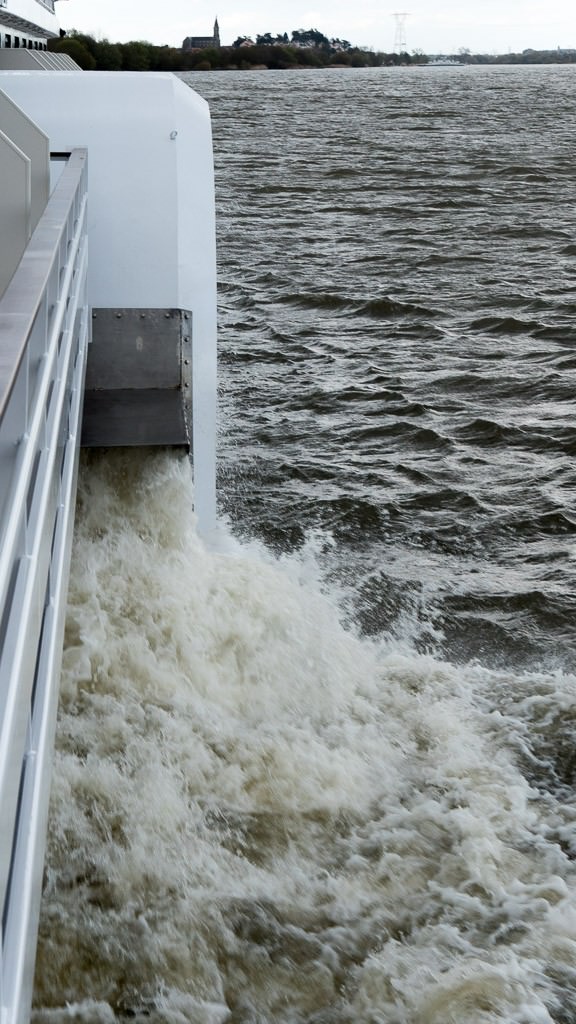 Paddle-wheelin’ back toward Nantes. © 2015 Ralph Grizzle

I enjoy time on the rivers quite a lot. The slow meander of river and the ship’s rhythmic pace lulls me into a state of peace and tranquility. This morning was no exception. We paddled downriver past beautiful landscapes and colorful villages on our way to Saint-Nazaire. I managed to take a break mid-morning, pulling back the curtains to reveal my balcony and watching the river pass from the comfort of my bed. The beds, I should note, are comfortable, and wisely designed so that you can get your luggage underneath for storage. 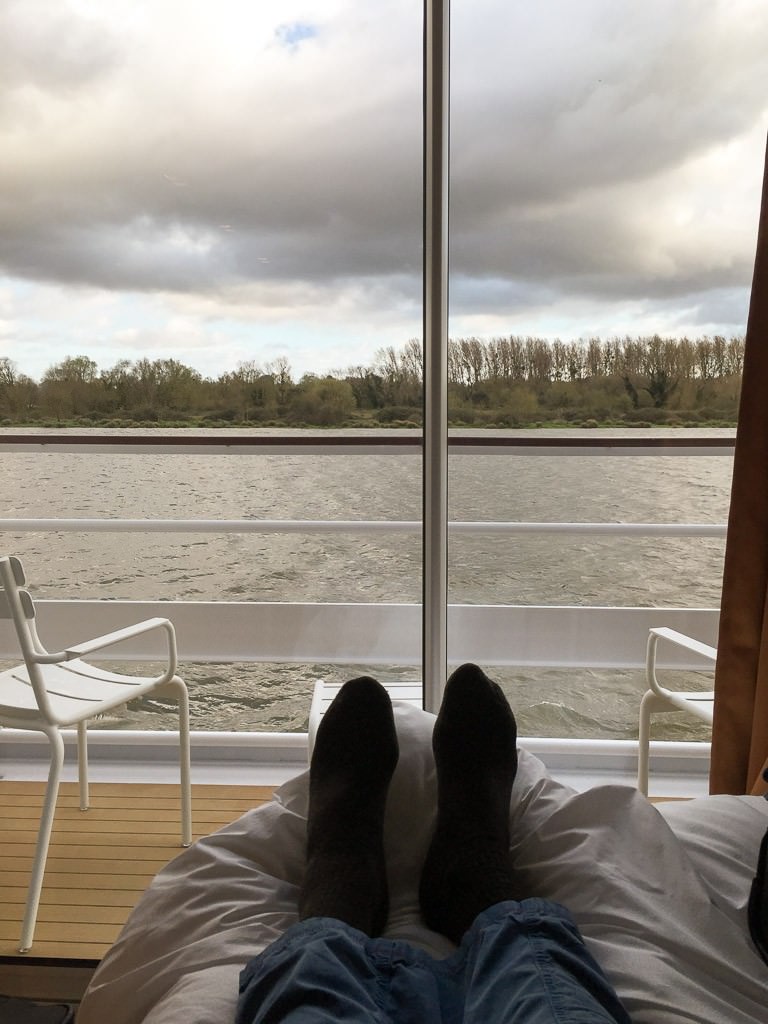 Feet up and relaxing in my stateroom. © 2015 Ralph Grizzle

After about three hours, we reached Saint-Nazaire, where we transited a lock to reach the inner harbor. Once docked, our fellow passengers from the city tour rejoined Loire Princesse. We all had lunch, and at about 3 p.m., headed out for a tour of the shipyard Chantiers de l’Atlantique at Saint-Nazaire.

The historic shipyard built ships such as the SS Normandie and the Queen Mary 2. During World War II, however, German forces occupied the shipyard and made it the base of operations for Kriegsmarine, the Nazi naval war machine. You can still see the heavily fortified bunkers that housed submarines. 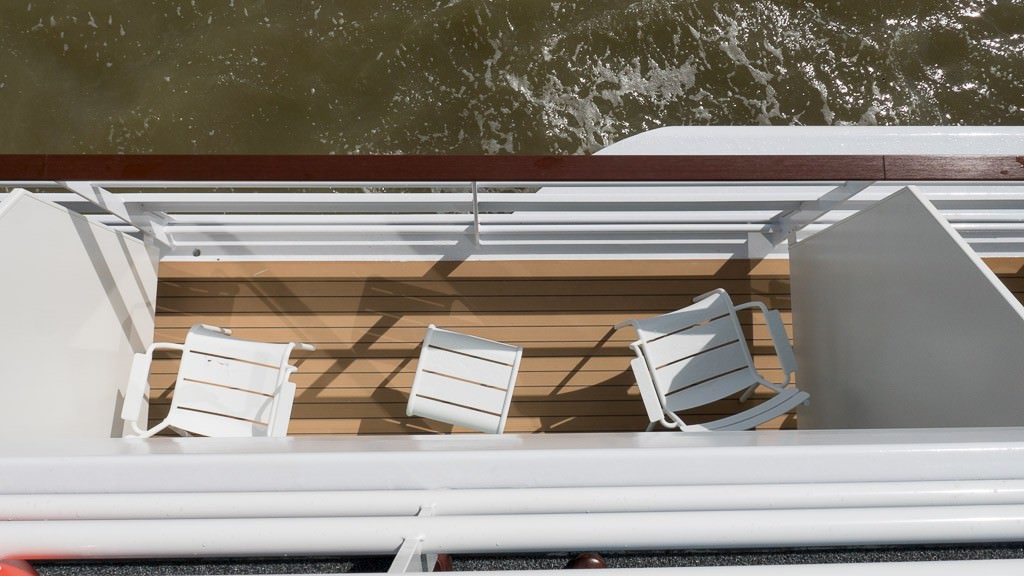 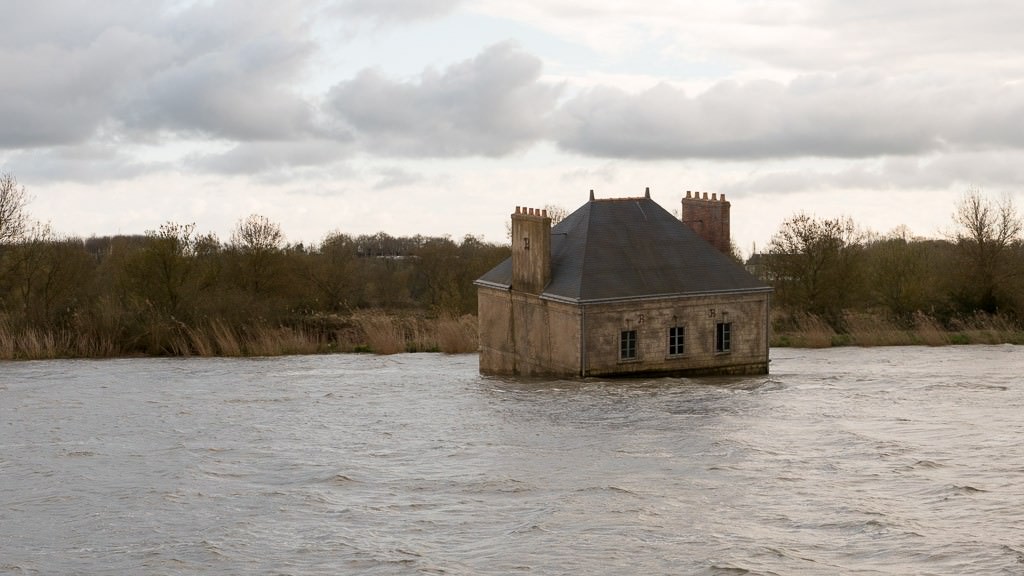 Art installation on the river. Seriously, the house is in the river on purpose. © 2015 Ralph Grizzle 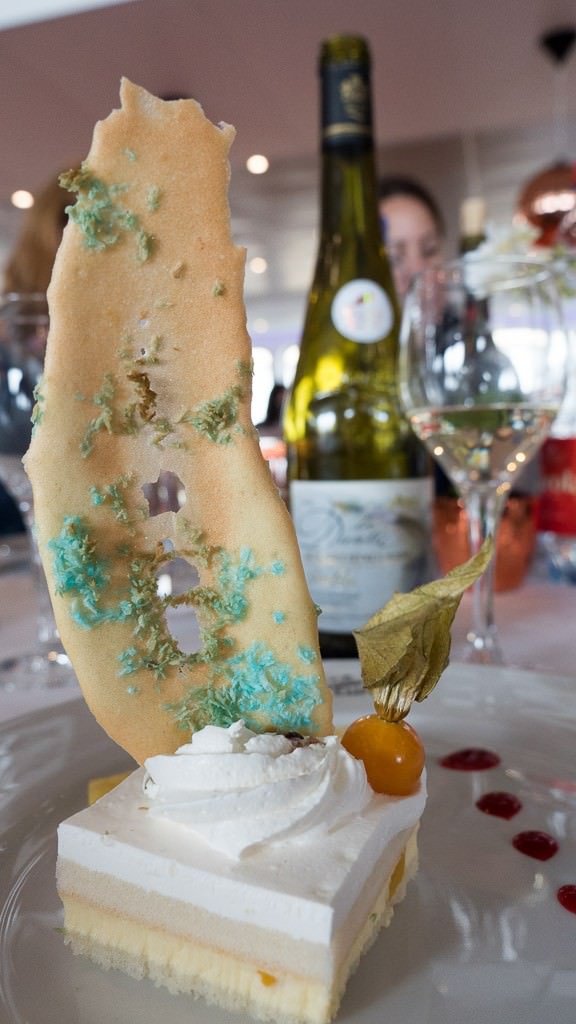 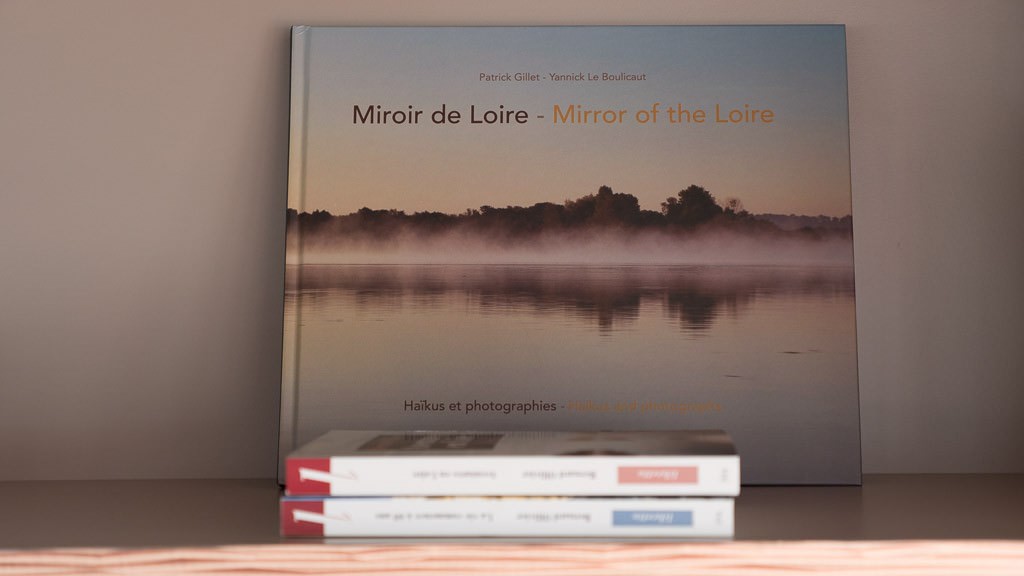 Shortly after 6 p.m. Loire Princesse began to make her way back to Nantes. The complement of the ship gathered in the lounge. Some were enjoying the music, others were using the free WiFi to connect with their families and catch up on emails and social media. All were enjoying complimentary cocktails, me, a glass of sparkling wine before dinner.

Dinner is served one deck below the lounge, with a mix of round and rectangular tables, seating from two to ten, and easily reconfigured for couples or groups. As with lunch, meals are served course by course, beginning with a starter, followed by the main course, then cheese (for dinner only) and dessert. Red and white wines are served, both of French origin, and regionally produced, such as the popular Muscadet from the Loire Valley.

The menus are French-inspired, and the food is quite good.

Not included in the cruise fare are the shore excursions, but this changes in 2016, as CroisiEurope aligns its product to compete with the North American-based river cruise companies.

Tonight we will dock in Nantes and head out early the morning to make our way up the shallow parts of the Loire, where no other river cruisers (with overnight accommodations) have gone before. An exciting day ahead. 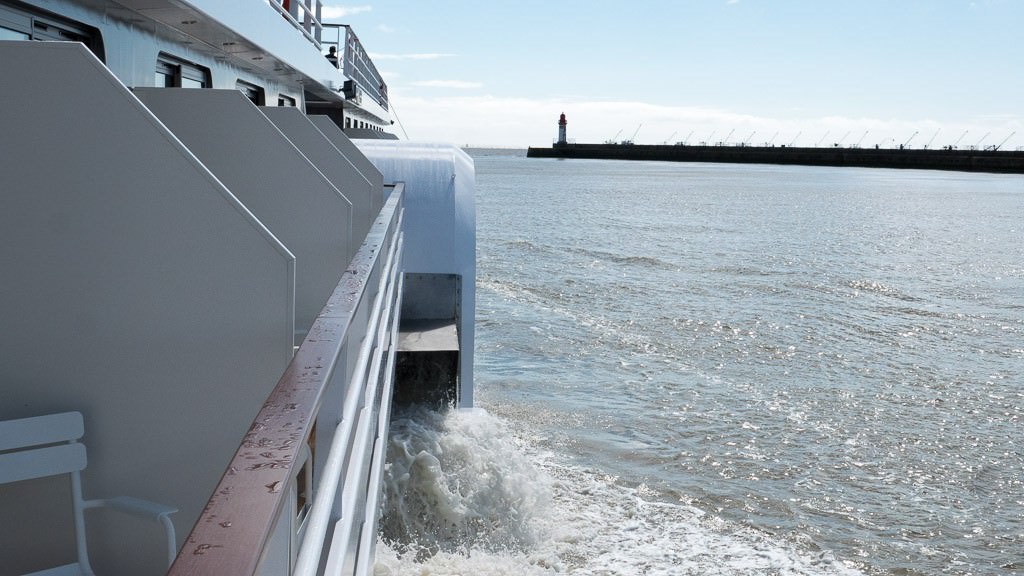 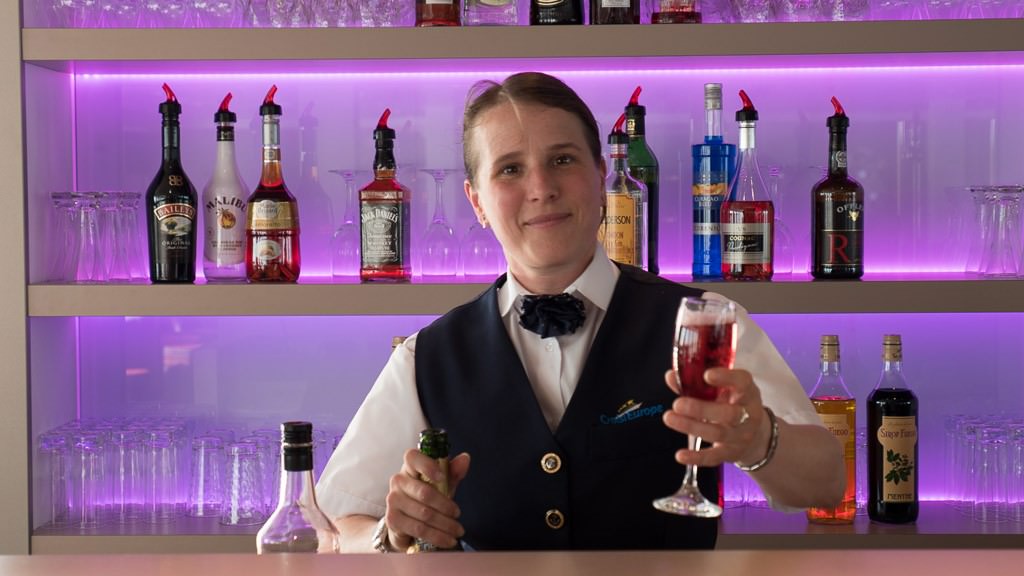 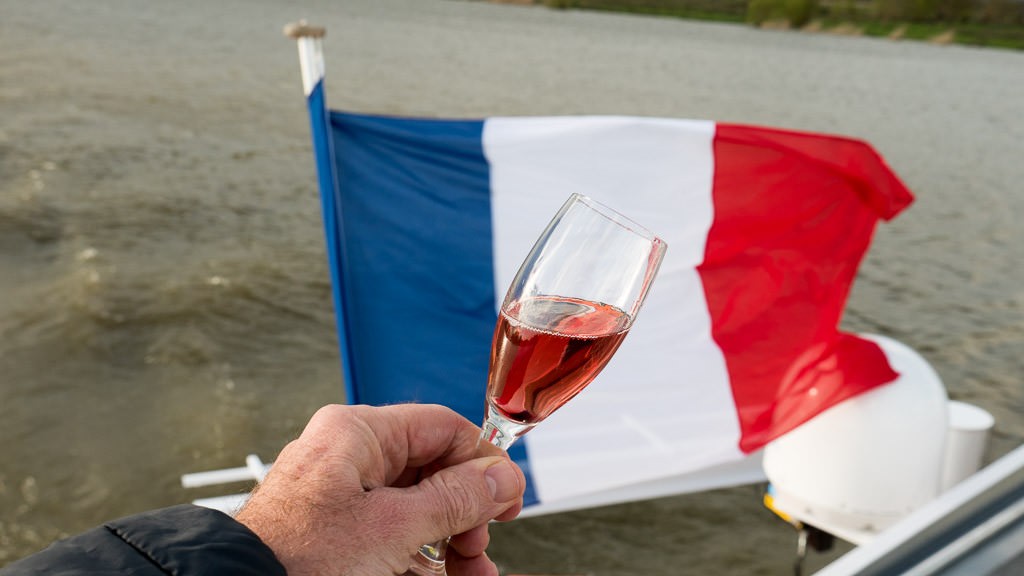 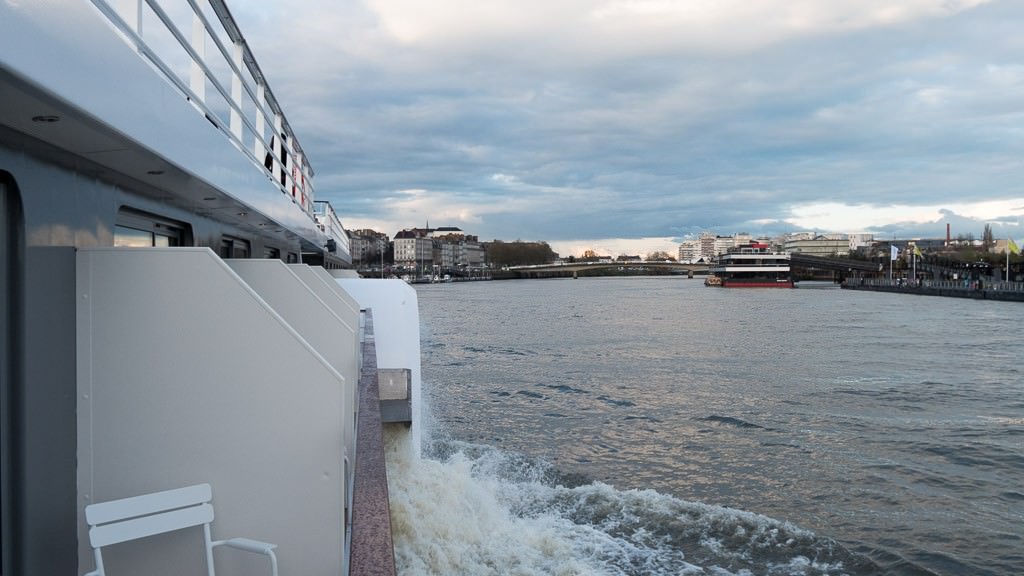 Back toward Nantes and heading up the Loire tonight. © 2015 Ralph Grizzle