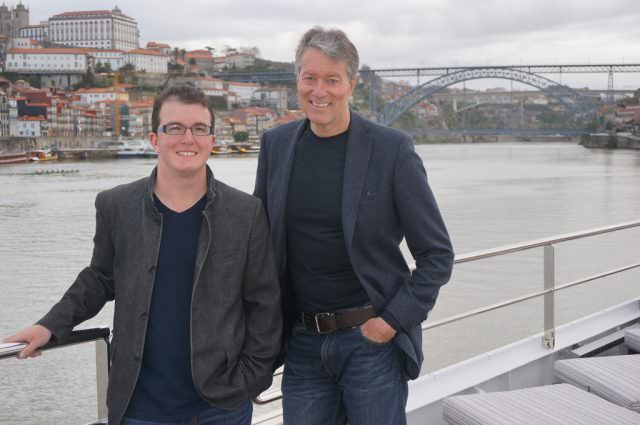 Aaron Saunders (left) and Ralph Grizzle (tall) in Porto, Portugal aboard Viking Hemming, cruising the Douro River. We’ll be reporting in April and May from a series of river cruises in Europe.

Now through the middle of May, Aaron Saunders and I will be reporting from Europe, live from four river cruises. Aaron is already in Amsterdam, ready to cover the naming of 12 Viking Longships. That’s right, a dozen new Longships.

Next week, I’ll fly to Nantes, France to paddlewheel along the beautiful Loire River. Because of its shallow waters, the Loire has never before been accessible by a river cruise vessel with staterooms designed for overnight stays. In other words, I’m going river cruising on a first-ever itinerary on a one-of-a-kind vessel, CroisiEurope’s Loire Princesse.

On April 15, I’ll be on board the new Scenic Jasper. Our seven-day cruise begins in Budapest and ends in Vienna. Scenic is professing to be “Regent” of the rivers. Like Regent Seven Seas Cruises, Scenic includes it all, including gratuities on board and ashore. The so-called “Space-Ships” even feature butler service for all levels of accommodations. See Scenic Jasper’s deck plans.

After that, I take a brief hiatus from river cruising to sail on Viking’s new Viking Star. I board in Barcelona on May 2 and step off in Lisbon on May 8. I’ll cover the preview voyage, and Aaron will cover the naming event in Bergen on May 17. While he’s observing the festivities in Norway, I’ll be stepping of Uniworld’s new S.S. Maria Theresa on a voyage from Amsterdam to Budapest. Check out First Look: Uniworld’s new S.S. Maria Theresa.

You’ll find a link to our river cruise calendar and our voyage reports here.