When she launches on March 26, 2015, S.S Maria Theresa will be the third ship to be based upon the same general design as Uniworld’s highly successful S.S. Antoinette, which was launched in 2011. Last spring, Uniworld took delivery of the S.S Antoinette’s first sister ship, the gorgeous S.S Catherine. The two newest vessels are similar but have several distinct differences.

A Look At The Sister, S.S. Catherine 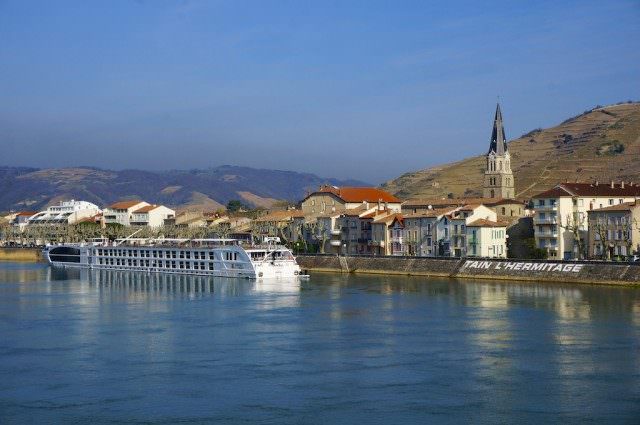 I loved the posh feeling of S.S. Catherine when I sailed on her last year. A stunningly sophisticated vessel, the S.S. Catherine will no doubt appeal to anyone who has an eye for luxury (those who cruise Silversea, Seabourn, Crystal and the like) and the finer things in life (free-pouring champagne, gourmet cuisine, butler service and an all-inclusive environment). And as S.S. Catherine sails along the Rhône and Saône, the S.S. Catherine also appeals to Francophiles. C’est vrai.

The main dining room, in fact, resembles a fine French bistro, and the dining experience — particularly the quality of the cuisine — has a certain French flair. Breakfast each morning featured French yogurt, French-press coffee and croissants that were better than I wished they would have been, but then who is counting calories when we had complimentary bicycles to burn off the excess from a little morning decadence?

In France, champagne flows freely on S.S. Catherine (Sekt in Germany, Prosecco in Italy — all true to the sailing region where Uniworld vessels are operating), and as of last year, all wine and spirits flow at no extra charge as Uniworld is now all-inclusive. 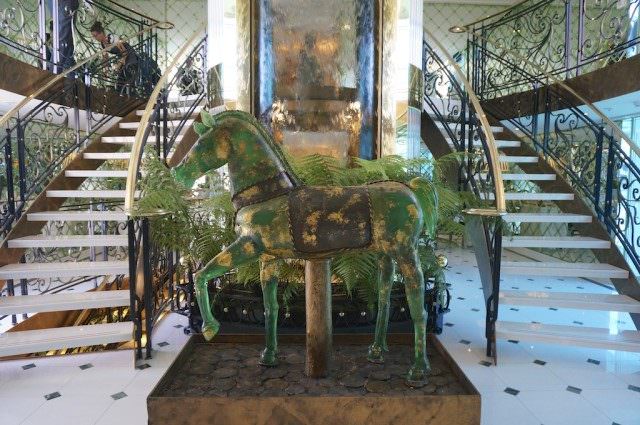 S.S. Catherine’s atrium with its Murano glass horse and waterfall background and stairs descending on both sides. © 2014 Ralph Grizzle

Suites naturally come equipped with white-gloved butlers wearing tuxedo jackets with tails. They serve guests in Catherine’s six suites, ranging from 305 square feet to 410 square feet, all done in different styles. Suites also come with a one-per-person complimentary in-suite spa treatment and a mini-bar and bar set-up. No matter what category you book, all accommodations on S.S. Catherine feature handcrafted Savoir of England beds — among the most comfortable beds I’ve ever slept on.

Learn more about Uniworld’s S.S. Catherine and my four all-too-brief nights aboard last year at the posts below. 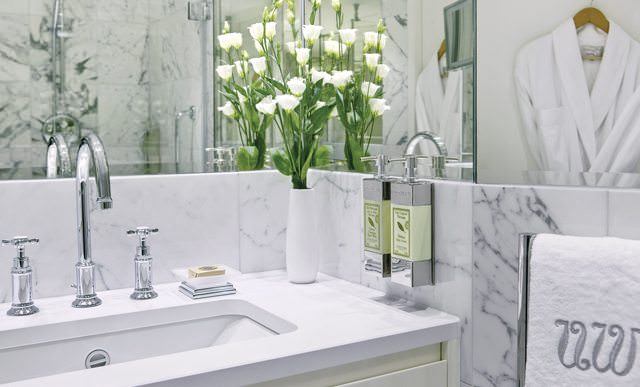 The Fanfare & The Fantasy

It is an intriguing invitation: Experience the fantasy of an 18th-century floating palace. That’s how Uniworld Boutique River Cruise Collection is positioning its newest vessel, the S.S. Maria Theresa.

Named for the Archduchess of Austria and the Empress of the Holy Roman Empire, the new river cruiser will feature classical Baroque interiors and a three-tiered lobby dominated by a sweeping marble staircase with a wrought-iron, hand-gilded balustrade, and royal crown detailing. You can practically see the Duchess herself descending those stairs.

The lobby’s shimmering walls are paneled top to bottom with antique mirrors. The focal point of the grand entranceway and the centerpiece of Uniworld’s newest ship is a regal ten-foot high original oil on canvas painting of the beloved ruler of the Habsburg Empire, who reigned as the only female ruler of the dynasty from 1740 to 1780.

With all of the regiment and ornamentation, it would be hard to mistake a Uniworld vessel for one belonging to Viking, AmaWaterways, Avalon or Tauck. Uniworld’s interior design components certainly are ambitious, leaving little unadorned. Whether you like that or dislike it, Uniworld does indeed take its guests on flights of fantasy. Consider the wording in a recent press release: A hand-painted Tromp L’Oeil-inspired mural and glittering Venetian Murano glass chandelier grace the ceiling evoking feelings of walking through the great hall of Maria Theresa’s 18th-century Schönbrunn palace.

Throughout the S.S. Maria Theresa, royal blue, antique golds, shades of white, and soft gray colors that were popular during the 18th century dominate the design elements. Other features include mirrored or silk-clad walls, antique white wood paneling, carved twisted columns, Habsburg coronets hand-painted with 22-carat gold leaf, and custom furniture pieces, made by master craftsmen. This intricate handiwork has been painstakingly accomplished by a team of skilled artisans from around the world, including ceramicists and specialist painters who were commissioned to ensure the period was recreated with authenticity, luxury, passion, and detail. 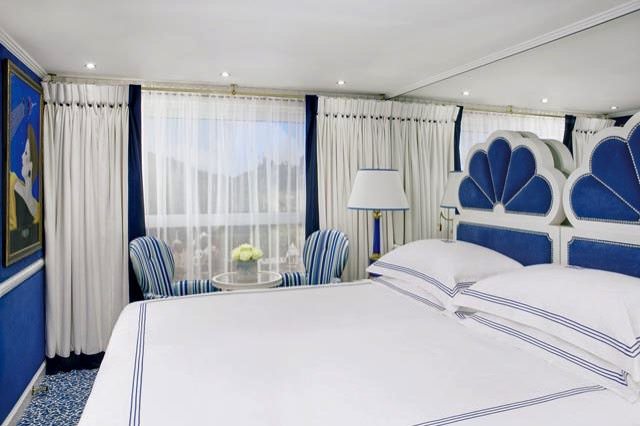 “Our aim is to transport each guest into experiencing the fantasy of living in an 18th-century Baroque castle,” says Toni Tollman, who led the design team along with her mother, the legendary Beatrice Tollman, president and founder of Uniworld’s sister company, The Red Carnation Hotel Collection . “We designed the S.S. Maria Theresa to take our guests on a journey back in time with an onboard atmosphere and style seamlessly integrated with the history and architecture of the very places they will visit onshore, as well as provide them with the latest in luxurious comfort and technology, of course.”

In the Habsburg Salon, where guests can relax with a book or enjoy afternoon tea, are five murals depicting the 18th-century Austrian countryside hand-painted by specialist painter Croxford and Saunders. A selection of hand-picked antiques and inspirational paintings from different artists of the period are certain to evoke conversation. Other public areas include the authentic Viennese Café, where guests can linger for hours enjoying local specialties, such as classic Austrian sachertorte, Würstl (Viennese sausage), and famous Viennese coffee. Uniworld’s stylish signature Leopard Bar designed with elegantly muted colors and intricate mosaic tile murals created by the famous South African mosaic tile artist, Jane du Rand, is an enchanting and playful venue to have a drink or dance the night away.

The S.S. Maria Theresa will be christened in Amsterdam on March 26, 2015 by its godmother, Princess Anita von Hohenberg, a direct descendent of Maria Theresa and great-granddaughter of Archduke Franz Ferdinand and Duchess Sophie von Hohenberg. Uniworld’s S.S. Maria Theresa will set sail on her inaugural voyage on March 28 through the heart of Maria Theresa’s vast former empire on Uniworld’s “European Jewels” voyage from Budapest to Amsterdam. She will also serve the line’s popular ” Tulips & Windmills,” “European Holiday Markets,” and “Grand Christmas & New Year’s Cruise” itineraries.