You are here: Home / Cruise Companies / AMAWATERWAYS / Bicycles & Beer, Wine & Chocolate, Myanmar & Much More On AmaWaterways: An Interview With The Founding Couple The new AmaPrima making its way to Vienna, Austria. In this episode, we learn more about AmaWaterways, founded in 2002. I talk with Kristin Karst, the company’s executive vice president, and Rudi Schreiner, president. Both are co-owners with a third travel industry legend, Jimmy Murphy. © 2013 Ralph Grizzle

In this Avid Cruiser Audio Podcast, I talk with two people who over the past 10 years have become good friends. We’ve cruised together many times, and I love their product. I’m talking about river cruising on AmaWaterways.

At a cruise convention in Miami this past March, I sat down with Kristin Karst and Rudi Schreiner, certainly two of the happiest people in the cruise industry. Their happy people simply by their dispositions but the success of river cruising hasn’t hurt matters. They are riding a wave of unprecedented tourism growth on rivers worldwide. 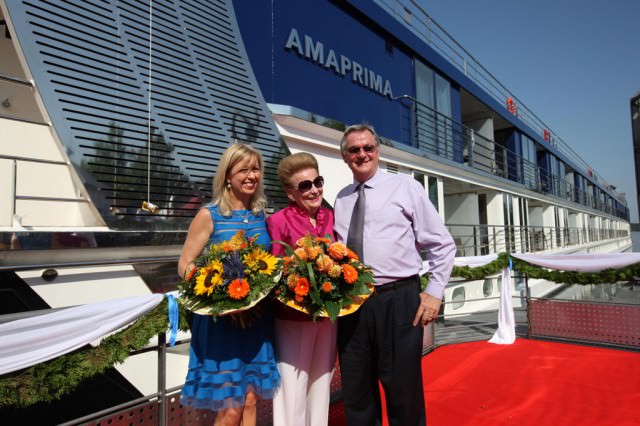 In this interview, Kristin and Rudi discuss their new river cruise in Myanmar, which begins in November 2014 as well as the ever-changing face of the river cruise industry, represented most vividly by the vessels themselves, which can be described as “incomparable” to those of a decade ago, Rudi says.

Rudi tells us the staterooms are getting larger than they were on river cruise vessels 10 years ago. And so are the options. His European ships now feature two restaurants, for example. We dined at the alternative dining venue on AmaPrima last summer. Situated aft, the restaurant known as Erlebnis gave us a good evening of fine dining and some great wines.

AmaWaterways’ vessels also feature 30 bicycles on every ship, as well as gyms. River cruisers are more active than they were a decade ago, Rudi says, adding that river cruising can be exceptionally active for those who want it.

Theme cruises are also becoming more prevalent than in years past, Kristin says. “We have 22 wine cruises this year as well as a beer cruise in 2015,” she says.

Check out our AmaWaterways ship reviews and learn about some of the destinations you can visit when traveling on AmaWaterways.