You are here: Home / Cruise Companies / Live From the River: Amsterdam

Going Dutch for a Day in Rainy Amsterdam 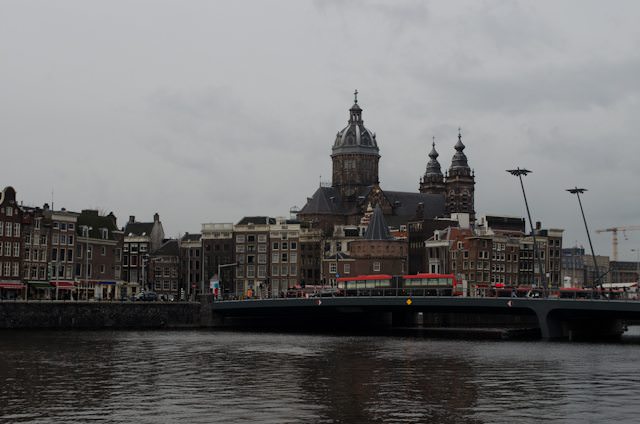 I’ve decided the current weather in Amsterdam must be punishment for my unseasonably warm first visit here last March. The window of my hotel room has become a veritable river in the past hour, with heavy waves of rain pelting it relentlessly. 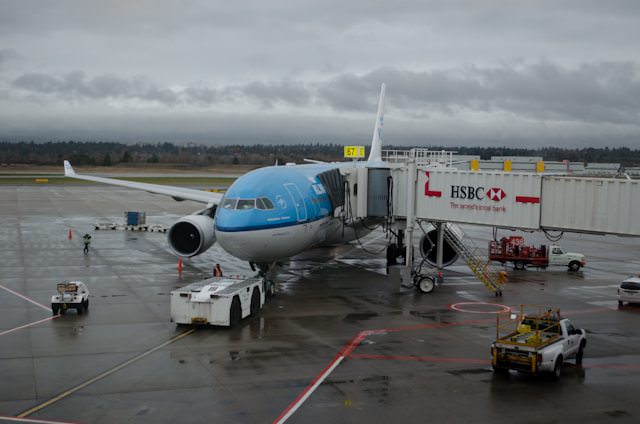 KLM 682 to Amsterdam waits at the gate in Vancouver. Photo © 2012 Aaron Saunders

It was a relatively nice day here when my KLM flight from Vancouver touched down just after 10:30 a.m. local time at Schiphol. Rather than fly all the way to Budapest, Hungary in a single day to embark Viking River Cruises’ Viking Freya, I opted to fly in early to spend a day in Amsterdam before continuing on to Budapest tomorrow morning. 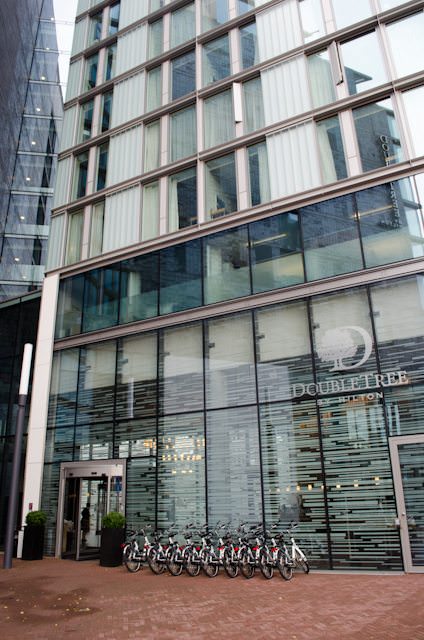 The Doubletree Amsterdam is bright, modern, and superbly located to both Amsterdam Centraal and the heart of the city itself. It’s also only a block from Passenger Terminal Amsterdam, the city’s cruise and river cruise port. Photo © 2012 Aaron Saunders

Because my time here is, well, limited, I elected to stay at the Doubletree by Hilton Amsterdam Centraal Station which as the name implies is conveniently located to Amsterdam’s Centraal Station.

Here’s the lowdown: After collecting my baggage from Schiphol, I used one of the ticketing machines in the baggage claim area to purchase a one-way fare for the Fyra Highspeed Express train to Amsterdam Centraal. There’s also a slower, InterCity train, so be careful to purchase your ticket for the right one. 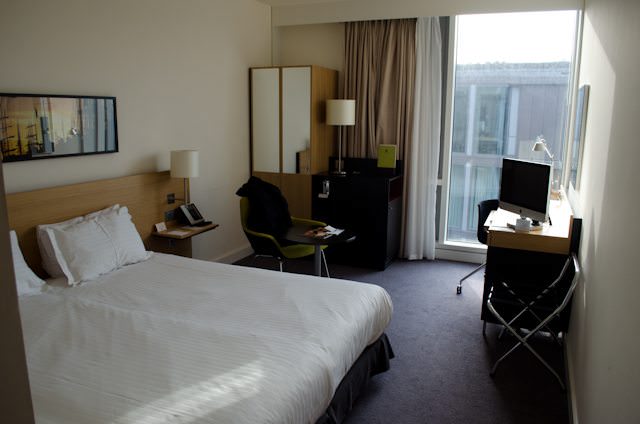 I boarded the train at the Schiphol platform at 11:48 a.m. By Noon, I was stepping off the train at Amsterdam Centraal, and by 12:15, I was checked into my hotel room. Simple and painless: just what I was looking for after a long day of flying.

The room itself is quite nice; nothing fancy, but then again, I booked for its convenience. Still, it’s tough to argue with an in-room Apple iMac; free bottled water and complimentary internet access. 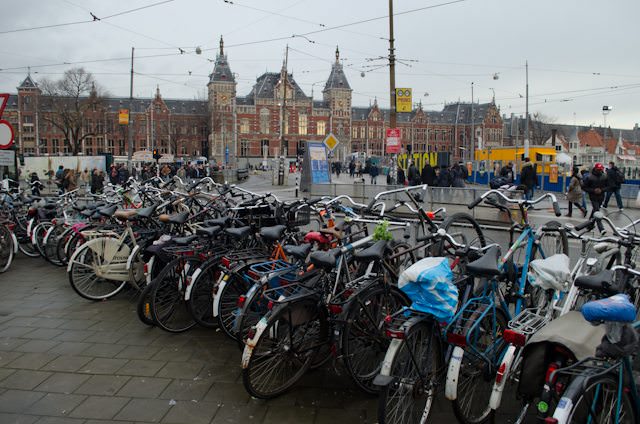 Bicycles and Amsterdam go hand-in-hand. These are pictured outside the classic facade of Amsterdam’s Centraal Station. Photo © 2012 Aaron Saunders

The rain held off for about an hour during my initial explorations. Having been here in March, I knew my way around Amsterdam’s historic city center, but I wanted to visit Anne Frank’s House at Prinsengracht 263. It was here that Anne Frank and her family spent two years of their lives in hiding in the “Secret Annexe” until being given up by an anonymous tipster in 1944. Of the entire family, only Anne’s father, Otto Frank, would live to see the end of the war. 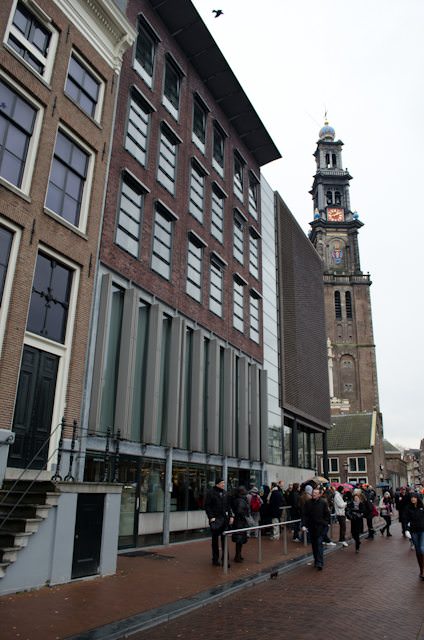 Even in the cold and rain, the legacy of Anne Frank and the house she and her family were secluded in, continues to resonate with visitors to Amsterdam. Photo © 2012 Aaron Saunders 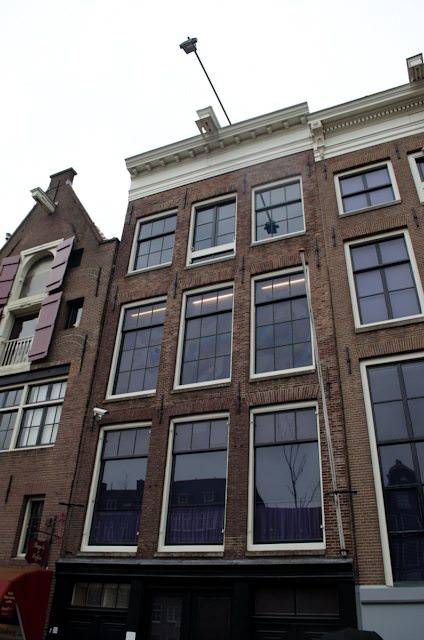 The facade of the actual house Anne Frank was housed in. The ‘Secret Annexe’ was located at the rear of the building. Photo © 2012 Aaron Saunders

I knew I was in the right place long before the house physically came in to view: A massive line stretched around the block and the newer interpretive centre. It was at this moment that the skies decided to open up and make the decision for me as to whether I should join the queue. While I will have to wait for another visit to go inside and properly explore this historic location, I was pleased to have had the opportunity to see it – even if only the façade – in person. 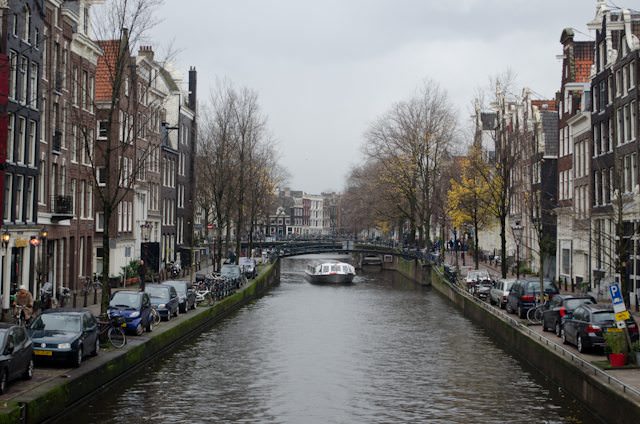 A canal boat still soldiers on, even in the cold, damp rain. Photo © 2012 Aaron Saunders 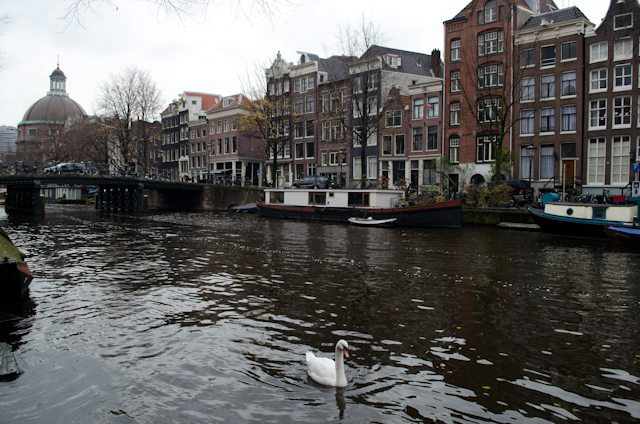 By now the rain was coming down en force, so I made a beeline for the Leidseplein, a central square that’s commonly known as being an anchor for an enormous Apple Store. Here, a skating ring was erected for the winter season, along with a few stalls. While it wasn’t the sprawling Christmas Markets they have in Germany and Austria, the skating rink was popular with families. 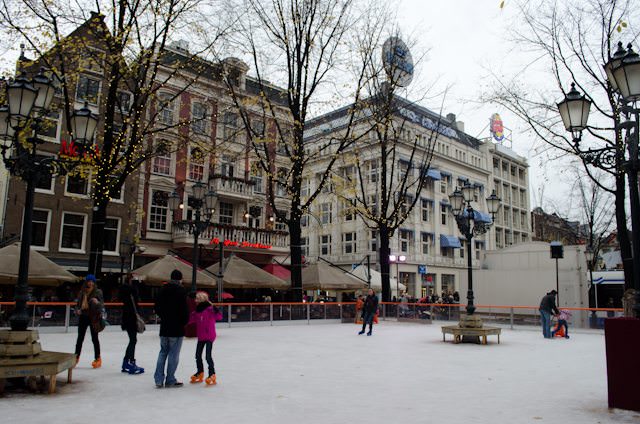 Skating on the ice at the Leidseplein. Photo © 2012 Aaron Saunders

With the rain only intensifying and night quickly overtaking Amsterdam, I decided it was time to head back to the hotel, strolling along Leidsestraat past the Koningsplein and through the city’s vibrant Red Light District, which was still a hive of activity despite the worsening weather. If you’ve never been to Amsterdam, you have to stroll the Red Light district, if only for its uniqueness. 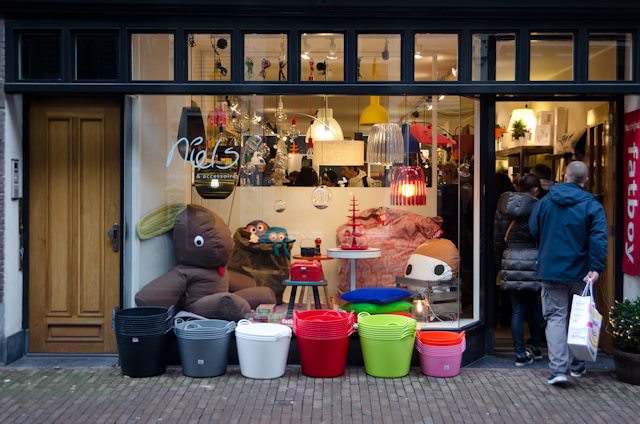 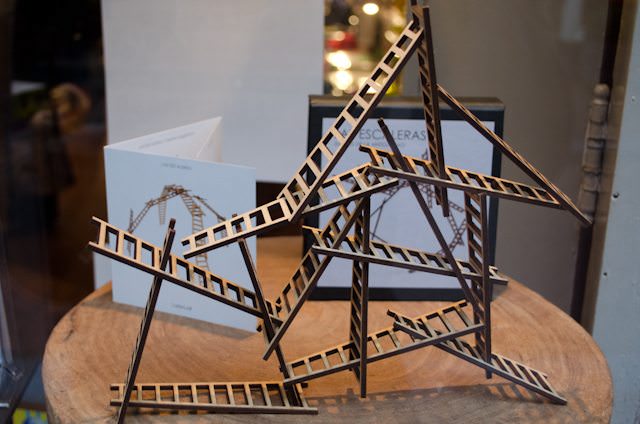 Here’s what it’s like: On one street, you have Amsterdam’s famous (or infamous) “Coffeeshops,” or “pot cafes.” One street over, scantily-clad girls are dancing in windows framed with neon-pink lighting, enticing passersby with their offerings.

On the next street, it’s like stepping into Hong Kong, with ducks hanging upside down from the windows of shops. This small segment of Amsterdam is truly eclectic, drawing a mix of tourists and locals alike, from the young to the old, to couples to families with grown children. 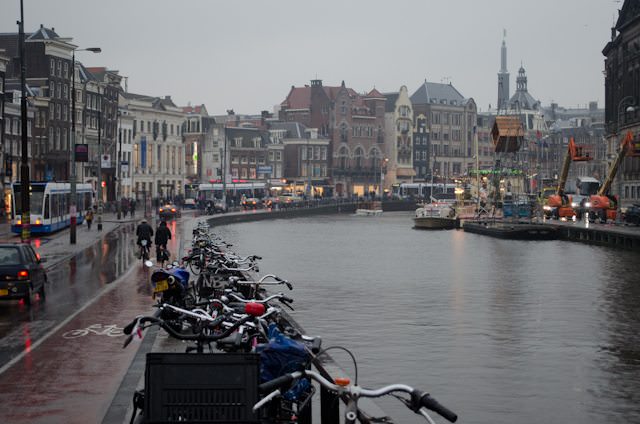 My time here was short, and the weather didn’t treat me nearly as well as it did back in March. But Amsterdam remains one of the most vibrant European cities I’ve ever visited. It’s a city with no equal; even the most basic attempts to compare it fall flat. It defies classification, yet warmly welcomes visitors. People zip by on bicycles and scooters; trams whirr softly past, and the occasional train can be heard pulling into Centraal station. 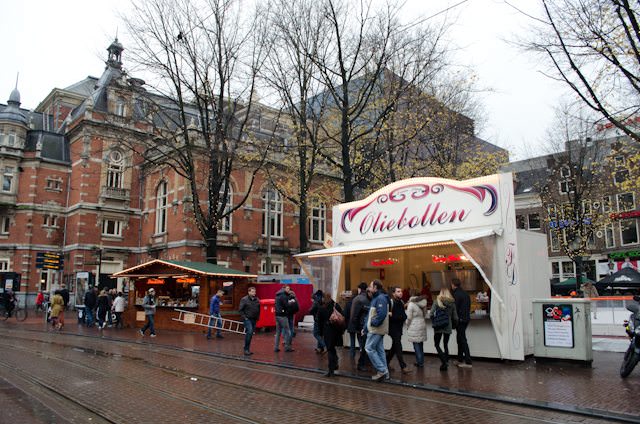 Early tomorrow morning, I’ll board the Fyra high-speed train back to Schiphol, bound for Budapest and the Viking Freya. But I wish I could have stayed here longer; my one day in Amsterdam proved my assessment of my first two days in Amsterdam back in March was spot-on.

Amsterdam captured me with its magic. Should you encounter the city in your travels, it will entrance you, too. 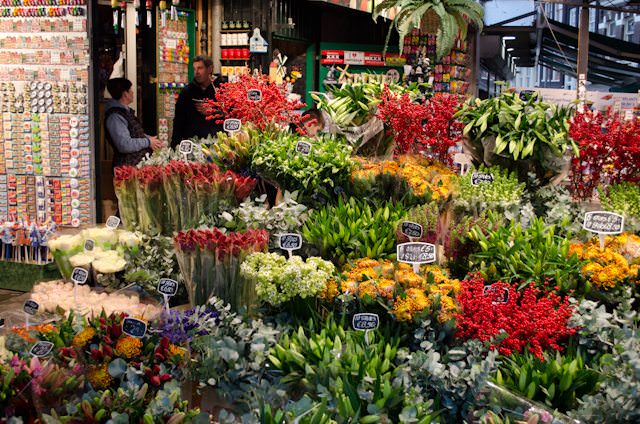 It may be December, but Amsterdam’s famous Tulips can still be purchased. Photo © 2012 Aaron Saunders