You are here: Home / Cruise Companies / A Bridge Too Far: Viking Odin Two Inches Too Tall, Will She Make It? 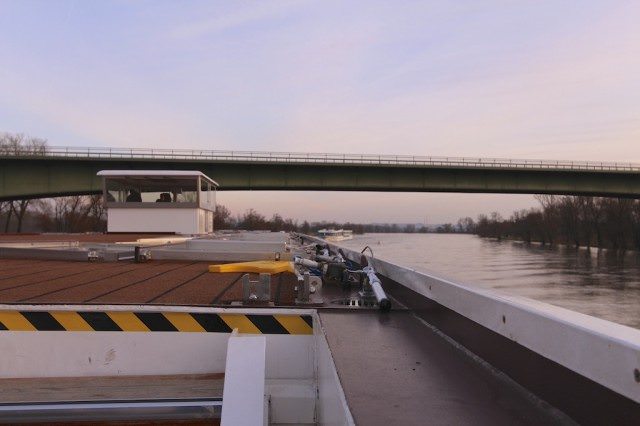 A bridge too low. Seasonal high water and low bridges on the Danube combine to make navigation challenging. © 2012 Ralph Grizzle

At 8 p.m. last night, Viking Odin began to proceed upriver from Deggendorf, Germany, toward the Main-Danube Canal. We were running behind schedule thanks to Mother Nature. Rainfall and melting snow had raised the Danube’s water levels, creating navigational challenges.

At around 10 p.m., we arrived at a bridge that was 5cm (roughly 2 inches) too low for us to pass under – or more accurately, high water volume from the melting snow and rain had raised the water levels so that Viking Odin was 5cm too tall to pass under the bridge.

The captain and crew did all that they could do to lower the height of the ship above the waterline – filled the vessel with fuel and water, topped off the ballasts, immersing the underbelly of Viking Odin 2 meters (just over six feet) below the waterline.

The last report indicated that the water level was receding. As of 2 a.m. and several attempts, we were unable to pass. Would we make it under the bridge and to Nuremberg for perhaps the best Christmas Market yet? Stay tuned.