You don’t really hear a lot about the Elbe River. It’s not as well-known as the Main, nor does it have a snappy waltz composed in its name like the Danube. But the banks of the Elbe are home to some of the most unique and impressive cities and towns in Germany and the Czech Republic, which is why Viking River Cruises‘ Elegant Elbe itinerary is our River Cruise of the Week. 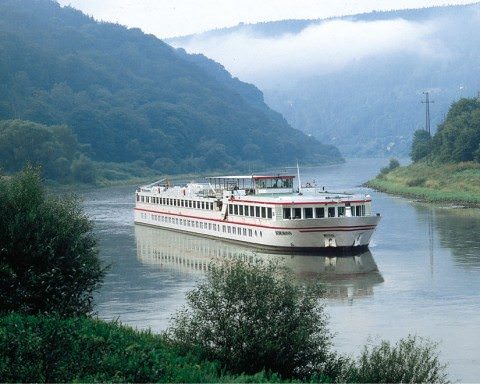 Departing between March and November 2012, guests will sail aboard the intimate Viking Fontane and Viking Schumann on an eight-day river cruise from Magdeburg, Germany to Melnik, Czech Republic. This particular itinerary also includes a full day’s worth of exploration in historic Berlin, with its iconic Brandenburg Gate and reconstructed Reichstag; and a visit post-cruise to medieval Prague.

When you join your ship in Magdeburg, you’ll likely be treated to a spectacular sight at sailaway: the Magdeburg Water Bridge. Opened in 2003, it’s the longest aqueduct in the world, allowing shipping traffic to pass over of the Elbe River. Get your cameras ready; it’s not every day you see ships pass over of your own ship!

After that stunning departure, it’s on to some of the premiere cities in Europe. The full itinerary:

Fully refurbished in 2010 and 2011, Viking Fontane and Viking Schumann carry just 112 guests in 56 staterooms, eight of which feature French balconies. These new French balcony staterooms come in at a very comfortable 200 square feet, and are located on the ships’ Upper Deck. 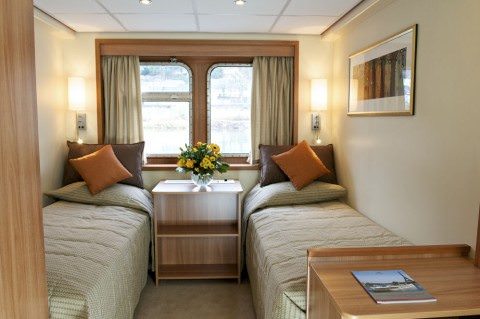 But even standard staterooms feature full outside views of the beautiful Elbe, and both ships feature a full sun deck and plenty of room to relax in the forward-facing observation lounge. Panoramic views, good drinks and great service are all on offer here, making this room the “must-be” spot aboard either ship.

One deck down, the ships’ comfortable dining room serves up breakfast, lunch and dinner. Bottled water is replenished daily in staterooms, and Viking Fontane and Viking Schumann even feature free onboard wireless internet access that lets passengers tell friends and family about all the things they’ve experienced. 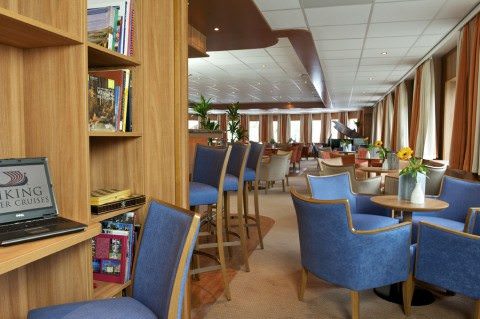 The Library aboard Viking Schumann is also connected to the main lounge. Photo courtesy of Viking River Cruises

So if you’ve done the Danube and sailed the Main, or if you’re just looking to explore Europe for the very first time, look no further than Viking River Cruises’ Elegant Elbe.