You are here: Home / Destinations / Tauck Christens Its Newest Treasure

This past week was a momentous one for Tauck River Cruises, which took delivery of its newest river cruise ship, the brand new ms Treasures. 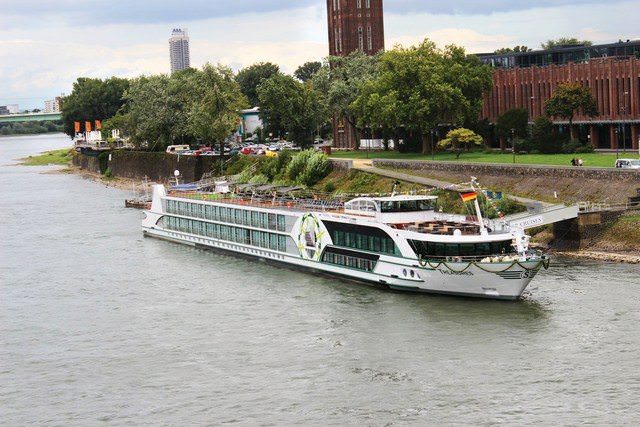 Commenting on the company’s newest acquisition, Tauck spokesman Tom Armstrong echoed the views of Tauck’s passengers when describing the new ship, stating that destination and passenger comfort were key areas for the line.

“We don’t want people to feel compelled to sign up for a ship because it has a rock-climbing wall or some such thing,” said Armstrong.

The new ms Treasures is a near-sister to the line’s existing Swiss Emerald, Swiss Sapphire and Swiss Jewel. Eighty-five percent of staterooms feature full floor-to-ceiling windows, and passengers can look forward to even more stateroom space than ever before on Tauck vessels, thanks to staterooms that range between 150 to 183 square feet in size.

One feature that will be unique to the ms Treasures is a silver “Peace Dollar” that was recently welded into the ship’s hull. In a tradition believed to have originated with ancient Roman seafarers, a silver coin was often placed in a ship’s keel during construction to assure good fortune. Silver Peace Dollar coins were issued in the 1920s to commemorate the end of World War I.

In a nod to Tauck’s own traditions and heritage, the Peace Dollar affixed to the hull of the new ship was minted in 1925 – the same year that Arthur Tauck Sr. launched the company and brought the very first Tauck guests on a guided journey through New England.

For more information on Tauck River Cruises and the new ms Treasures, check out our comprehensive line and ship overviews right here on River Cruise Advisor.