AMAWATERWAYS recently announced details of its new specialty theme cruises, due to set sail this summer and fall. Featuring specially tailored shore excursions and complimentary onboard programming, these voyages highlight two distinct areas of interest: “In Celebration of Wine” and “Jewish Heritage.” 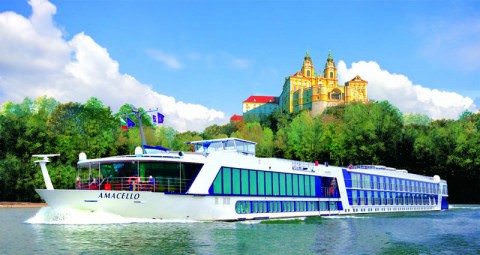 Guests sailing with AMAWATERWAYS this summer will have the opportunity to learn more about wine and Jewish heritage. Photo courtesy of AmaWaterways.

In Celebration Of Wine

Available on select Vineyards of the Rhine and Mosel, Romantic Danube, Enchanting Rhine and Europe’s Rivers and Castle itineraries during October and November, “In Celebration of Wine” itineraries were designed to coincide with the traditional harvest time in Europe. These voyages will showcase the renowned wine-producing regions along the Rhine, Mosel and Danube rivers.

Complimentary wine tastings and excursions to historic vineyards and cellars complement onboard lectures featuring hosts such as Anthony Dias Blue, one of the most influential wine personalities in the United States. Additional speakers include British wine critic Jilly Goolden, representatives from Ferrari-Carano Vineyards in Sonoma, and winemakers from St. Francis Winery and Vineyards in Napa Valley.

Three distinct “Jewish Heritage” theme voyages are also on offer, and will take place this summer and fall. Designed to highlight the rich Jewish heritage along the Danube, these voyages feature complimentary heritage tours, including synagogue and museum tours, as well as visits to relevant Jewish districts and landmarks of historic significance. One such highlight is a visit to the world’s second-largest Synagogue: the Dohany Street Synagogue in Budapest.

In Nuremberg, passengers will have the opportunity to visit the historic Courtoom 600, housed within the Nuremberg Palace of Justic. Here, the Nuremberg Trials were carried out in 1945-46, which tried 24 of the highest-ranking leaders of Nazi Germany, and several key architects of the Second World War.

In Regensburg, time is made to visit the house of Oskar Schindler, the German Industrialist credited with saving roughly 1,200 Jews during the Second World War. He was the subject of the 1993 Steven Spielberg movie, Schindler’s List.

Onboard enrichment activities for both theme voyages are complimentary and open to all passengers wishing to participate.

When asked about the decision to create these two immersive experiences, AMAWATERWAYS President Rudi Schreiner noted: “We’ve designed these specialized itineraries to showcase the centuries-old traditions and heritage of Europe. Our team has worked very hard to provide a number of exclusive opportunities to enrich the river cruise experience for our passengers taking part in these cruises.”

For more information on AMAWATERWAYS, be sure to check out our detailed company and fleet overview.