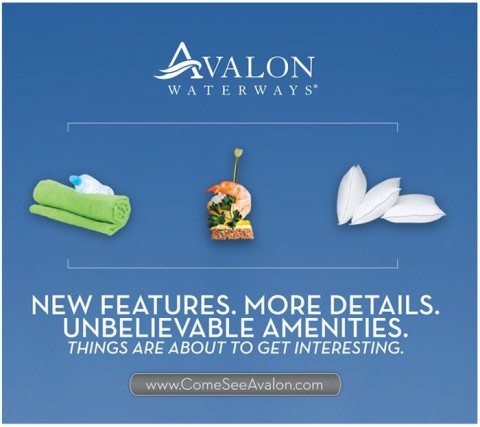 In order to make its newest ship stand out from the crowd, Avalon Waterways had to rethink the way river cruising is marketed.

“Looking at how the category markets river cruising, we saw the sameness and similarity,” said Jennifer Halboth, marketing director for the Globus Family of Brands, which owns Avalon. “There’s a real traditional formula to the marketing of river cruising, and it involves a deck, some European scenery and some Chardonnay.”

River cruise ads traditionally portray a river cruise ship gliding past picturesque European cities or images of passengers on board, making it difficult for companies to differentiate themselves and their products.

A passenger trying to choose between one river cruise company and another is going to ask “’How is my experience on the Danube with you going be different from my experience with someone else?’” said Halboth.

In order to answer that question, Avalon decided it would try to separate its product from the pack by putting the focus on its fleet, most specifically its newest ship, the Avalon Panorama, which is launching in May 2011.

The Avalon Panorama differs from Avalon’s existing ships in that it will feature 64 newly-designed, 200-square-foot suites on the top two decks. Each suite will have a seating area adjacent to an 11-foot wide, floor-to-ceiling, wall-to-wall panoramic window, with the idea of converting the entire suite into a sort of open-air balcony.

Avalon employed a new design team to enhance the Panorama’s interior, which includes marble bathrooms, new Avalon-branded bedding called Comfort Collection by Avalon and love seats in the suites. There will be fresh flowers in each stateroom and L’Occitane body products.

In an attempt to create buzz and excitement about the new ship, Avalon put out marketing messages like “our newest ship just became Europe’s latest attraction” and “when you build a ship that has everything, it makes for a vacation that does too.”

The dominant image of the campaign is just of the ship itself, with no backdrop, which is a departure from the standard image of a ship in the distance floating along an iconic European river.

“We just didn’t want to come out with another ship announcement,” said Steve Born, vice president of marketing for Globus. “This was an opportunity for us to tell our story.”

According to Born and Halboth, putting greater emphasis on the ships has been a strategy Avalon has been building up over time.

“Before we even got to this campaign, we’ve been full frontal,” said Halboth, adding that Avalon has invited passengers to “ look at every nook and cranny of our ships” with the virtual ship tours it has available online of four of its ships, the Avalon Poetry, Tranquility, Scenery and Panorama.

But with the Panorama, Avalon said it kicked it up a notch.

Avalon created a web page, www.avalonwaterways.com/inspired, devoted to marketing, among other things.

But the big push was about more than just Avalon, it was about the increasing competition in the river cruise market overall.

Indeed, as U.S. river cruise operators gear up for 2011, a year when most of them have new ships launching, competition is heating up, and other operators are also beefing up their marketing messages.

Uniworld Boutique River Cruises, for instance, is also investing heavier in marketing for 2011.

“Our marketing 2011 budget will be quite a bit bigger than 2010 based on new capacity and everything else we’re trying to achieve,” said Uniworld President Guy Young.

Uniworld’s strategy to separate itself from the other guys is placing emphasis on its ships boutique designs, a product of partnering with sister company Red Carnation Hotels.

“In recent years, the renowned Red Carnation Hotels’ design team has personally overseen every detail of our ships, to create stunning, welcoming interiors, as remarkable as the sights you’ll see on your travels with Uniworld,” Uniworld stated in a recent ad.

With its push to be identified as the “boutique cruising” operator, Uniworld, like Avalon, has also shifted some of the attention off the destinations and onto its fleet and what separates Uniworld ships from the competition’s.

As Young stated, the increased marketing efforts are related to the new capacity Uniworld has on the market.

In addition to launching a new ship in Egypt at the end of 2009, the River Tosca, and a new ship in Europe this year, the River Beatrice, Uniworld has three new ships entering the market next year — the River Antoinette, sister ship to the River Beatrice, which will begin sailing Uniworld’s Castles along the Rhine itinerary in March; the Duoro Spirit in Portugal, which Uniworld will be chartering instead of the Duoro Queen; and the River Victoria, a refurbished ship in Russia on which Uniworld will have a five-year charter.

Viking River Cruises too has a lot on the line, having announced earlier this year that it plans to build eight new ships in the next three years.

Torstein Hagen, chairman of Viking, said that Viking no longer wanted to produce ads that benefited the entire river cruise segment by marketing the overall river cruising experience. He said that Viking would embark on an ad campaign that would set Viking apart.