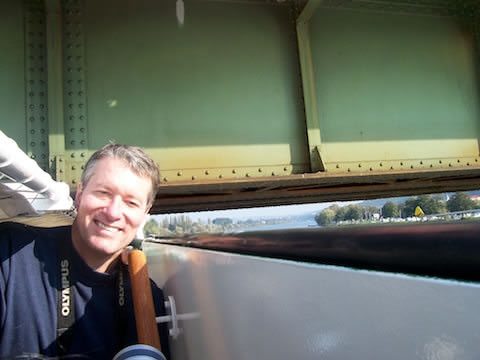 “Attention ladies and gentlemen. We are approaching a very low bridge, and we kindly ask that you vacate the Sun Deck until we have passed.”

Welcome to river cruising in Europe, where the experience is unlike any other you’ve ever encountered.

Floating down the Moselle River toward Germany’s border with Luxembourg and France, Peter Deilmann River Cruises’ Heidelberg is passing under a bridge — a low bridge. The crew moves to remove not only all tables and deck chairs from the Sun Deck but also the side railings, and even the captain’s pilot house must be lowered so that it is flush with the upper deck.

With the bridge only 100 yards away, I squeeze my head through a canopy draped over the stairwell to the Sun Deck, completely flush except for the captain’s bald crown poking above the deck from the pilot house.

We make it under with only two inches to spare. “The captain has been with us a very long time,” jokes Wilhelm Bahrs, Heidelberg’s affable hotel manager. When I fail to get the joke, he rubs his head to indicate that the low bridges have scraped the captain’s noggin bare.

Cruising Europe’s rivers is a relatively new phenomenon that began in 1992. The completion of the Main-Danube Canal that year meant that river cruisers could travel, via locks, from the North Sea to the Black Sea, opening up 2,200 miles of river through 13 countries, and allowing itineraries from Amsterdam to Budapest.

The manmade channel crosses the Franconian Alps to link the Main and Danube rivers. Transiting the canal, river vessels cross Europe’s Continental Divide, which requires a series of locks to lift the ships approximately 1,400 feet above sea level.

A bit less than 40 feet wide, the canal’s locks restrict the width of river cruisers, which are essentially barges with rooms and other amenities above. River cruisers are, in fact, little more than floating hotels.

On the Danube during a Christmas Market’s cruise in December, AMAWATERWAYS’ Amadagio cruised between destinations during the night and spent much of the daylight hours docked in cities and towns.

Uniworld’s River Empress overnights in Budapest and in Passau at the beginning and end of its Danube cruises and sails between destinations during the daylight hours and overnight.

Both approaches allow for dinners ashore and late-evening strolls into town. And both beat motorcoach tours of Europe hands down. On river cruises, you pack and unpack only once; there’s no need to get up at unspeakable hours in the morning to board a bus for the next destination. You and your hotel cruise along together.

Europe has more navigable rivers than any other region in the world — and arguably more diverse cultures along its river banks than any place else. A cruise along the entire length of the Rhine and Danube rivers exposes travelers to 10 countries in Eastern and Western Europe.

First-time river cruisers typically begin with the Danube, according to Rudi Schreiner, president of California-based Amadeus Waterways, founded in 2002. “The Rhine River seems to be one river that is mentioned worldwide,” he says, “but the majority of cruises in Europe actually take place on the Danube.”

You may be familiar with the names of some of the cities along the Danube: Budapest, Hungary; Vienna, Austria; and Passau, Germany.

“With the Moselle and Rhine river towns, however, even some Europeans are not familiar with the names,” Schreiner says. “So the typical first-time cruiser goes on the Danube, sees the beauty there, then wants to go on other rivers: the Moselle, the lower Danube, and to Holland and Belgium for tulip cruises in the spring.”

Of course, you can always opt for the grand tour of Europe, cruising from Amsterdam to Budapest — and beyond. Along the way, you’ll look out on charming villages, storied cities, fairy tale castles, vineyards and the slow pace of life along the river — all from your floating hotel.