The Rhine, Windmills and Viking Baldur 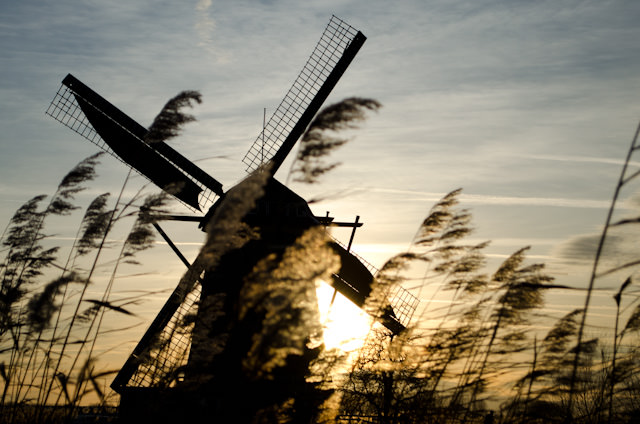 Touring the windmills of Kinderdijk, Netherlands as our journey along the Rhine aboard Viking Baldur wraps up. Photo © 2013 Aaron Saunders

Today, guests aboard Viking Rivers’ Viking Baldur spent a relaxing morning on the Rhine, en-route to our final port of call on this weeklong itinerary, in Kinderdijk, Netherlands. 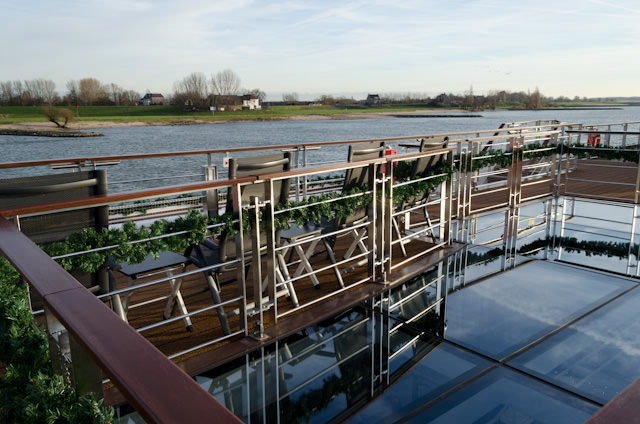 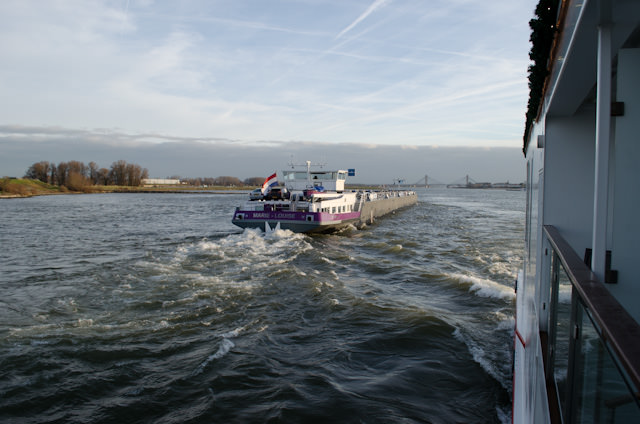 Our journey was an inspiring one, filled with unusually sunny weather for the Netherlands. Town after town would rise up on our bow and fall astern, and at some points the river widened such that it felt as if you were on an oceangoing ship. There was a rumor we’d be able to catch a glimpse of the yacht Steve Jobs had commissioned before he died in 2011, but sadly, I never saw it.

Still, I took in enough beautiful sights to last a lifetime before our arrival in Kinderdijk at Noon sharp. 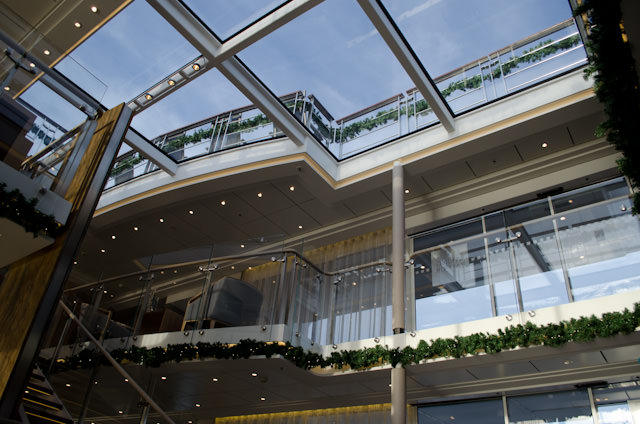 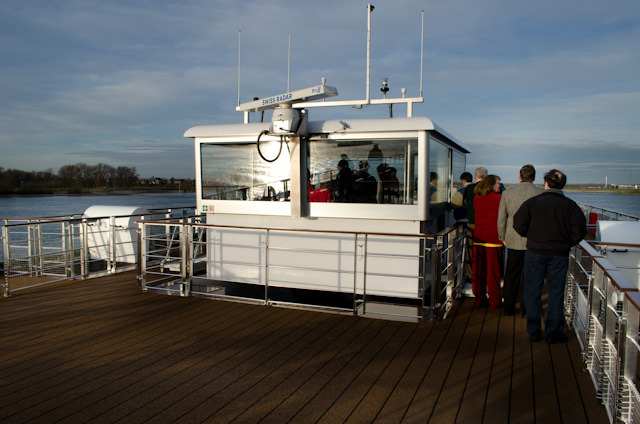 Passengers congregate on the Sun Deck for a look inside the Viking Baldur’s weelhouse. Photo © 2013 Aaron Saunders 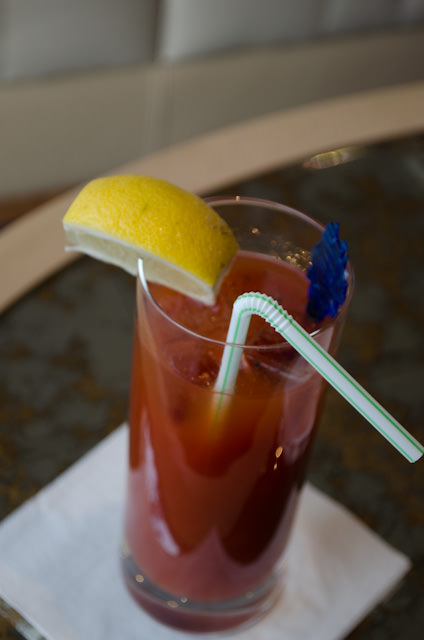 Viking Baldur’s friendly bartender, Roman, convinced me to try one of his signature Bloody Mary’s during our scenic sail. I was not disappointed! Photo © 2013 Aaron Saunders 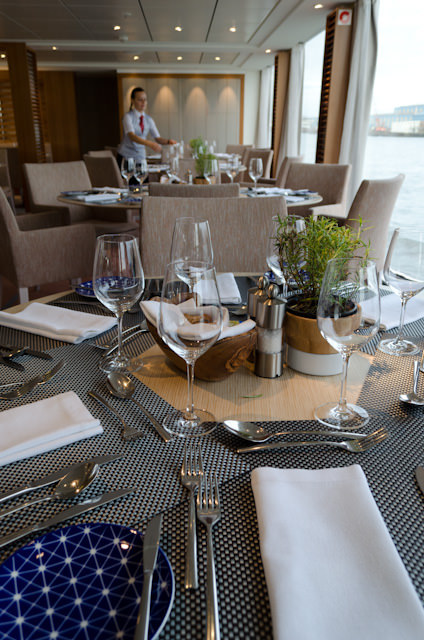 Preparing for lunch in the Restaurant onboard Viking Baldur on Monday, December 16, 2013. Photo © 2013 Aaron Saunders

The town of Kinderdijk – which means “Children Dike” in Dutch – is situated about 15 kilometres from Rotterdam. The town itself is quite small, with only a few dozen buildings and essential shops to its name. So you might wonder, then, why Viking Baldur is spending the afternoon here instead of steaming for an evening arrival in Amsterdam, our final destination on this weeklong journey up the Rhine from Basel, Switzerland.

The answer lies in the wind. 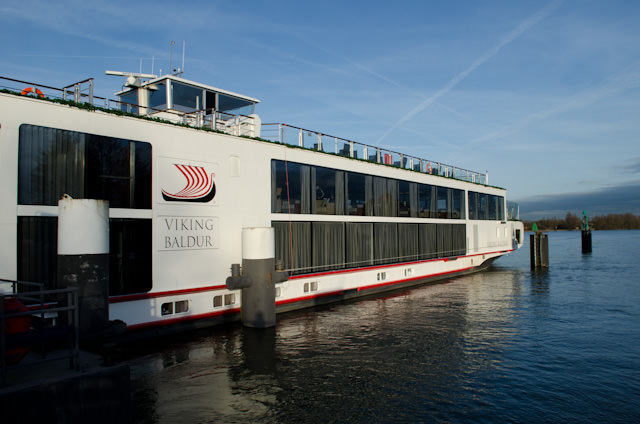 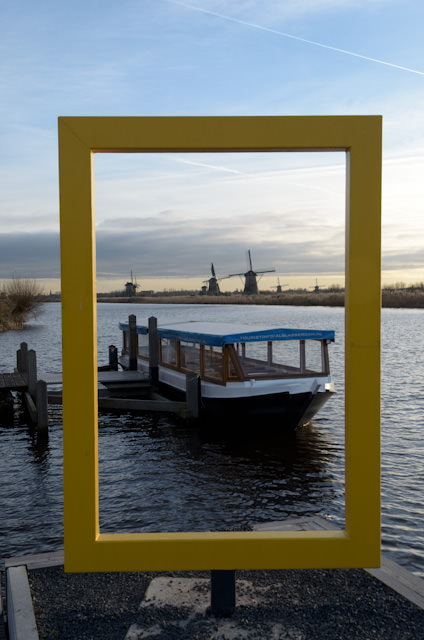 The windmills of Kinderdijk. As you might imagine, they’re a National Geographic cover come to life. Photo © 2013 Aaron Saunders

Kinderdijk boasts 19 historic windmills that were constructed in the mid-1700’s in order to drain the polder near the confluence of the Lek and Noord rivers. It’s the largest collection of these windmills still in existence in the Netherlands, and a UNESCO World Heritage site. 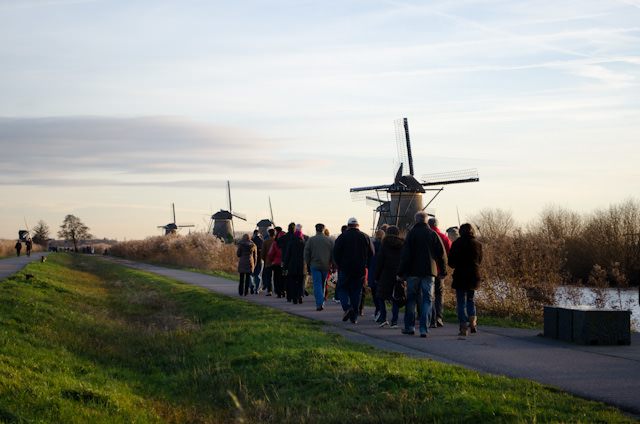 Guests from Viking Baldur stroll towards the windmills of Kinderdijk on their guided tours in the late afternoon. Photo © 2013 Aaron Saunders

That’s the textbook definition. In reality, it’s tough to imagine becoming enamoured with these structures – until you see them in person. For better or worse, windmills are as synonymous with the Netherlands as Gouda cheese, genever and wooden shoes. When you catch your first personal glimpse, it is as if time stands still. 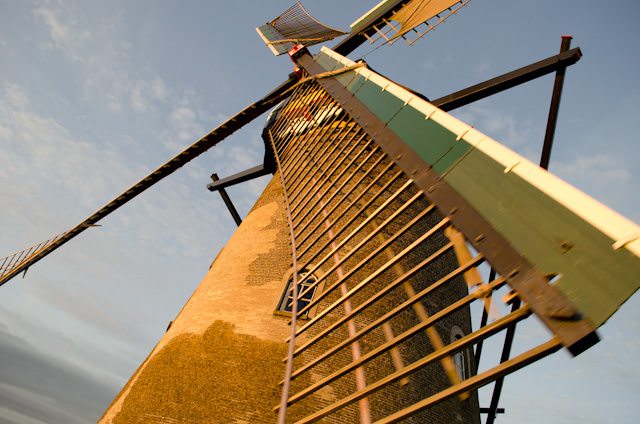 The windmills are quite ingenious in their design and construction, and in very typically Dutch fashion, were built to solve a very practical problem: how to prevent the lowlands of the country – some of which are situated roughly 20 metres below sea level – from flooding.

The solution, of course, was to create windmills that would siphon water up from a polder and deposit it into another area. 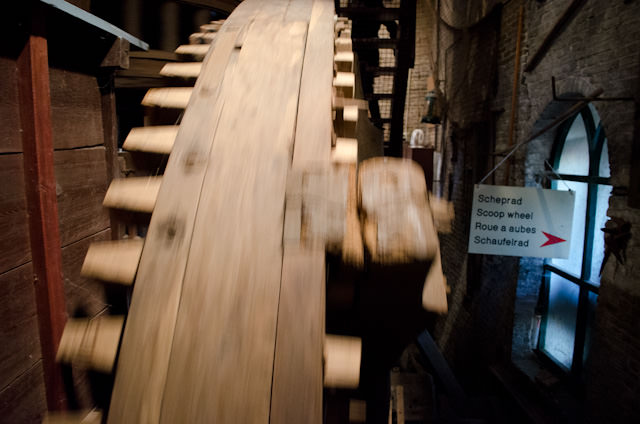 The innerworkings of a mill involve massive gears and shafts. Photo © 2013 Aaron Saunders

In the early days, people lived in these windmills in rather primitive conditions; some didn’t even have indoor plumbing until the 1980’s. But now, being a miller has a certain prestige attached to it, as there are less than 1,000 working mills left in the country. This change has come about recently, thanks to the introduction of motorized mills that can move almost ten times as much water as a traditional windmill in a single hour. 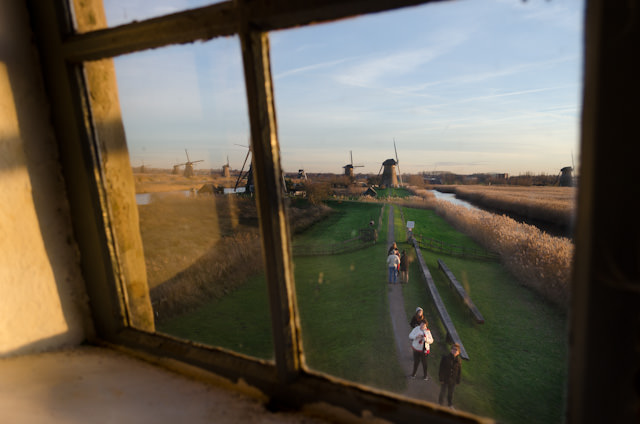 Looking out from one of the many mills in Kinderdijk. Photo © 2013 Aaron Saunders

This evening, we were able to enjoy a picturesque sunset stroll to the windmills of Kinderdijk, and even step inside to see how one works.

I have had several readers (and even some guests here) ask whether I prefer the Rhine to the Danube, either at Christmas or during the regular river cruising season. It’s not an easy question to answer, but I will try my best to do so tomorrow. 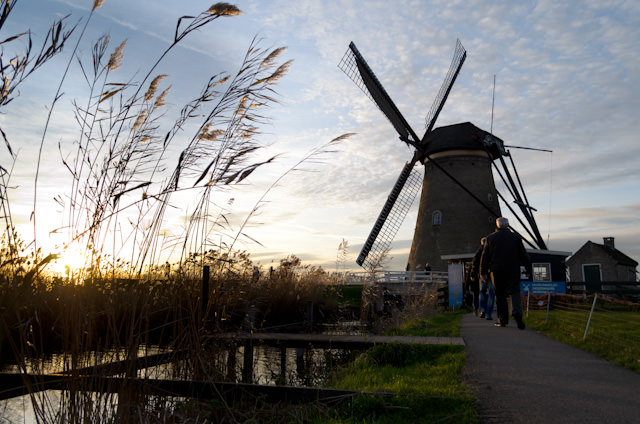 I don’t normally like endings, but I feel that this Rhine journey had the best end to any river cruise I have been on. Compared to the hustle and bustle of Cologne, Kinderdijk was calm and serene as we strolled back to the Viking Baldur. Only the rustling of the bushes in the wind and the occasional whump-whump-whump of the turning mill blades could be heard; sounds that were punctuated by the sun, which was setting for the last time on our European Christmas journey. 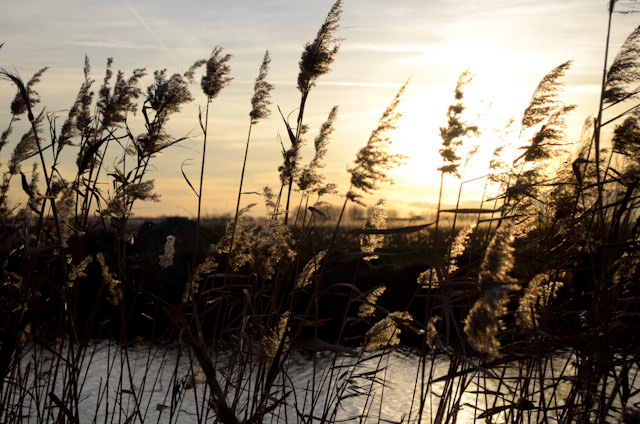 Our late afternoon in Kinderdijk was made all the more spectacular by the sun which, just shy of 4 p.m., was setting. Photo © 2013 Aaron Saunders

It was as haunting and beautiful as I could possibly imagine. It’s the kind of setting lovers would want to stroll through; the kind of evening that you only see in movies and wonder how much computerized trickery was needed to make it come to life. 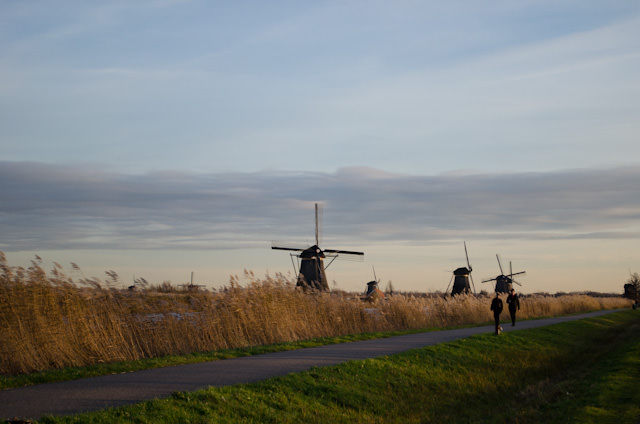 The idyllic Dutch countryside at its finest. Photo © 2013 Aaron Saunders

I could have actually just stayed in Kinderdijk. Now, I have no idea how that would have worked out (poorly, I’d suspect), but such is the seductive power of the Netherlands; a country I have long admired and respected for the kindness of its people and the richness of its culture. 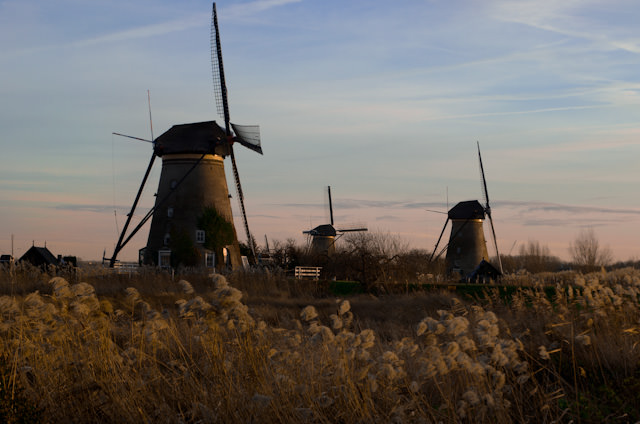 I can’t think of a better way to end our week aboard Viking Baldur. But, as the Europeans would say, it’s not really goodbye for good, is it? More like, ‘see you later.’ 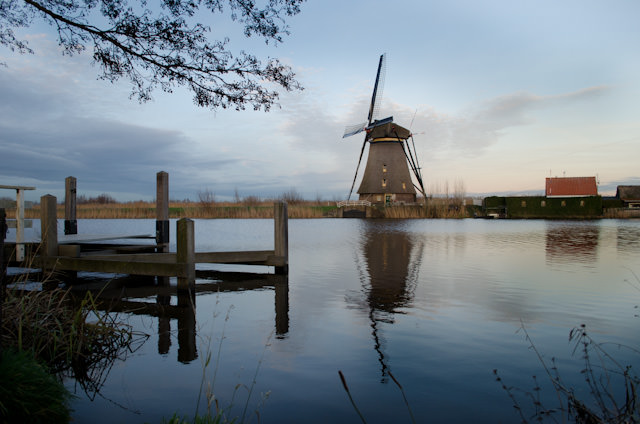