Christmas in Cologne aboard Viking Baldur 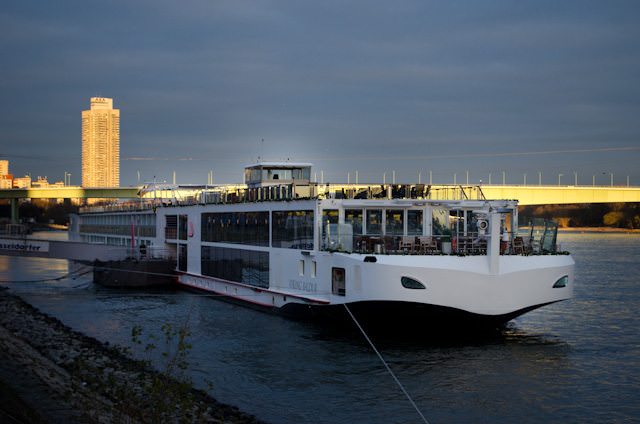 Viking Baldur alongside in Cologne on the last German stop of our Rhine itinerary.Photo © 2013 Aaron Saunders

Today, Viking Rivers’ Viking Baldur arrived just after 9 a.m. in the city of Cologne, passing near the shadow of the towering Cologne Cathedral, or Dom, which remains one of the city’s most instantly-recognizable (and admired) landmarks. 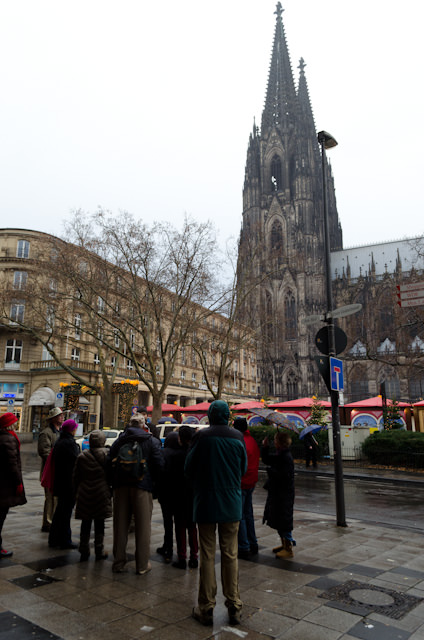 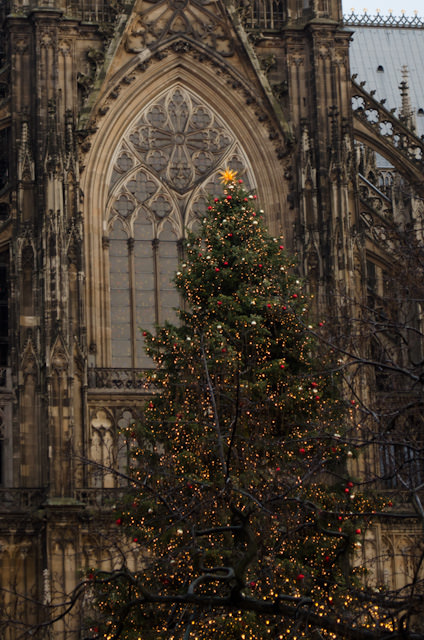 Aside from sparing the Cathedral, much of Cologne was completely destroyed by Allied bombing raids during the Second World War. Unlike Nuremberg, which was for the most part painstakingly rebuilt brick-by-brick, Cologne replaced historic buildings with unappealing concrete structures during the postwar years.

But Cologne (or Koln, in German), has more to offer than just the famous Cathedral, which was built between 1248 and 1880. Cologne has a Chocolate Museum; a Carnival Museum; even a Mustard Museum. This morning, an included Walking Tour got us oriented directionally and historically with Cologne, and after two hours, we were turned loose on the city to do as we pleased. 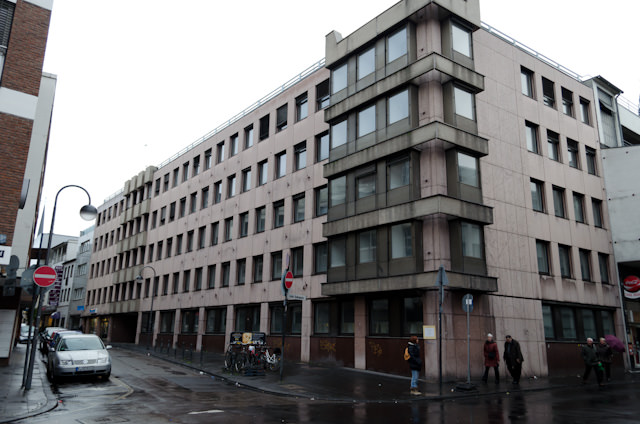 Much of Cologne was destroyed during the Second World War, leaving bland, postwar architecture in its place. Photo © 2013 Aaron Saunders

Our berth today was the farthest away from the Cathedral that I could see, yet the Cathedral and the Christmas Markets were only a pleasant, 20-minute waterfront walk from the Viking Baldur. If you didn’t want to stroll along the Rhine, a series of shuttle busses would traverse the distance between the ship and the Cathedral almost every hour on the hour this afternoon. 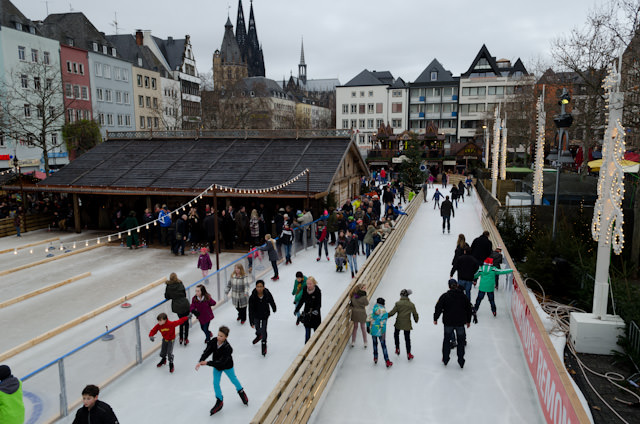 Much like the name suggests, this market was styled as a traditional old world Christmas Market, with booths made of expensive woods and featuring lit hearts that illuminated trees, not to mention a variety of unique goods, foods, and drinks.

There was also an ice skating rink available for use by those of all ages, and a nearby Gluhwein booth if that wasn’t your thing. But I stopped to sample some handmade French Fries with Garlic topping, as well as some homemade potato chips. Saying they were to die for is putting it mildly. 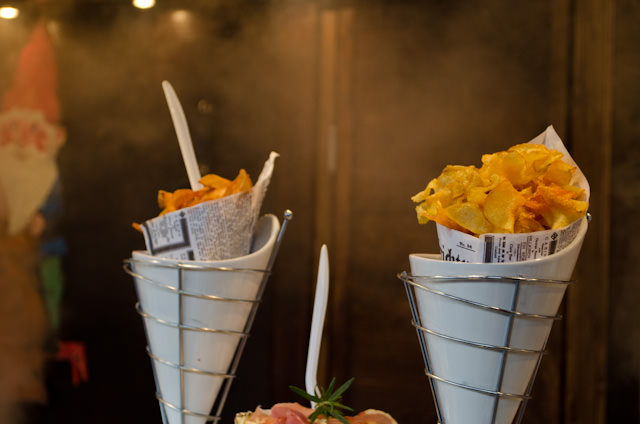 After that, a quick ten-minute walk up Cologne’s pedestrian-only Shildergasse took us to the Neumarkt square, and what I personally feel is the best Christmas Market in the city.

The Markt der Engel – or Market of Angels – is a sprawling Christmas Market decked out with white booths, white Gluhwein mugs, and even roaming, blonde-haired “angels” that intermingle within the crowd. The Gluhwein here was, in my opinion, the best I’ve tasted so far this trip, served up in white mugs sporting extruded artwork of angels and the Cologne cathedral, along with the year “2013” on the inside. 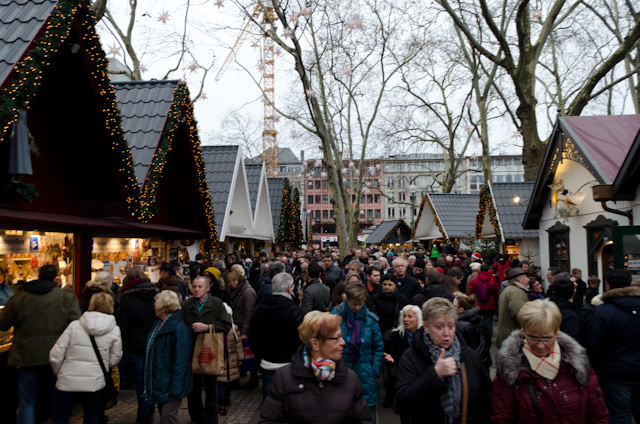 The wares here were also some of the most unique, ranging from wool and felt hats to candies, cheeses, meats, hand-carved pens, jewelry, and so much more. 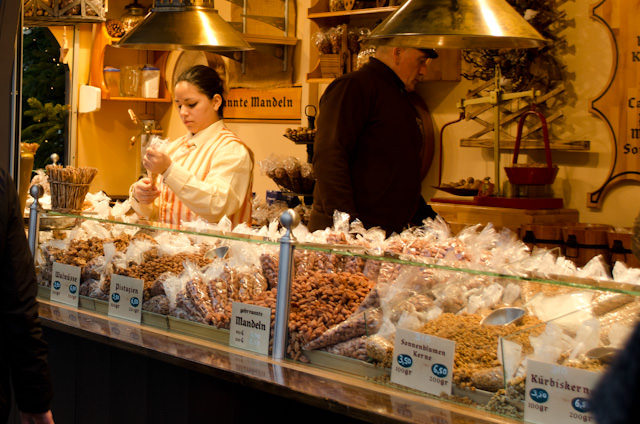 Almost every conceivable kind of traditional food is on offer at the Christmas Markets of Cologne. Photo © 2013 Aaron Saunders

The other market, the “Christmas Avenue”, is actually a Gay and Lesbian-themed market. It’s great that Cologne has such a market, and is very forward-thinking of them. There’s just one problem: it gets away from the quaint, old-world feel that makes the traditional markets so special and instead feels closer to something like a roving fair. 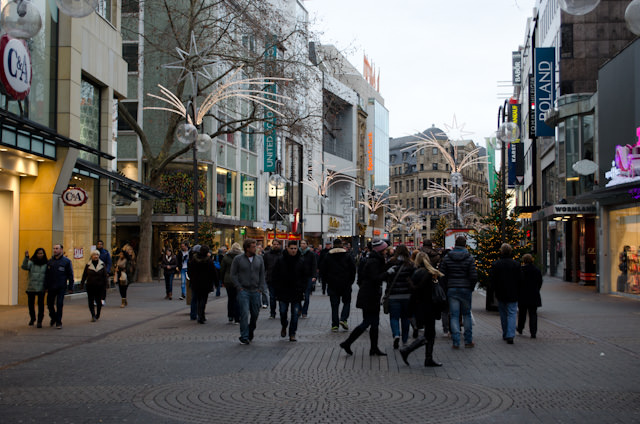 It’s Sunday, and all the stores along Cologne’s pedestrian shopping zone are closed. The crowds you see here are making their way from one Christmas Market to the next. Photo © 2013 Aaron Saunders

So, it was back to the other markets for one last Gluhwein. Our port call in Kinderdijk tomorrow won’t have any Christmas Markets or Gluhwein, so I felt the need to maximise my time.

It occurred to me that most of what I love about these markets is culinary, right down to the things I buy to take home. I love strong, salted black licorice, and I was able to purchase some made right here in Cologne today that has more salt content than the Dead Sea. They’re curiously good – but you can only eat about two at a time! 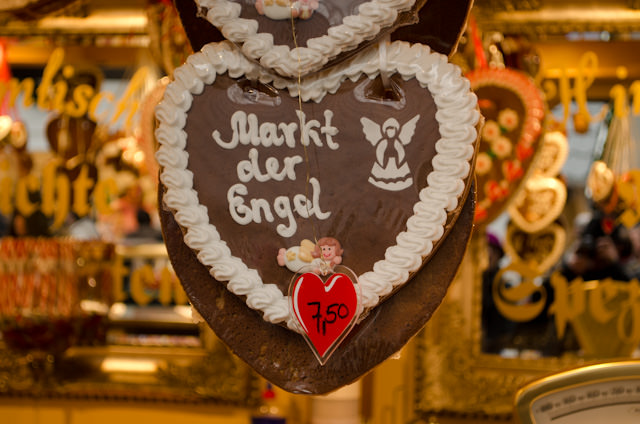 Apart from Strasbourg, today’s Christmas Markets in Cologne were among my favorites of this journey so far. Sure, they were so crowded for the most part that you could barely move, but they were unique, original, and above all else, different from one another. On the surface, Cologne is a cold, hard city filled with bland post-war architecture. But underneath the surface, Cologne is a welcoming, often humorous city steeped in tradition, and nowhere does that shine through more than at the city’s seven different Christmas Markets. 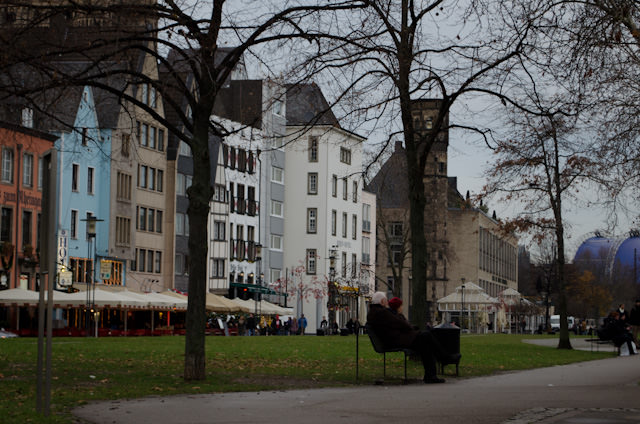 Strolling back to the Viking Baldur along Cologne’s Rhine promenade. Photo © 2013 Aaron Saunders

Tonight, as our time here onboard Viking Baldur winds to a close, we have to look ahead tomorrow to our first Dutch port of call of Kinderdijk. Unfortunately, that also means looking ahead to our early-morning arrival in Amsterdam the following day.

Program Director Anita Jaric outlined our entire disembarkation procedure this evening in the Viking Lounge in a comprehensive talk that covered everything from when luggage should be placed outside of staterooms to departure and transfer times from the ship. 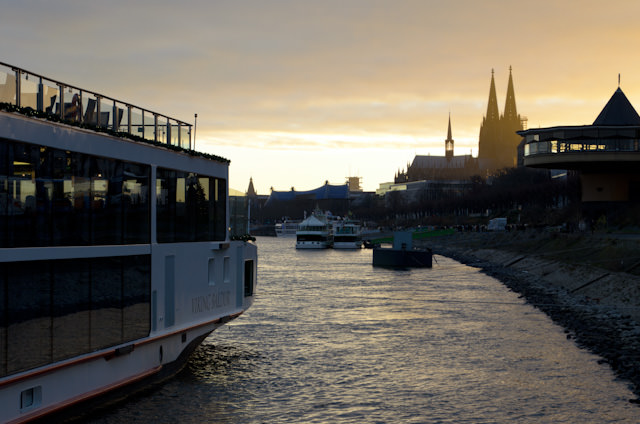 If I had it my way, I’d just stay onboard Viking Baldur for the return trip to Basel. Unfortunately, however, Tuesday will also herald the end of my voyage as I disembark and transfer to Amsterdam’s Schiphol Airport – at 4 a.m. sharp.

Yes, the joys of flight are very different from the simple, efficient pleasures here onboard the Viking Baldur. There’s check-in, security checks, passport and immigration controls, and more. My return flight with Lufthansa leaves Amsterdam for Frankfurt just after seven in the morning, where I will then catch a long-haul flight back across the Atlantic to Canada. 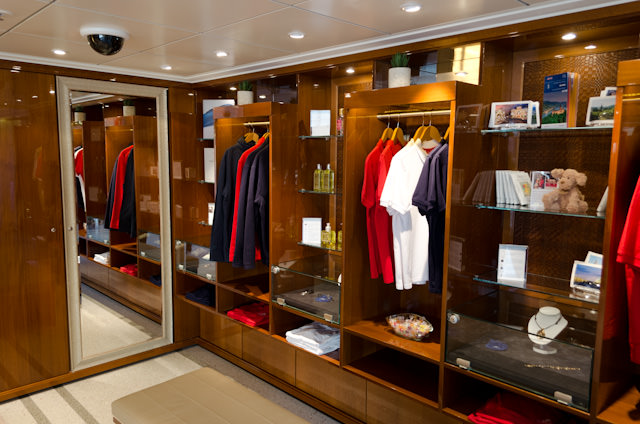 If you didn’t find what you were looking for at the Christmas Markets, Viking Baldur’s gift shop might hold the answer… Photo © 2013 Aaron Saunders 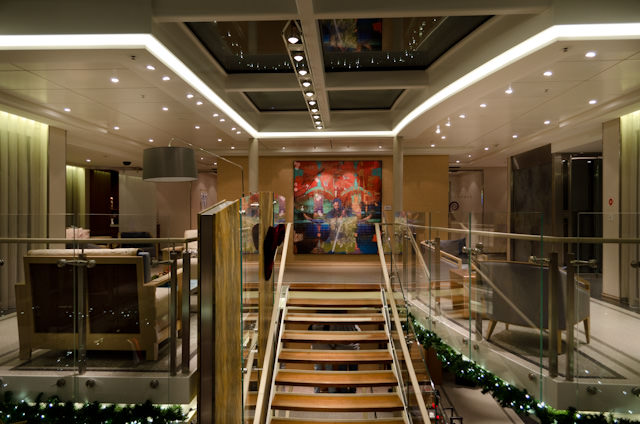 The Atrium aboard Viking Baldur this evening. Photo © 2013 Aaron Saunders 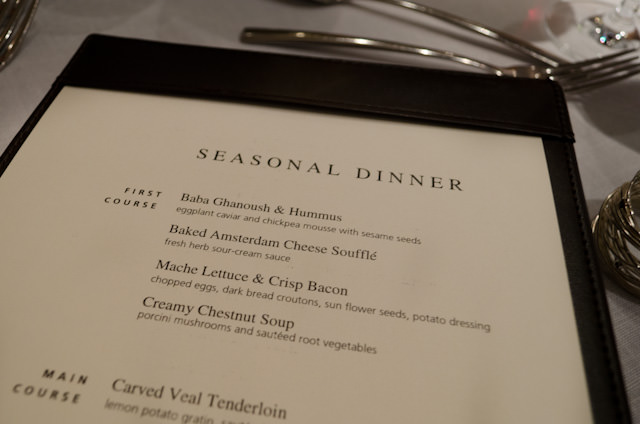 A portion of tonight’s dinner in The Restaurant. Photo © 2013 Aaron Saunders

This disembarkation talk is one of the most comprehensive I’ve had on any cruise line this year, and it has left nothing to chance. It’s a great aid in planning for a successful and easy transfer process, and because of that, I have to make a few decisions of my own.

Because of my early departure time Tuesday morning, I will be postponing my Kinderdijk report until I am back in Canada – or, perhaps, onboard one of Lufthansa’s FlyNet-enabled aircraft. Each post takes until roughly one in the morning to whip up, and two hours of sleep just won’t cut it on Tuesday. 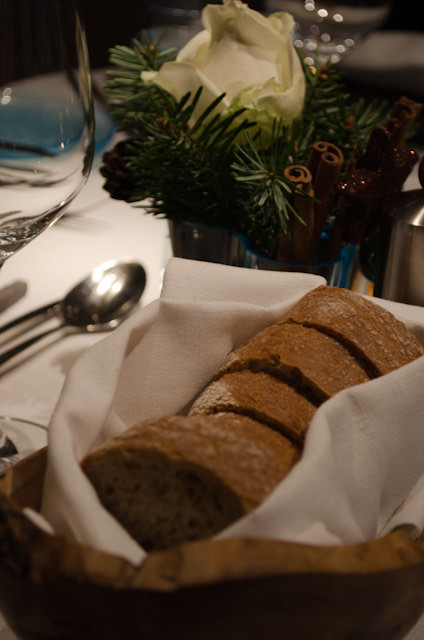 Fresh bread at dinner tonight. Along with the menu,even the bread changes nightly. Photo © 2013 Aaron Saunders

Most importantly, I want to enjoy my last evening here onboard Viking Baldur; a ship that continues to cement my love for Viking and the solid river cruise product they offer.

But I hope you’ll all tune in; there’s still plenty of adventure to be had as we explore the windmills of Kinderdijk and recap our fantastic Holiday journey along the Rhine aboard the sleek Viking Baldur! 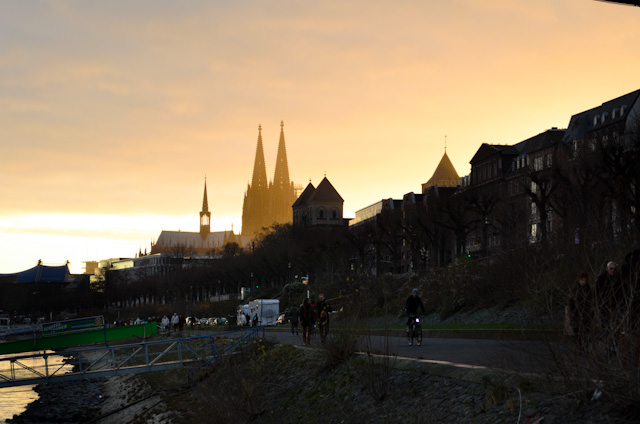